What Goes Around, Comes Around

The way immigrants, children, — babies! — are being treated in inhumane camps at the border of my country, in the heartland where they are afraid to come out of their homes lest they be snatched from their families — breaks my heart.
The Writer and I did not expect to be attending vigils and singing protest songs we sang in our teens again in our old age. 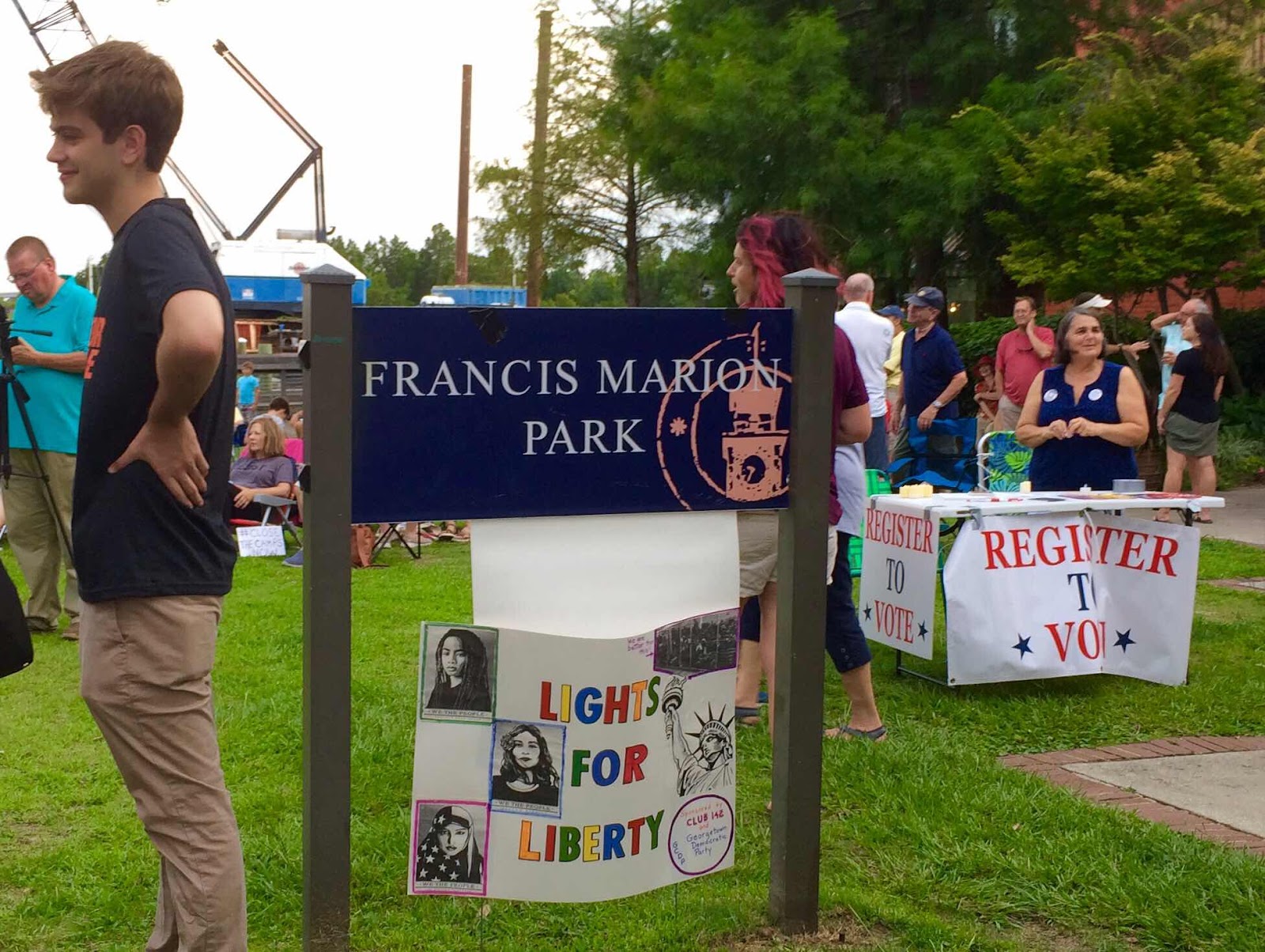 Earlier this month communities across the country announced candlelight vigils to show support for more humane treatment for asylum seekers from Latin America.

Georgetown (pop. 9000) is not a diverse community at all and for the most part doesn’t have much enthusiasm for outsiders (including those of us from north of the Mason Dixon Line!).  We wondered if we would be the only ones showing up in the park.  We were pleasantly surprised. 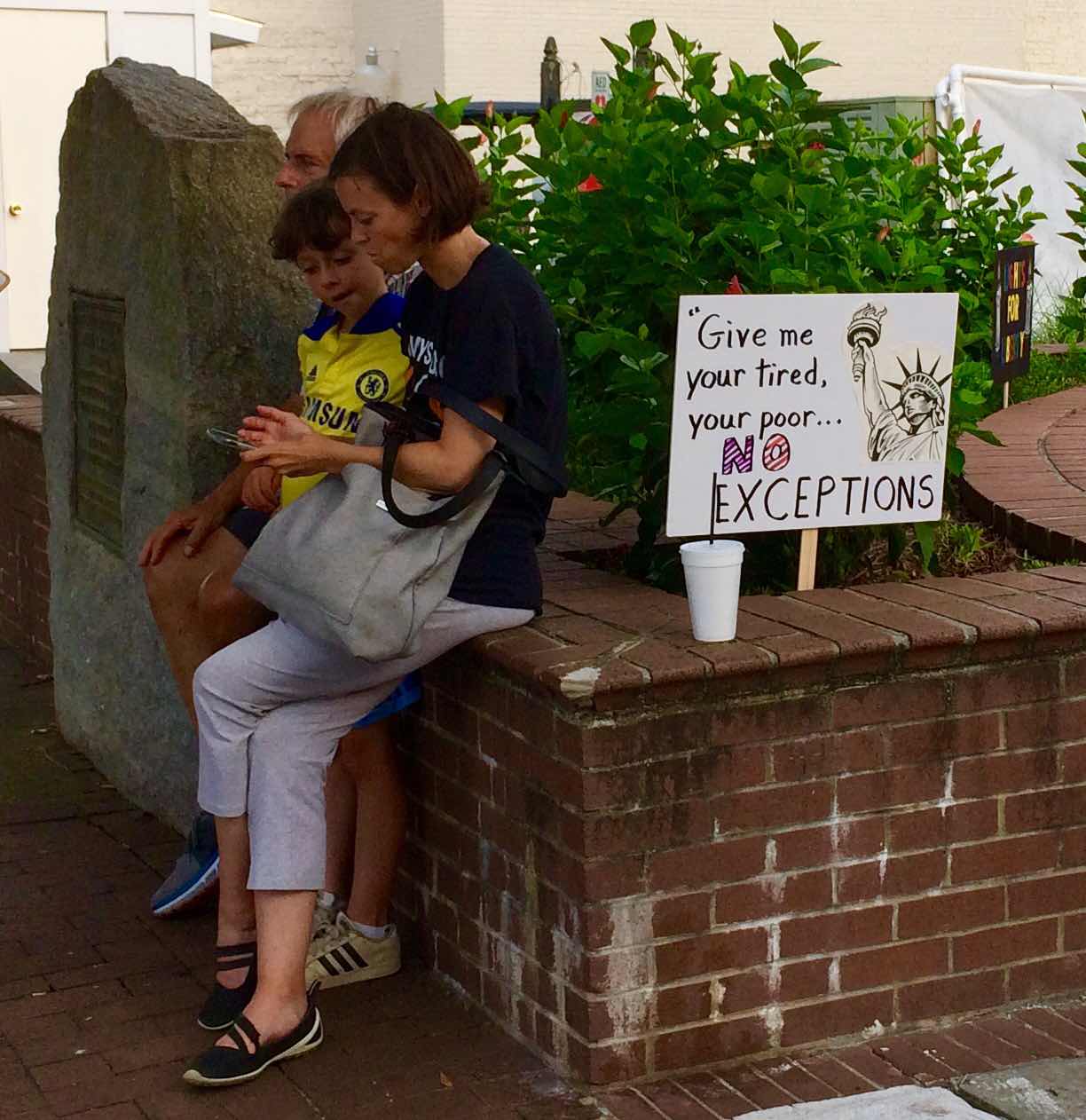 There were handmade signs ... 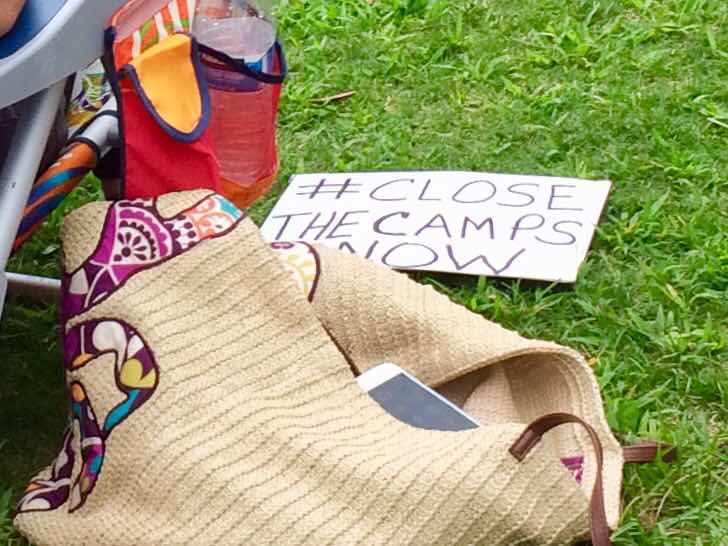 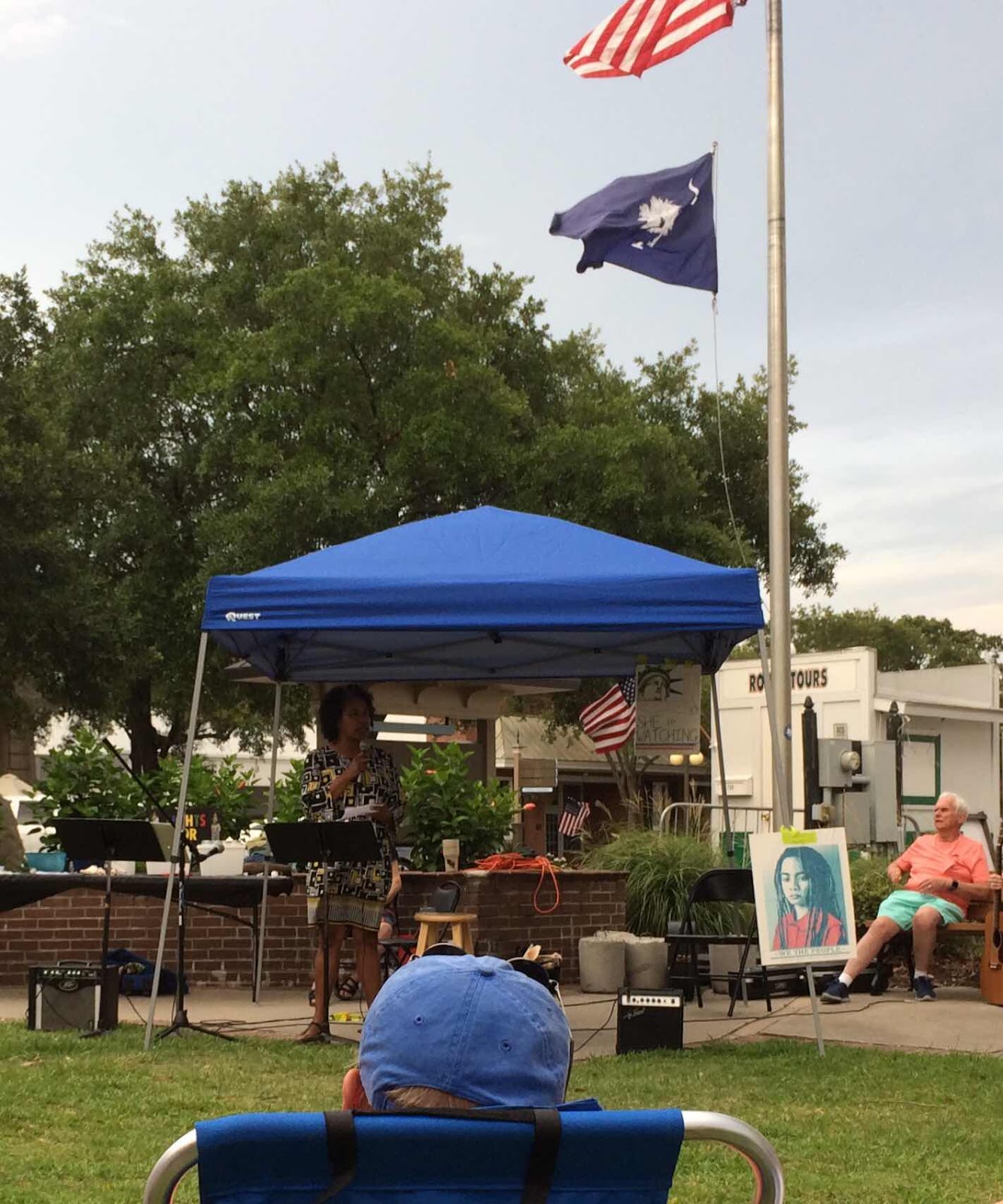 and speakers (including a Native American elder, a worried honor student - DACA recipient, a war refugee from Germany in the 1940s, a passionate and eloquent young Gullah woman (above), descendant of African immigrants who were forced into slavery), 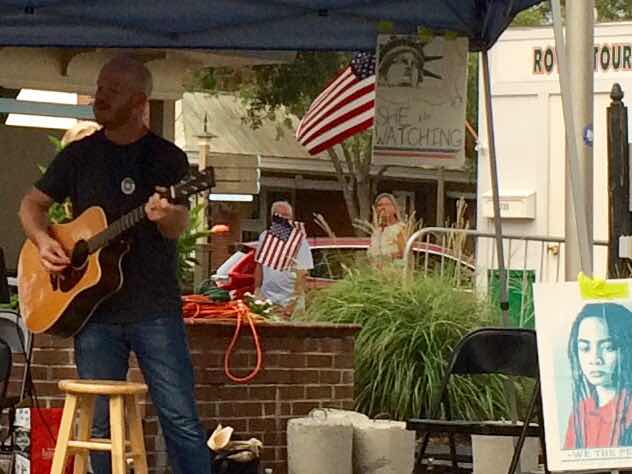 and musicians to lead us in songs for which some of us did not need the song sheets to remember all the words.
When is the last time you sang all the verses of This Land is Your Land, Blowin’ in the Wind or If I Had a Hammer?  For us ... oh, nearly 50 years!

Gallivants Ferry on the Little Peedee

Minnesota might have 10,000 lakes but I’m pretty sure more of the surface of South Carolina is covered with water than Minnesota’s is.  From the coast west, the land is covered with rivers and swamps that limit travel, isolating farms and communities.  Nowadays we zip over causeways and bridges to get from here to there, but those who were here in the 1700s and 1800s had to deal with the water at ground level.
Ferries were the only way to go. 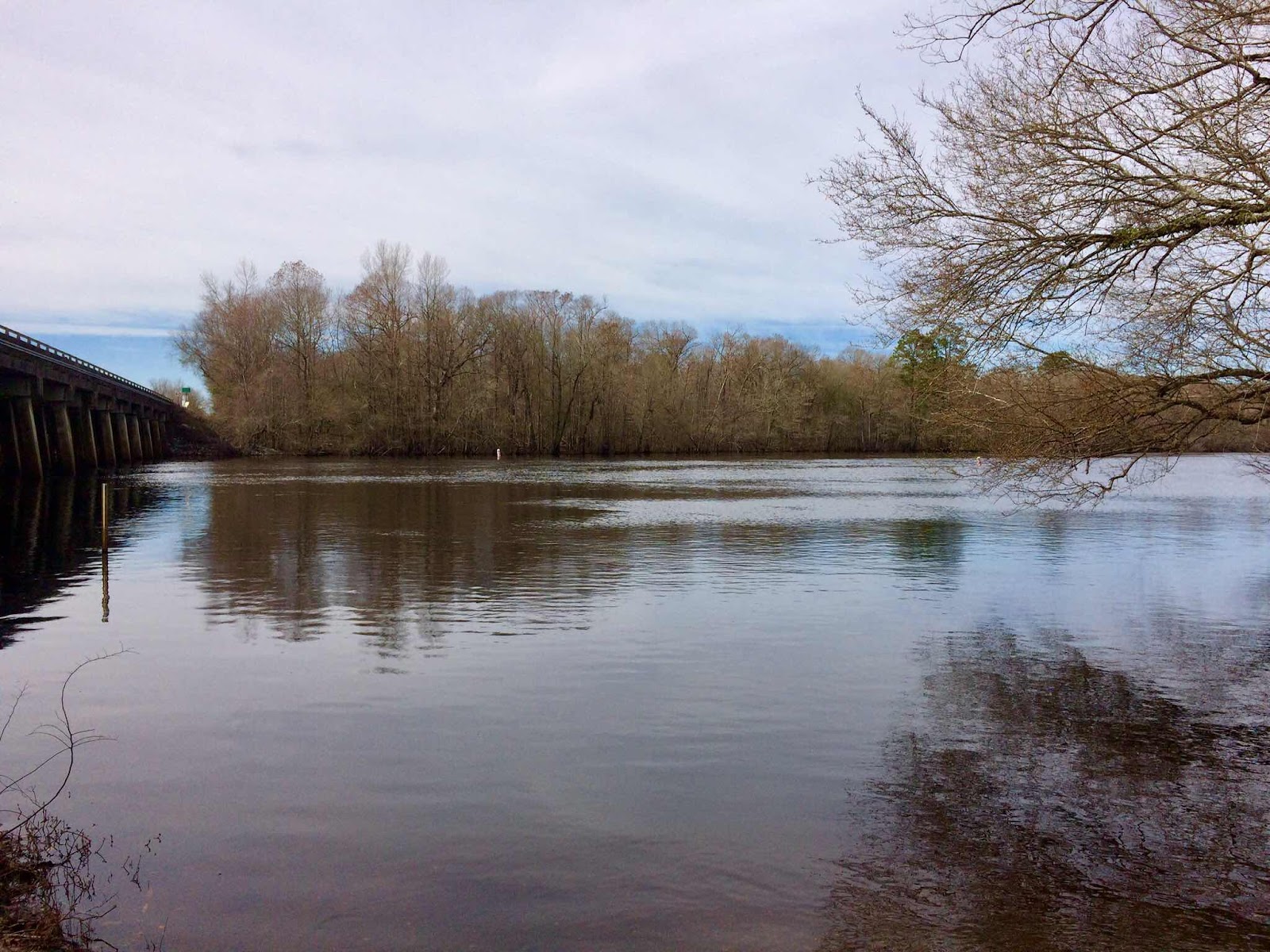 The Little Pee Dee River at Gallivants Ferry
The first ferries were simple flat-bottomed rafts or even canoes powered by paddles,
oars, or poles.  Poorly constructed, manned by those of questionable skill, they commanded expensive tolls.  After all, what choice did a traveler have? 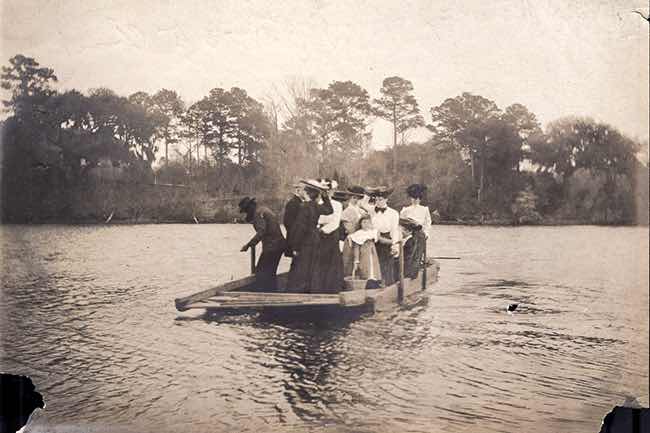 Over the years, larger flatboats capable of ferrying a carriage, wagon, or freight came into use, and a pulley or winch system was used to move the boat against the current (photo below).  Costs rose accordingly, and in 1805 the toll for a carriage or team and wagon was $1.00 and a man and a horse 12.5 cents.
Cooper River ferry. (University of South Carolina collection). 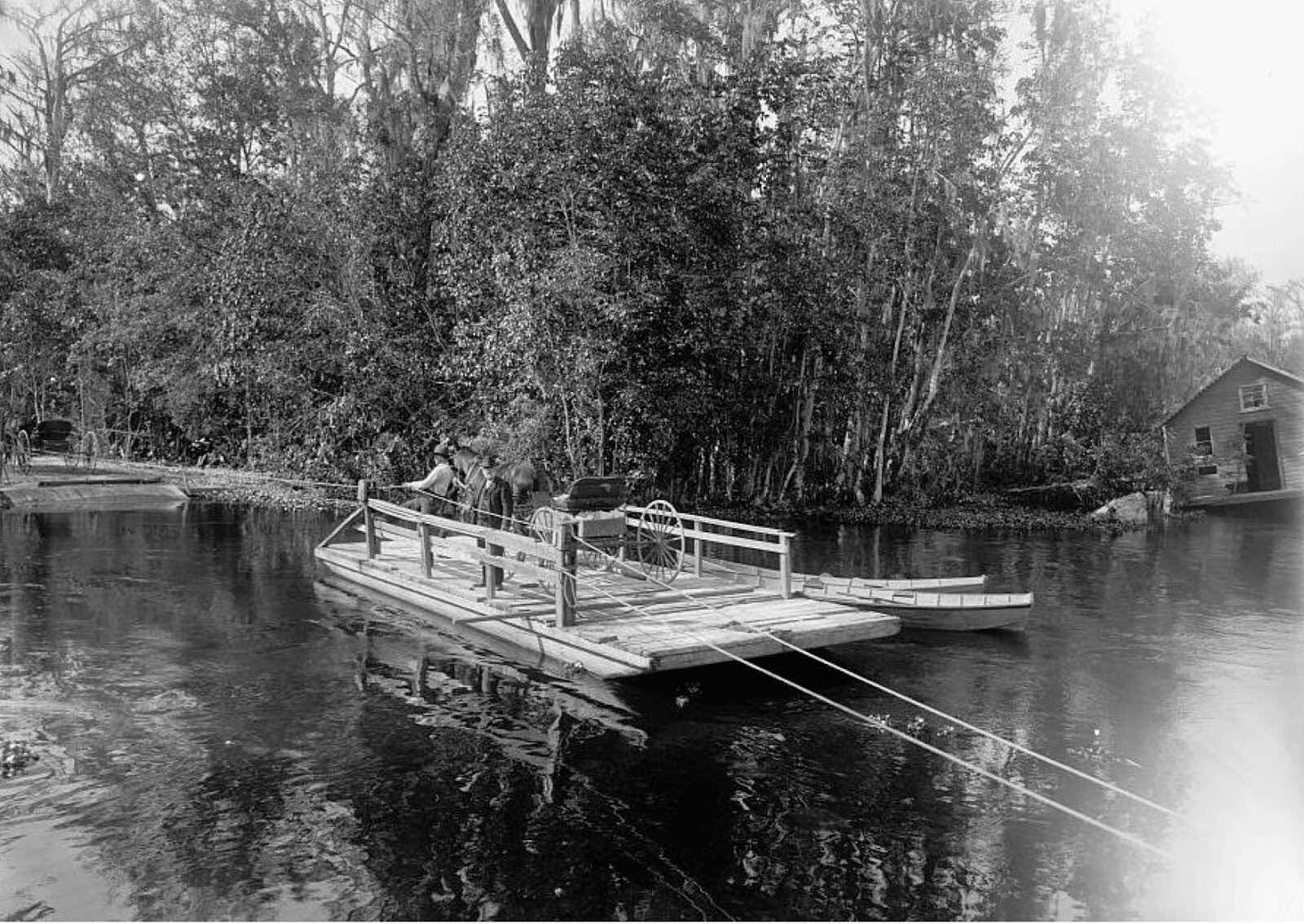 Catawba River SC (photo from American Civil War Forum)
Over time the location of a river crossing became a logical place to build a store ... a house ... an inn, and soon there would be a town, often named for the owner of the ferry business.
One of those places is Gallivants Ferry, west of Aynor on Hwy 501. A Mr Gallevans was granted the license to run the ferry there in 1795.  A store followed and the crossing became known by his name — sort of, as Gallevans apparently became Gallivants at some point. 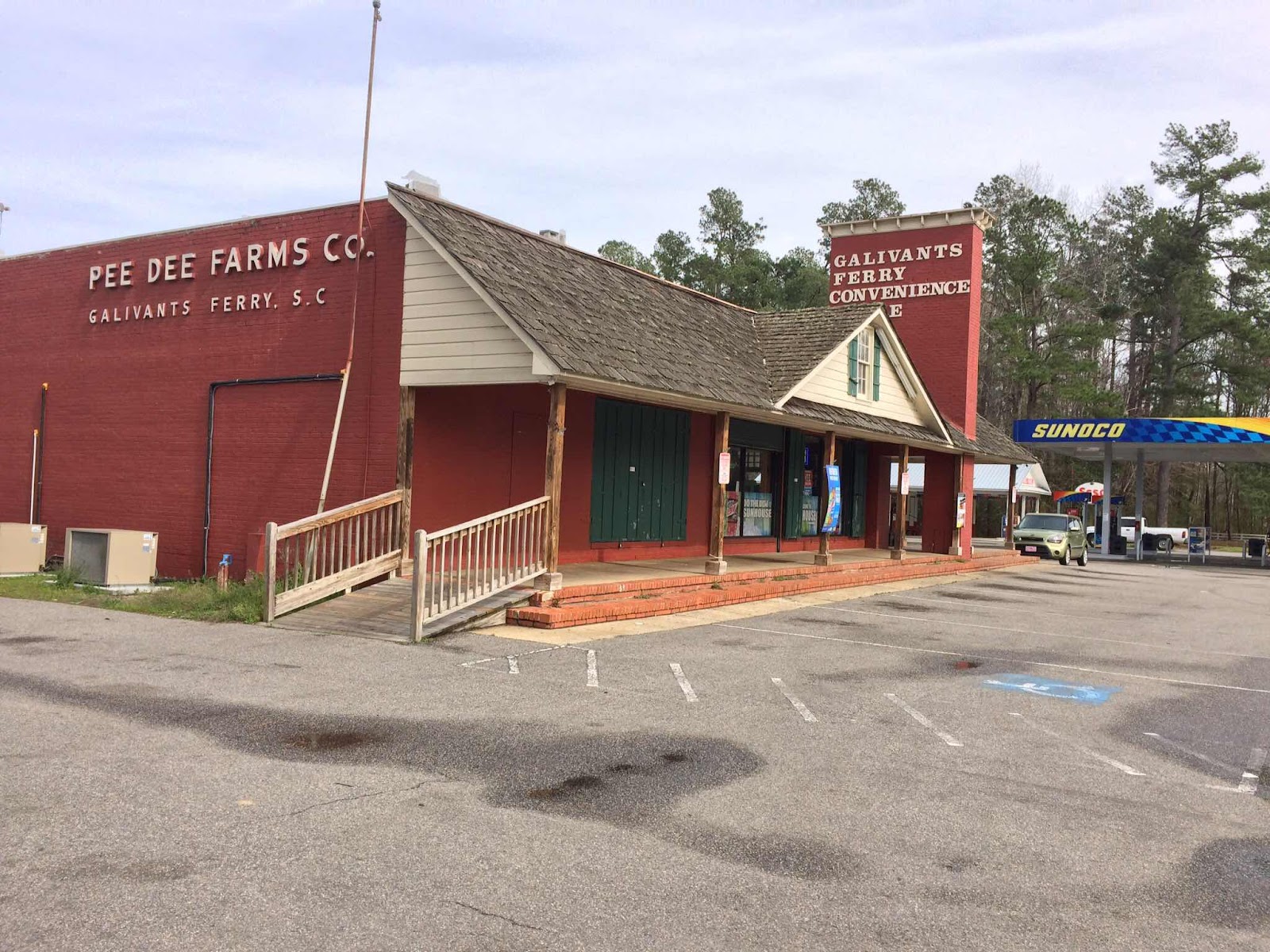 The store is still there today, as are other buildings that used to make up a community.  Happily, every building left today is preserved on the National Register of Historic Places. 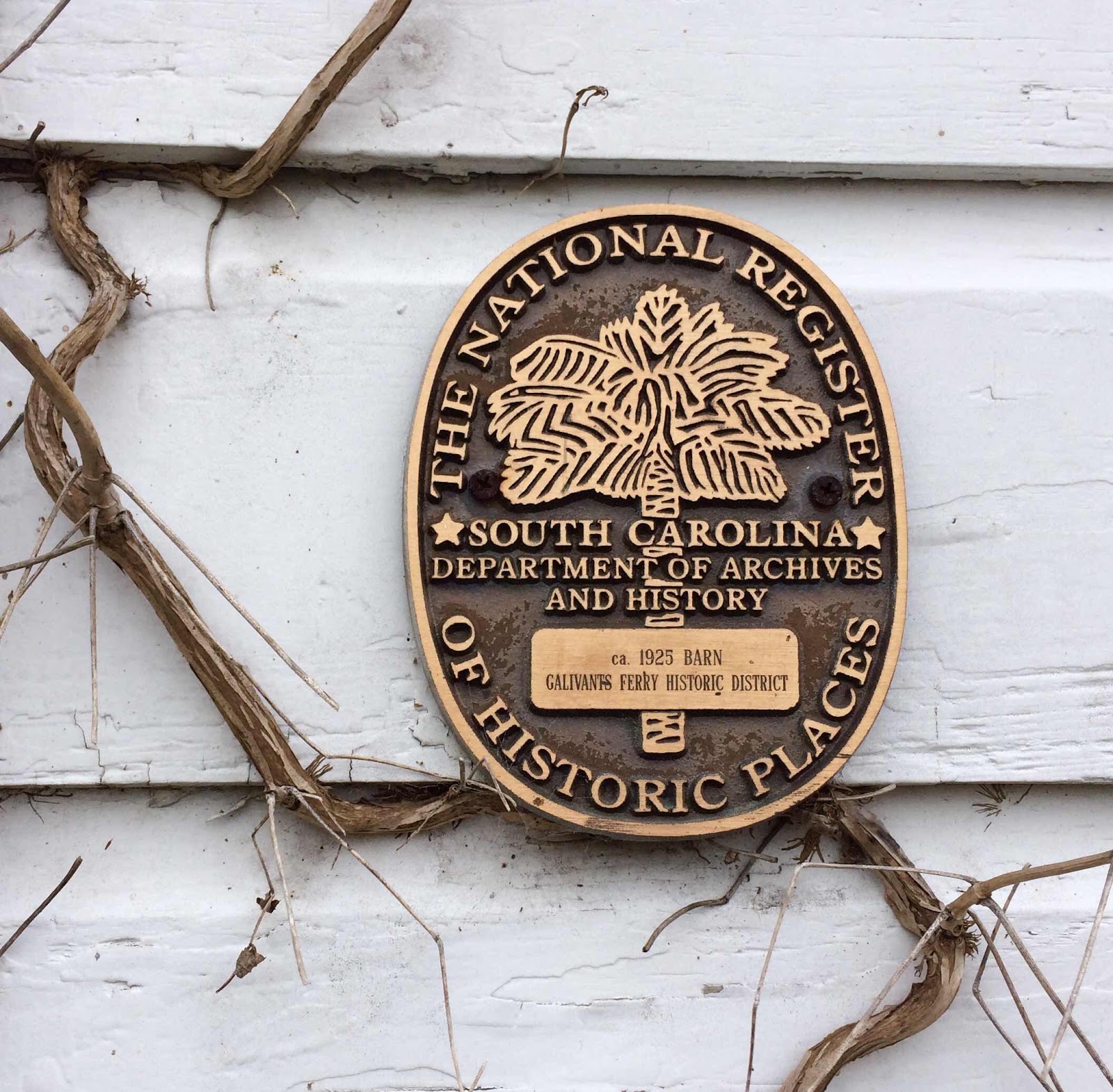 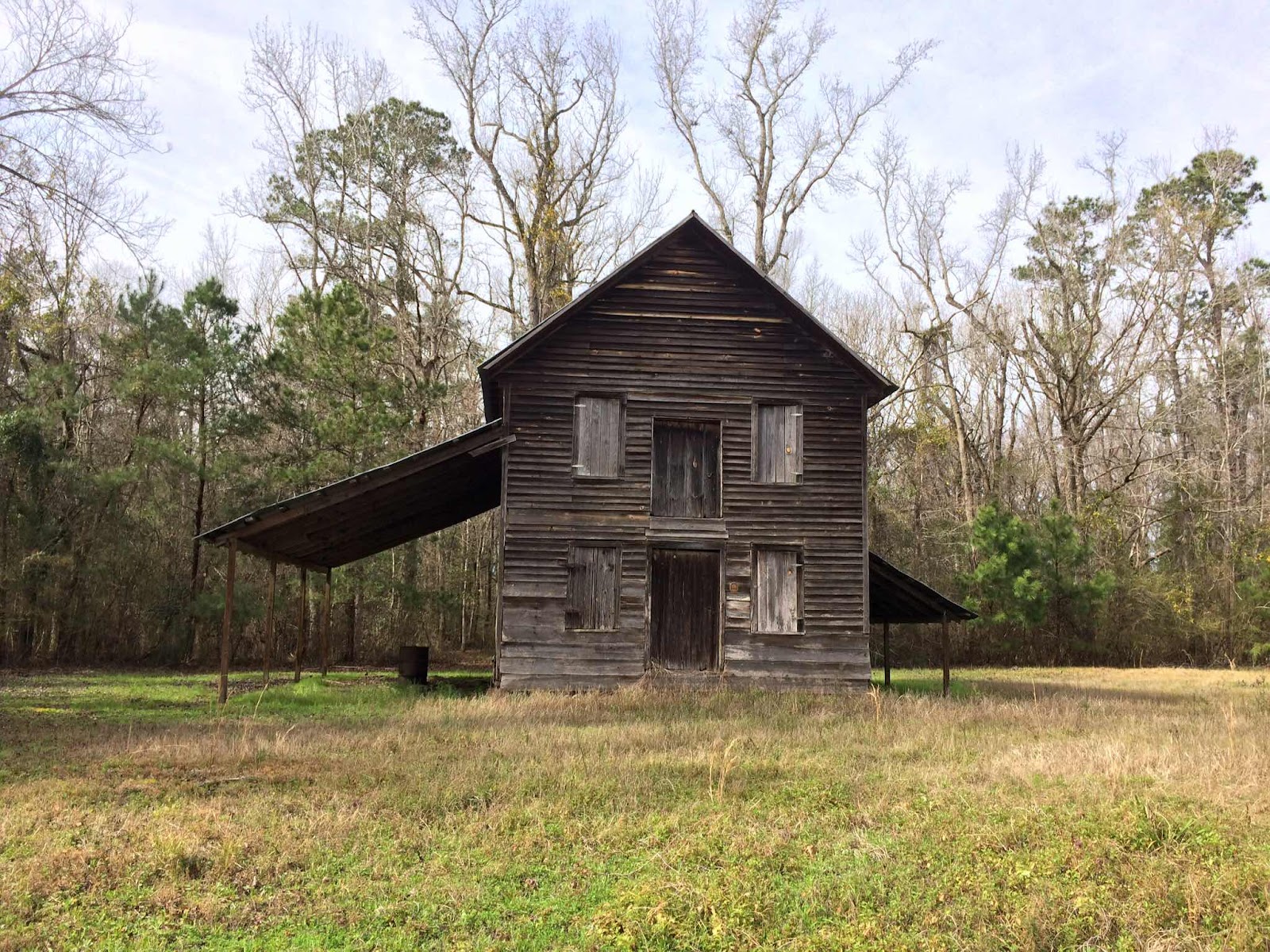 When the cotton industry was demolished by the boll weevil, area farmers turned to tobacco for a cash crop. The variety grown here was “flue-cured tobacco,” which required a heating process in the barn before being sent to market.   The Pack House (left) was used to grade the cured tobacco and store it until it was taken to auction. 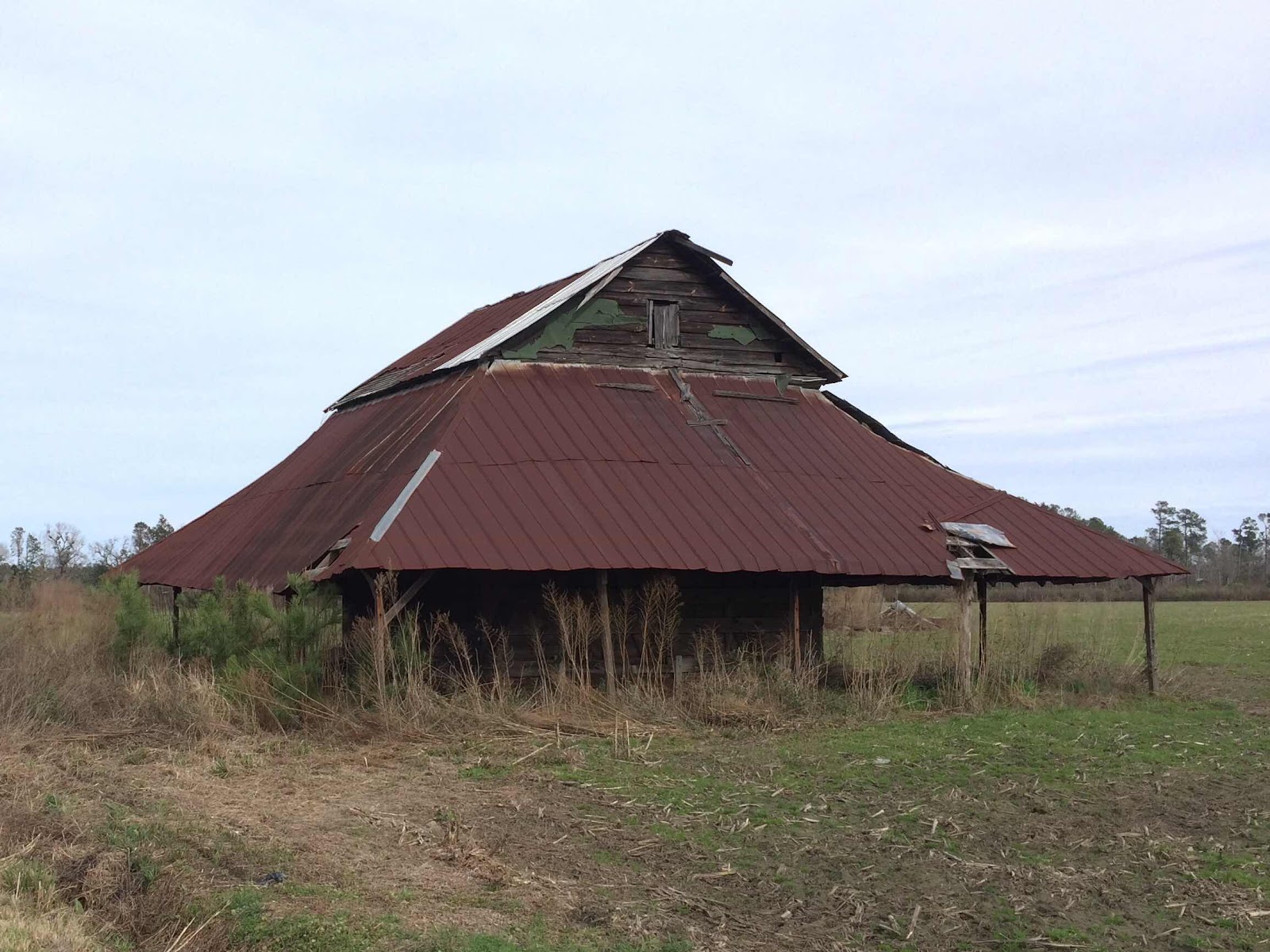 Tobacco barns in the field were made of pine logs and equipped with brick furnaces to cure the tobacco.  Someone had to be at the barn around the clock to tend the wood furnace and control the temperature for a period of three days up to 10 weeks. 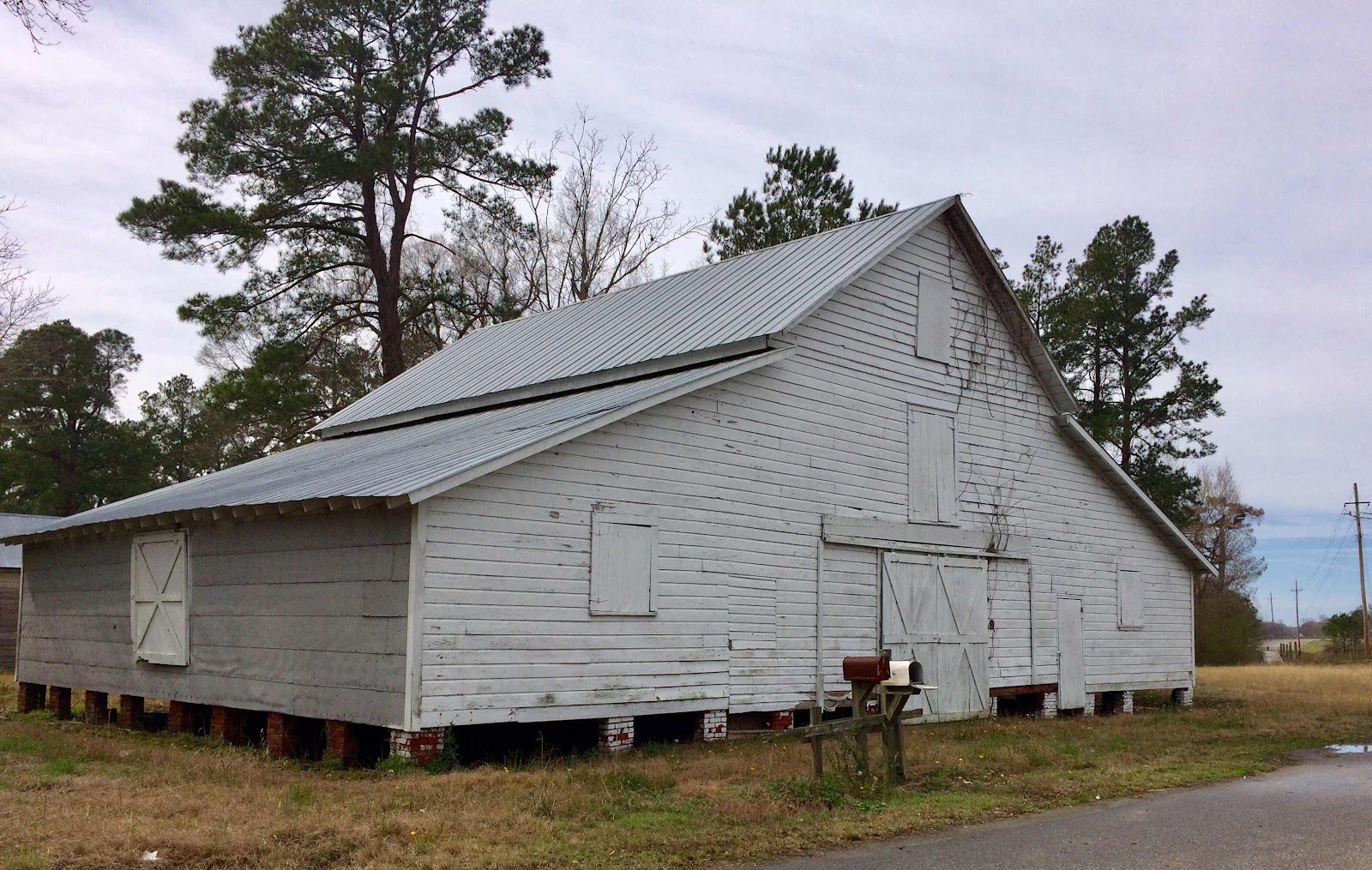 Behind this large storage barn a small village of 3-room sharecroppers’ cabins still stands.  In the 1930s and ‘40s, 1200 to 1500 men, women, and children were part of the sharecropping workforce in this area.  When the tobacco was sold, they received half the profits for their work. 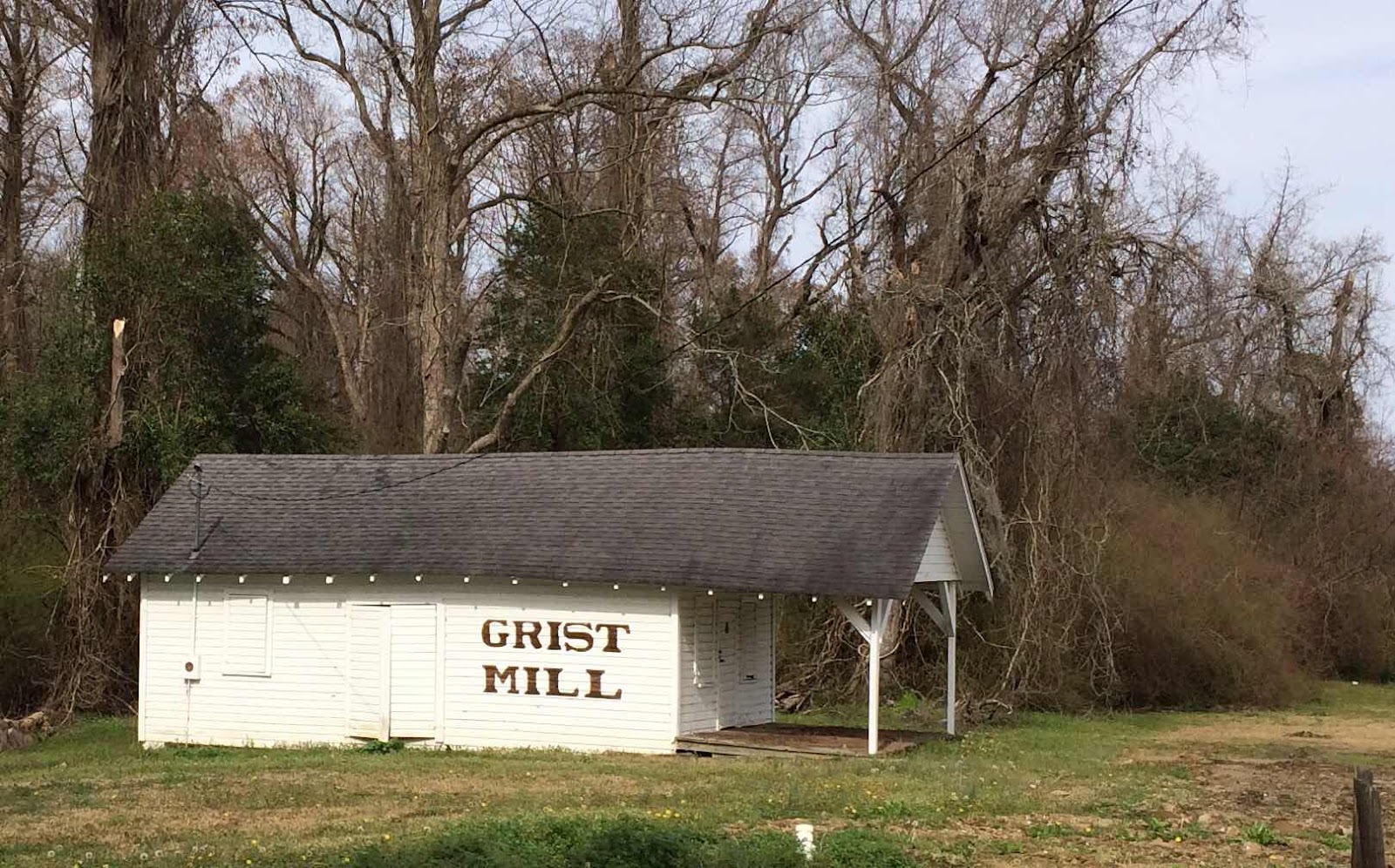 Powered by mules, the grist mill employed granite rollers to crush grain to produce flour, meal and grits to feed the community and livestock. The miller kept a portion of the meal as payment for the service.
There are quite a few more historic buildings to see in Gallivants Ferry, some of them still in private use.
It is an unusual historic site to visit as there are no commercial shops whatsoever selling stuff, no people around, no traffic, no explanatory signs.  You are happily left to explore with only the quiet flow of the river and your imagination to conjure up the stories the place has to tell. 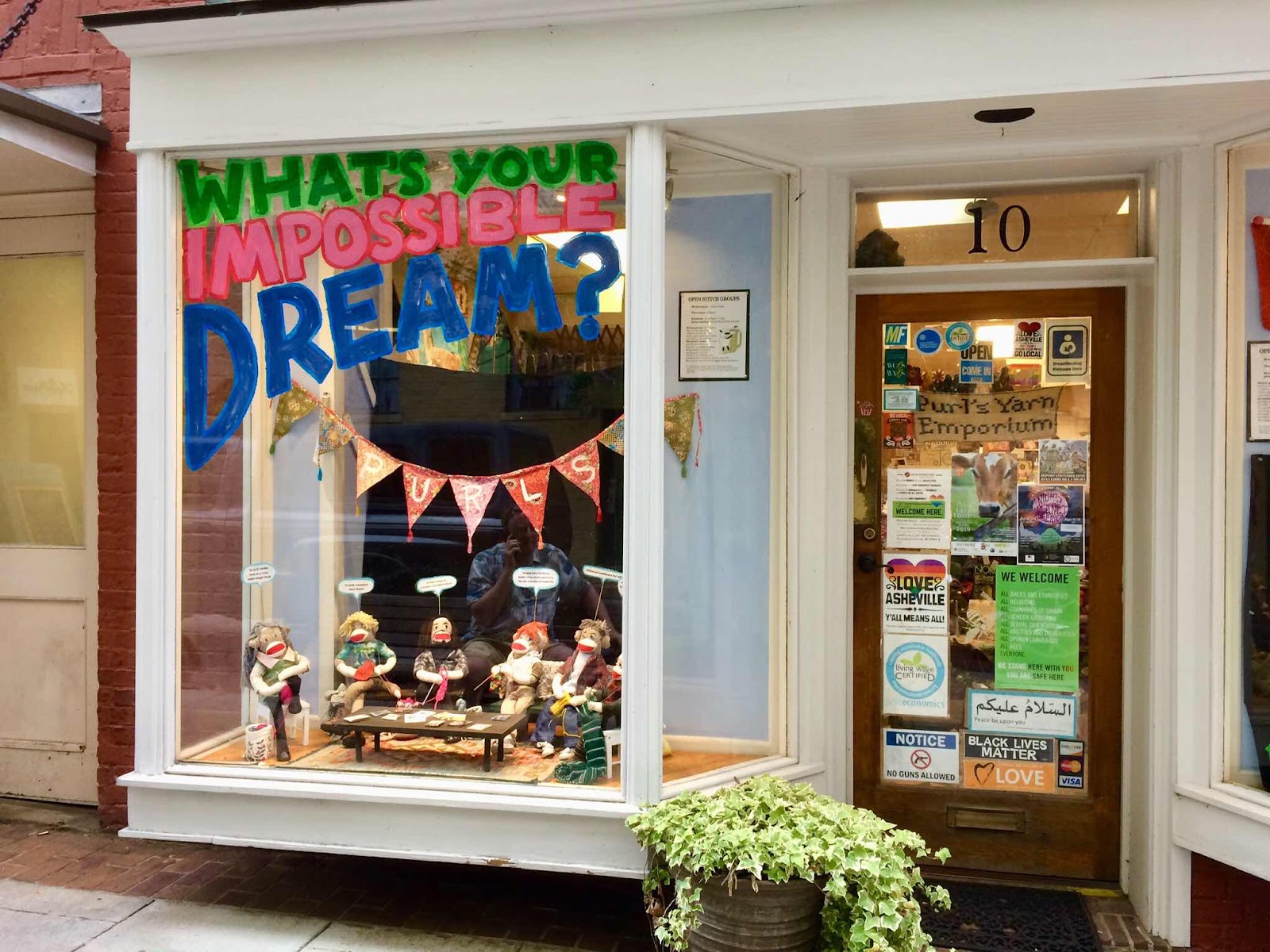 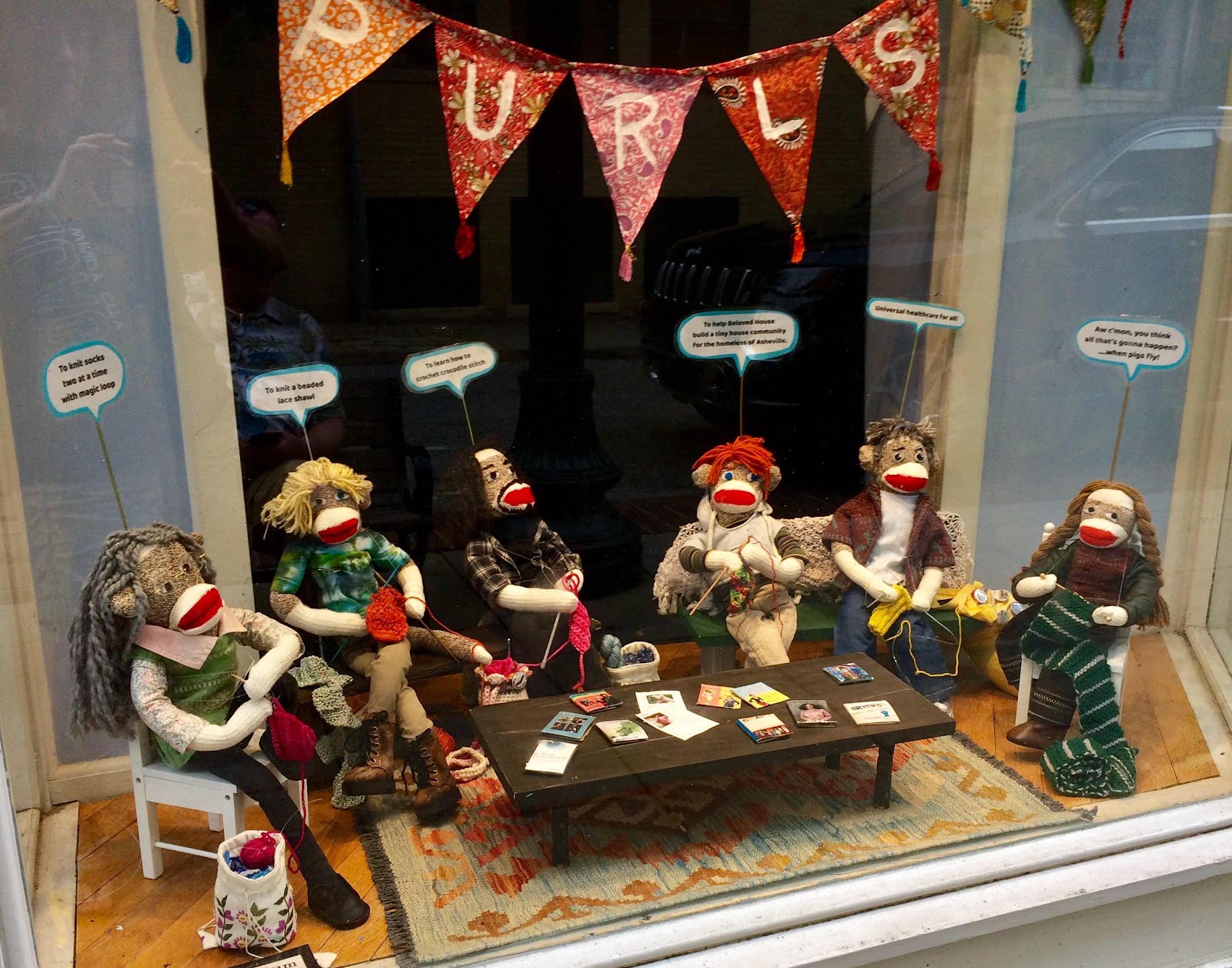 Simple sock monkeys made of men’s red-heeled work socks were popular when I was little.  Everybody had a grandma who made them.  But look closely at the details of these. This window display takes sock monkeys to a whole new level!
I had no idea such a humble toy would be controversial, but get this:
In 1953, Helen Cooke received the patent for sock monkeys and then sued a man named Stanley Levy because he was selling sock monkeys that were not the same design as hers.  He contacted the Nelson Knitting Company hoping that they would declare her patent invalid. One of the most important pieces of evidence the company uncovered was a doll made by a lady named Grace Wingent for her grandson in 1951. Helen caved and settled the case against Levy when she was shown the evidence against her.  She sold her sock monkey patent to the Nelson Knitting Company for $750.
“The Impossible Dream” from “Man of LaMancha”