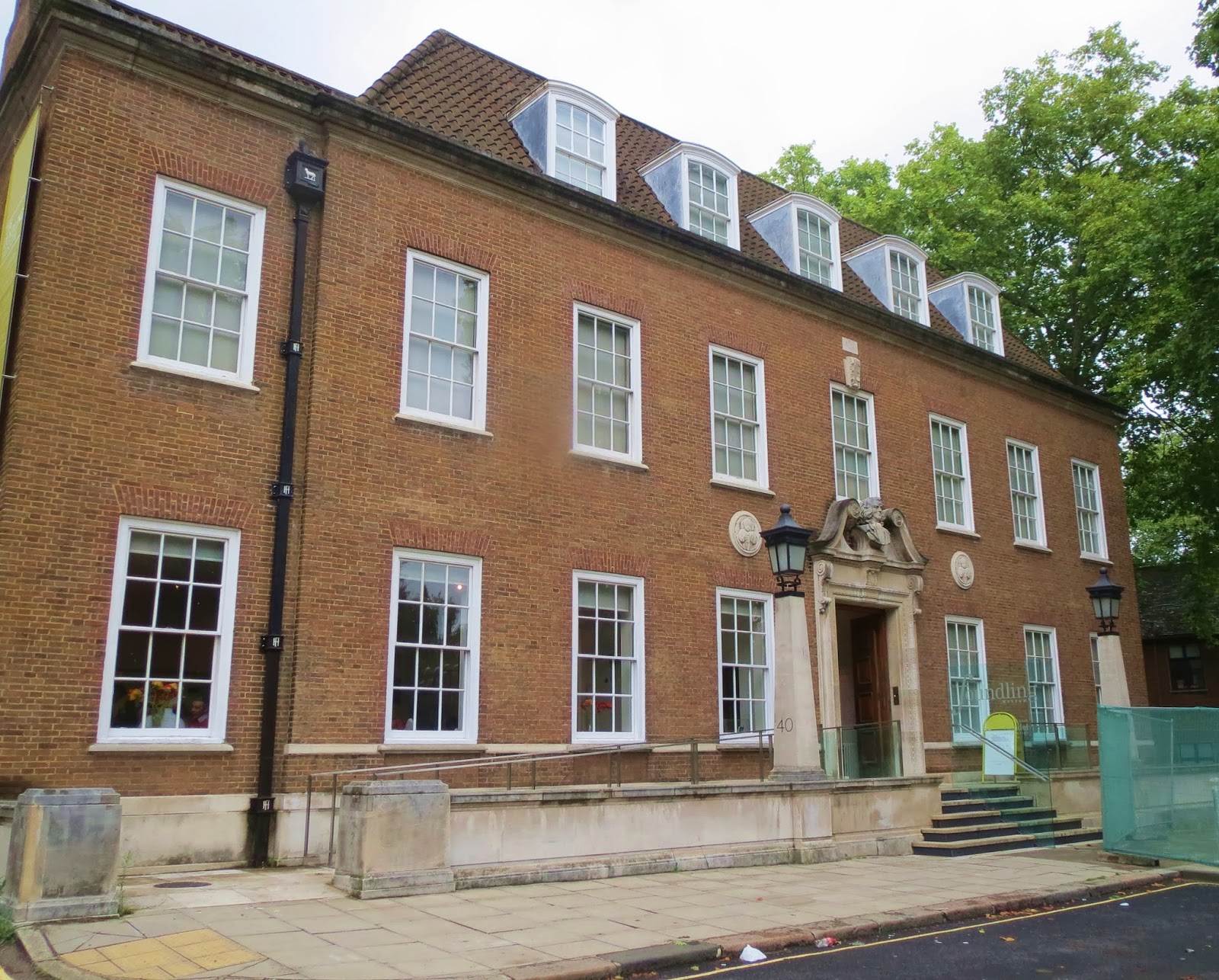 The London Foundling Museum, one of the lesser known museums that I visited last fall, was the first home built to house London's huge number of abandoned children. 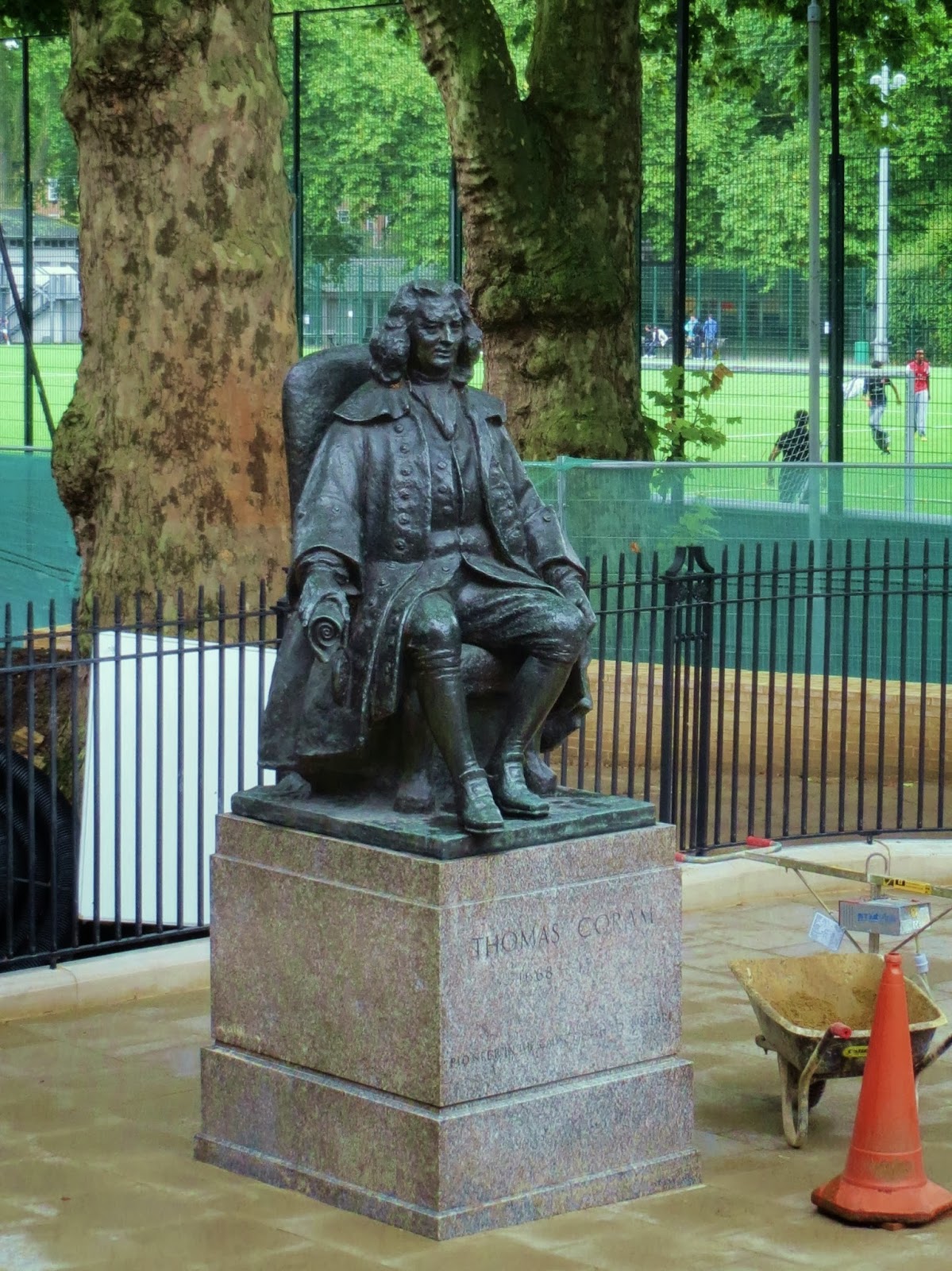 It was founded by a sea captain, Thomas Coram, and opened in 1741 to address a heartbreaking problem 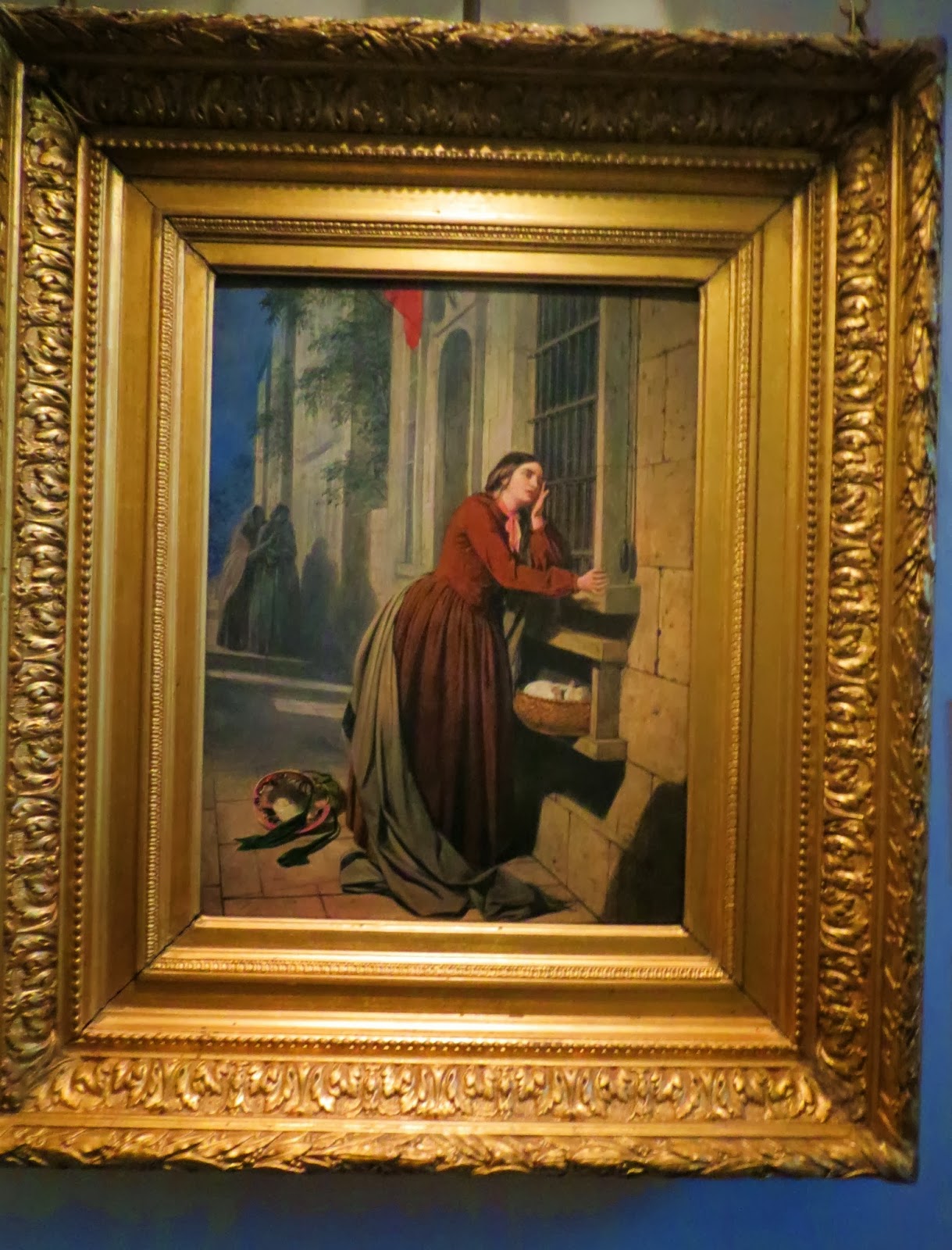 In the earliest days, when mothers brought their newborn babies to the hospital there was a lottery to determine if the baby would be admitted.  The mother had to select a ball from a bin; if it was the right color, her baby would be taken in.  Later a law was passed that every baby had to be accepted and a basket was placed outside the hospital for mothers to leave their infant.
Mothers were allowed to leave a letter to be kept at the hospital for their child, but since many could not write, they were also allowed to leave a token that would identify the child as theirs if they ever sought to be reunited.  At the museum is a sad and moving exhibit of these items: coins, buttons, fabric scraps, cheap jewelry, a poem.  Only a very few ever were able to return to claim their child.
Many of the babies were relinquished because their mothers were servants in the big houses of London who would be unable to work with a child to watch.  What a heartbreaking choice for a mother to have to make--essentially her life (and that of others who depended on her job) or her child's. 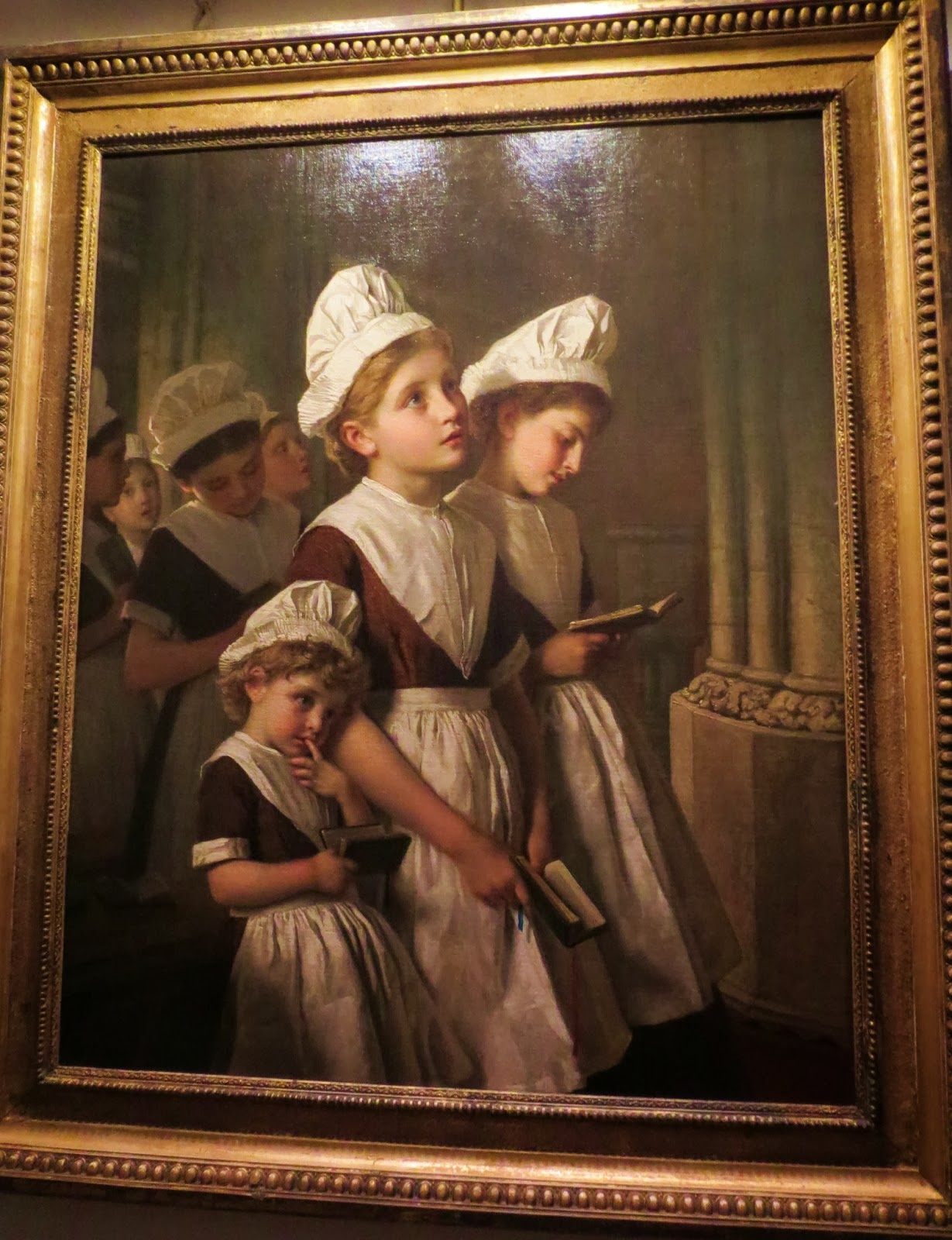 Children were only admitted in their first days of life. They went to wet nurses in the country until they were 4-5 years old and then returned to the hospital to live. At 16 girls were apprenticed out as servants for four years, boys at 14 for seven years. 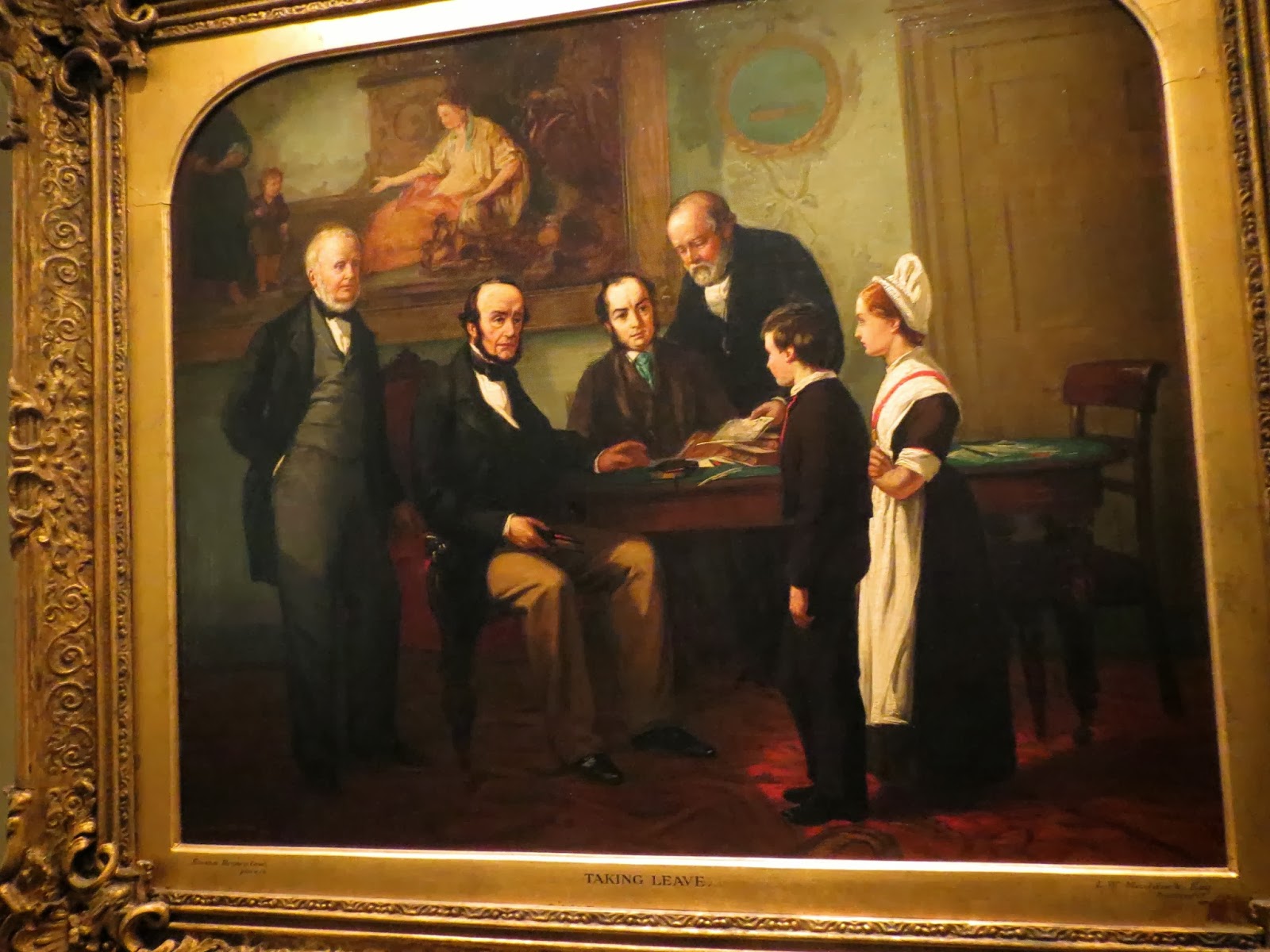 The survival rate of the children was abysmal.  In a four year period, almost 15,000 babies were presented to the hospital; 4,400 survived to the age to be apprenticed.

Coram helped to fund the Foundling Hospital by opening the first public art gallery in London.  Other funds came from benefit concerts generously given by George Frideric Handel in the hospital chapel.

The hospital was demolished in 1926.  The grounds are now a park called Coram's Fields, which can only be entered by adults with a child in tow. 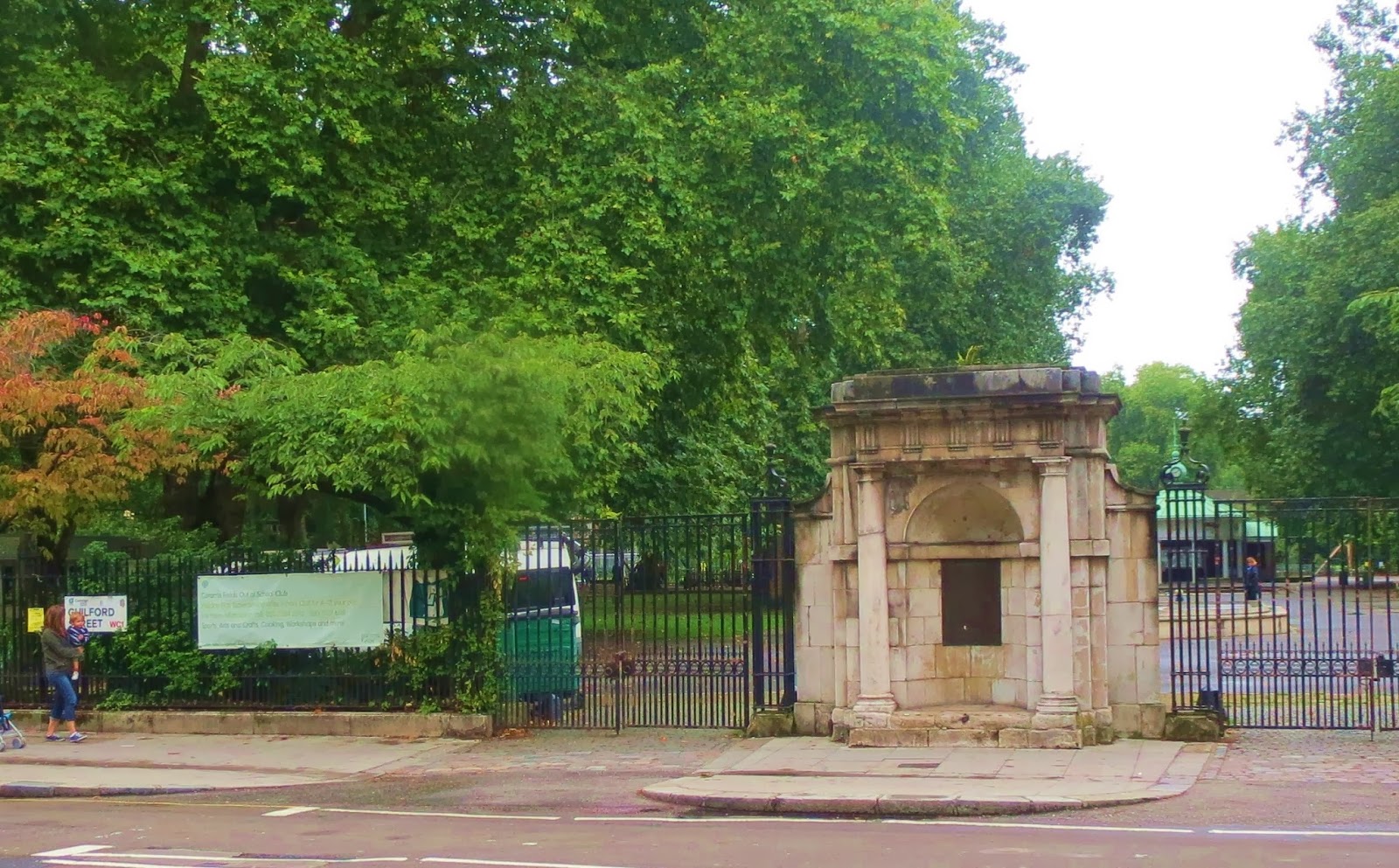 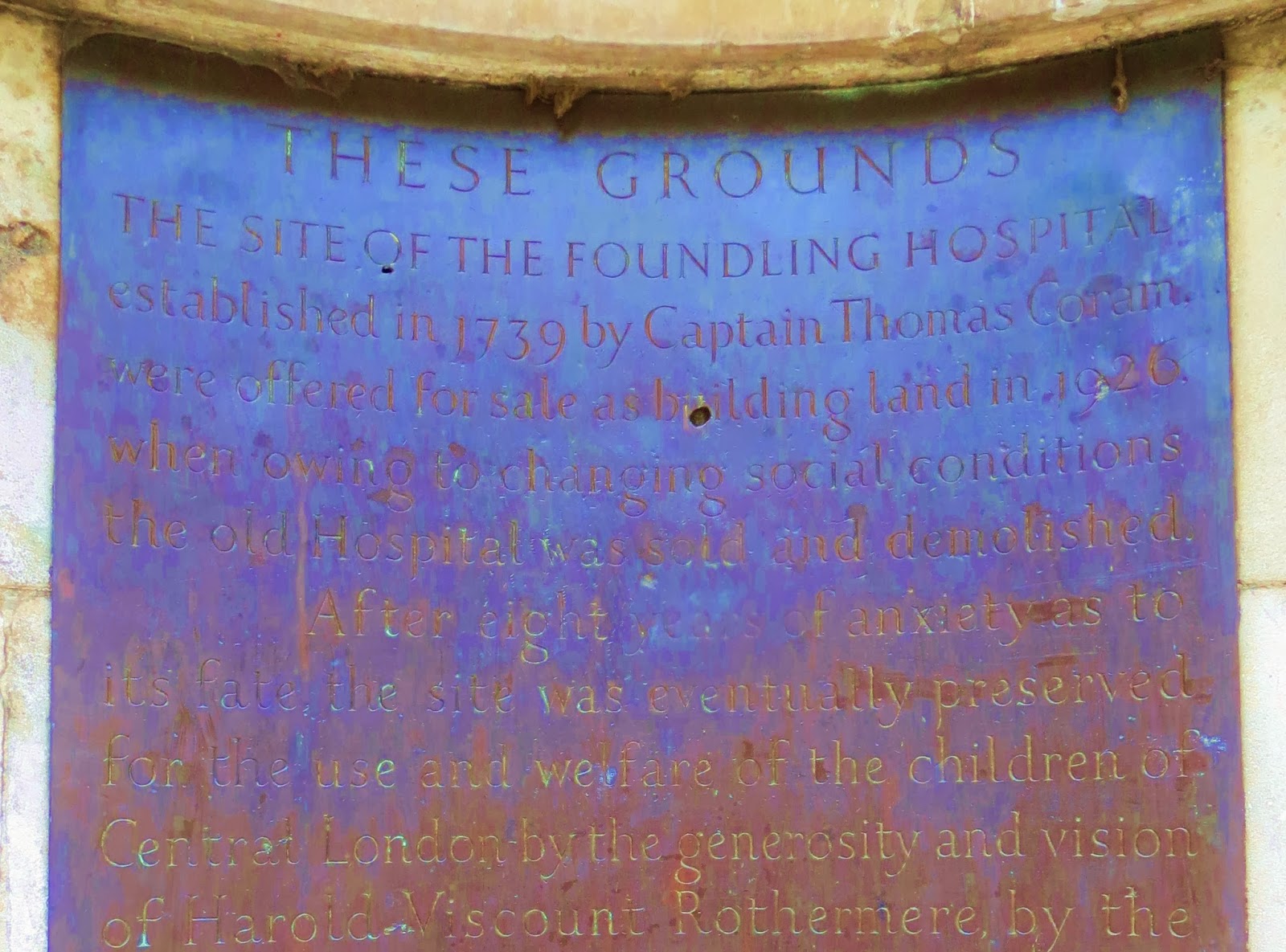 While the exhibit was rather small and hard to view, I did enjoy the video interviews of adults remembering their days at the Foundling Hospital (when groups thinned and I could actually hear!).

Joining Our World Tuesday at http://ourworldtuesdaymeme.blogspot.com/

Thanks for reading my blog.  I enjoy reading your comments and will visit your blog in return. 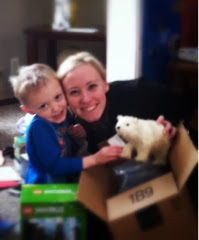 What every mama wants for Christmas, a polar bear!  And yes, he picked it out himself.
(A little blurry, but sometimes you have to act fast and go with it!)
Posted by Cynthia at 6:55 AM 5 comments:

Guess Who's Coming to Dinner!

An uninvited guest has been showing up at my birdfeeders this week.  So far, it seems the cardinals, juncos, chickadees, nuthatches, house finches, etc., have escaped his talons because I haven't seen any signs of blood and feathers in the snow. 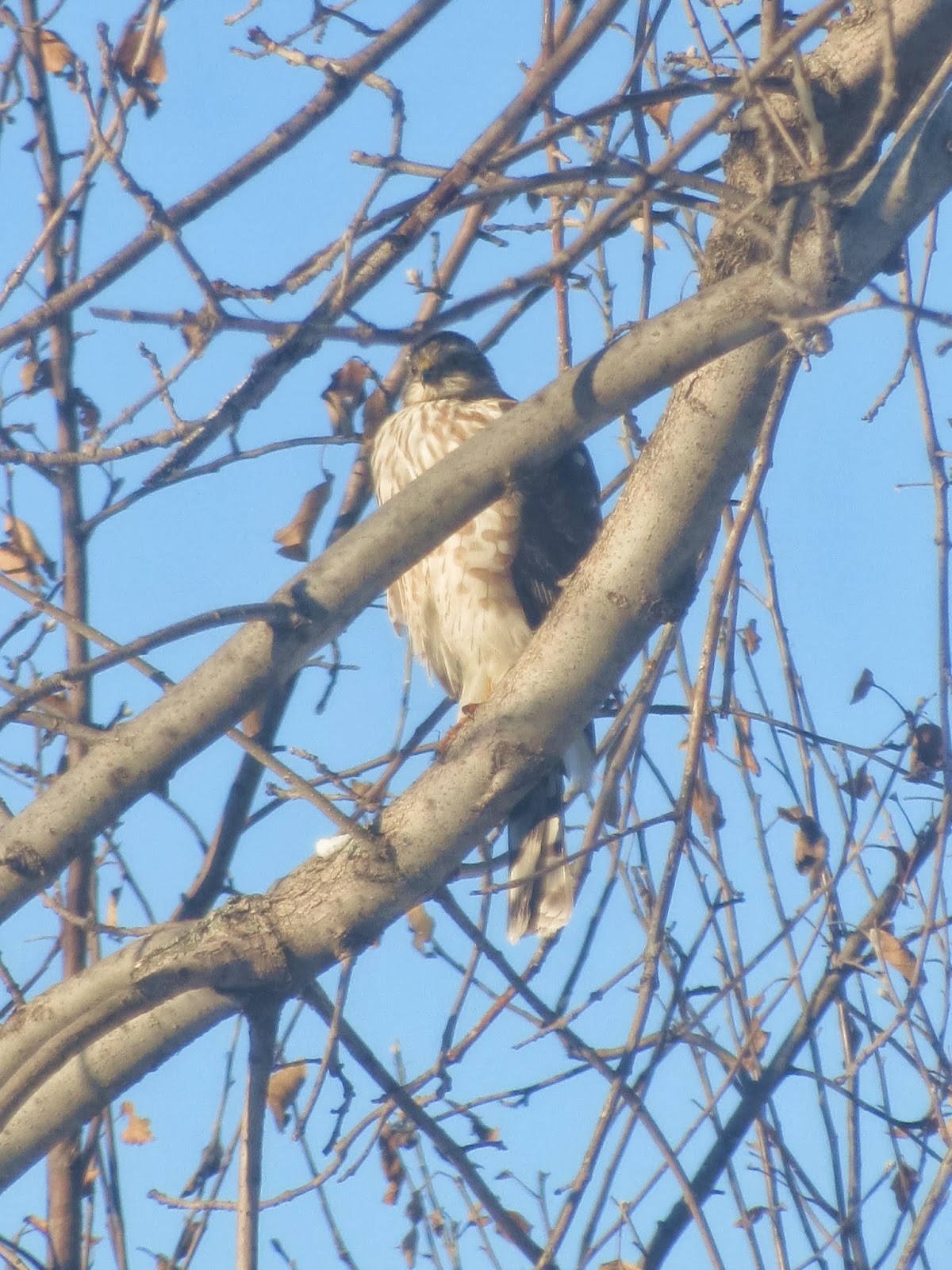 This big Cooper's hawk sits in the ash tree, 10 feet above and away from the feeders, until I notice and chase him away.  I know hawks have to eat, too, but I need the color my songbirds bring to my very white backyard at this time of year!
(Not the greatest photo because I had to take it through three thicknesses of glass that make up my kitchen window in the winter.  As soon as I open the back door, he now flies away before I can throw snow at him, or take a photo.)
Thanks for reading my blog.  A comment from you would brighten up this cold, snowy day!
Posted by Cynthia at 10:17 AM 4 comments:

When I first got my iPad, I made a case to protect it from wool I knitted and felted.  Unfortunately, it was a light beige color and hard to keep clean.  So I dyed it with tea.  The dye didn't take evenly and it looked blotchy, and although I used it, I wasnt happy with it.
Today I decided to make a new cover.  I looked through my stash of fabric, and came up with an upcycling, recycling project. 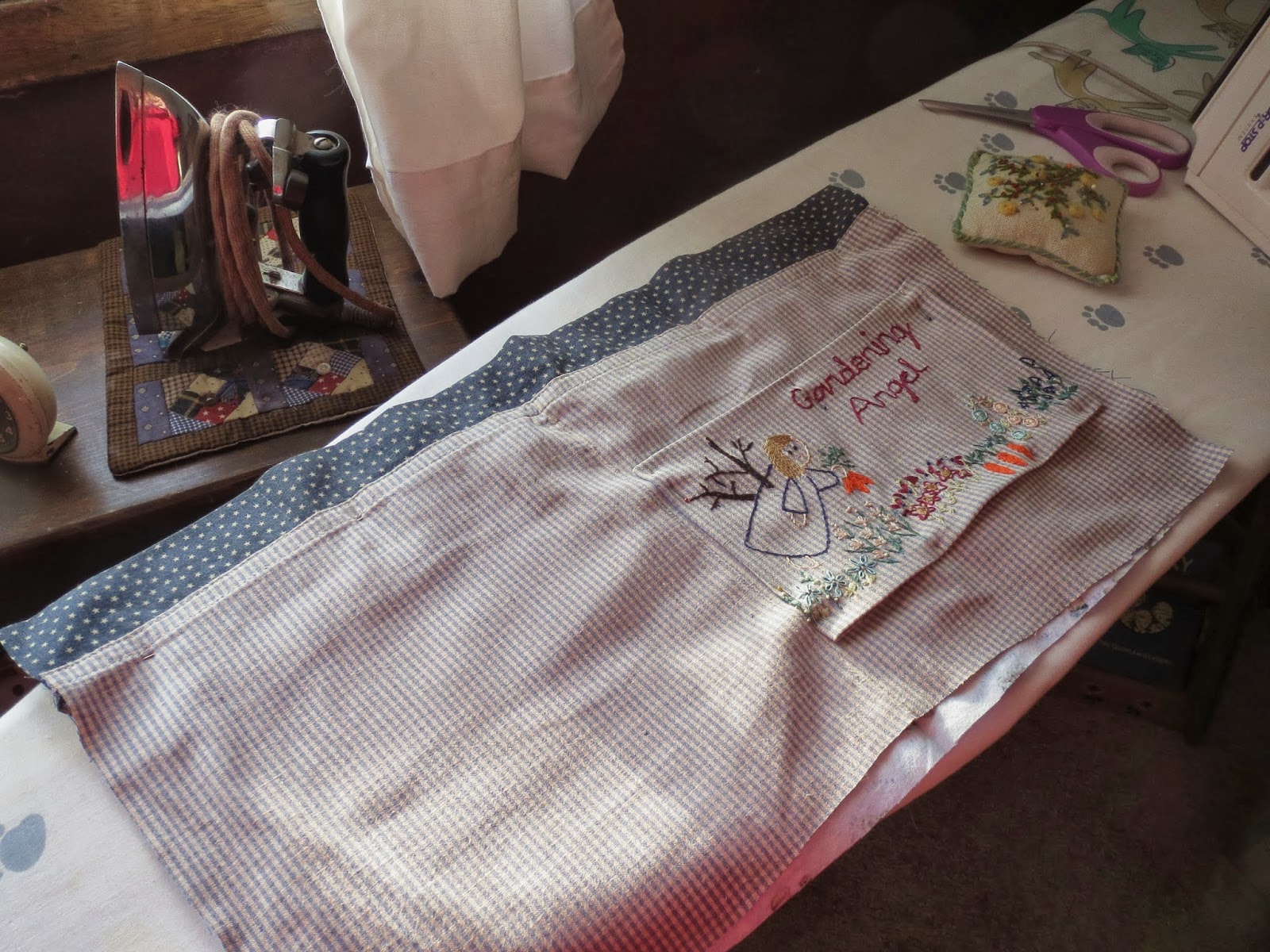 I cut up a piece of homespun that used to be a jumper and cut layers of flannel scraps to pad the bag. 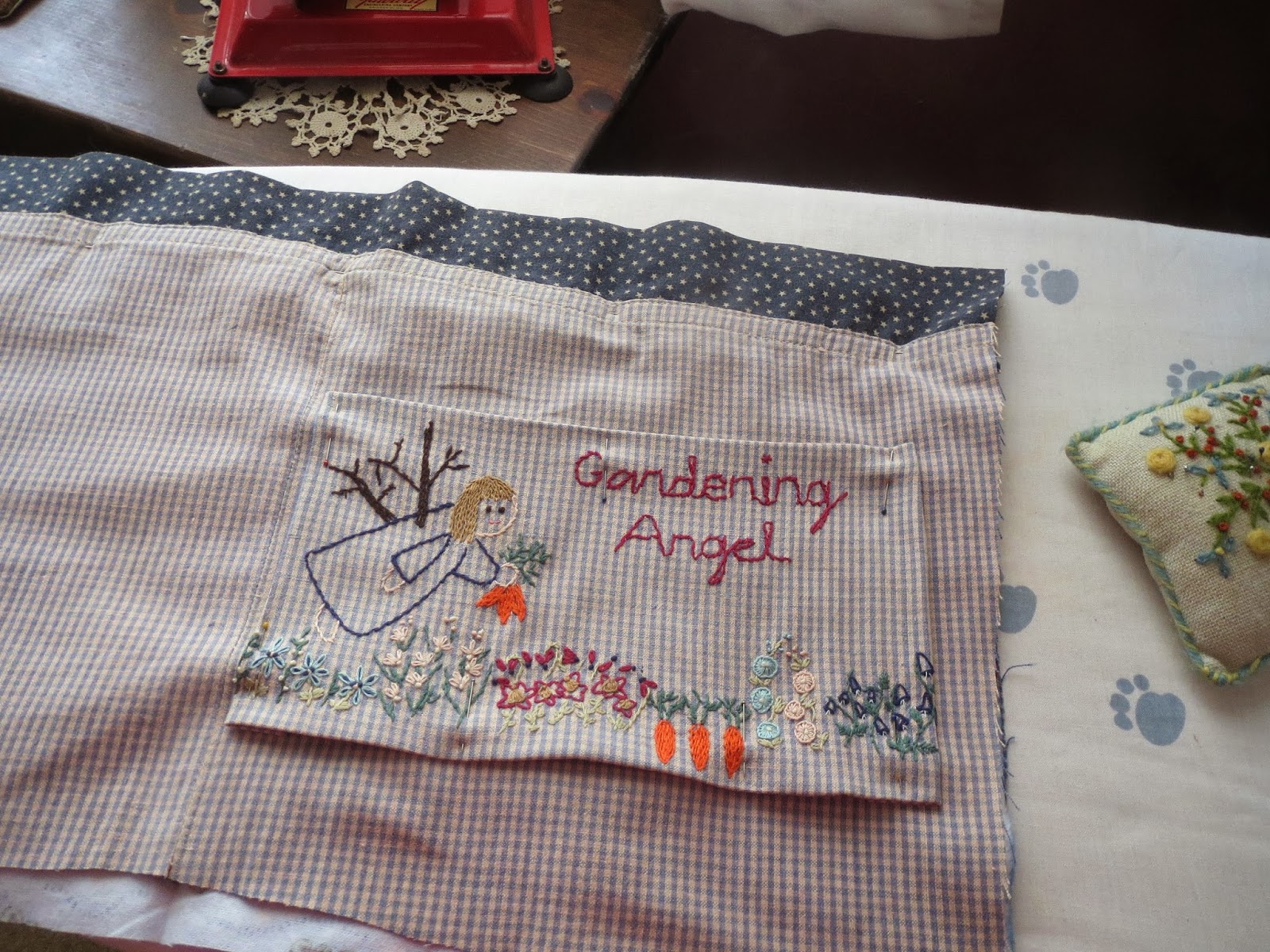 I added some embroidery I did many years ago.  I still like this gardening angel and remember how much fun I had learning some fancy new embroidery stitches to make the flowers. 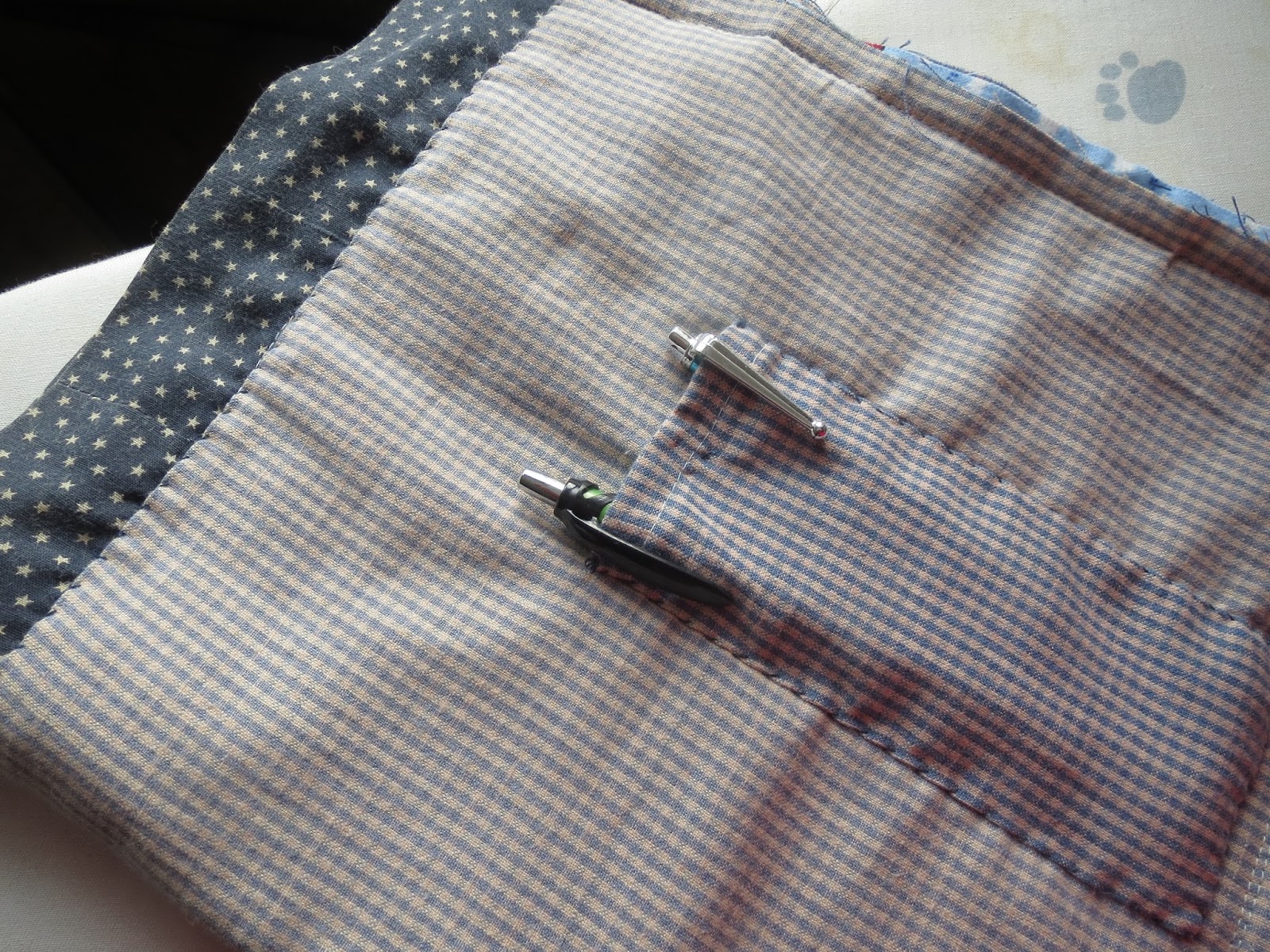 Next I made a pocket to hold a pen and a stylus.  That way I won't have to fish around in the bottom of the bag to find one when I need it. 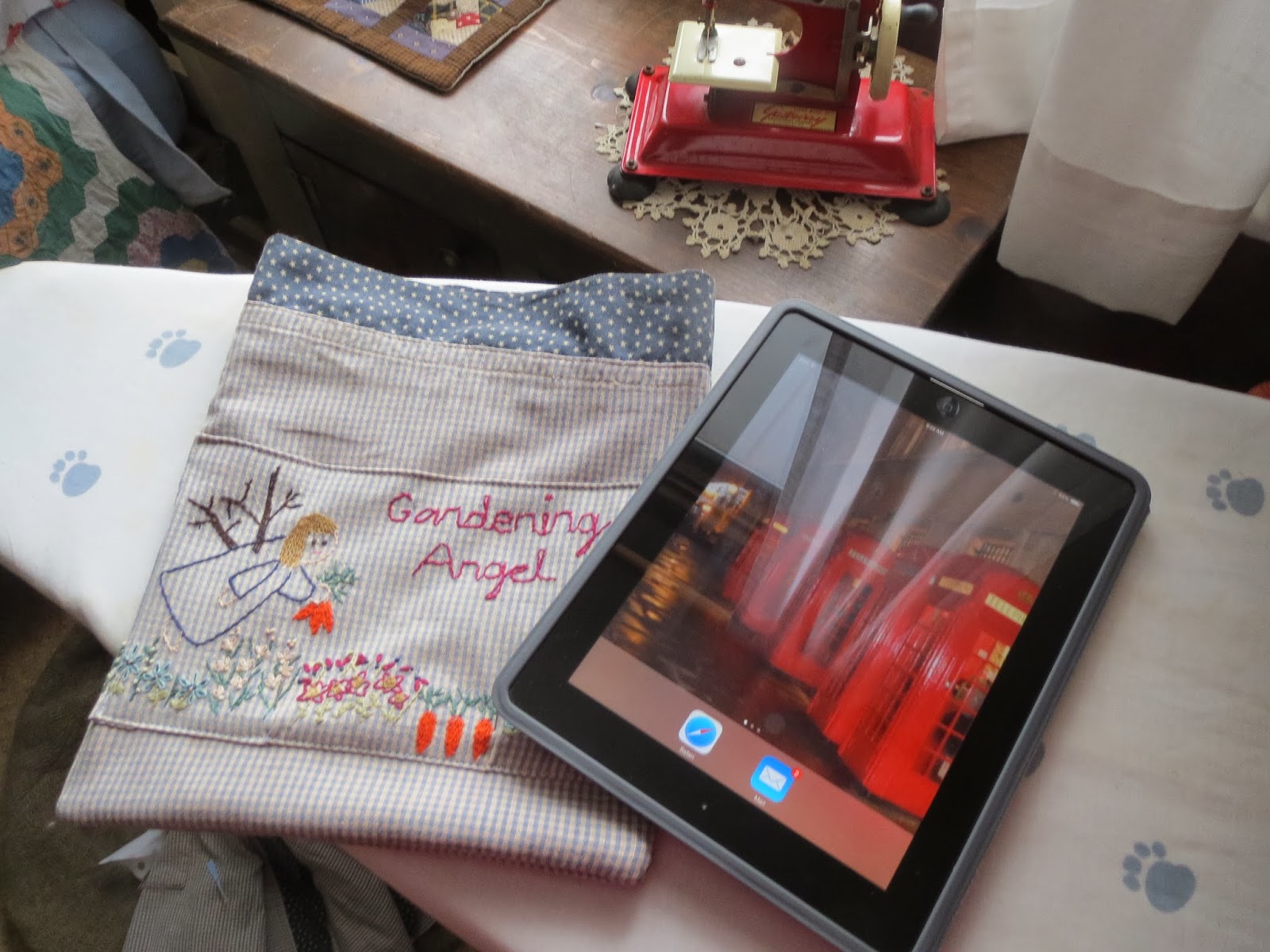 ﻿
﻿
There you have it. I'm happy with it, and a big chunk of fabric has a new life instead of ending up in the landfill.
What about the old wool one?  Wool dyed with tea contains no harmful chemicals and can be cut up and added to the compost heap.  Where the gardening angels will magically recycle it into new garden soil in the spring!

Winter Walk on the Prairie 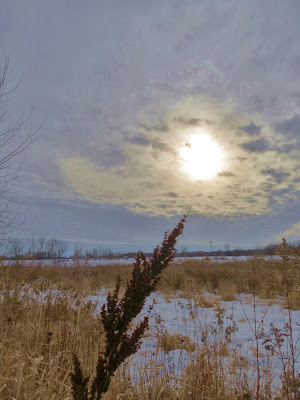 “If we had no winter, the spring would not be so pleasant: if we did not sometimes taste of adversity, prosperity would not be so welcome."
Anne Bradstreet, English-American poet.
Anne Bradstreet is called the "first American poet," and I love her poetry.  It is from the heart and mostly about her daily life, which included losing children to diseases in the New World, house fires, and a deep love for her home and the things that reminded her of her life in England. 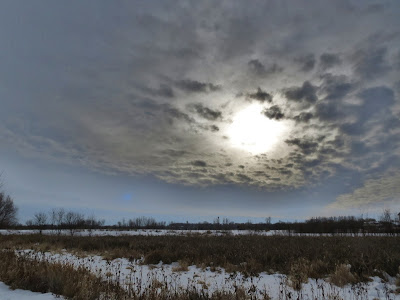 
Robins normally leave Minnesota in the fall. While it's not unusual to see a few stragglers up until Christmas, I am still seeing large flocks this year. This flock covered many trees, and I estimate that there were at least 100, probably more. I wonder what they are finding to eat and how they are surviving the extremely cold temperatures we have had. I am happy to see them, though, because they do remind me that hope of a glorious spring isn't so awfully far away.

A Gift From the Arctic Circle

Baby, it's cold outside!  When I got up this morning, it was -28F (-33.33C) with a windchill of -48F.  The governor closed all schools in the state because it's too cold for children to be outside waiting for a school bus or walking to school.  If I were still teaching, I'd be pretty excited!
﻿﻿﻿﻿﻿﻿

I recently ran across a term I had never heard before: "thin places".  I instantly connected with it because although I didn't know what to call it, I have certainly experienced these places when I travel.
From what I understand, it was first used by the Celts and later Christians to describe certain places where the eternal world comes closer to the Earthly world.  Native Americans had a similar idea, as in this Apache proverb: "Wisdom sits in places."
The actual definition seems hard to put in words, and one person's thin place is not necessarily experienced as that by someone else.  I think a thin place is unexpected and mysterious, and when you enter it, it changes you and how you think.  You experience a connection with God or Spirit or whatever word you use, as well as (for me) with others who used the same space before.
I've been thinking about the thin places that I have entered and returned from with new understanding.  The first place that came to mind was Glendalough in Ireland.  It was a cold November day and I was young and alone there all day, but I never felt alone.  I felt immersed in peace, good will, wisdom, the past, and I was absorbing it all effortlessly.

A recent thin place for me was Canterbury Cathedral in England last March.  I have visited a lot of beautiful cathedrals in several countries, and while Canterbury is beautiful, it's not the most beautiful.  But for me it glowed with that feeling of connection with the past, with the humans who worked there, who worshiped there, who died there.  I physically felt surrounded by the presence of Ancients, of peace, of wisdom and knowledge, and felt able to absorb and understand important things. I knew when I left that I would never be the same.
With the New Year all spread out ahead of me, I've been thinking a lot of where I am going to travel this year.  I love planning a trip almost as much as taking the trip!  We received a phone call this week about the sudden death of a close relative, and as her husband talked about his grief, he said his only regret was that they had not traveled more while they were more fit and able.  It's a good reminder and helped me focus my planning a little differently.  Instead of a tour of China, I'm going to be planning some more strenuous travel while I can still do that.  I really hope I encounter some new thin places this year!

Thanks for reading my blog.  I would love to hear about Thin Places you have experienced.
Posted by Cynthia at 3:24 PM 6 comments: