I'm always thinking I should wait for something blog-worthy to happen before I post.  And by blog-worthy, I mean something bigger than the little events of my ordinary day.  The other day I read something that made me stop and think.
"It was an ordinary day, a quick phone call to my cousin Caron recently to wish her a happy birthday, I asked her how she was planning to celebrate turning 74.  Caron has grown frail the past few years, suffering from COPD and tethered to oxygen 24 hours a day. Caron laughed quietly. "You know, the best celebration I can imagine is just having one more ordinary day," she replied. "I'm grateful for every day of my life. Every day is a celebration!"
Well, it's true!  Any day, so-called ordinary days, they're all precious and celebration-worthy.
Yesterday we were driving home from a short errand -- Bob needed a new bag of chewies (big bones to gnaw on to distract her from her tennis ball obsession once in a while).  Out of the fog, on a tiny island between the big bridges in Georgetown, these guys materialized 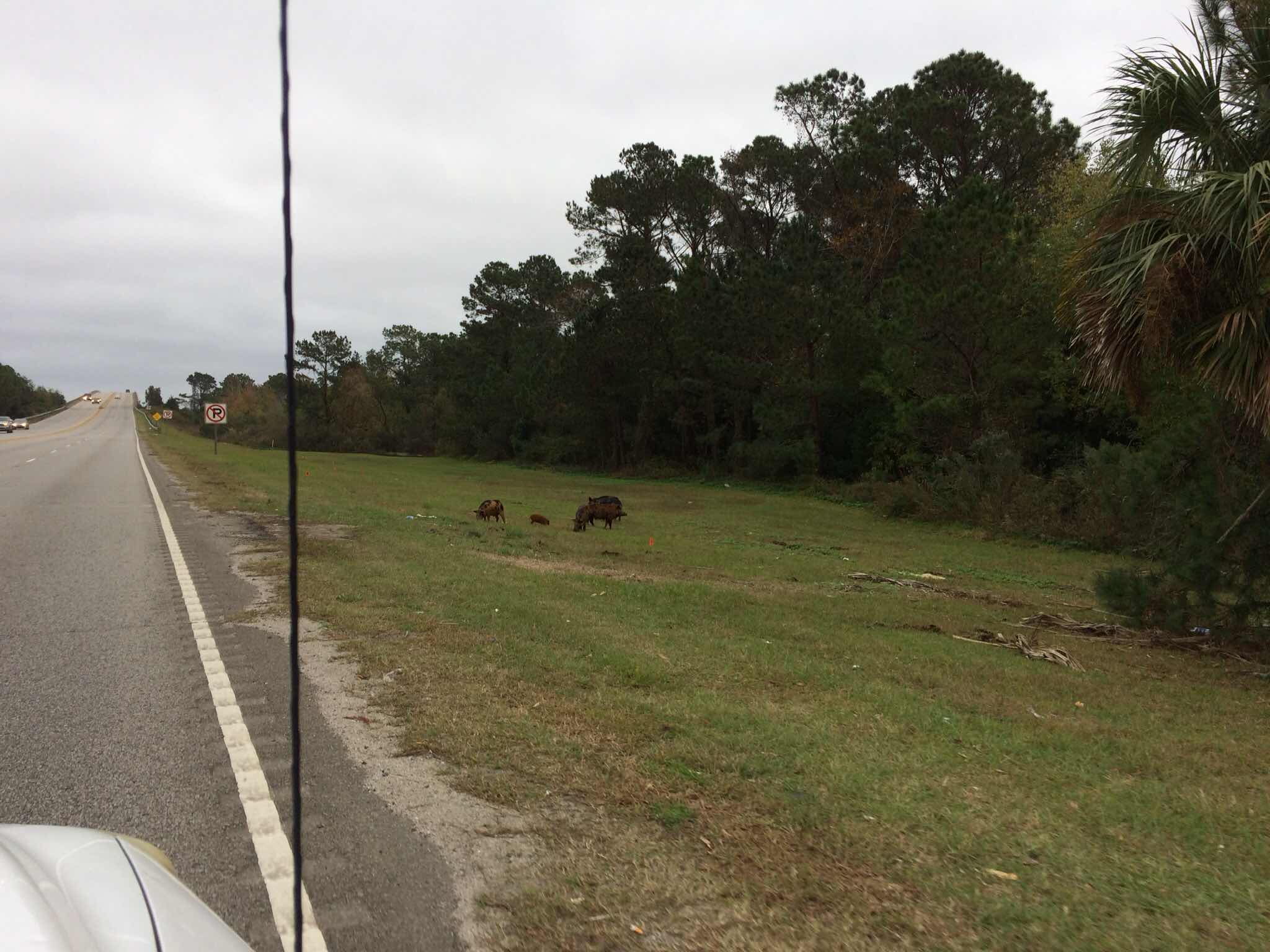 A CELEBRATION of Pigs!
There are no farms anywhere for many miles around.  No one lives on this island.  To get here they had to swim.  Did they come in with the floods after hurricane this fall?  Were they once, many generations ago, from one of the rice plantations on the river? 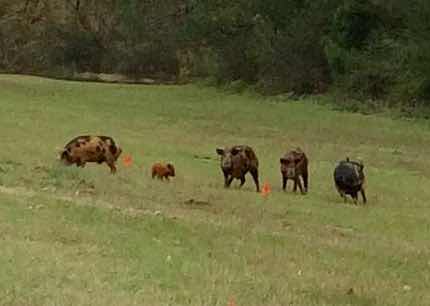 Five in this photo but there were seven in the grass, probably more in the woods. 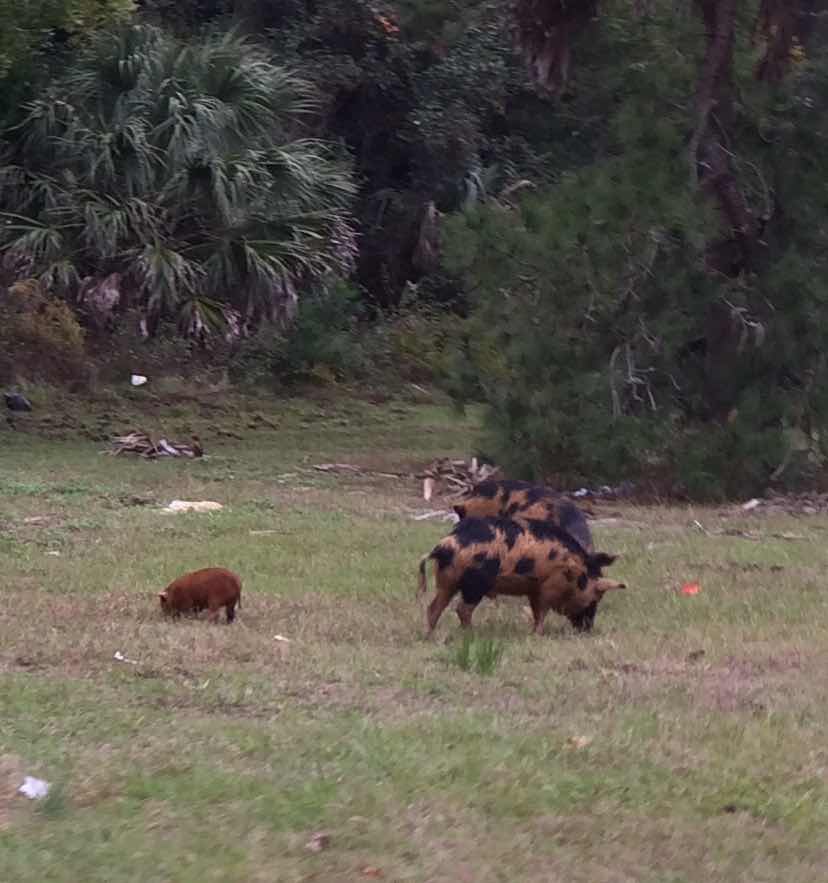 Not celebrating Georgetown's litter problem, which you can see all too well in this photo.
But isn't that baby cute, hanging out with the big guys?
On Thursday we had a Thanksgiving/Christmas CELEBRATION in Orlando with four children and their families. 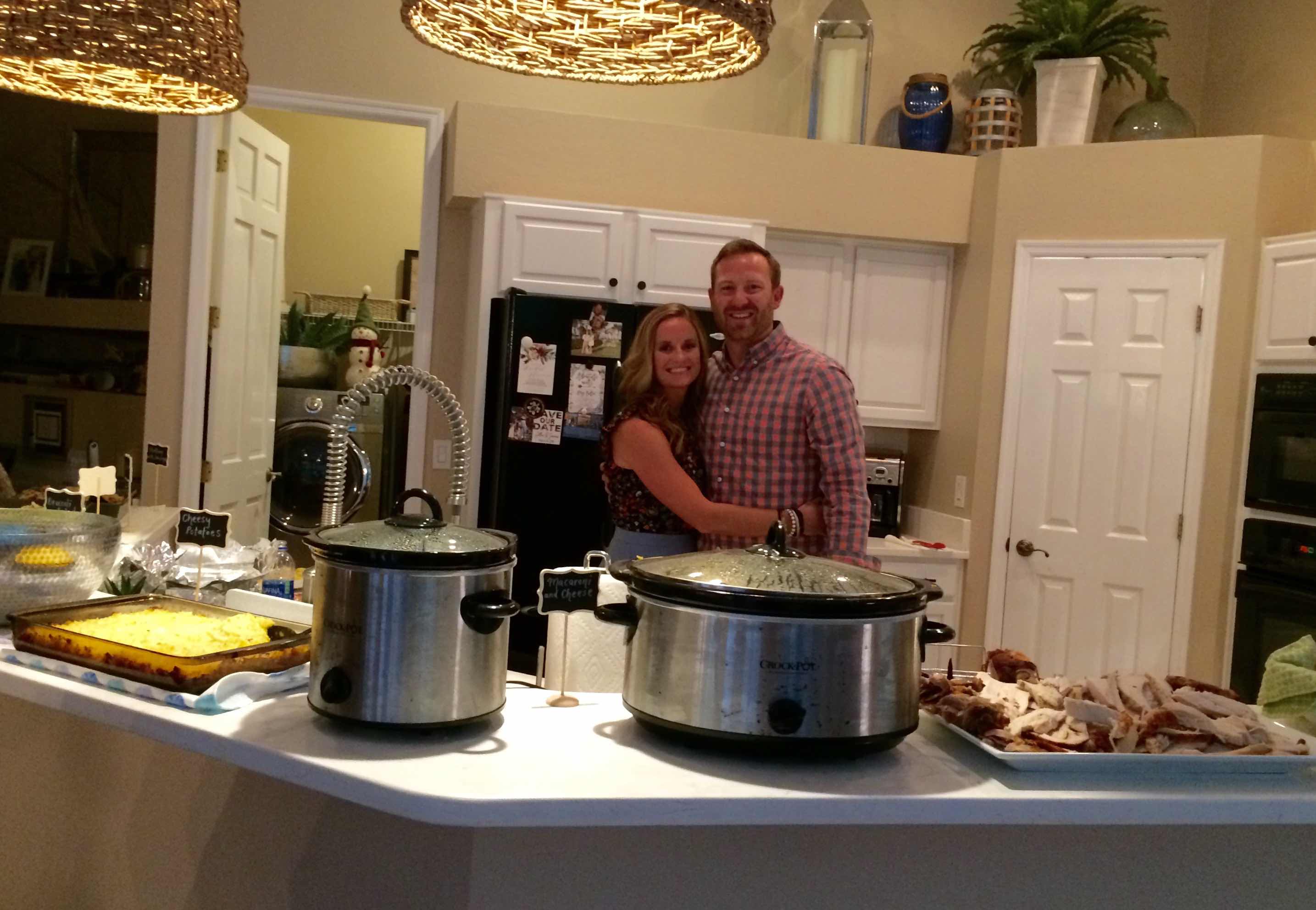 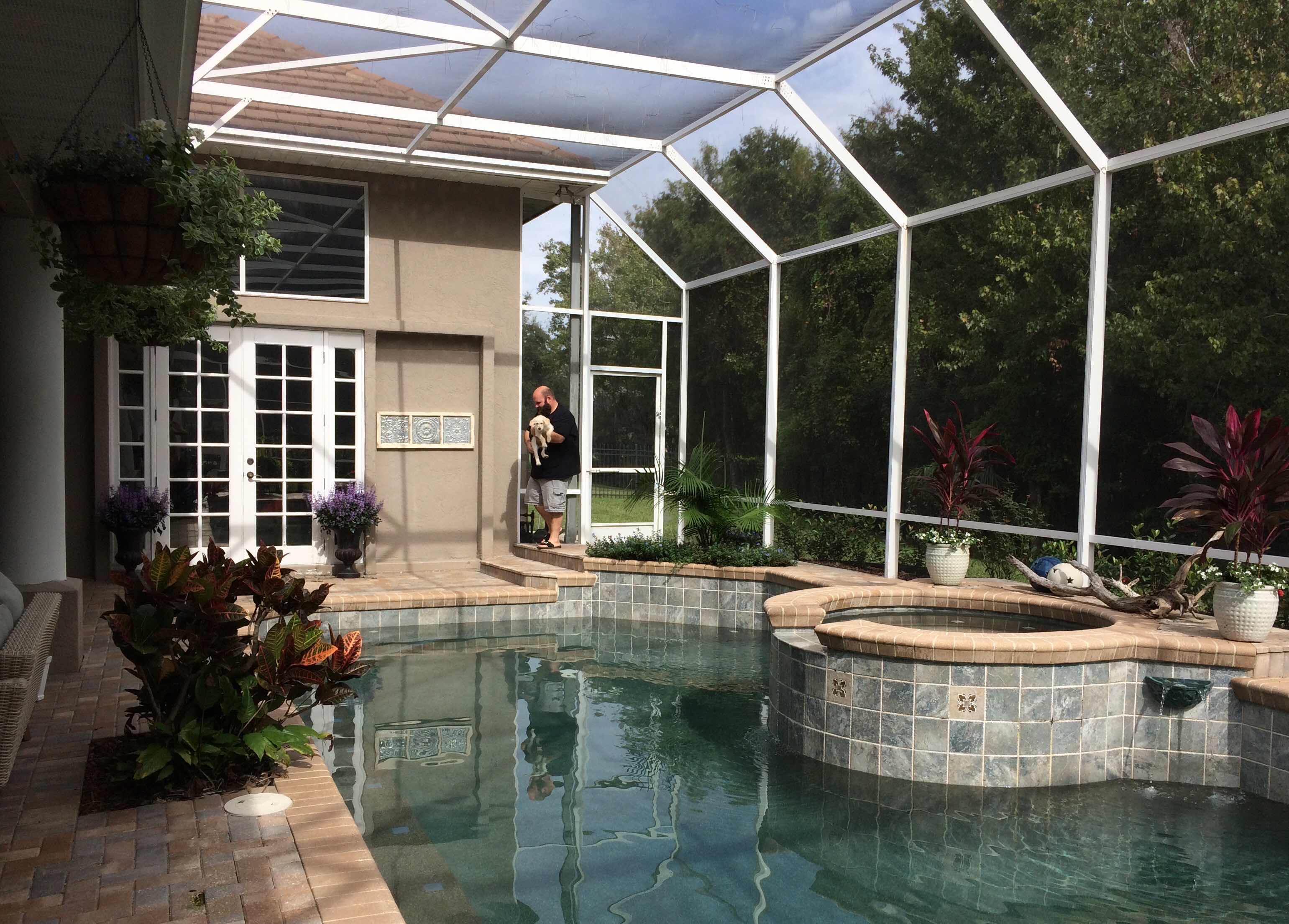 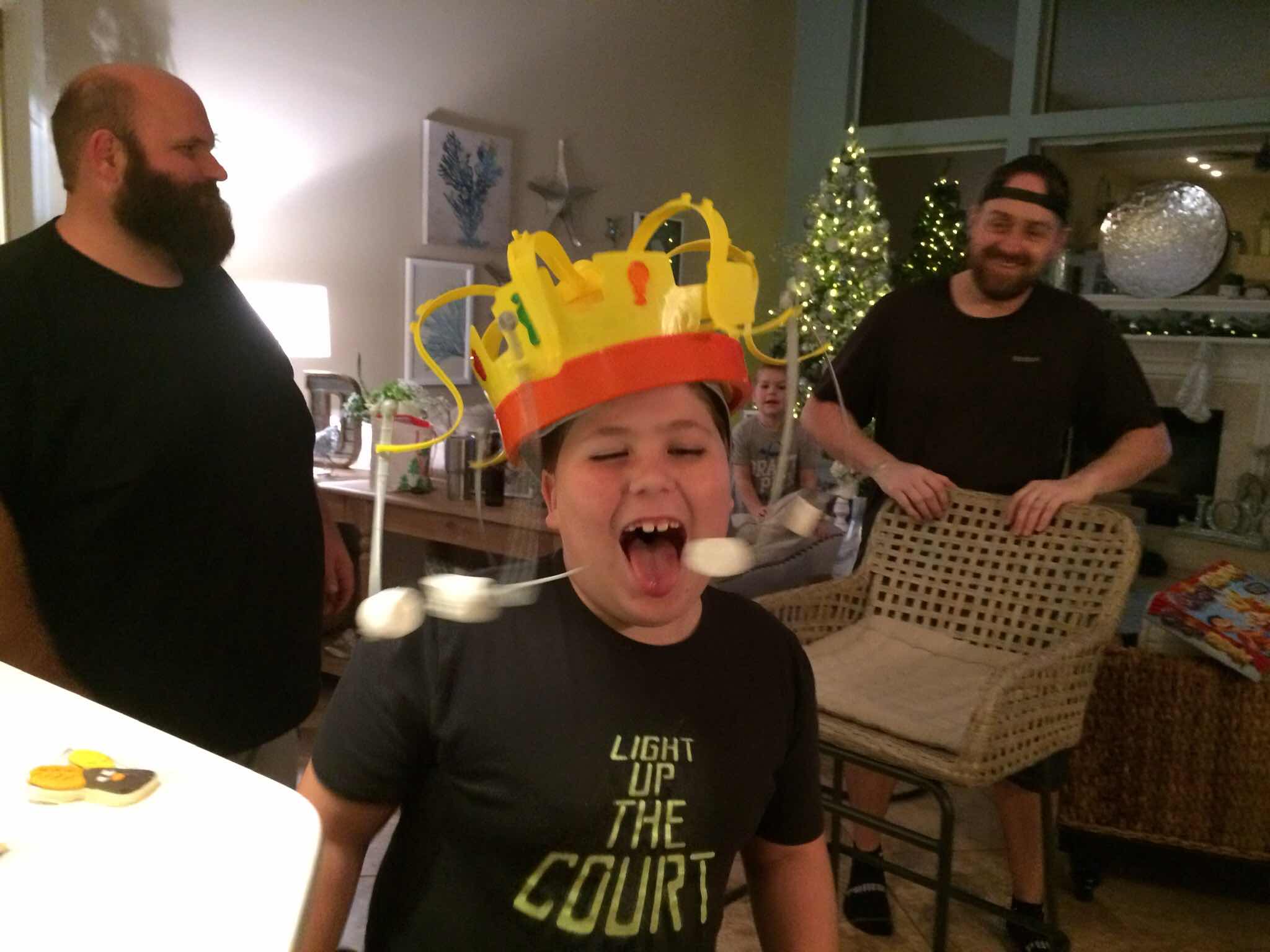 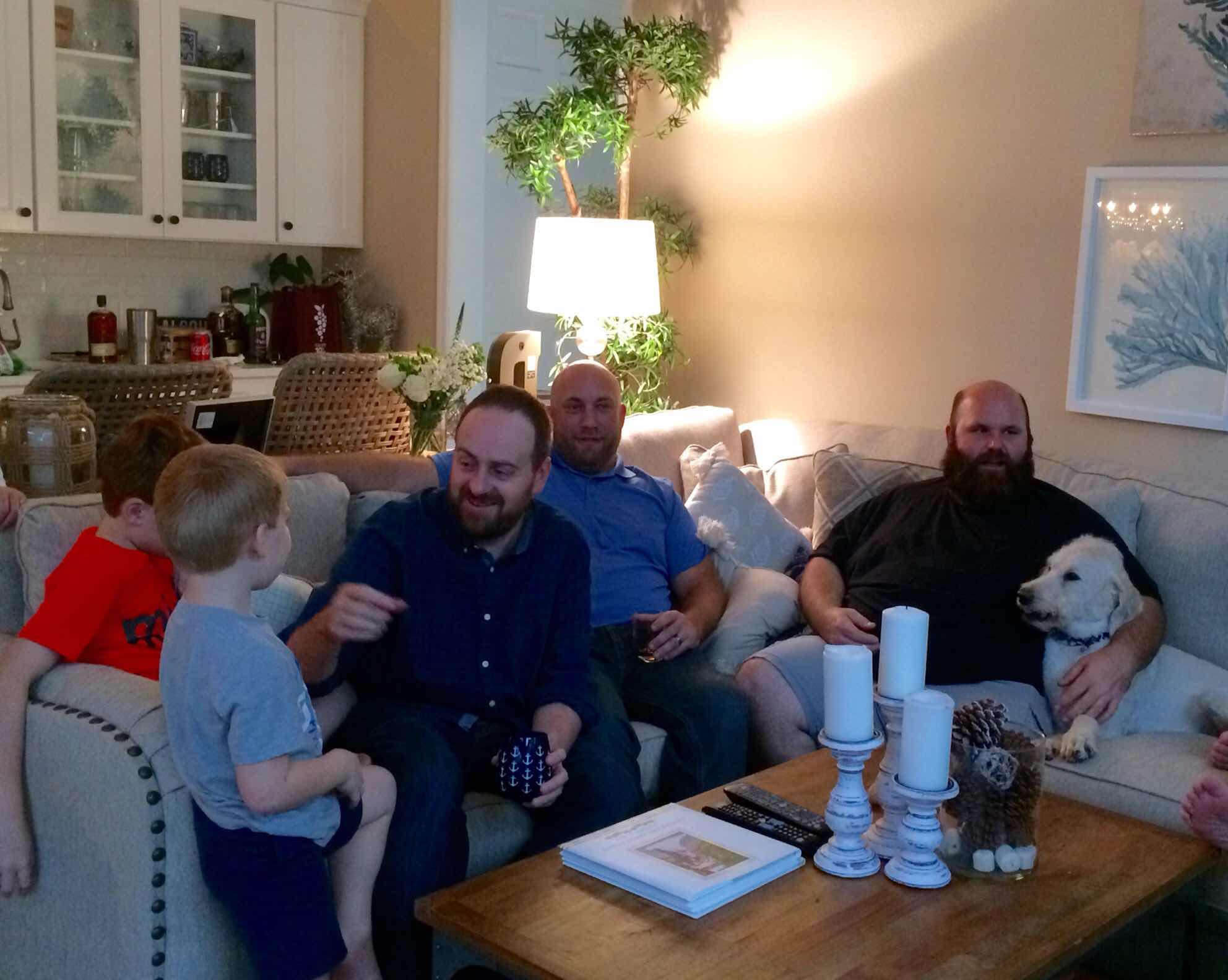 Visited.  A lot.
( the bros-in-law )
We were gone three days and of that, 20 hours were spent driving (shew!), and now we're home, back at our computers, trying to make up for overindulgence at the gym and veg section of the grocery store.  But in reality, ya know ... 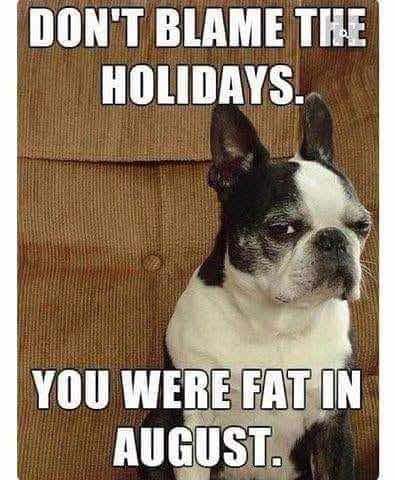 Advice from ME:
Whether you celebrate Thanksgiving as a holiday or not,
count ALL your blessings and
eat ALL the goodies!
Happy Thanksgiving to all my dear blogging friends!!!
Posted by Cynthia at 6:22 PM 15 comments: 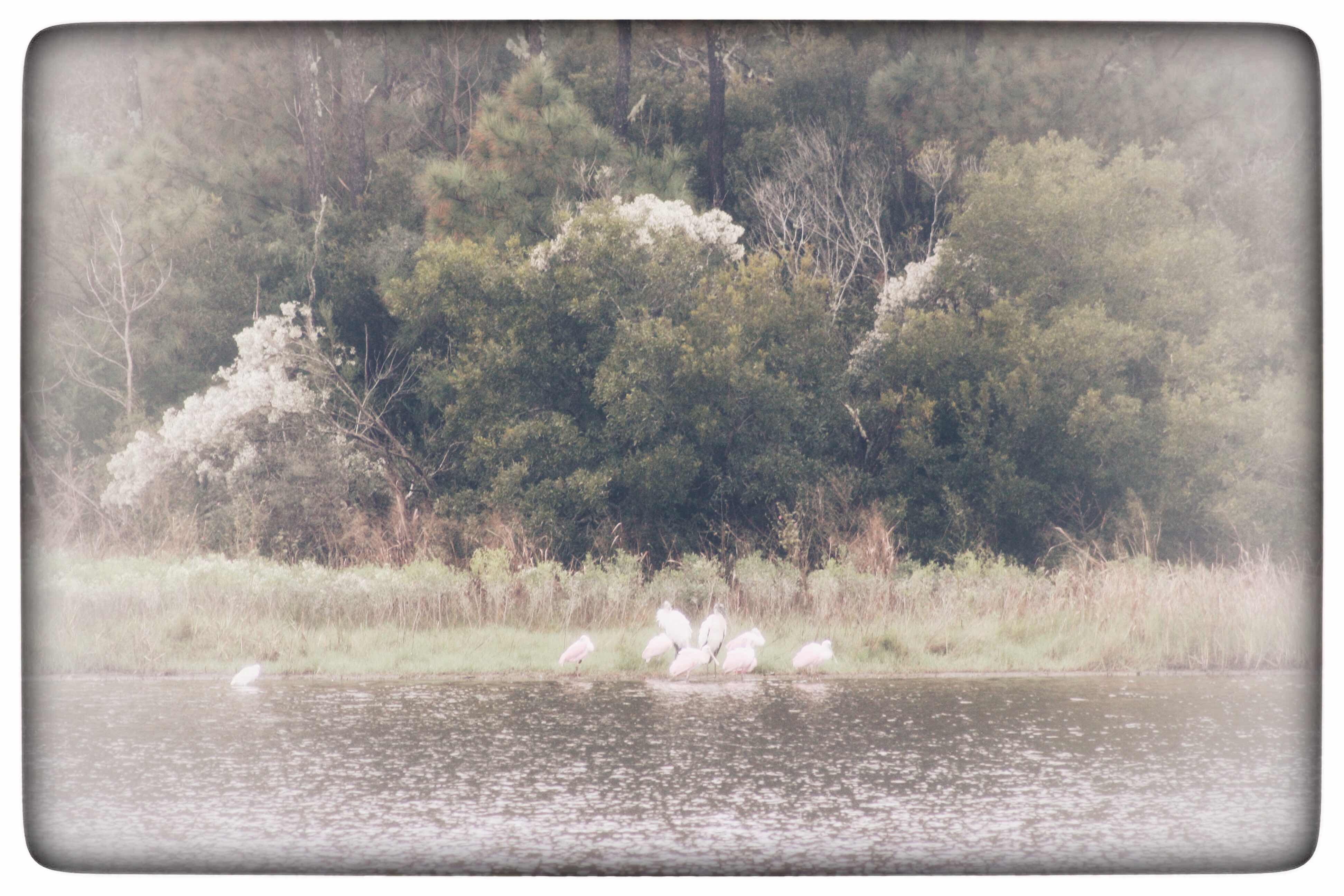 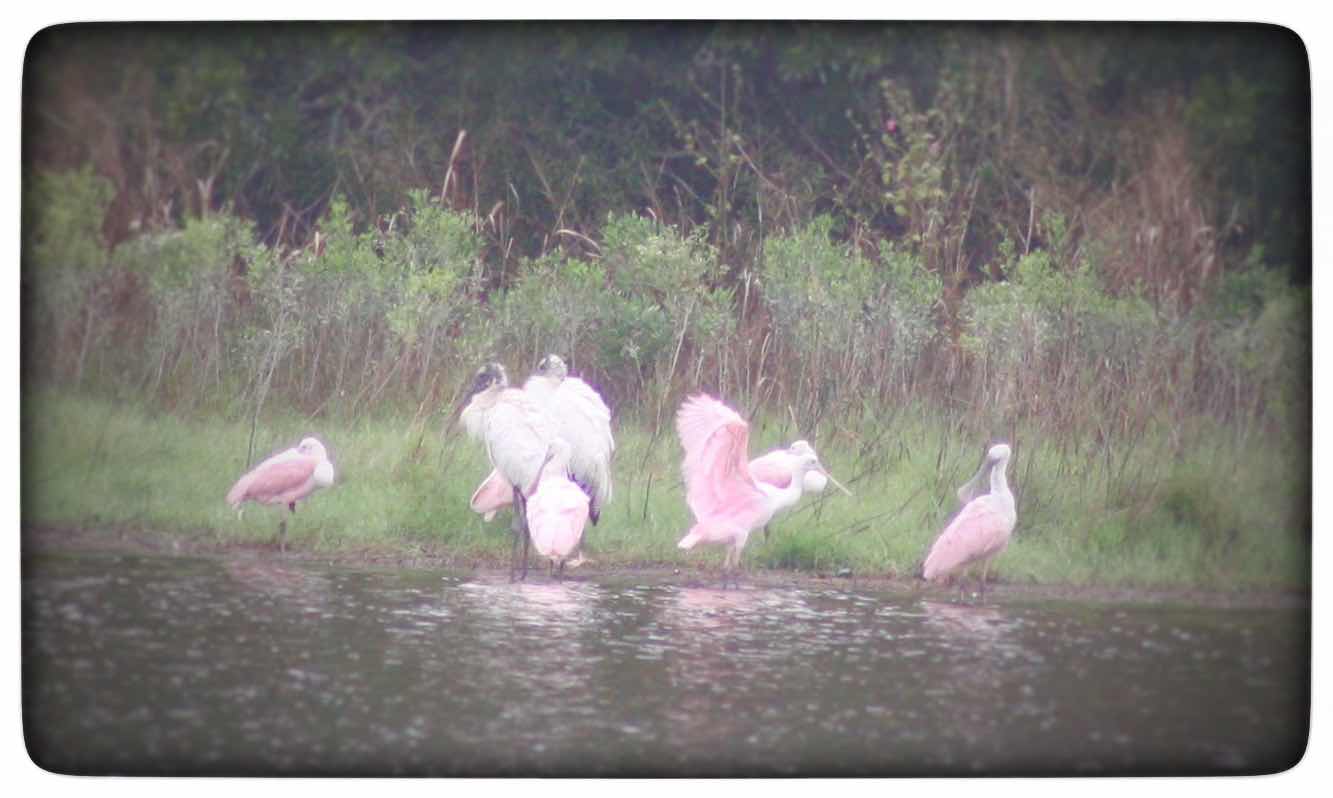 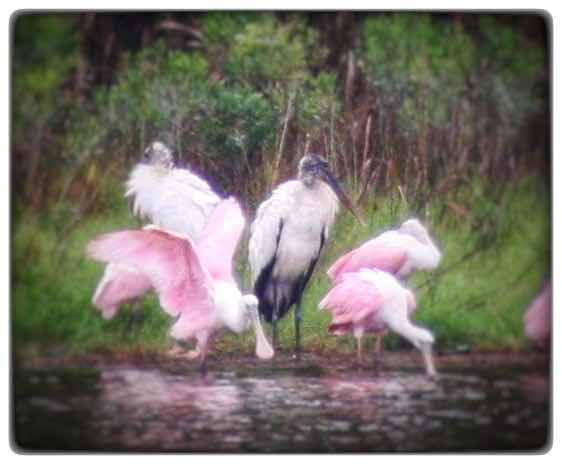 From Paradise to Hell

By now I'm sure most of you have seen and heard about the holocaust of fires in California.  My cousin Carrie and her family lived in Paradise, the town of 25,000 that burned to the ground. 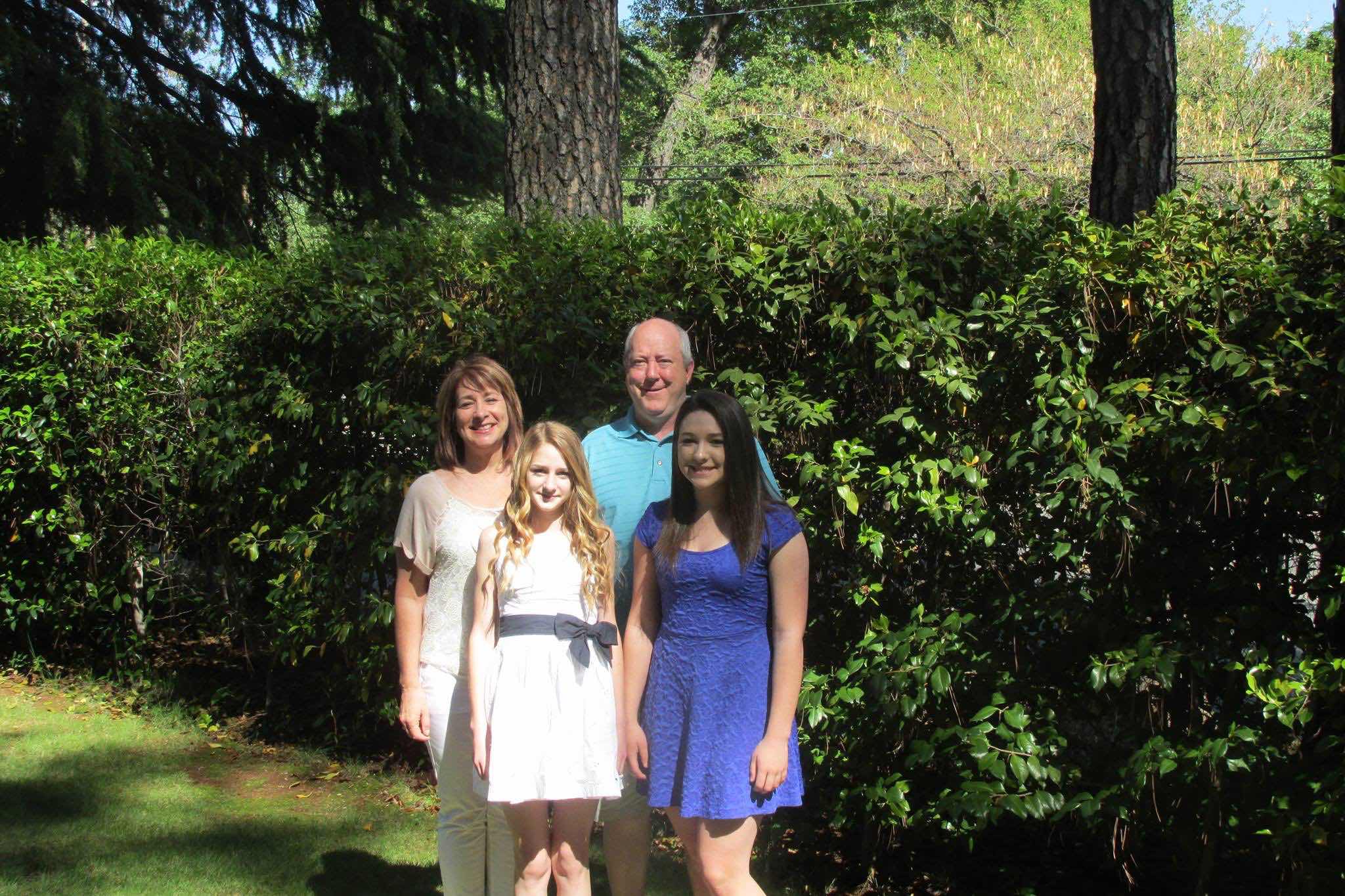 They escaped with their lives (and nothing else) by driving miles through a tunnel of fire and abandoned cars, an inferno of heat and flames, with explosions of tires from the hot pavement and trees falling in their path.
Carrie and her sister and I and my sister grew up together.  Our families were extra close because we are double cousins -- her dad and my mom are first cousins, my dad and her mom are first cousins.
Today they were allowed in to Paradise see where their home stood.  You can still see the smoke in the air, a week later. 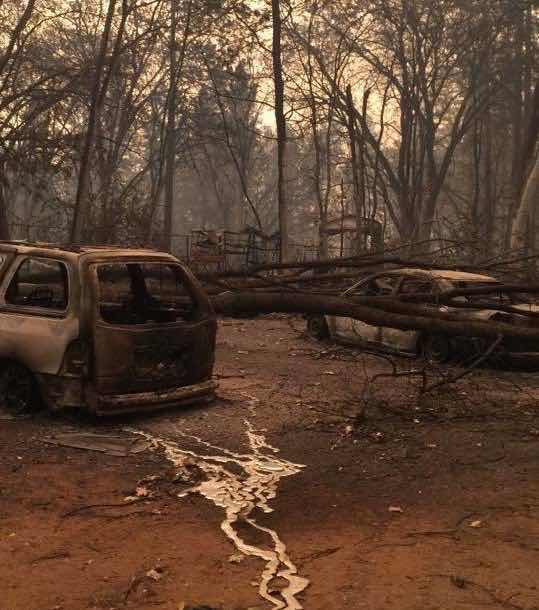 They had minutes to get out of the house and lost everything but the clothes on their backs and their two cats. Their most urgent need is for a home in the area so they can get back to their jobs and schools.  As you can imagine, it's very tough to find any kind of affordable place to rent in this situation.
As you count your blessings this Thanksgiving, if you would care to help, Carrie's grade school friends have set up a GoFundMe page for the family here:
Paradise Fire Carrie
Posted by Cynthia at 4:26 AM 12 comments:

How Are You Today? 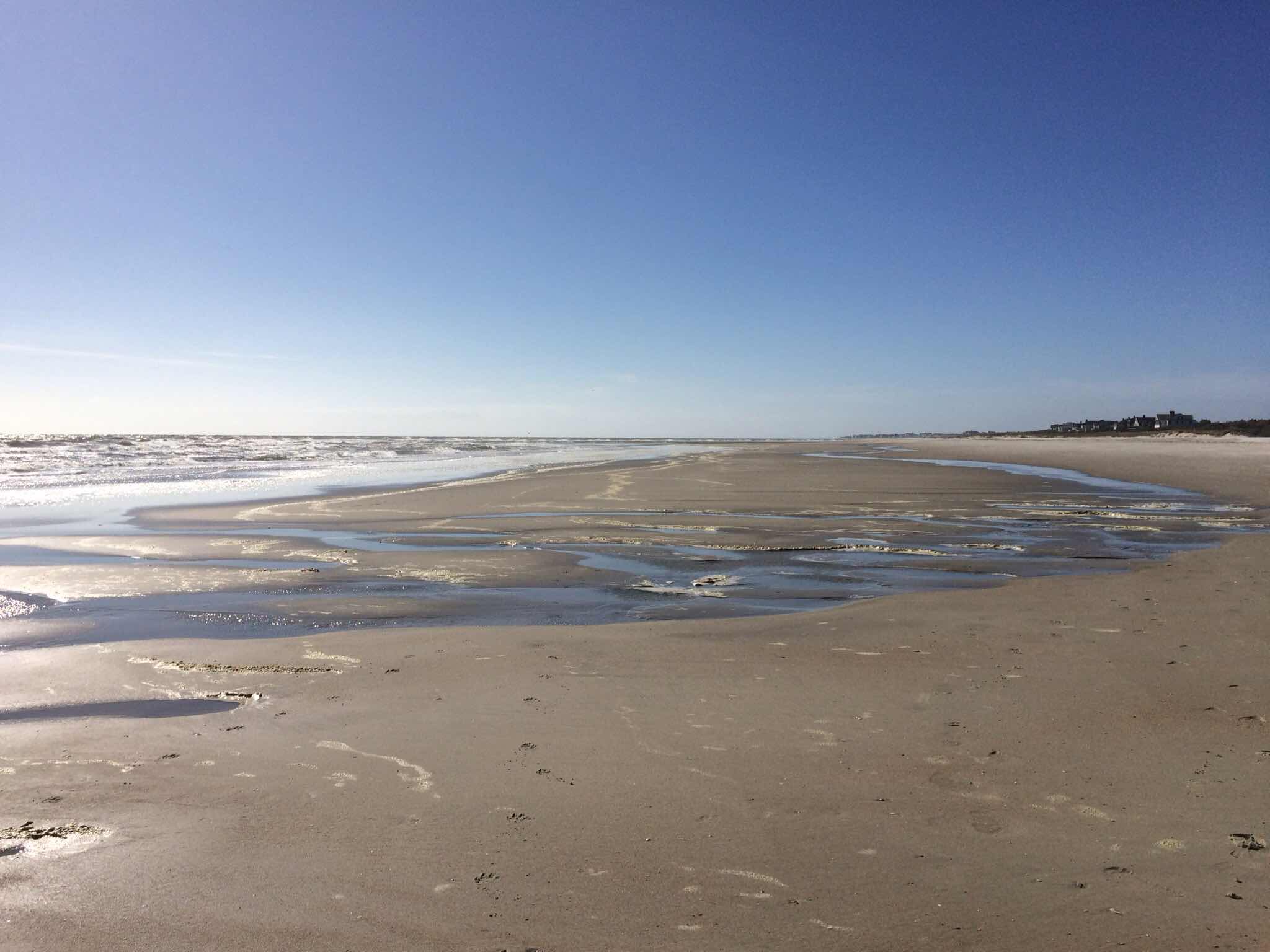 The winter beach
Midterm elections.  The day after the day after.  First off let me say, I am neither a Democrat nor a Republican.  I have voted in every single Presidential election since I was 21 and I voted my conscience.  In recent months, we (the Writer and I) signed petitions, wrote letters, made phone calls, put out signs, talked to neighbors, read, and listened to as many Americans as we could.  We voted.  We nervously watched the results.
I want to have hope for this country.  I want to understand women willing to vote for men who disparage women, men who have insulted and assaulted them, their daughters, mothers, friends.  I want to understand those who feel it is moral and right to lie when it suits their cause.  I want to understand those who believe the right to own murder weapons is more important than the rights of children to be safe in school, worshippers in churches, shoppers in malls.  I want to understand why some feel so threatened by brown people, families seeking asylum, transgender men/women.  I have been trying, I really have.
The hope I have today isn't huge but it's a little more than I had a couple days ago.  I am relieved that my health insurance is probably safe for another two years with the new majority in the House, and maybe my Social Security, too.  It's good that with the new majority in the House, some balance of power will be restored.  I'm glad to know two Somali Muslim women -- one from Minnesota where I volunteered in this immigrant population -- are among the new representatives elected.  I am pleased that first Native American woman was also elected to the House (I just learned there were two!).  Isn't it about time?
How are you feeling after the midterm elections?
Posted by Cynthia at 1:45 PM 15 comments:

In the early 1800s settlers dammed the Reedy River in Laurens County, SC to build a grain mill for families settling nearby.  With impending Hurricane Florence dulling the skies we set out, hoping to find some remains of Boyd's Mill.  We could soon hear rushing water and, after a short hike down a steep, washed-out road, we rounded a bend to meet up with a horrible stench (we never found the source) and this surprise: 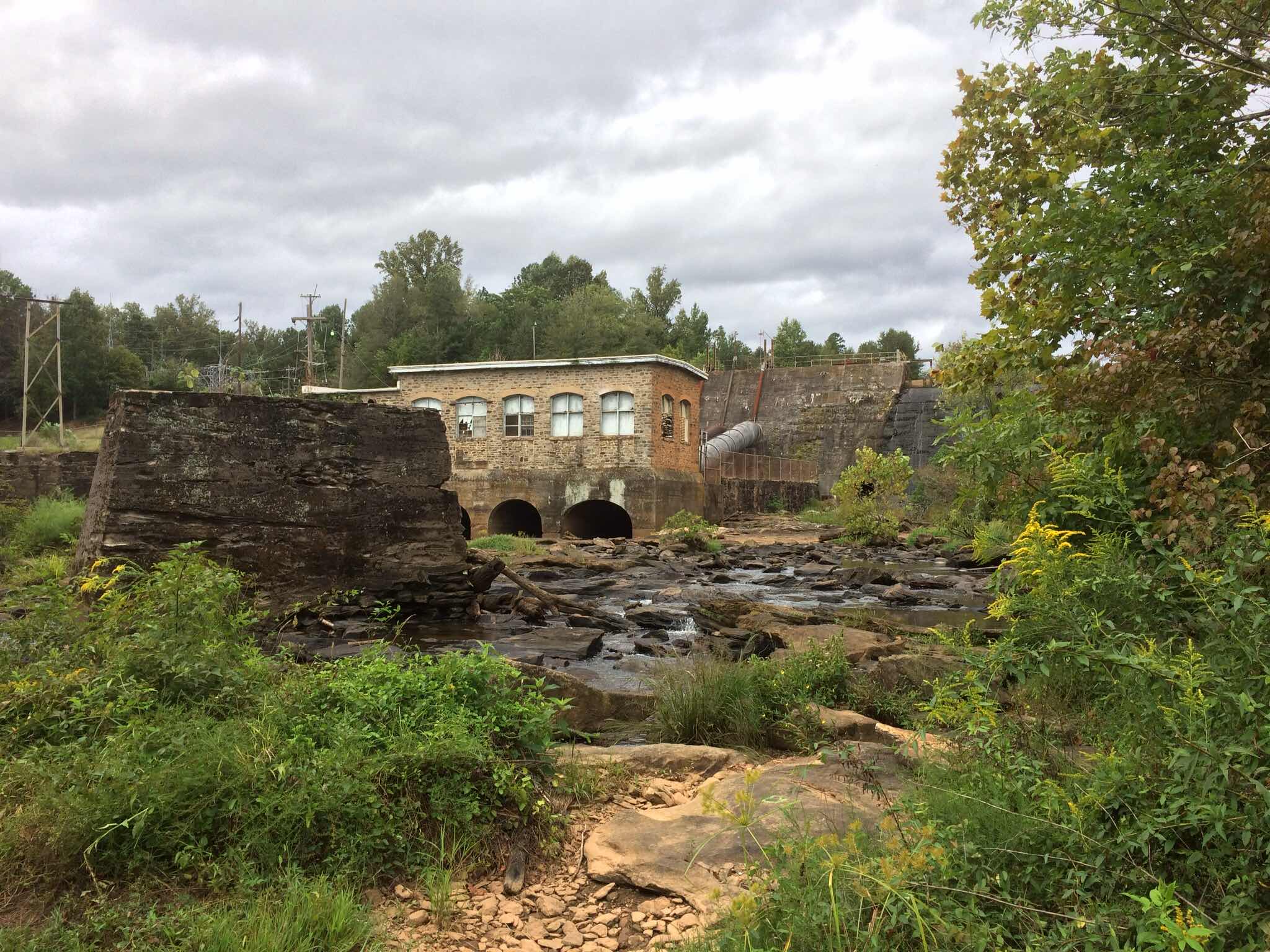 a 1907 hydroelectric dam, replacing the grist mill and itself looking abandoned years ago. The remains of an old road bridge stand in the foreground. 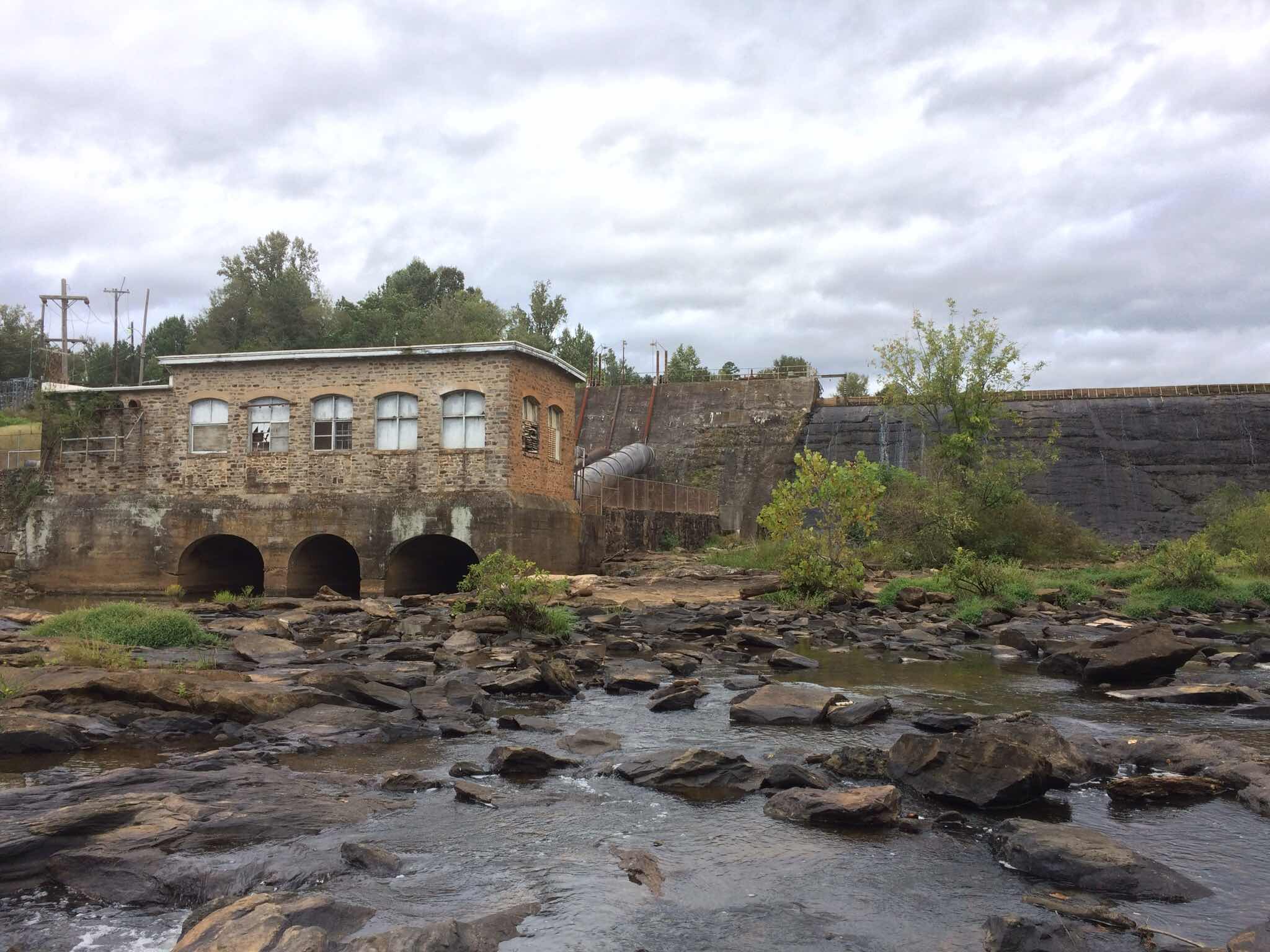 It's a very long dam, extending farther than I could see playing hopscotch on the rocks, out beyond the trees at the right.
We didn't hang around long.  We enjoyed the sound of the water but not the smell or the mosquitoes.  We returned to the car and, continuing up the road, came to a modern sign, another view of the dam, and another surprise. 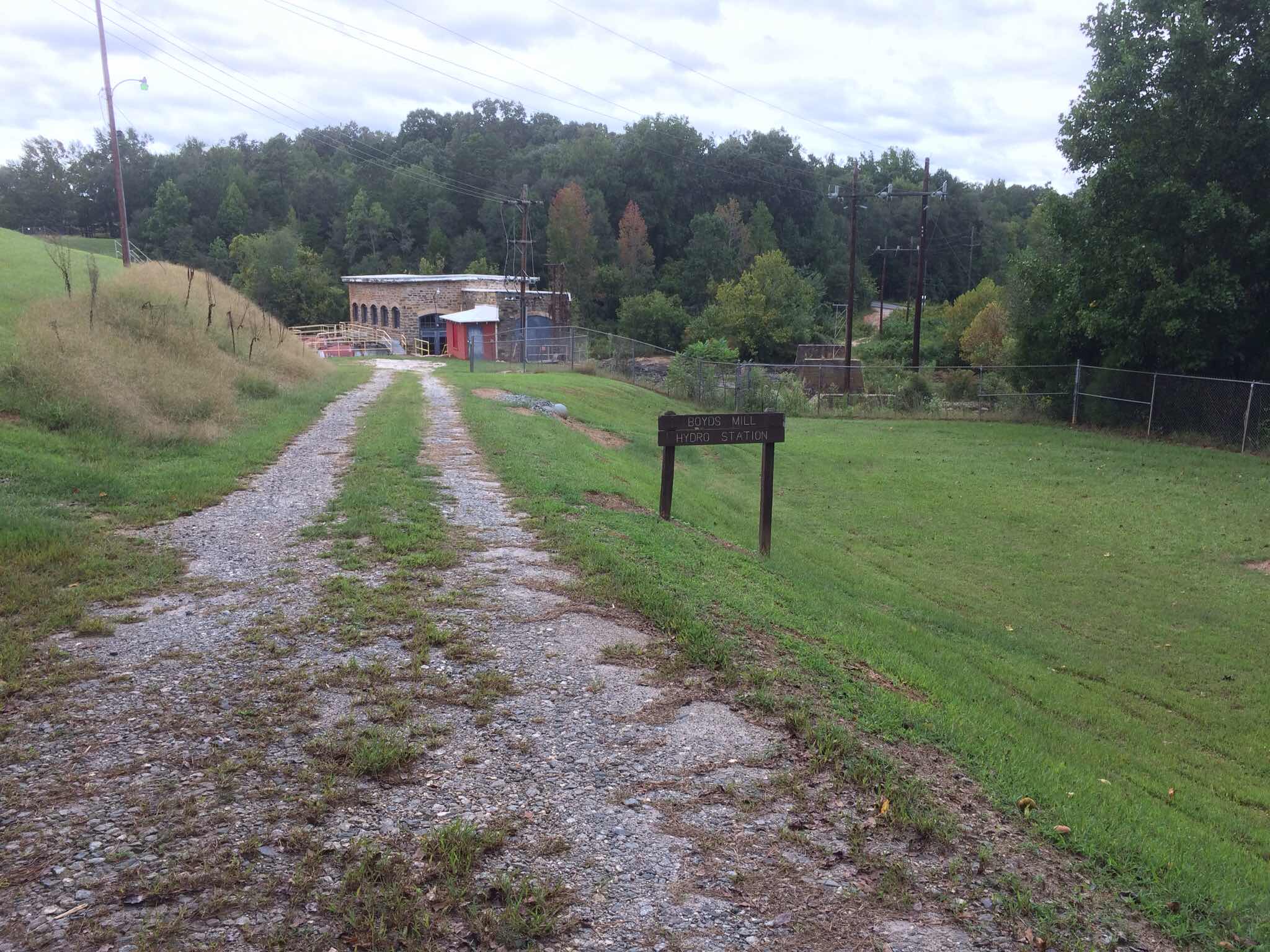 This rickety-looking dam and power plant still has functioning turbines producing electricity for Laurens County!
In the fall of 2015 in torrential rains fourteen dams in the Columbia, South Carolina area failed.  Twelve lives and a tremendous amount of property were lost.  Maybe it's just me, but I'd be a little nervous if I lived downstream from this one!
Posted by Cynthia at 8:50 AM 13 comments: