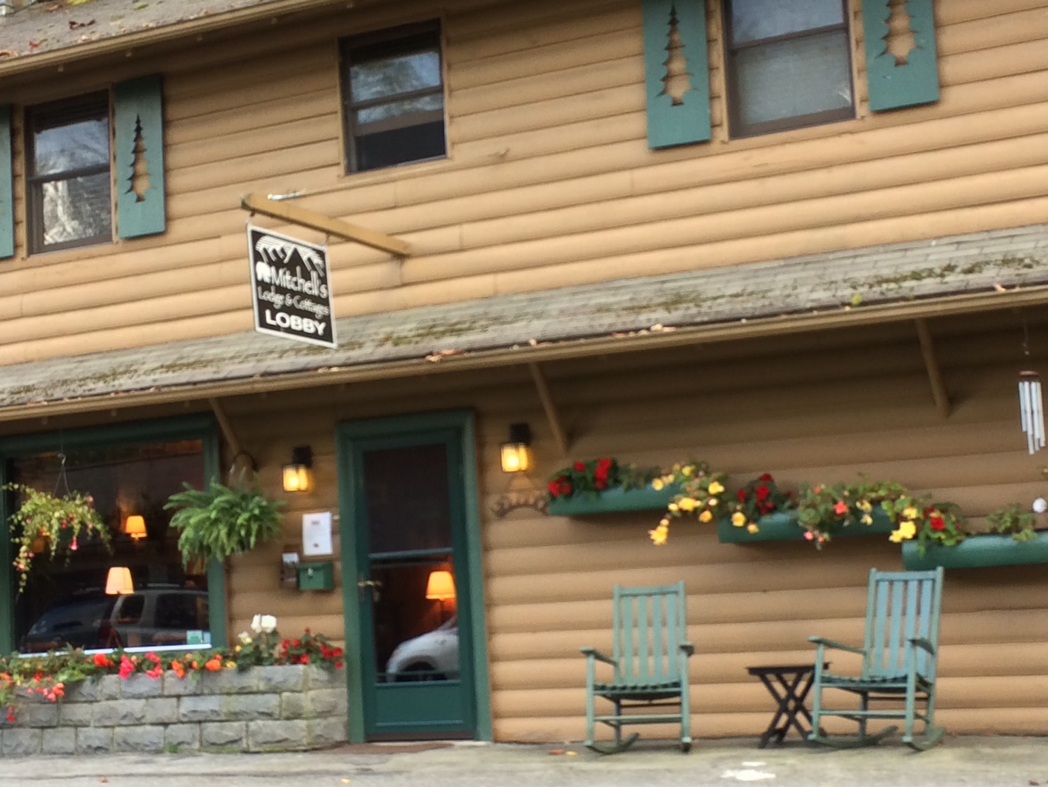 Denny Gross, you guessed right, the Smoky Mountains of western North Carolina.  We stayed in Highlands in a lodge that was on several acres with a noisy stream right outside our window and a small lake,
an outdoor dining room ... 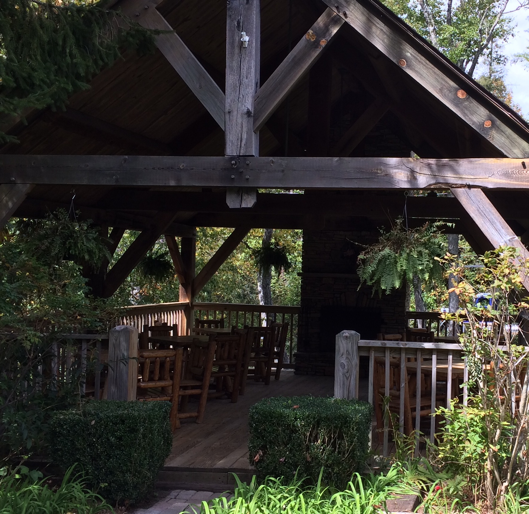 and a little porch right over the stream, nestled in the rhododendrons, for reading
and writing and drawing called
The Secret Spot. 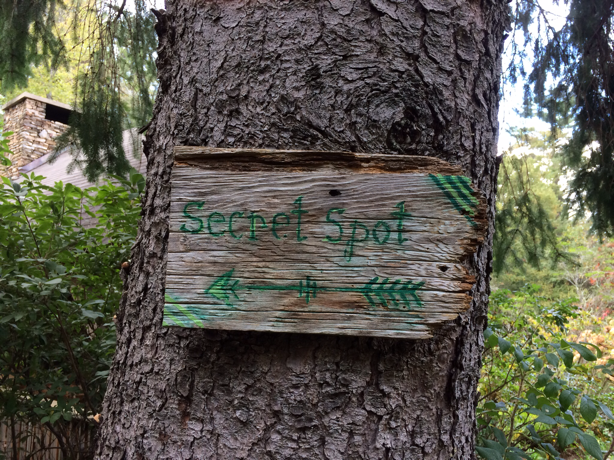 "Break clear away, once in awhile, and climb a mountain or spend a week in the woods. 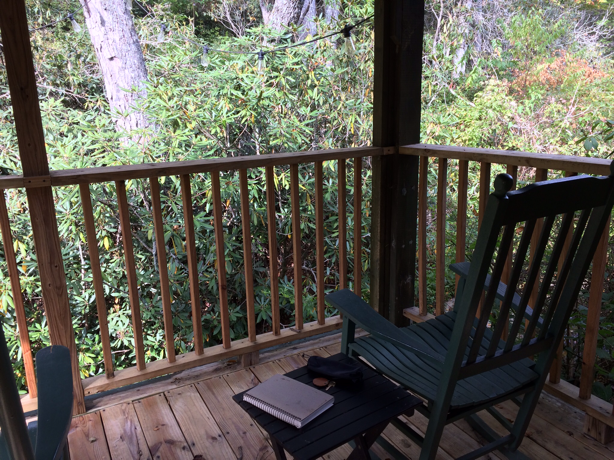 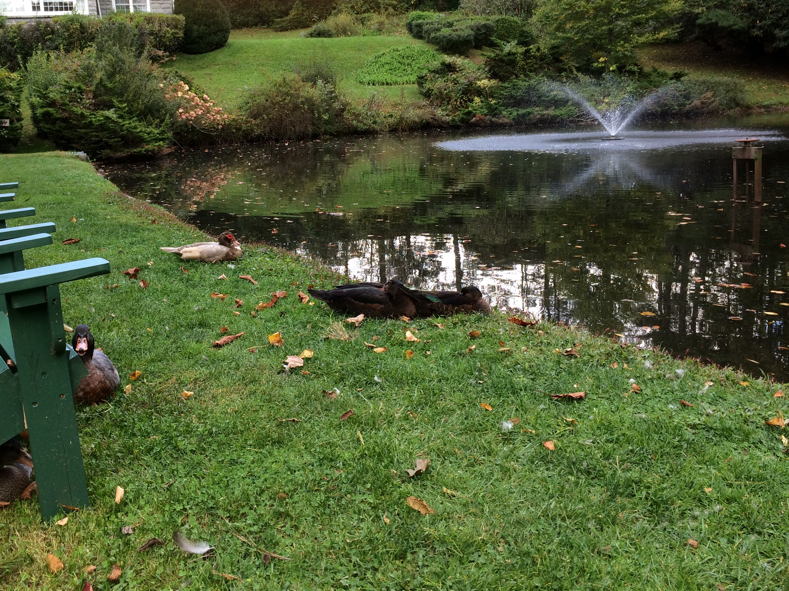 The ducks are very tame.  At eight every morning, when the dining room opens for breakfast for guests, a couple dozen ducks waddle up from the pond, across the parking lot in a line, and wait for the owner to come out and give them their morning corn.  If it isn't forthcoming quick enough, they get very noisy!
In 1875 two gentlemen from Kansas purchased the land they named Highlands.  The entrepreneurs were convinced that this spot, where lines drawn between Chicago and New York and Savannah and Chicago intersected, was destined to become the next center of commerce and trade in the United States.  They missed the mark by about 130 miles.  It's called Atlanta.
Oh, well.  Instead the natural beauty of the mountains was preserved and Highlands gradually became a place for melting Southernors (like me!) to get away from the summer heat and bustle of places like Atlanta, and that's what it remains. There are lots of shops and two historic inns in the village.  The Highlands Inn opened in 1880 and has been restored to its original state with antique furnishings, wall coverings, and stenciling, and is in the National Registery of Historic Places.  The other, Old Edward Inn, was built in 1878 as a boarding house and over the years has grown to cover at least a city block with swimming pools and spa facilities and I don't know what all.  We peeked in the front door of one of the old parts and it was a lobby that looked like it had been furnished in the 1920s.  The rest of it is new and very modern.
We went hiking and took some driving trips and I'll have some pictures of the mountain scenery next time.
Posted by Cynthia at 12:44 PM 16 comments:

In a temperate rainforest ... 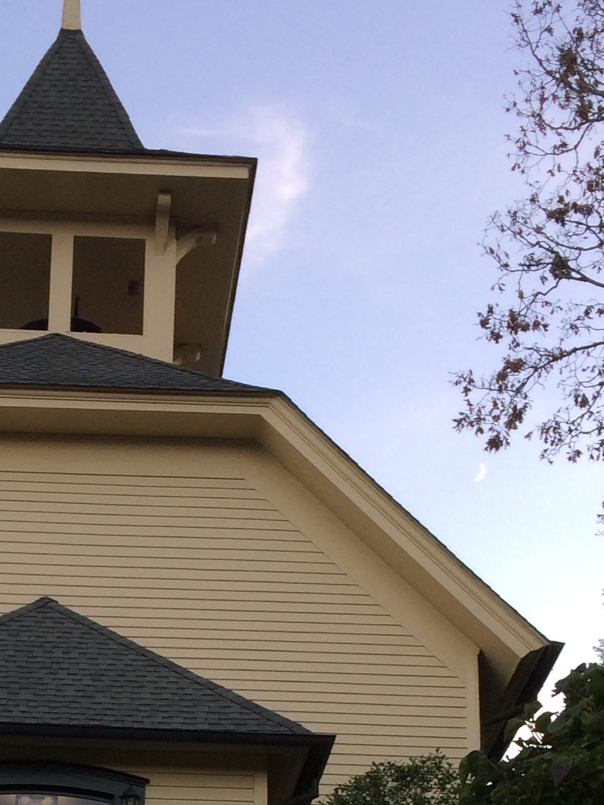 Lichen capital of the WORLD ... 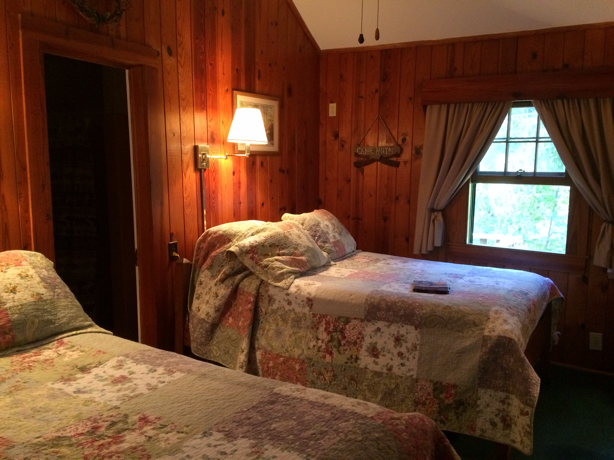 Salmander capital of the WORLD ... 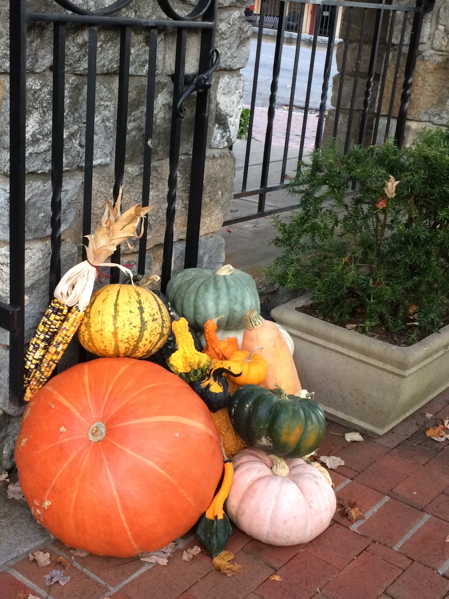 It seems like nothing in the South is ever purposefully torn down.  Buildings are left in peace to pass away in their own time, to fade into the background under encroaching vines, lean and sag into the sand, succumb to saplings that grow right up through the floors  and 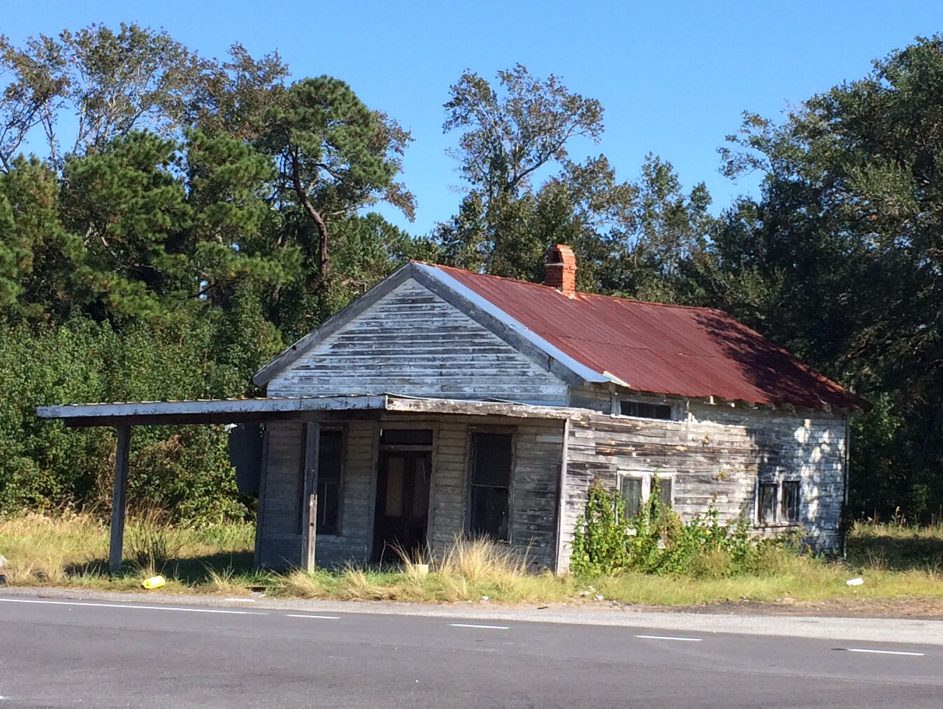 shoulder them off their foundations. Next to go is the roof, piece by piece of rusting tin, first lifted and loosened, then flying right away in the hurricanes.  Finally the rains soak the wood and, helped along by the termites and sow bugs, the  millipedes and carpenter ants, they turn to dust and disappear into the earth.
Bonnie's Barn on the highway to Charleston was a country store from the early to late 1900s, owned and run by Bonnie Thames.  Bonnie was one of three brothers who owned stores in the area.  On the hour drive between Charleston and the next town, Georgetown, it was a place for touring motorists to stop for gas and a cold Coke on the trip through the Francis Marion National Forest on the way to the hunting camps and Myrtle Beach fun.
Bonnie Thames must have sold plenty of gas and Cokes because here is his once-fine home next door. 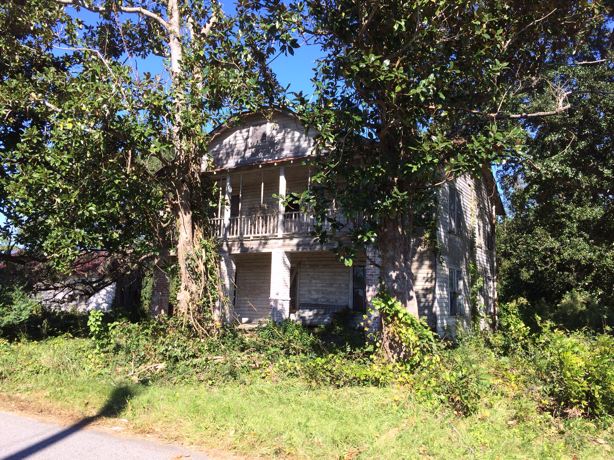 The old Southern mansion is and was the lone home for miles around. It is surrounded by protected wetlands, pine forests, and old rice fields near the Santee River. 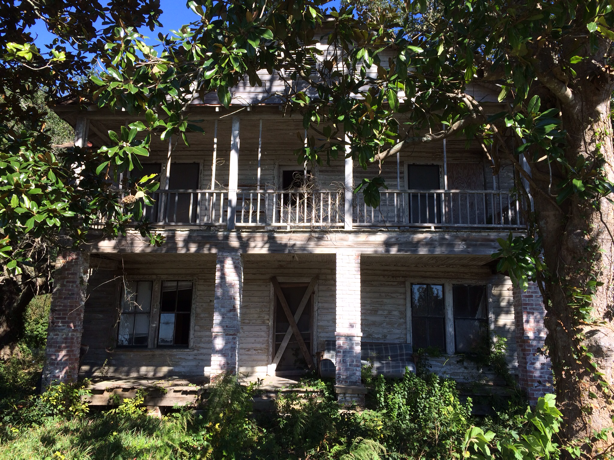 It's easy to imagine evenings and Sunday afternoons on this porch, sipping sweet tea and watching the cars on the highway that runs up the coast from Florida to Maine, US. 17.  I wonder if the rooms upstairs might have been used as lodging for travelers in those days gone by.
Posted by Cynthia at 12:32 PM 14 comments:

All is Calm, All is Bright

Thanks so much for your caring thoughts and good wishes for my mom and our safety.
lrma came through Monday with 50 mph wind gusts and rain that fell sideways, but we are just fine.  We are at 12 ft. above sea level so we didn't get any water other than puddles.  However, Front Street, the main street of our town, is right on the harbor, and it didn't fare as well. 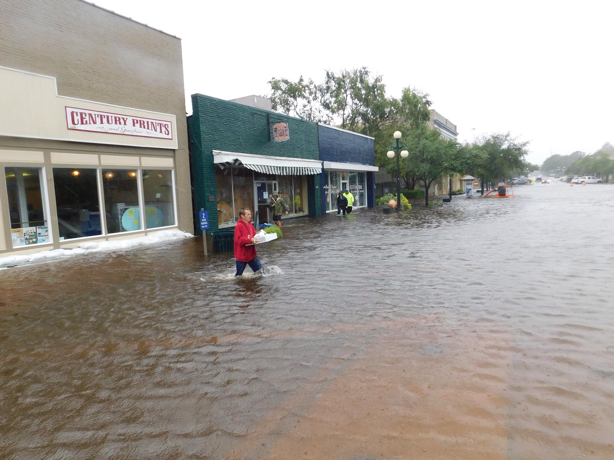 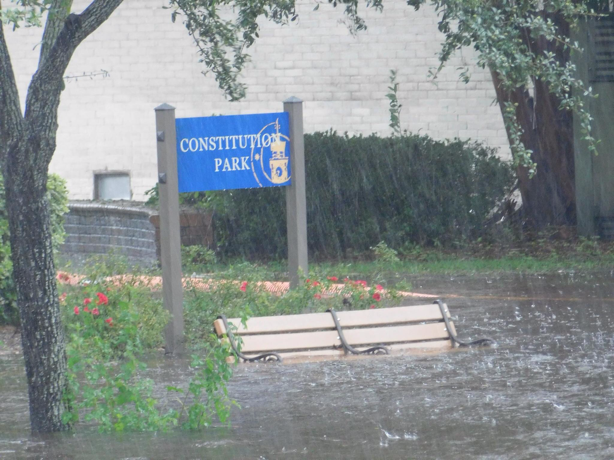 The photos were taken on Monday as the worst of the storm was just winding up.  They are from the Internet -- I was safely at home, not out walking in flood waters like some people!  The stores had been sandbagged when we went through town on Saturday so I'm hoping their inventory was spared.  We checked on the old sailboat and it came through without a scratch.
The sun is has been out and a beautiful breeze is drying things up nicely here in Georgetown.
My mom's home in Florida was not damaged by the hurricane but the electricity is still out at the care home and everyone is quite uncomfortable as the air-conditioners can't run.  At another facility in Florida five elderly people have died from the heat so we are hoping they get power back very soon.
On the Facebook page for my mom's town someone posted this yesterday:
"Have someone's white carport in my yard.
Will trade for my missing piece of tan siding."
Sometimes the best thing you can do is laugh!
Posted by Cynthia at 1:47 PM 16 comments: 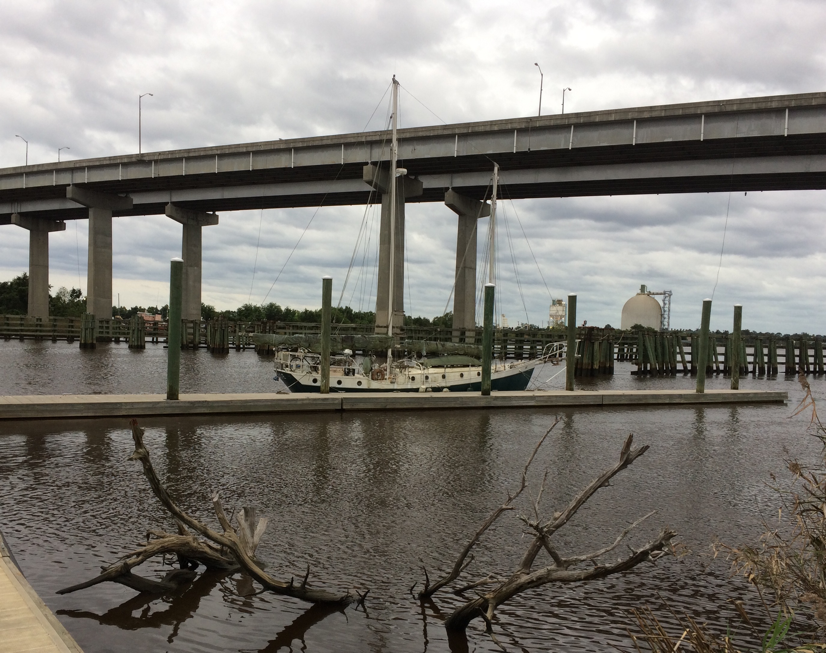 Tucked away from the salty waters of Winyah Bay, just inside the mouth of the Sampit River, this old wooden sailboat was a surprise last night when we went for a walk.  It should be safe here from the winds and waves of Irma today. 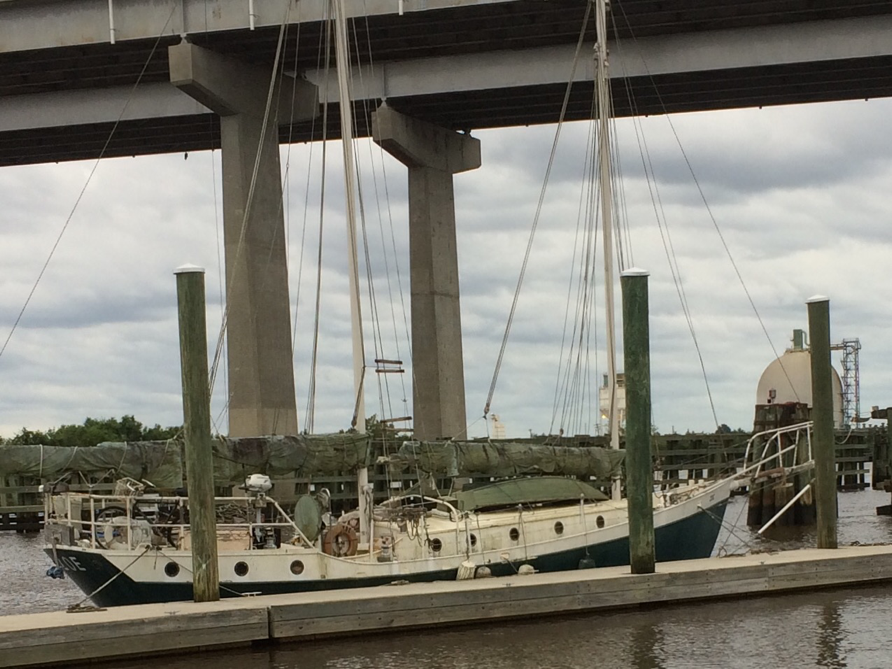 Hunkered Down, Ready for Irma

This was the view for most of our 15 hour trip home from Florida Thursday.
Normally it takes 9 hours. 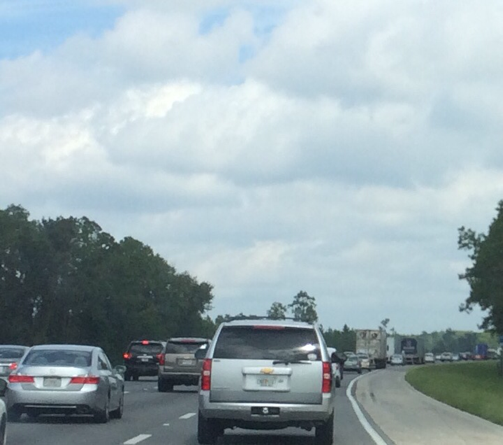 It seemed like everybody in Florida was in a car on the Interstate.  Fortunately there was plenty of gas for all.
We passed vans full of dogs and cats in wire cages being evacuated from animal shelters in southern Florida.
In the rest areas there were people walking dogs everywhere.  I've never seen so many dogs outdoors in one place.  You couldn't have paid me to walk through the grass!
The restrooms at the rest areas were unbelievable.  All the sinks were labeled , "Out of Order", and the toilets and floors were filthy.  We brought our own food and ate in the car as we would have to walk through said grass to reach a picnic table.
And like I said, there was no way I was walking through that grass!
It was hard to leave my mom.  She is still in the rehab center which is a hurricane-proof facility so she will be safe.
We have stocked up on hurricane food (anything that cooks in five minutes or less) and a few treats, flashlights, camp stove fuel, gas for the grill.  We will not get the full brunt of Irma, a tropical storm here instead of a hurricane, and we are grateful for that.  We will probably be without electricity as we seem to live near a very touchy substation that goes out at the least provocation.
We checked out the ocean to see how things are there.
Very windy, big surf, flying sand and foam.

I've been with my mom in Florida for the last couple weeks and had planned on staying through this weekend.  Enter Irma.  Irma, the strongest Atlantic hurricane ever with 185 mph winds, 500 miles wide.
No thanks!
The Writer will drive down today and tomorrow we will join
the traffic headed north out of here. 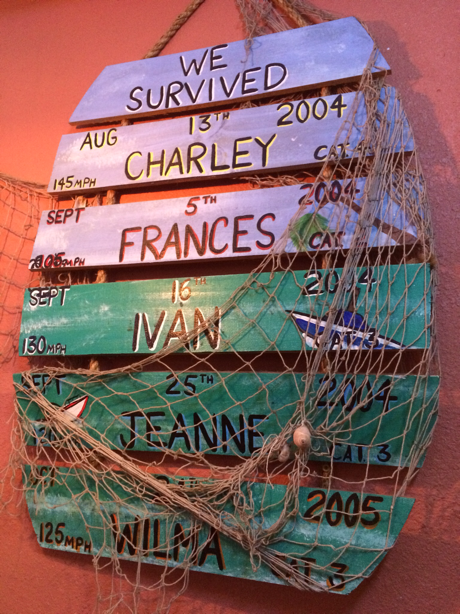 This reminder of the hurricanes that battered this area in a one year period hangs in a restaurant on the way to the care home where my mom is still staying.
There is still the hope here that Irma will wander a bit to the east away from Florida.
If so, we'll just hope it wanders far enough out to sea that it doesn't come north and
wallop South Carolina instead! 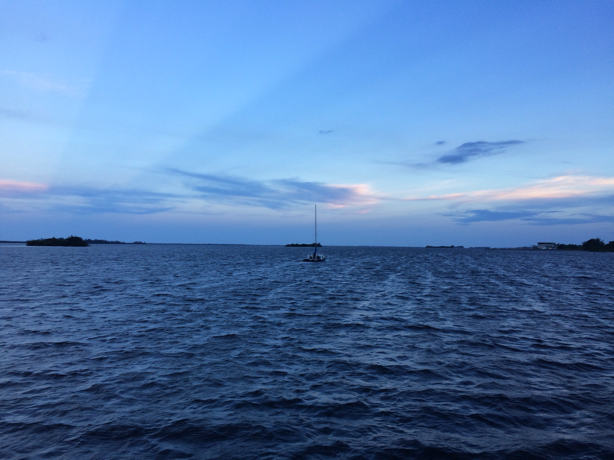 If Irma has her way, this serene scene near my mom's house
won't be so peaceful
in the next few days. 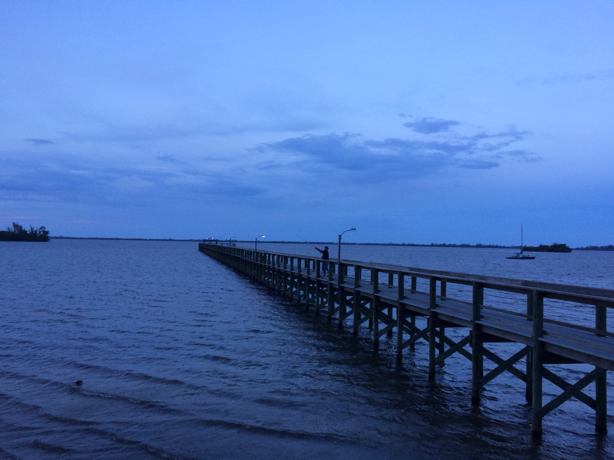