Fairs have been much anticipated highlights of every summer for at least three generations of my family, a grand finale to summer freedom before school starts.
Kids worked hard all year on 4-H projects and looked forward to displaying them at the county and state fair, winning ribbons (and prize money!) if we were lucky. 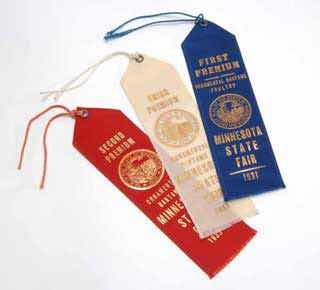 Then last summer, the summer of 2020, the unthinkable occurred: all over the States, fairs were cancelled, casualties of the Covid epidemic.

The frantic carrousel music, barkers chanting, “Step right up! Win a prize every time!”, the screams of teenage girls stuck at the top of the Double-Eight Ferris Wheel: silenced!
The aromas of hotdogs, burnt-sugary cotton candy, mini donuts, cattle barns, hot dust and horse sweat: gone!
The shivers of fear, rushes of adrenaline engulfing riders of the Zipper, the Hammer, the Riptide: unreachable for another whole year. 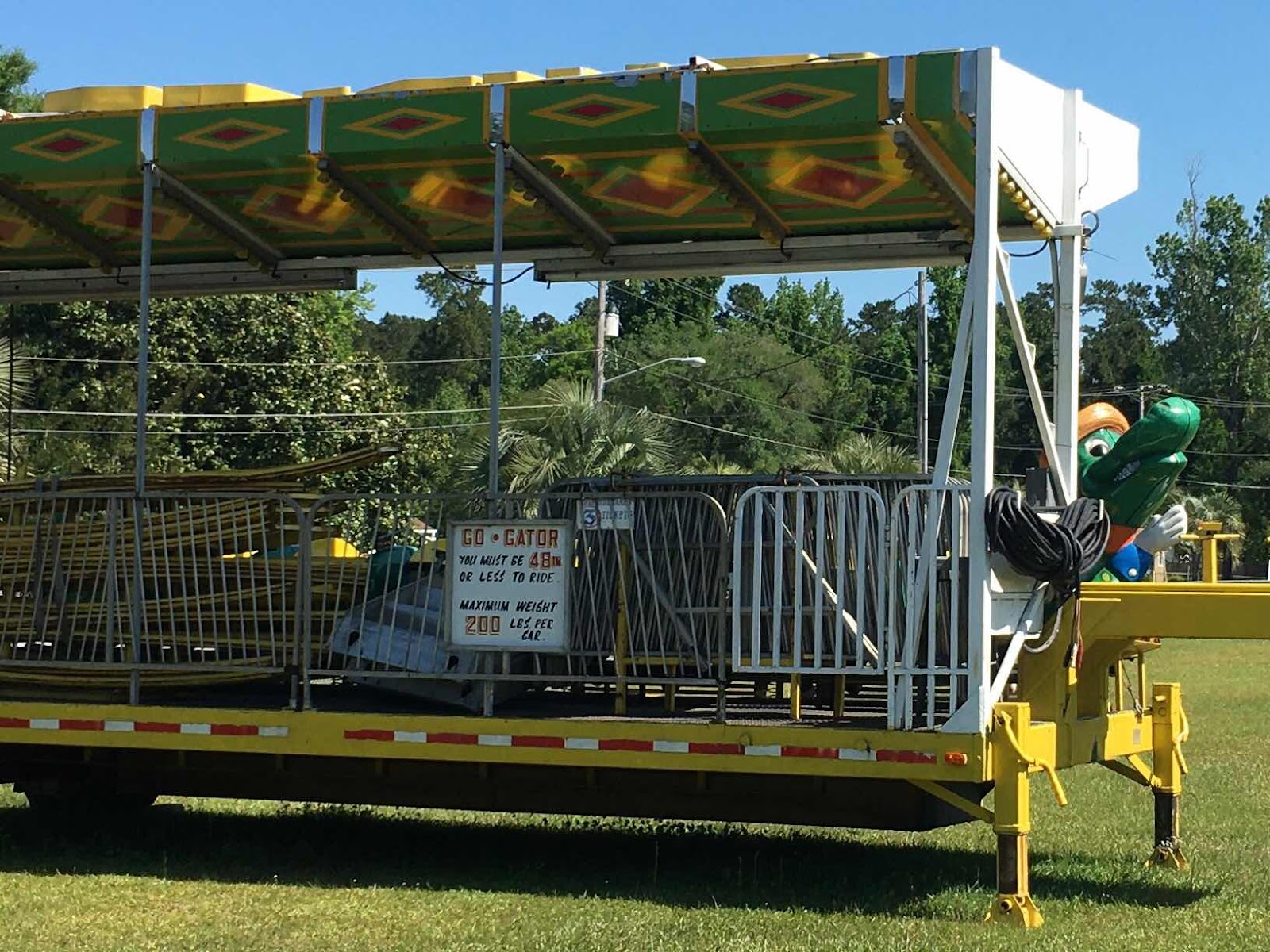 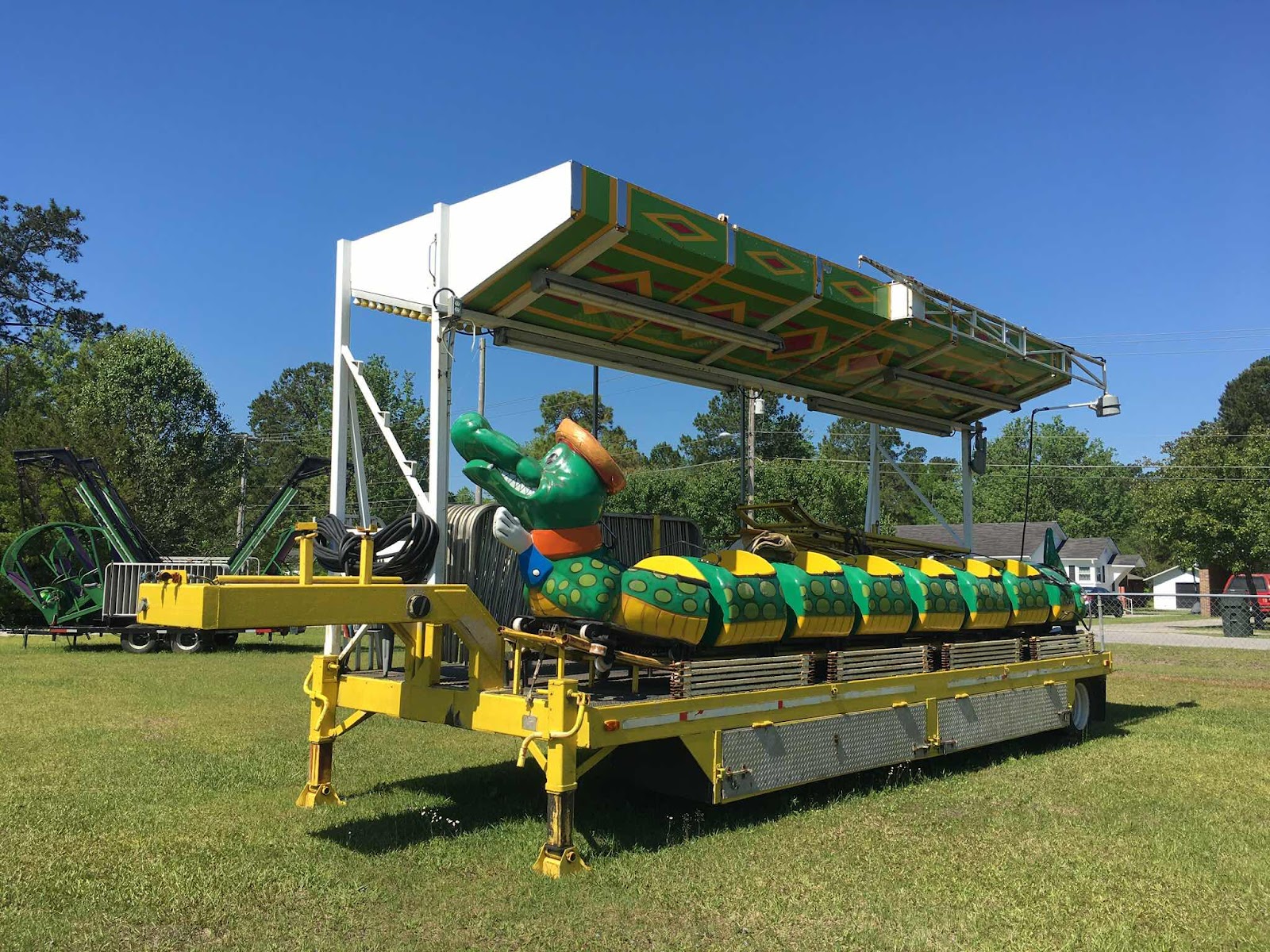 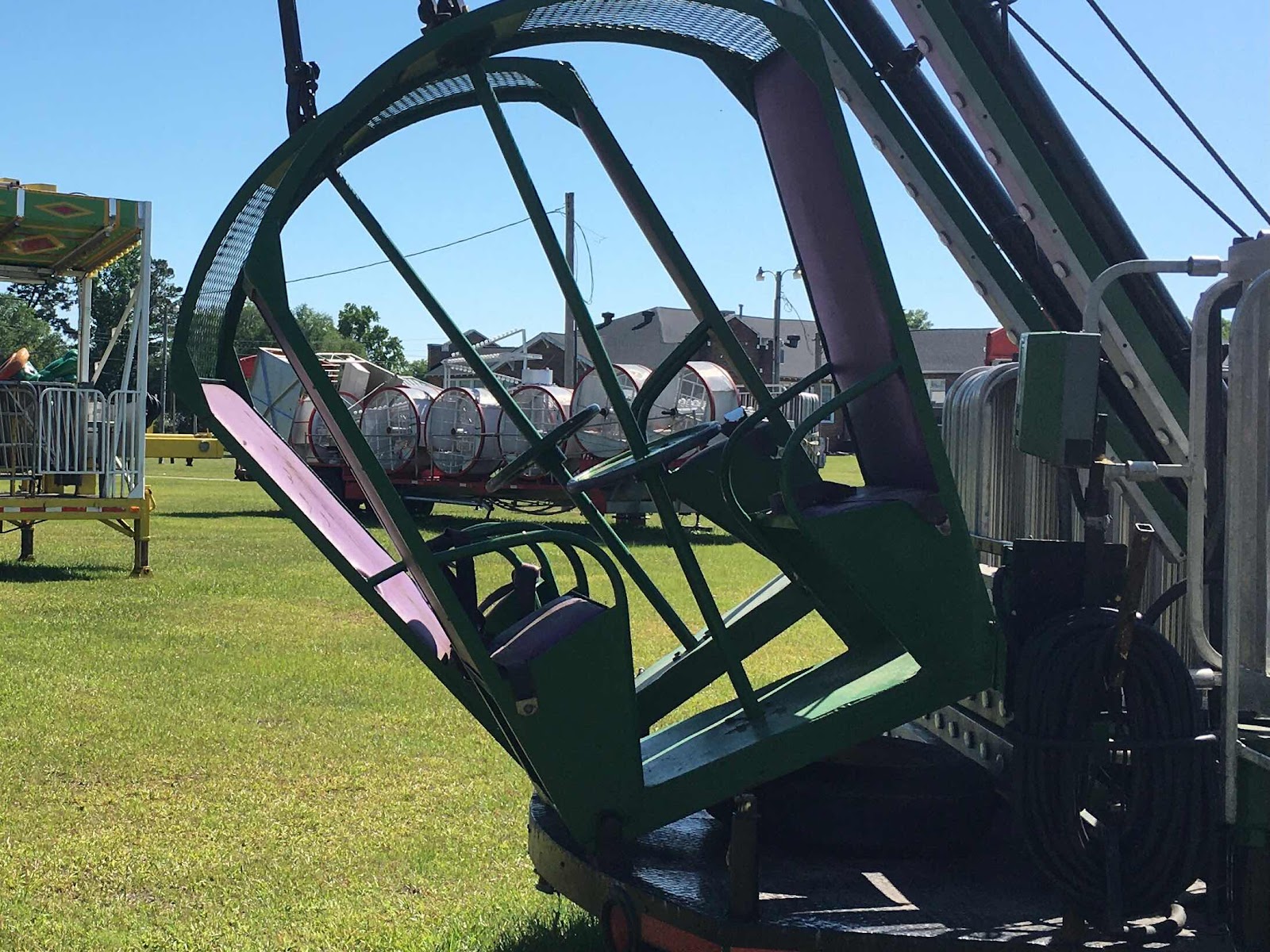 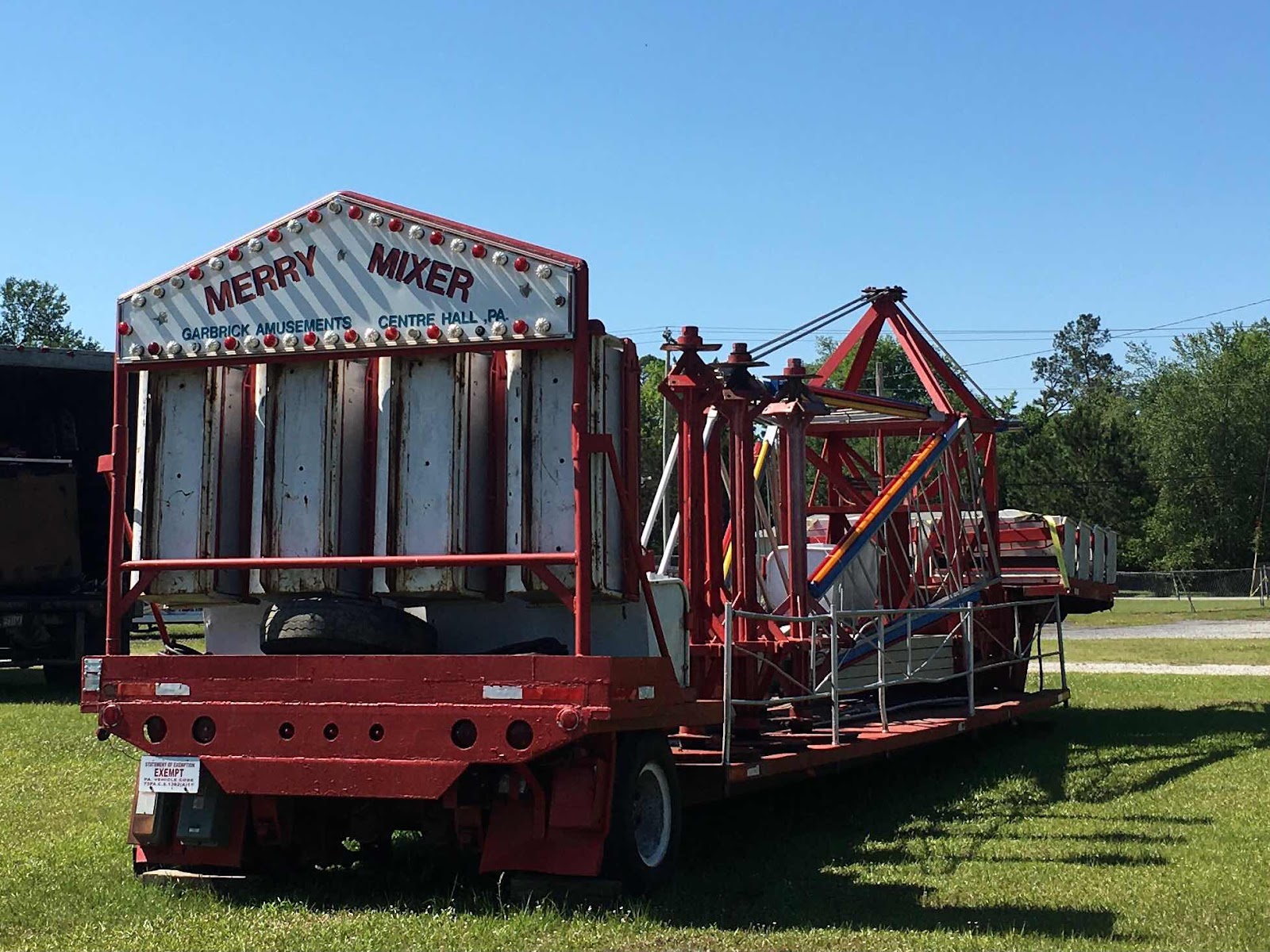 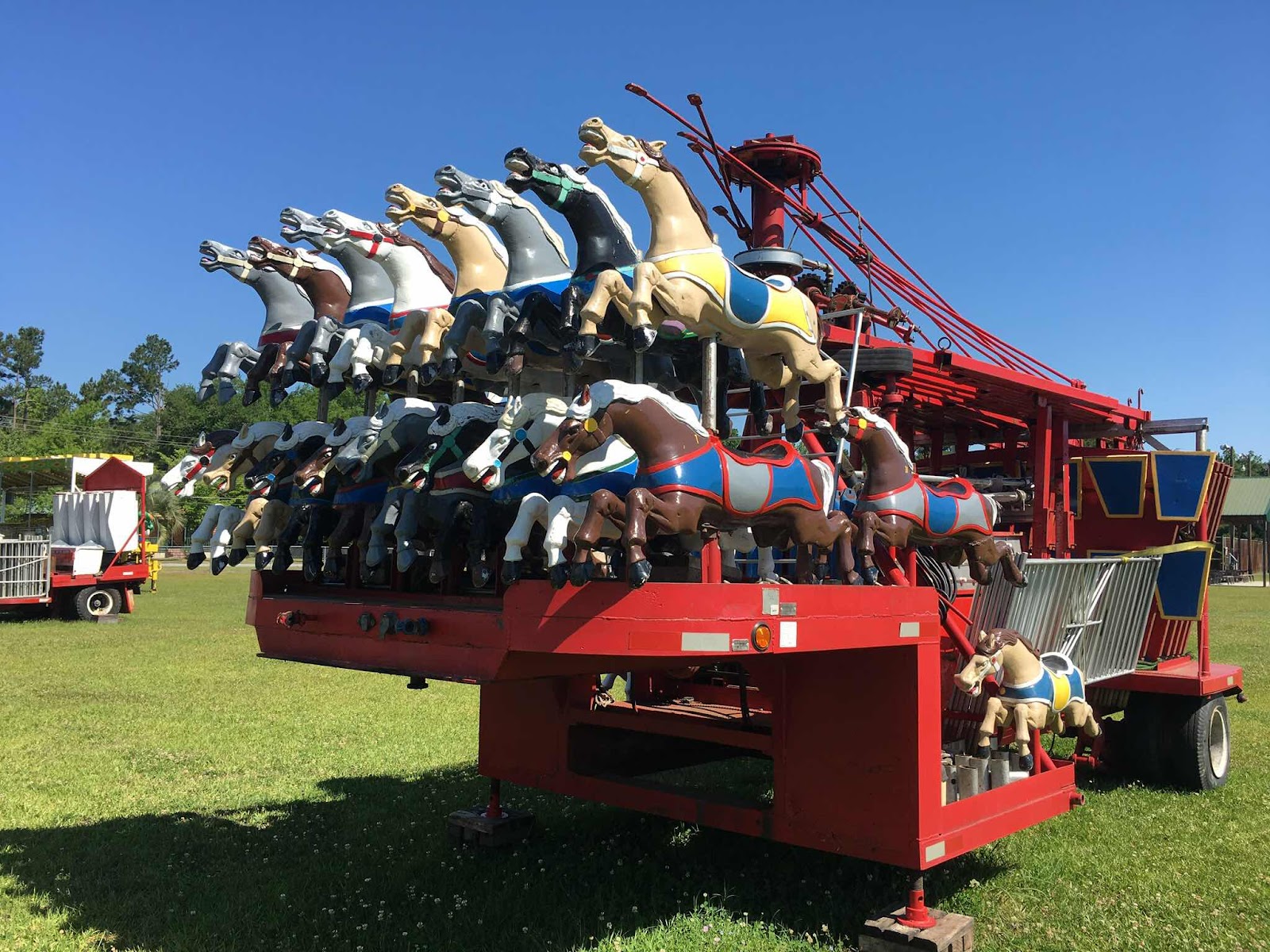 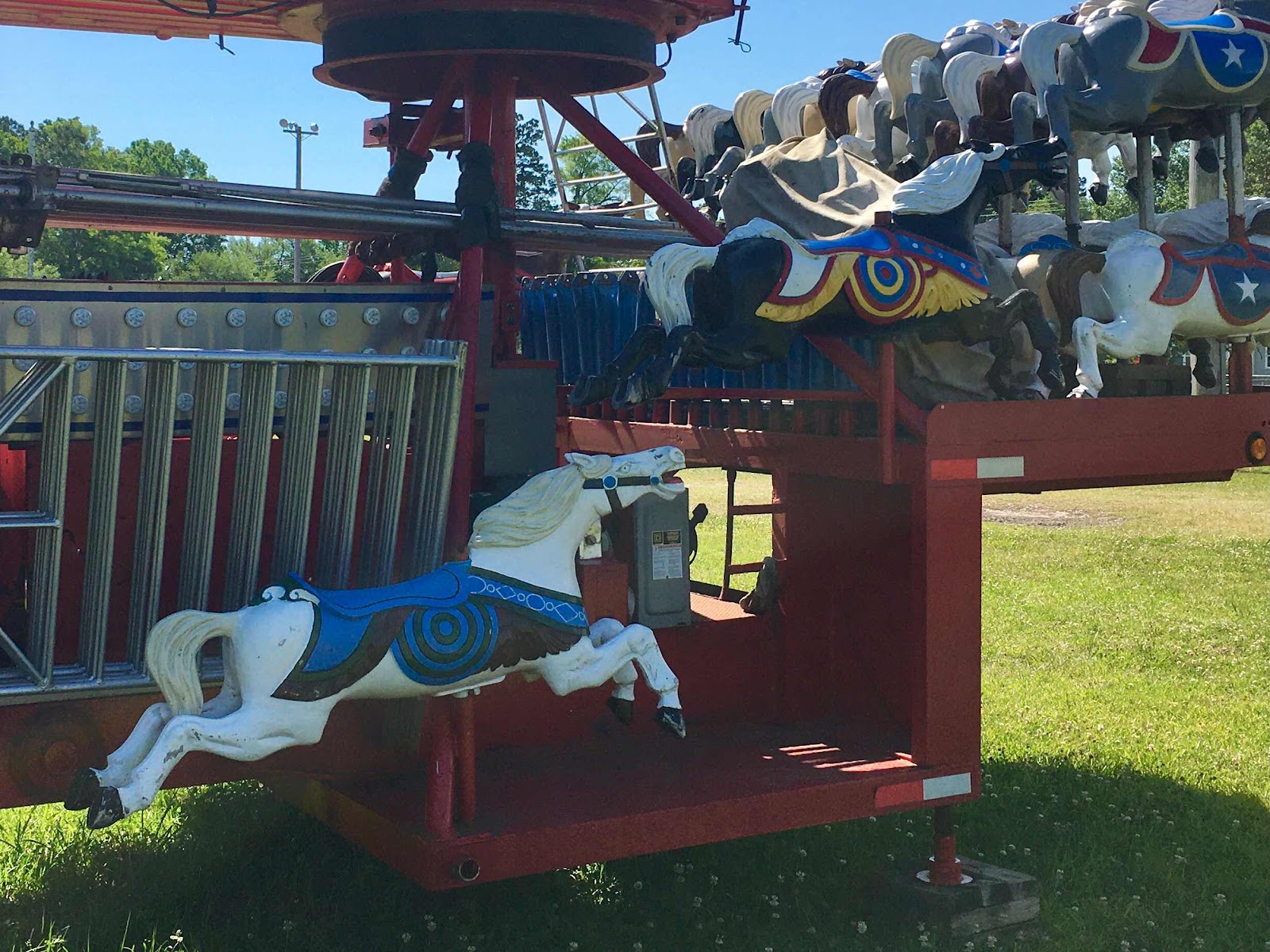 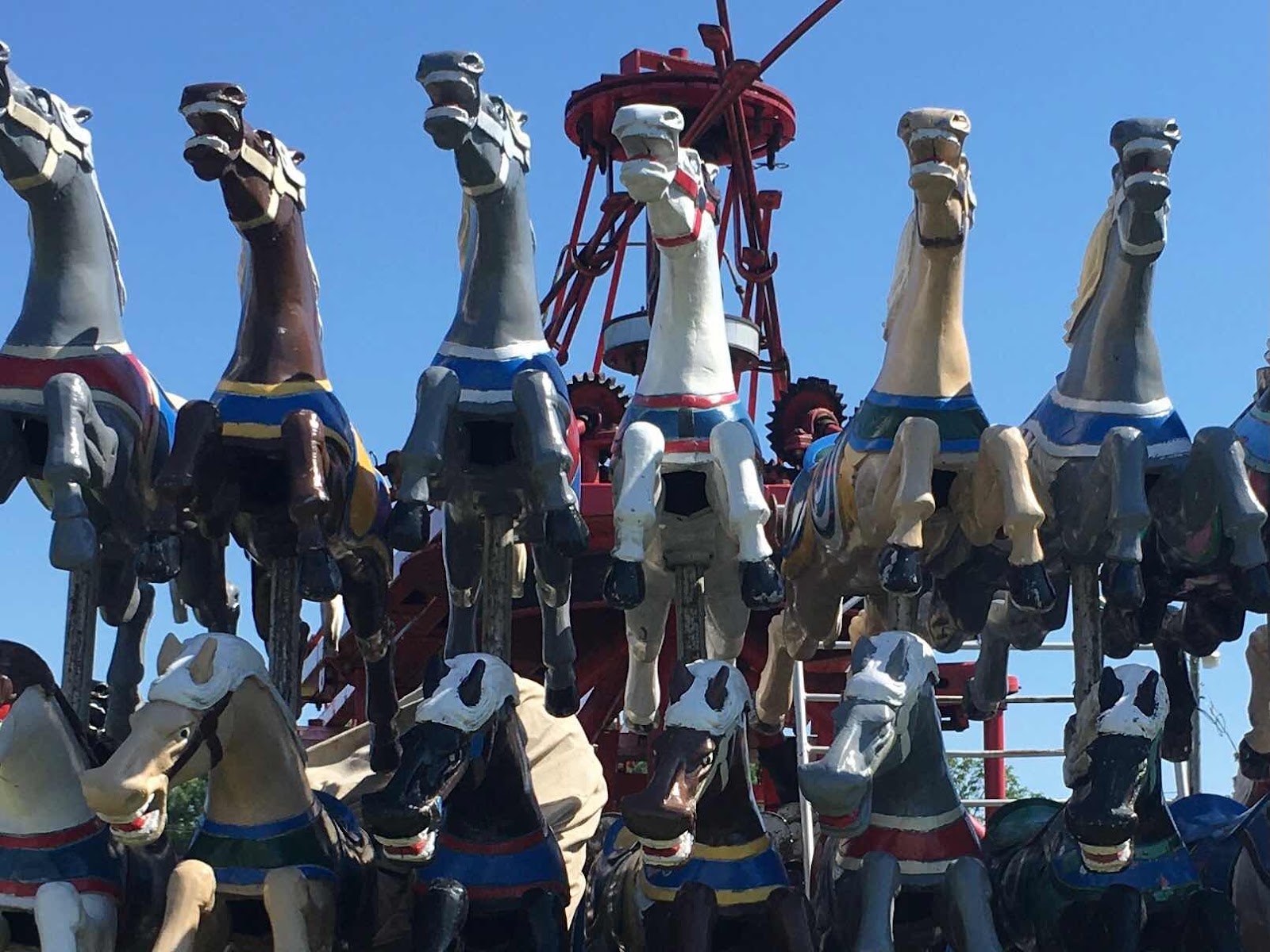 This week, however, the fun returns. “The Great Minnesota Get-Together 2021”, the Minnesota State Fair, is back.
I’m pretty sure I know where my daughters and grandchildren are this weekend. Eating Aunt Martha’s Cookies and drinking chocolate milk in the dairy barn! 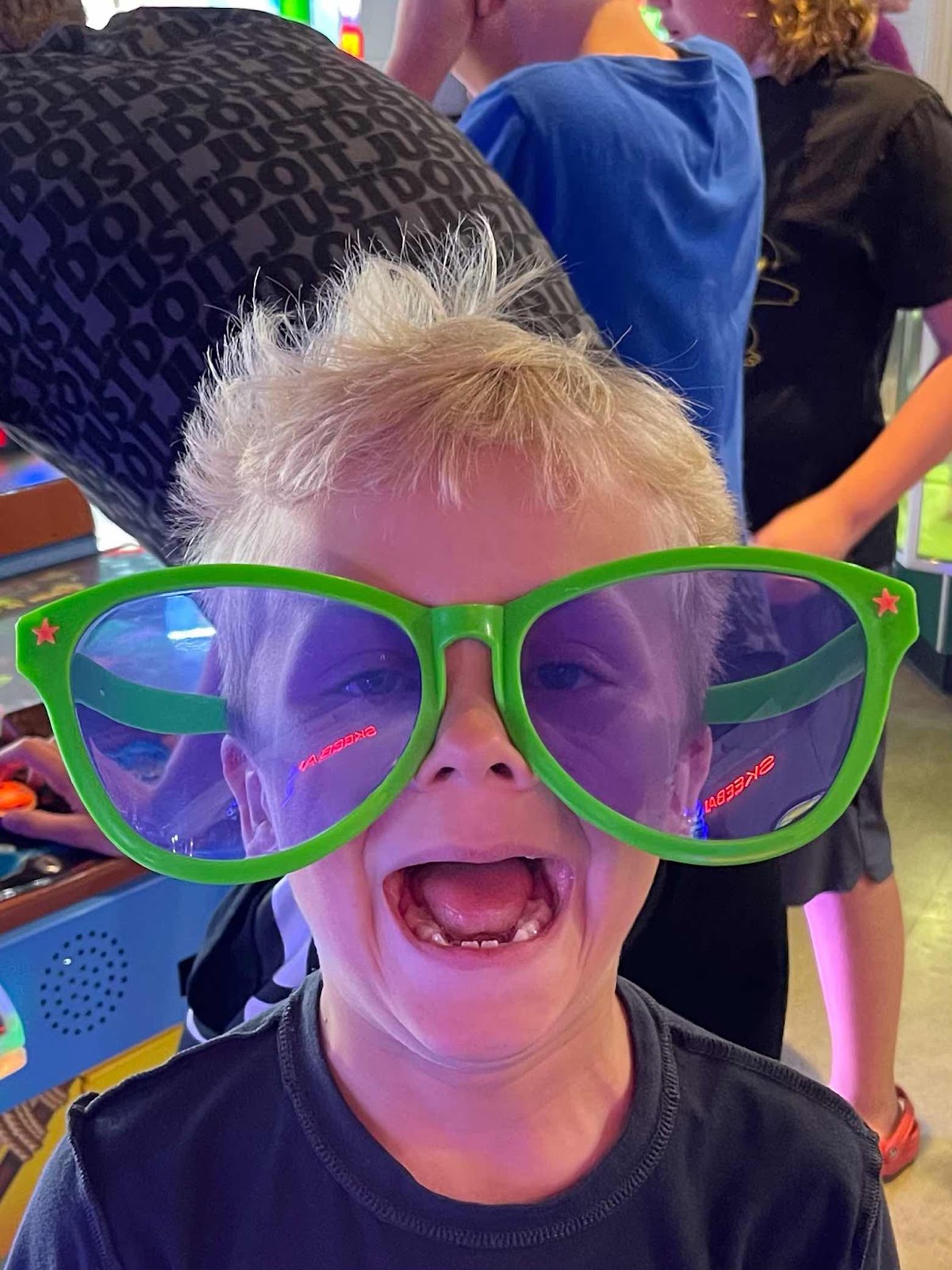 One day we were out for a drive through the Francis Marion National Forest, a wilderness of 260,000 acres near us. A silent labyrinth of narrow, crisscrossing dirt tracks lure you miles and miles, deeper and deeper in, to explore.
Only rarely a manicured lawn with a home and an outbuilding or two makes the briefest  break in the vast expanse of pine forests and swamp, tiny oases of private property amongst the federally owned lands.
We were driving along slowly, looking for rare orchids, birds, maybe a fox or a bear, when suddenly the tree line broke and revealed …
revealed …
well, this! 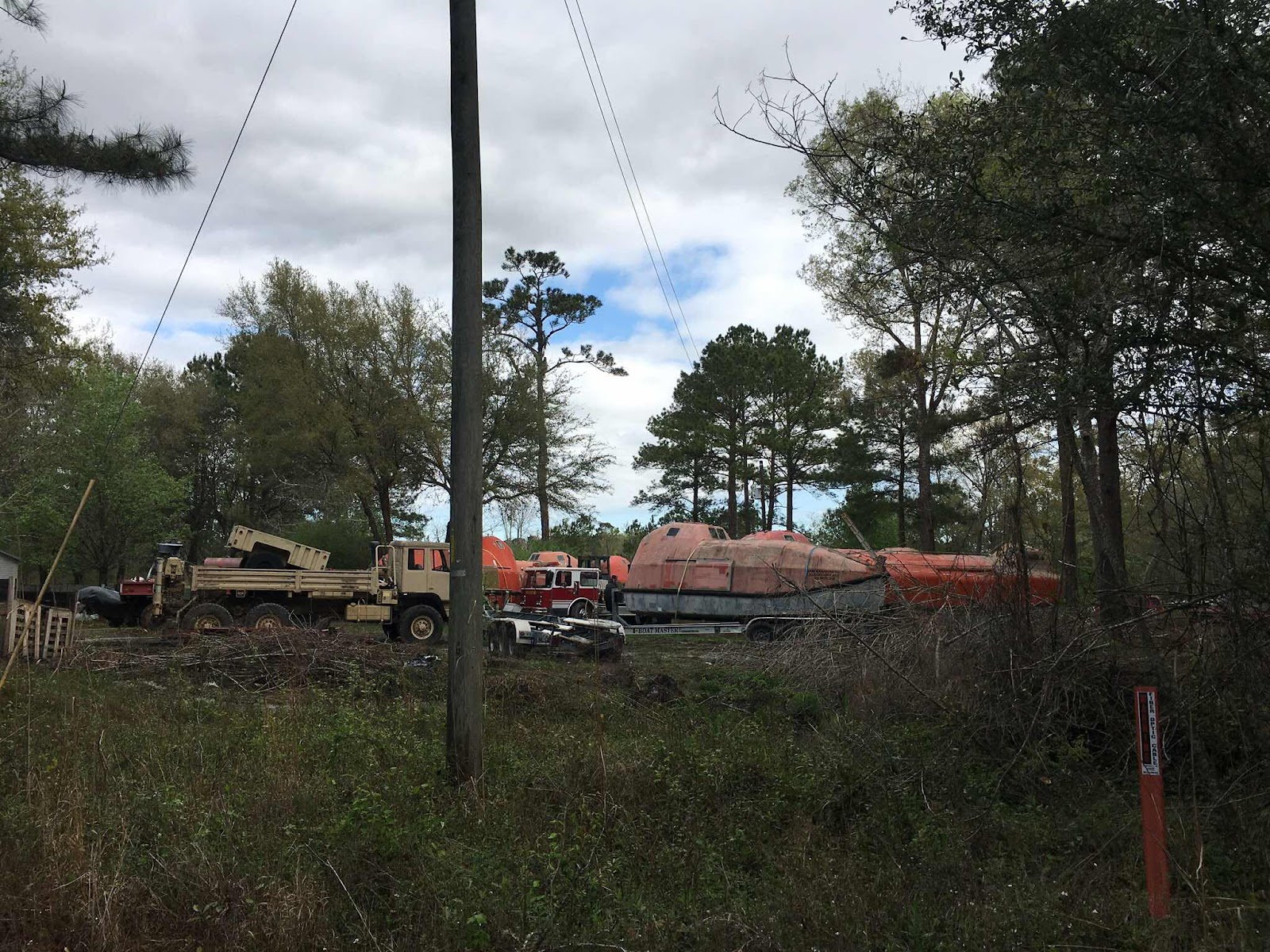 What on Earth were these things?
Closer examination revealed a collection of strange vehicles, most of which seemed to belong in the sea, all huge.
No fence, no ferocious dogs barking when I got out of the car, no one emerging to tell me to move on, so I started taking pictures. Later I tried to identify what I could, hoping to solve the mystery of what these oddities were doing in the middle of a huge National Forest. 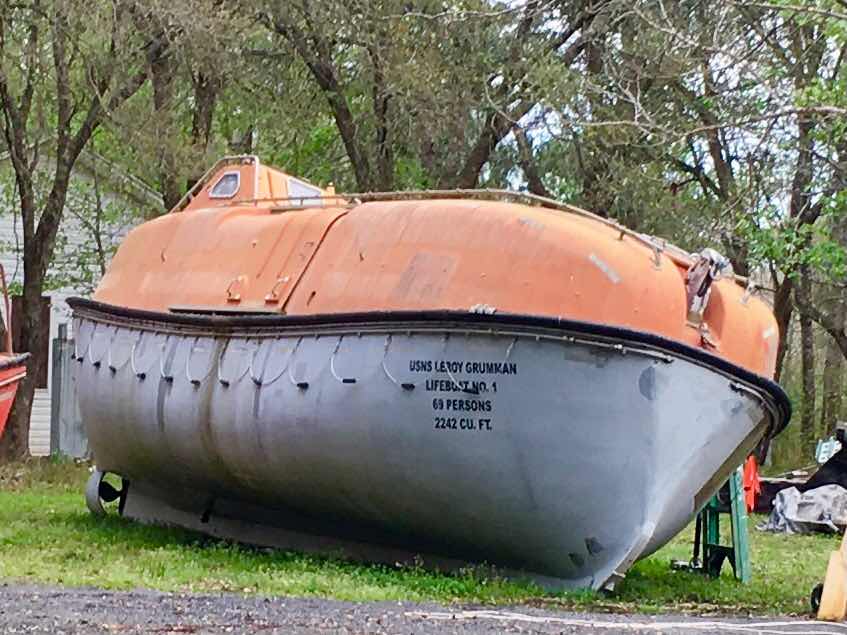 There were a bunch of these, twelve I think: life boats from the USNS Leroy Grumman. 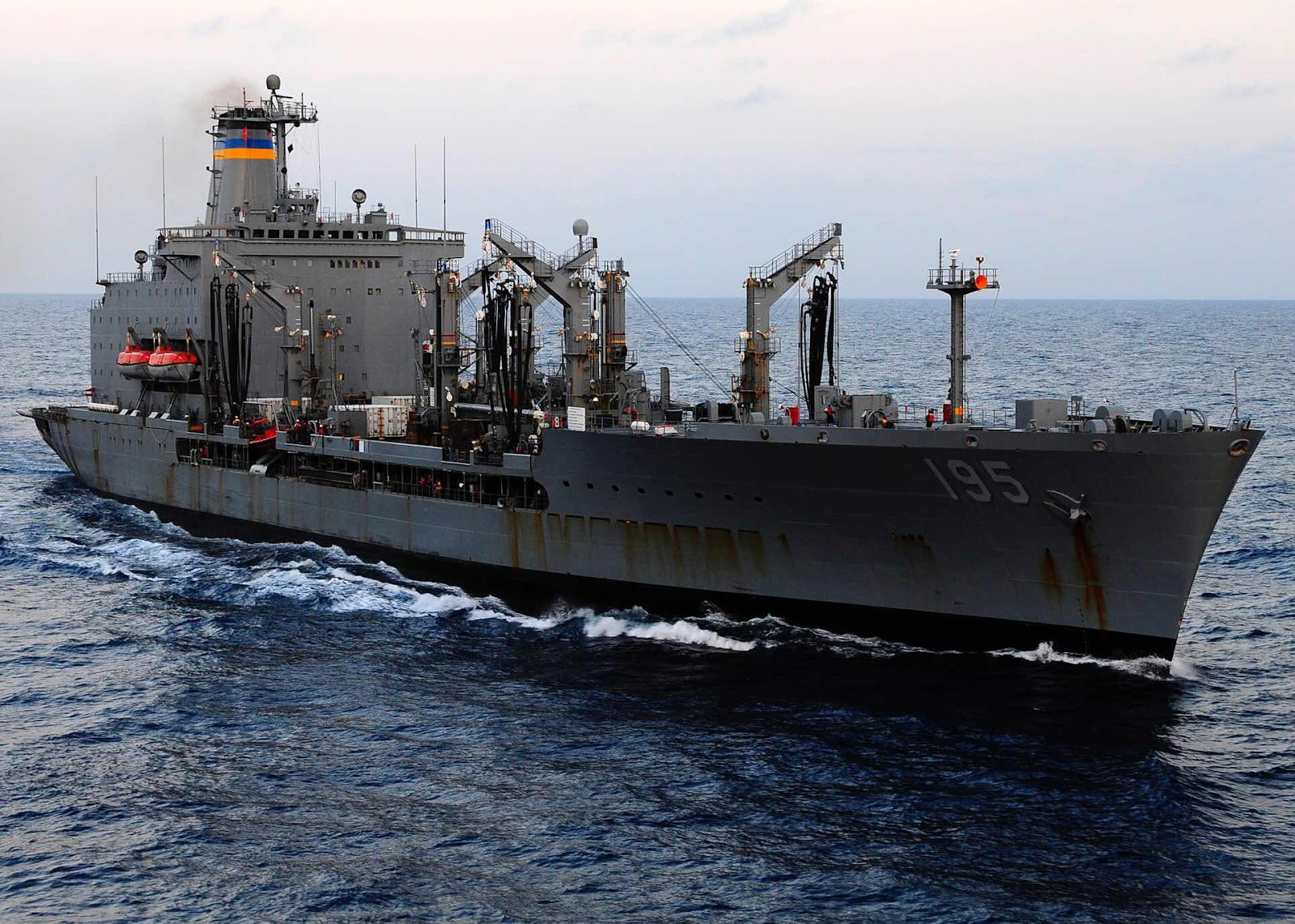 The Leroy Grumman is a replenishment oiler that refuels Navy ships in the water. They carry large amounts of fuel and dry stores in support of naval operations far from port. They are equipped with medical and dental facilities and can resupply and refuel several ships at a time.
This ship’s name may ring a bell as it was in the news in May, 2020 when one of its crew became first mariner to die from Covid on a military sealift command ship, just before the ship left port with new lifeboats on board.
Apparently, the old lifeboats landed here in the Francis Marion National Forest! 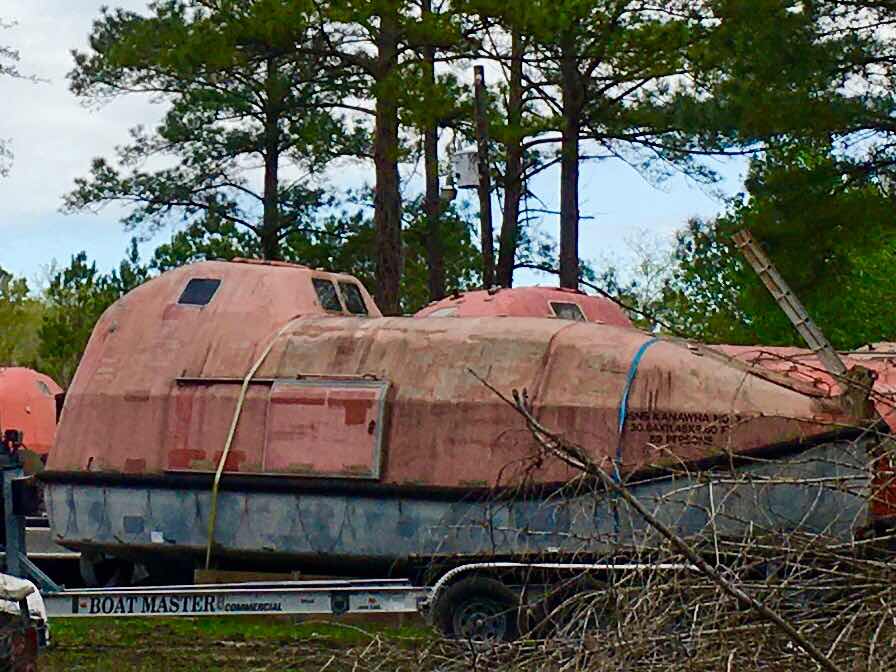 A couple of these rested beside among the Grummans  — lifeboats from another replenishment ship, the USNS Kanawha. 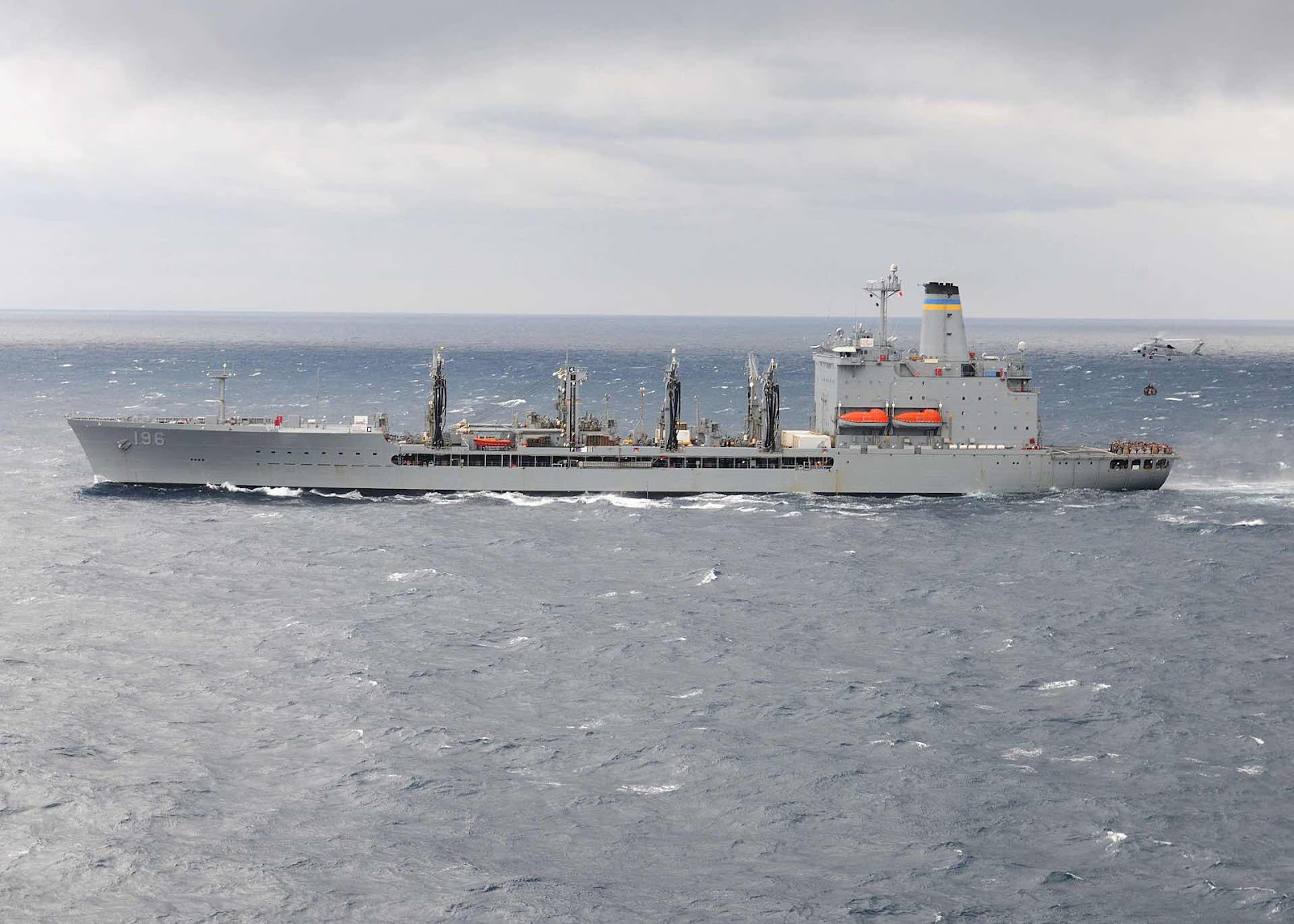 The Kanawha was launched in 1991 and is capable of pumping 900,000 gallons of diesel or 540,000 gallons of jet fuel per hour. It has helicopter decks and hangars for the resupply of ships by helicopter.
Replenishment ships are “only lightly armed”. 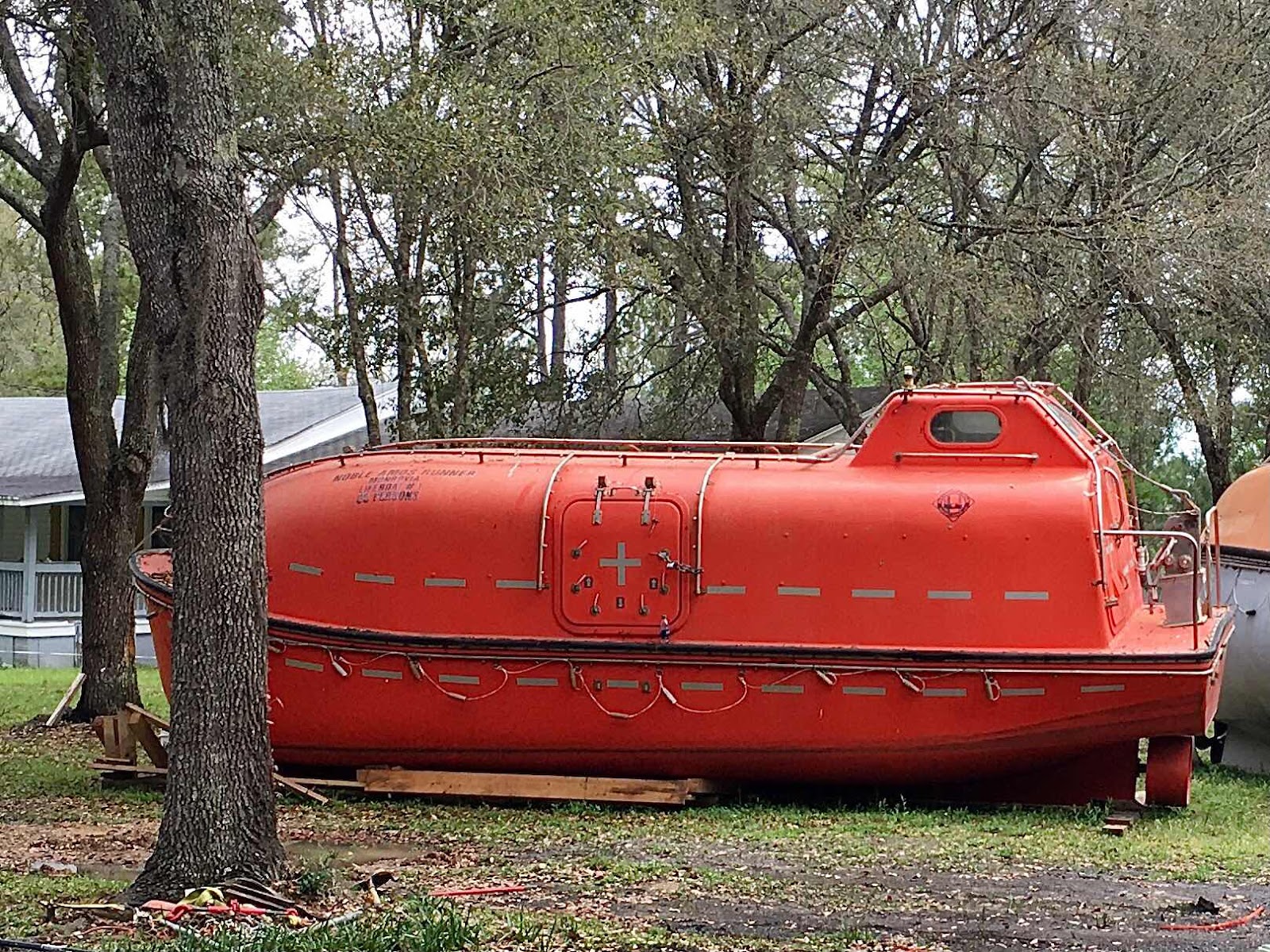 The last lifeboat is off the Noble Amos Runner oil rig, retired from Mobile, Alabama in 2018. 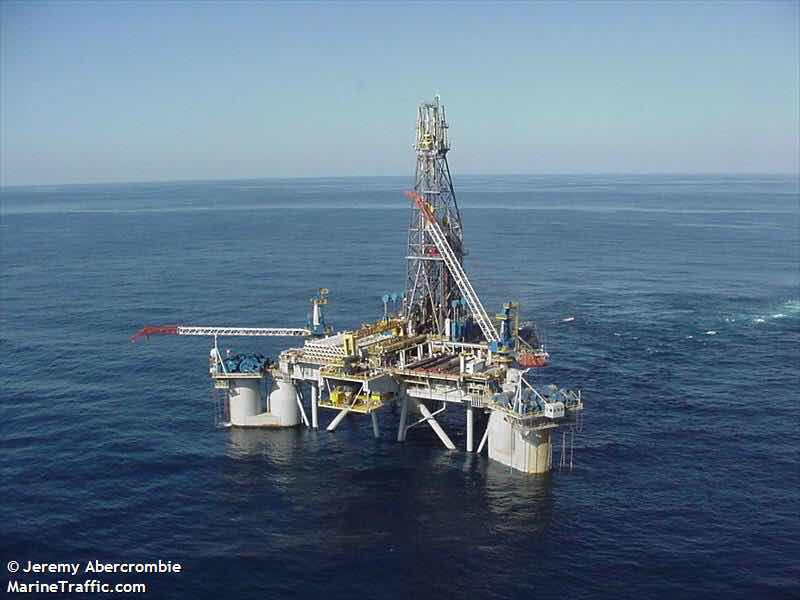 At one time the Noble Amos Runner held the record as the deepest “conventionally moored rig” at 7,650 feet under water.  From what I could find out, when it was demolished, the pieces were recycled and remilled into new steel.
So, the mystery: did someone believe there was a market for big old junked lifeboats? Maybe they, too, can be recycled? 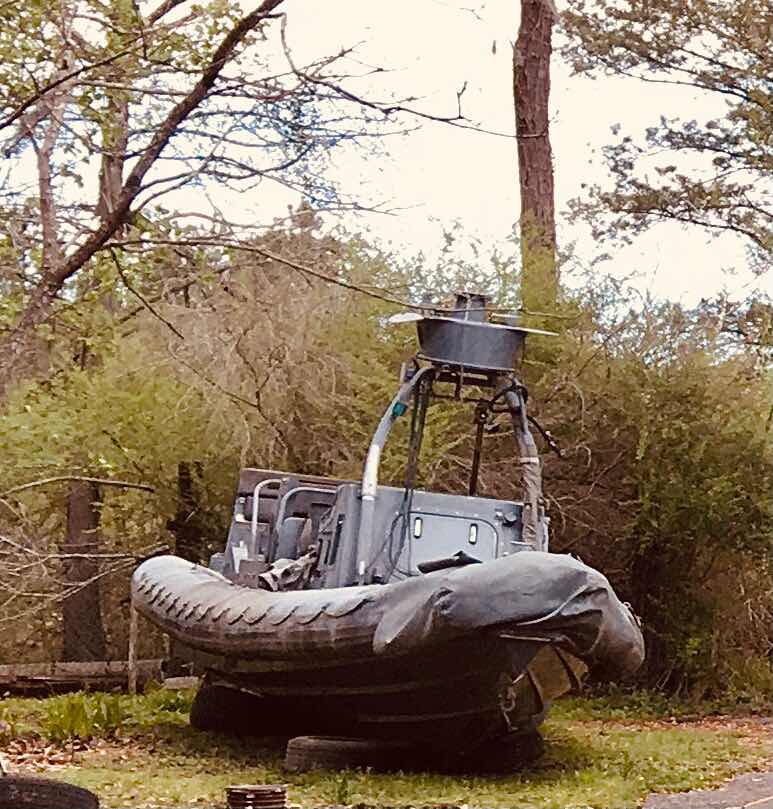 There was a variety of other odd vehicles parked in this clearing, mostly emergency vehicles of some kind. This might be a tracking device for communication between life boats in the water.
Perhaps an inventor works here deep in the woods, with plans for repurposing all these odd things, most of which belong in the sea, maybe someone with great foresight, preparing for the sea rise here along the Atlantic Coast that is already under way.
By the way, we didn’t find any orchids, few birds, no bears, not even squirrels on this morning. Still an adventure though!
Posted by Cynthia at 12:13 PM No comments:

Once at the epicenter of the colonial South Carolina rice empire, Sandy Island remains a quiet river island, untouched by modern beach developers.  The 12,000-acre sand bar (40 square miles) between the Waccamaw and Great Pee Dee Rivers is still a beloved home of the heart to descendants of enslaved workers from the rice plantations of the South Carolina coast. 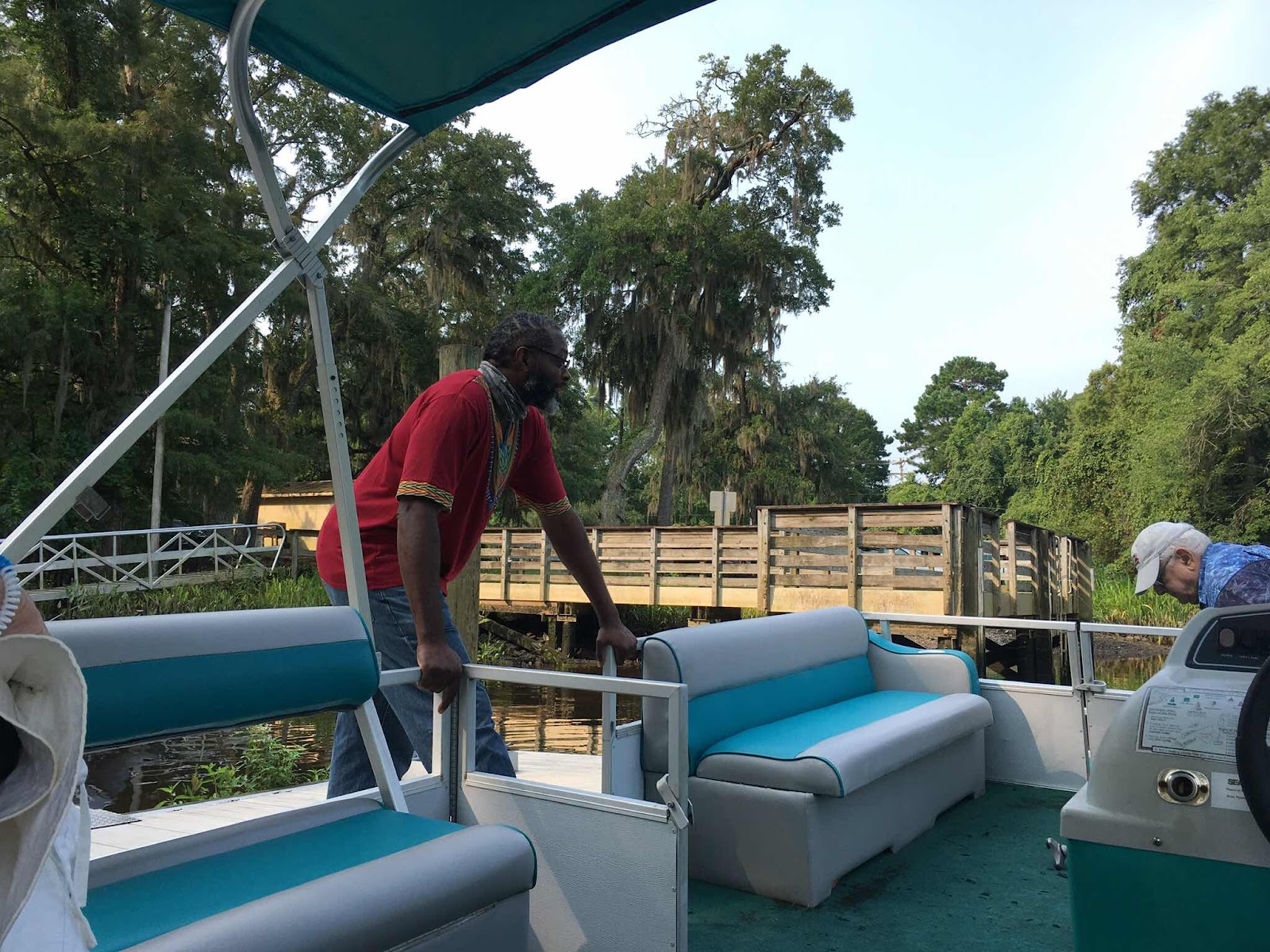 With no other access than by boat, today’s inhabitants have protected a place and a way of life for 300 years.

A native Sandy Islander, Rommy Pyatt, gave us a tour this week of the island and the Gullah community that still exists there. 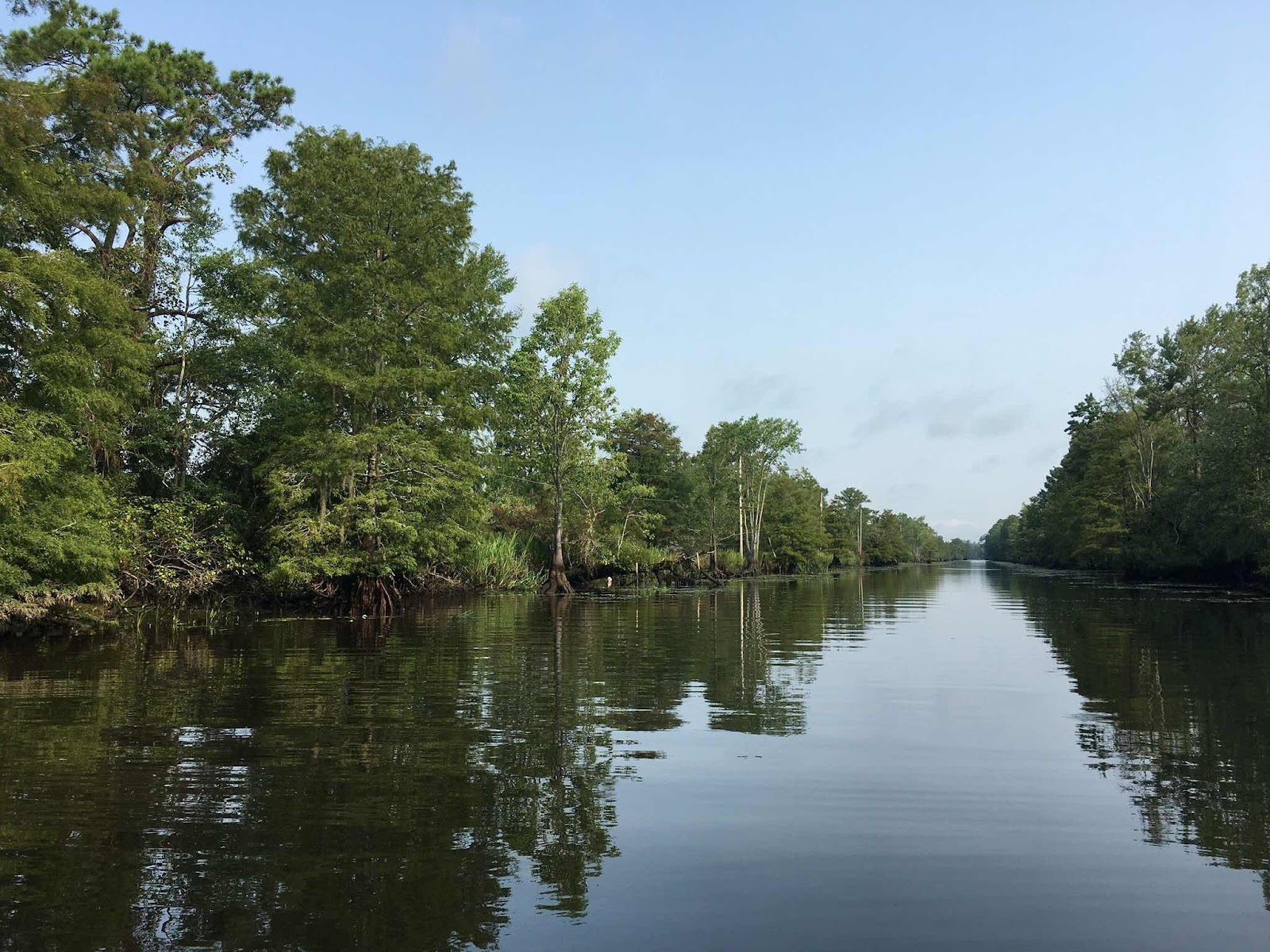 The only “road” to Sandy Island

Africans brought here involuntarily on slave ships from Sierra Leone built and worked the rice fields on the coast and rivers of South Carolina. From many different African tribes, they developed a language to communicate with each other that combined their native dialects and the English of their masters. The language, the people, and their culture became known as Gullah. 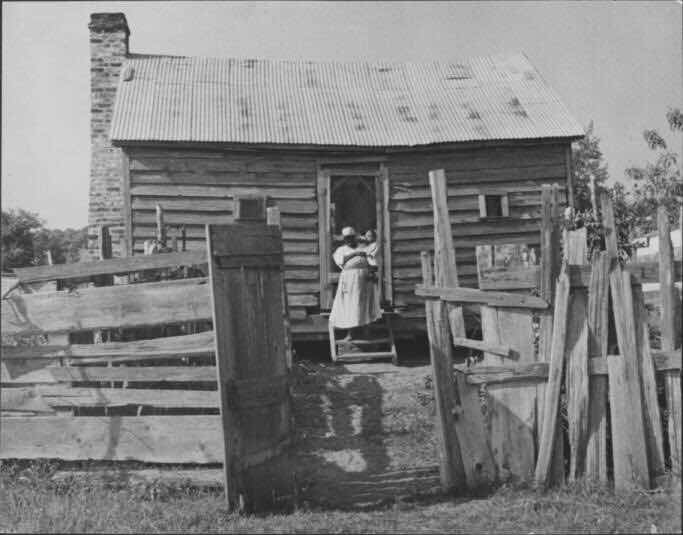 “I don’t use the term slaves,” Captain Rommy told us as we puttered through a channel from a mainland boat landing on a small pontoon boat. “It’s demeaning. I call them what they were — expert rice producers, architects and engineers who built the rice plantations. Their free labor created a lot of wealth for this area.”

“At the peak of rice production, 7-10,000 enslaved workers lived and worked along the Waccamaw River to produce a rice called Carolina Gold,” Rommy said. 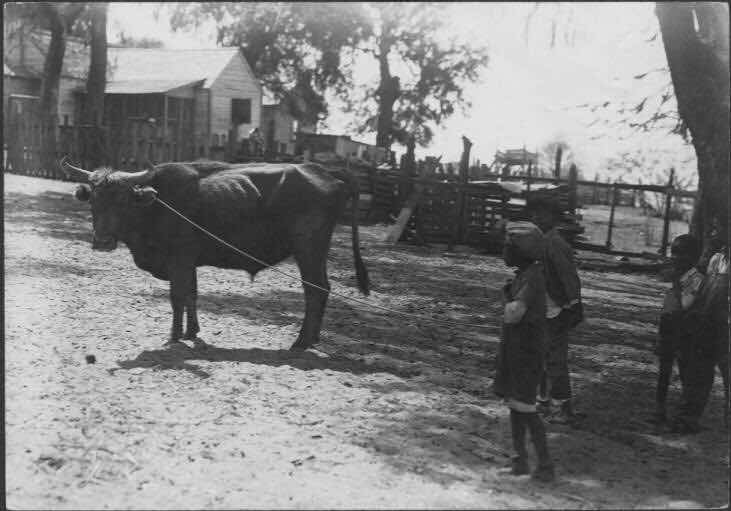 They brought with them from the rice fields in Africa expertise in building rice trunks, flooding rice fields, testing the waters coming into the fields by tasting it for salt.  They knew how to make special boots for the oxen that kept the beasts from sinking into the mud as they plowed the rice fields.

Thanks to them, South Carolina soon boasted some of the wealthiest white men in the world. 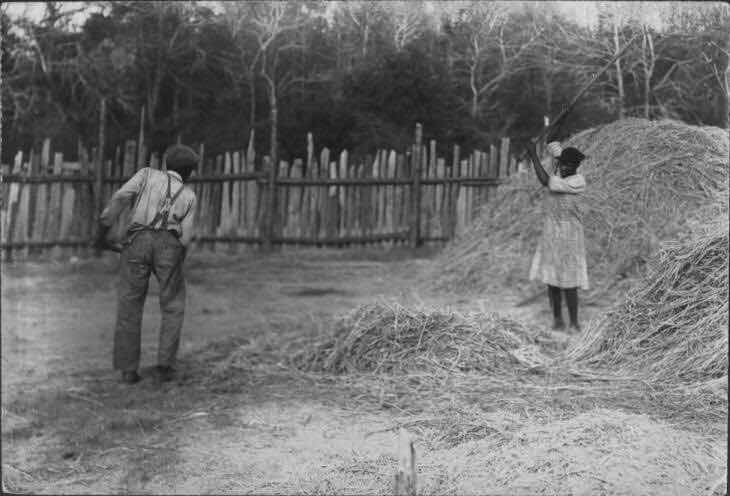 Beating the rice stalks to separate the rice grains 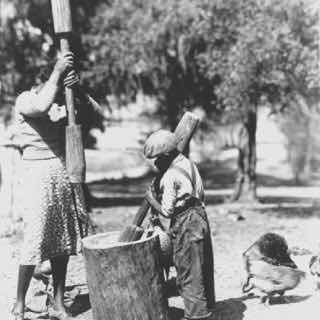 Sandy Island was chosen for its isolation to house enslaved workers and their families from several plantations growing rice along the river. From the island they went out in boats during the day to work in the rice fields. At night they returned to their Sandy Island homes. The boats were locked up to prevent their escape and it was illegal to teach any African person to swim, thus protecting the owners from loss of their large investment in valuable workers.

Right - pounding the rice to remove the husk. 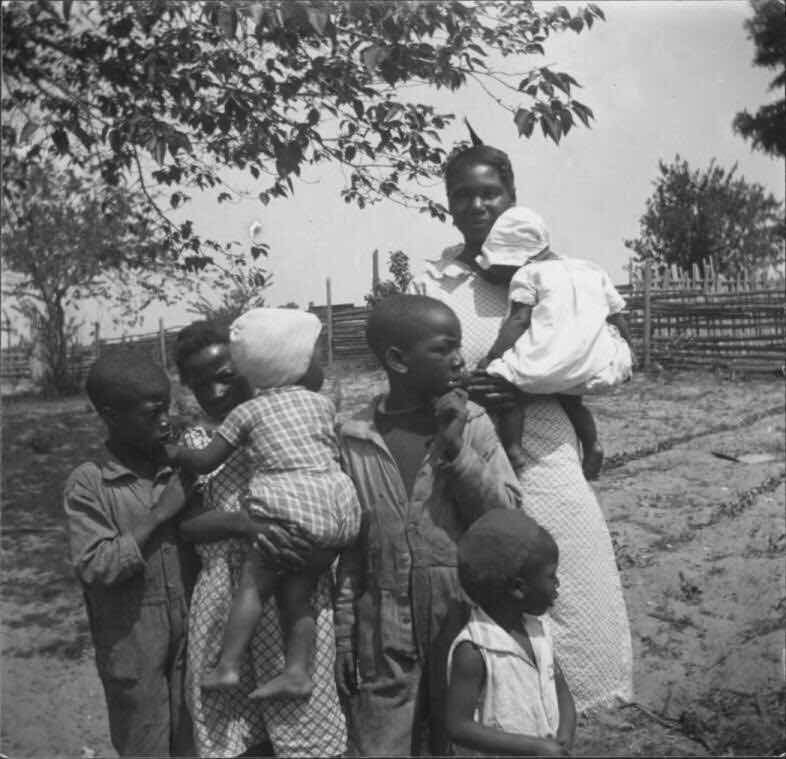 When the enslaved people were freed at the end of the War Between the States, they knew no other home than the land they had worked and lived on for, by then, several generations. Many continued to farm as sharecroppers and live on plantation lands.

In 1882 a former slave, Phillip Washington, was able to save enough money from raising rice on Sandy to purchase a piece of land. There, on the highest point in Georgetown County (at 78 feet), he built a church for the island people. Later he was able to purchase about 300 more acres and sell plots to the people who had been sharecropping there since Emancipation. Most were his relatives and they have since passed that land down through generations to their descendants still living there today. Rommy Pyatt is one of those descendants.

Most of the island is owned today by the Department of Natural Resources and protected by the Nature Conservancy. There are beautiful wild areas and trails that are open to the public but accessible only by boat. 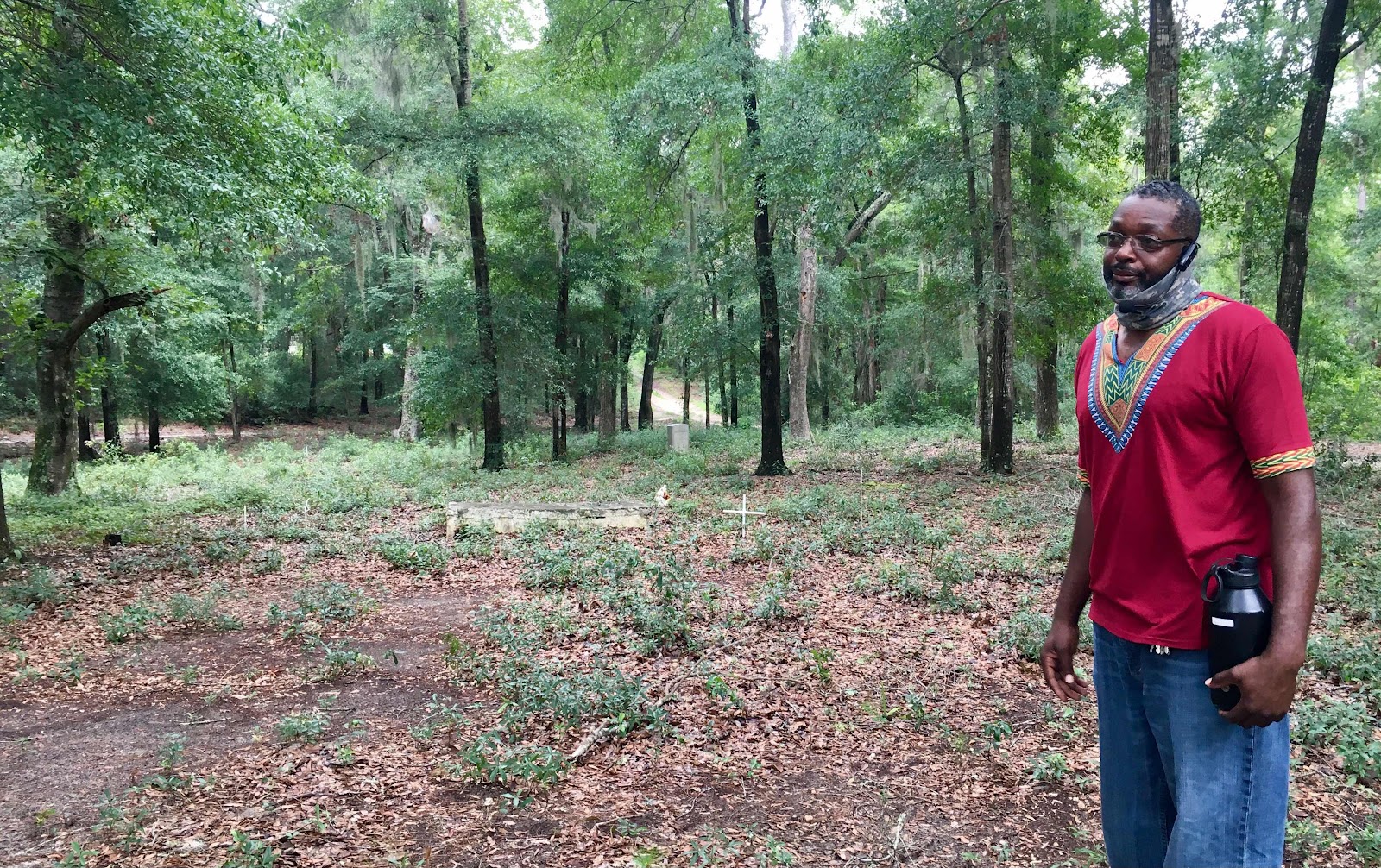 Captain Rommy brought us to one of several old graveyards on the island with burials dating back to the early 1700s.

“The tradition was to bring the deceased to a natural area like this,” he explained. There were no tombstones or markers for remembering the dead. “Any sentimental things they had were just put on the ground,” he added, and when those things had disappeared the belief was that the person’s spirit had gone up into the trees, the Spanish moss, the ferns above. “It was never meant for loved ones to come and visit the graves,” he said, because their spirits were always around in nature.

Graves in the island cemeteries have recently been mapped with sonar and a number even identified. Rommy has begun marking them with anonymous identical white crosses.

There are still no paved roads on the island and no development other than homes and a very small store. Electricity was brought across the water in 1967 and running water in 2001. While there are a few cars on the island, there are only primitive sand trails to drive them on. Most residents leave their cars at the boat landing on the mainland, crossing the water by boat and driving to work from there. 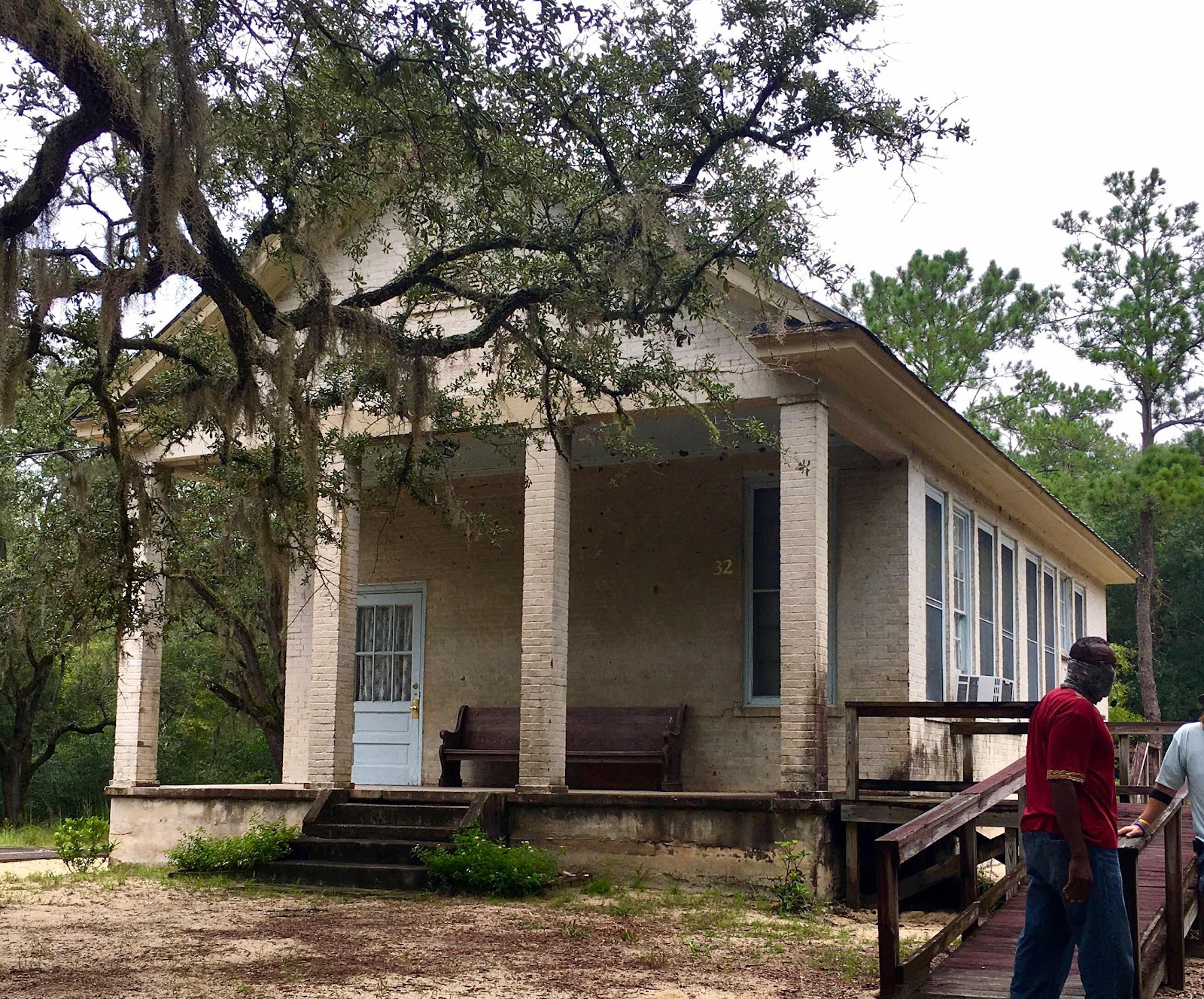 A local philanthropist, Archer Huntington, built a two-room schoolhouse for the island children in 1932. It remained in use through 1965 when a school boat was purchased to take the children across the water to the boat landing to be met by a school bus that took them to mainland schools. This continues today, and last year the old boat was replaced by a new one on the right in the photo below.

The school now serves as a library and community center where computers are made available for residents’ use. 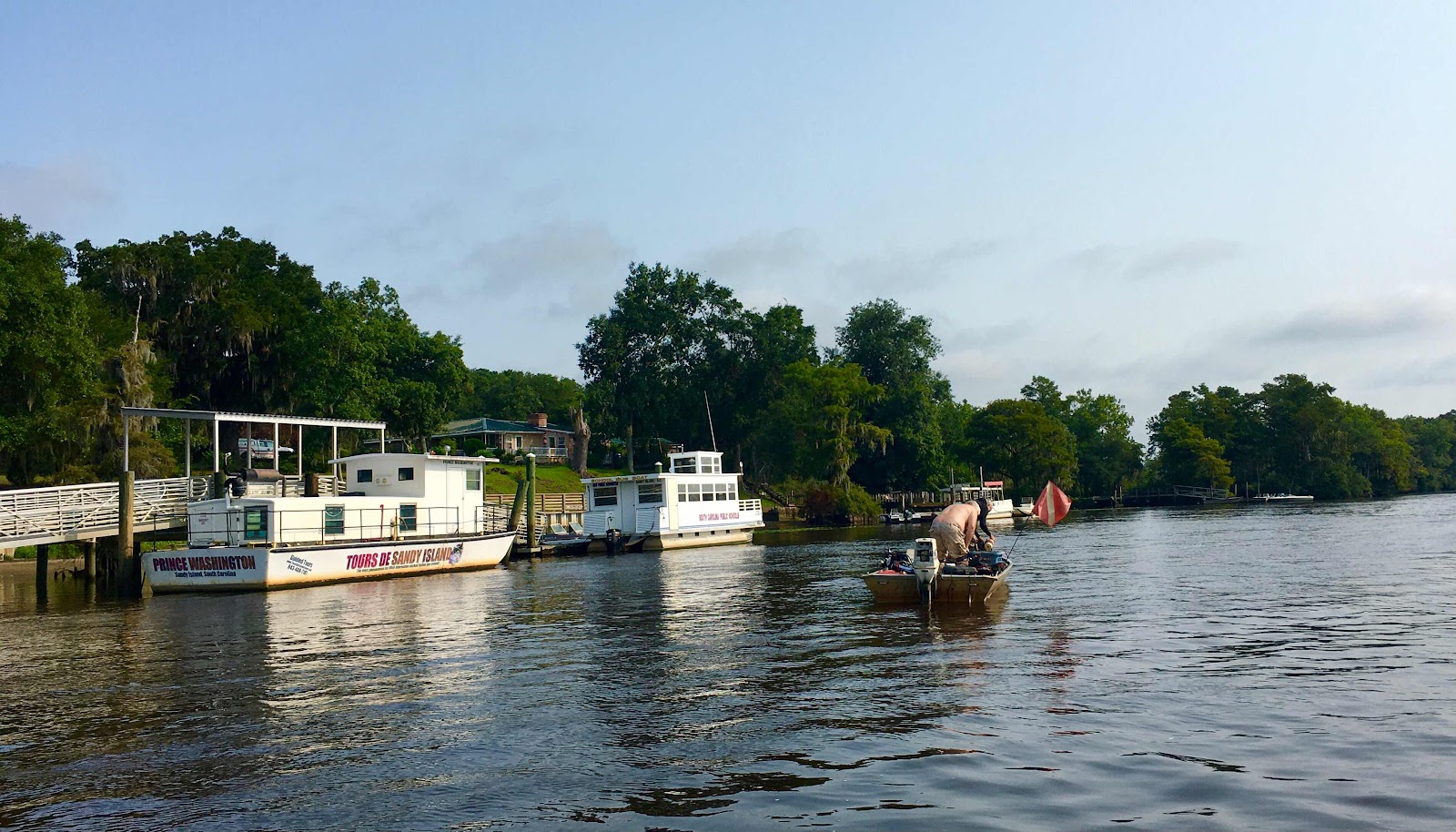 The old school boat (left) and the new one. In the foreground, a pair of amateur archaeologists search for artifacts from a boat. They found an ax head and several pottery shards which they turned over to Rommy for display in the store. On the hill behind is a brick house, built from bricks used as ballast on the boats that transported the rice crops to market.

Today only 32 families live on Sandy full time but hundreds more keep their ties to the island by coming to the Sandy Island New Bethel Church on Sundays. The most recent Homecoming Day service drew over 600 descendants!

Today, with access so limited, Sandy Island remains a singular and tangible tribute to the African Americans of South Carolina, honoring the old Gullah way of life. 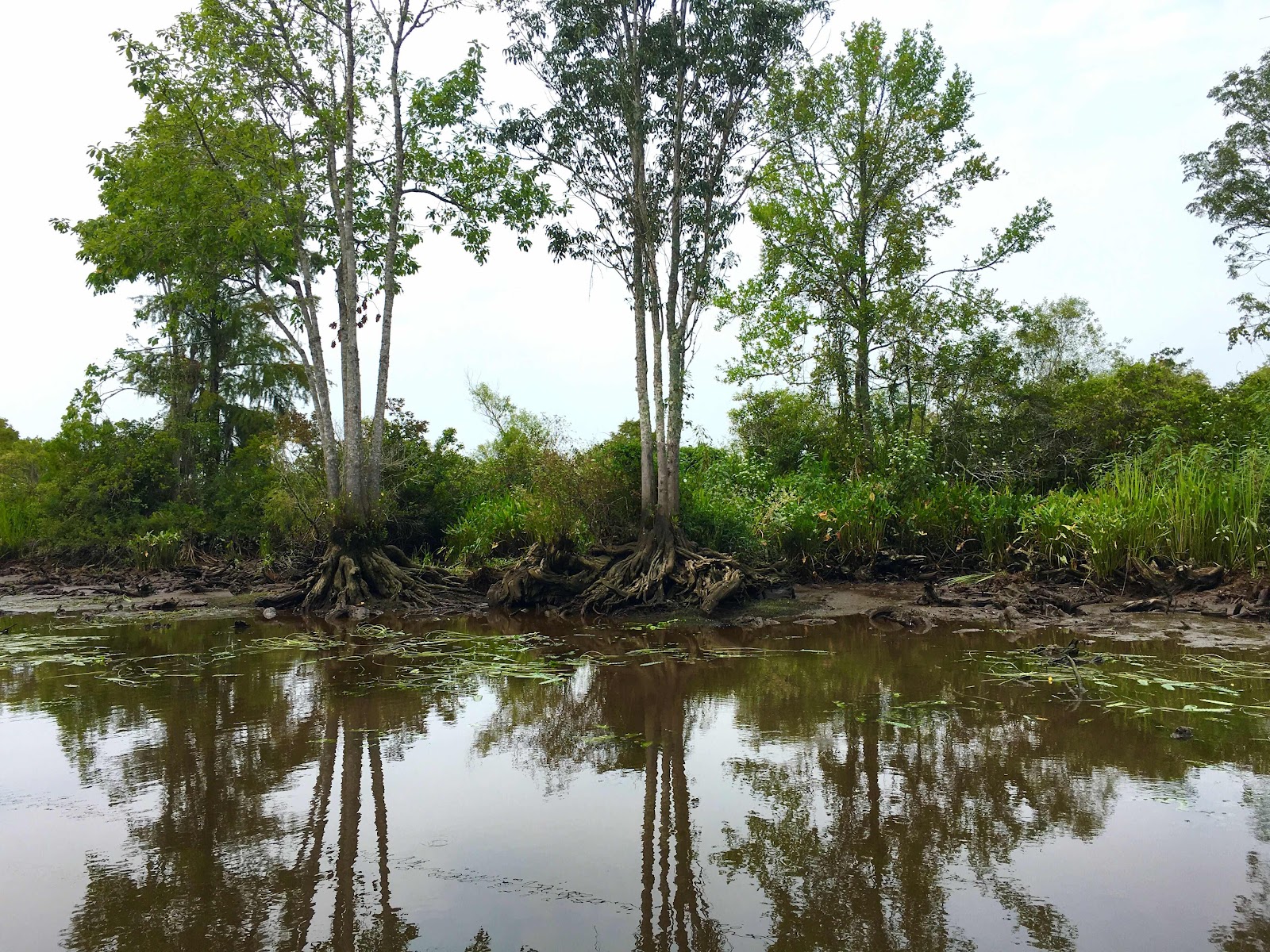 All black and white photos are the property of  Brookgreen Gardens,
taken by photographer Bayard  Wootten on Sandy Island in 1930 for Archer Huntington.
Posted by Cynthia at 5:06 AM 7 comments: