Memorial Day, the semi-official start of summer,
has come and gone and I meant to put this up yesterday and didn't. 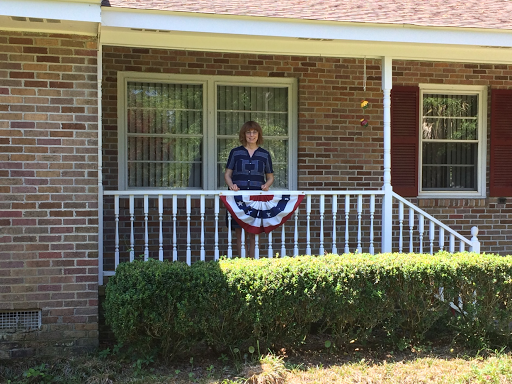 All the big old mansions in town decorate with bunting and I thought we should get in the spirit.  Of course, ours is a third the size of the big ones in town but this one seemed just the right size for our house.
In South Carolina we have two Memorial Days with Confederate Memorial Day celebrated on May 10th.  Interesting because long ago the two were combined nationally into one federal holiday.  Interesting also that state employees still, 152 years after the Civil War was decided, get Confederate Memorial Day off work. 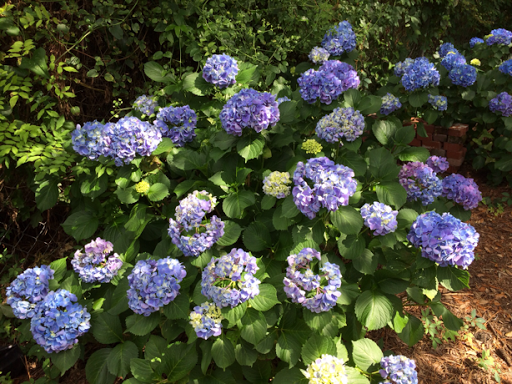 The hydrangeas are in bloom and we have four huge bushes.  The true color is the blue at the top right.  Not sure why the rest look purple because they aren't. 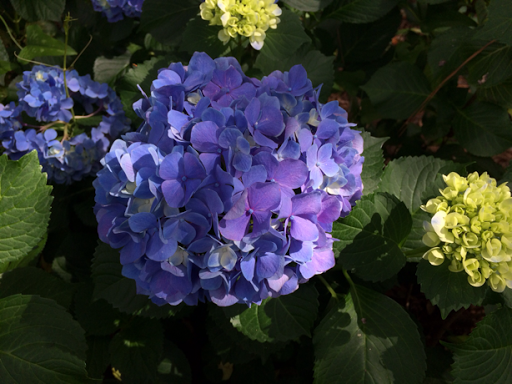 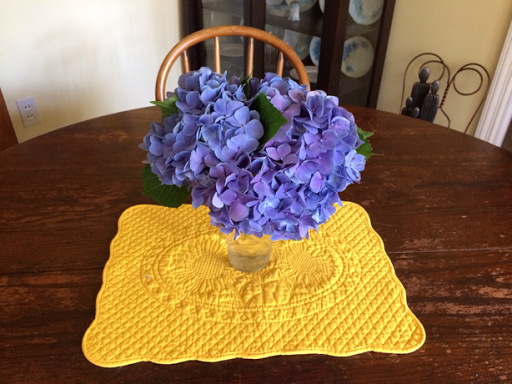 Driving by True Blue Nursery, The Writer saw this unusual hibiscus
and got it as a welcome home present for me when I returned from Minnesota. 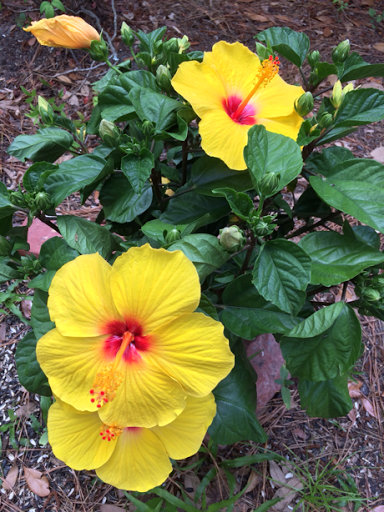 My grandma loved hibiscus
so they hold a special place
in my heart, too. 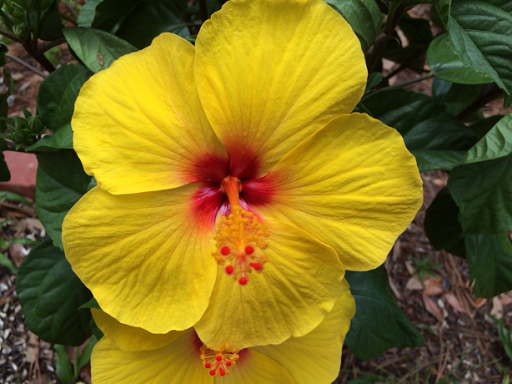 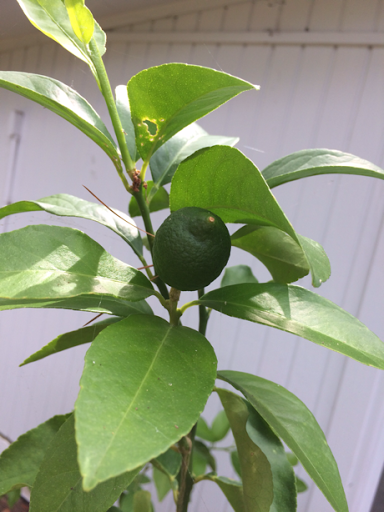 Our limes and lemons are doing well although only a disappointing number of the abundant blossoms set fruit.  It's the first time they have set fruit at all, though, so we are pretty excited. 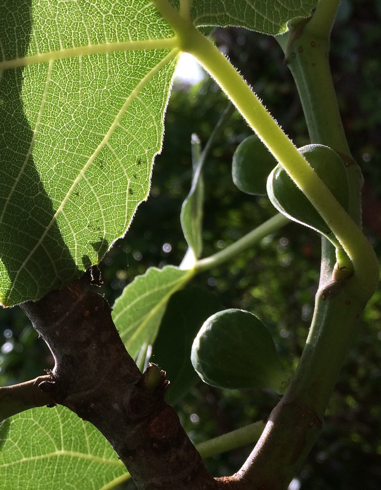 And finally, here is a peek at our figs.  Crossing our fingers the squirrels don't discover them!
They have already chewed up two of my tomatoes.
Posted by Cynthia at 7:22 AM 15 comments: 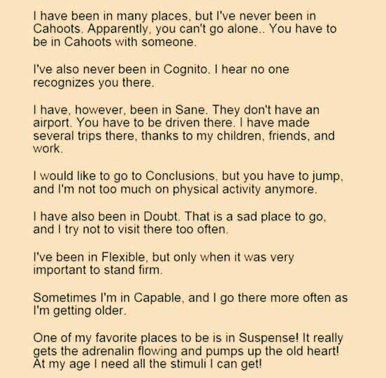 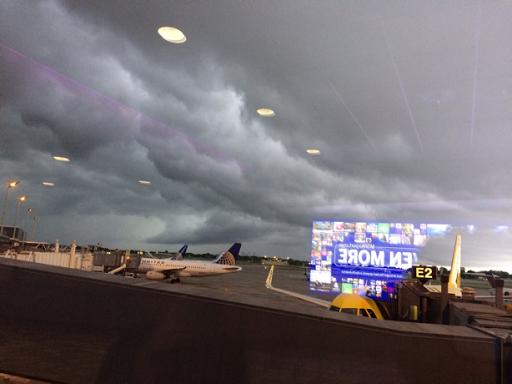 My usual good luck with flying ran out on my way north.
This is what the sky looked like in Minneapolis when I finally arrived.
I say 'finally' because ...
we left  the Carolinas headed north.
After three hours, when we were supposed to be landing in Minneapolis, we were circling, tossed around by significant turbulence, 900 miles off our route, nearly out of fuel, and headed to St Louis, MO.  We bounced into the St Louis airport to refuel, thrown from side to side by crosswinds.
We also needed a new flight crew.  Ours had been flying a long time and needed to rest.  Long story short, the crew wanted to get to Minneapolis and got permission to fly the extra hours, and after another hour of sitting on the plane we took off again.  There were still tornado warnings out for Minneapolis but we were able to fly in from the west 20 minutes before the storms hit again from the east.
I could have flown to London in the time it took to get from SC to MN!
✈️ ✈️ ✈️
But here I am, staying with my daughter, son-in-law, and four grandboys and tonight my sister arrives for the weekend.  And the temperature, 90 when I left SC, has been in the low 40s.
Brrrr! 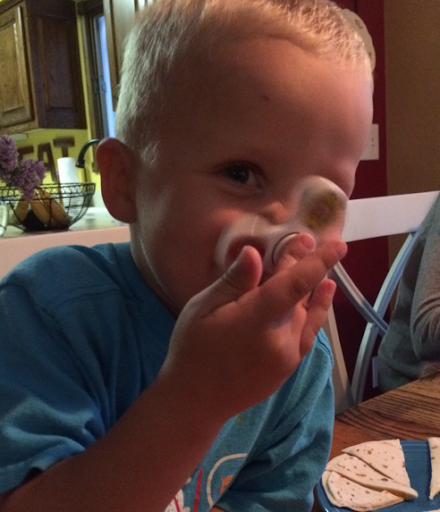 The older boys are in school but this guy and I had the day together yesterday.
Here he is showing me 'tricks' with his fidget spinner.
You don't know what a fidget spinner is?  Just the latest craze with elementary and middle schoolers! 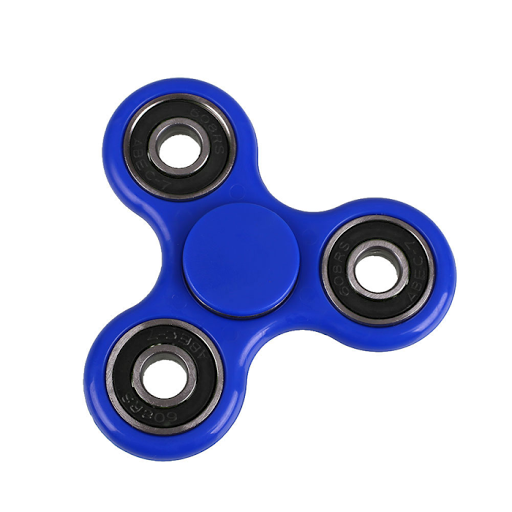 Called "the original stress reliever," I should have had one on the flight north! (I can't spin it on my nose yet, but I have mastered balancing it on my thumb.) 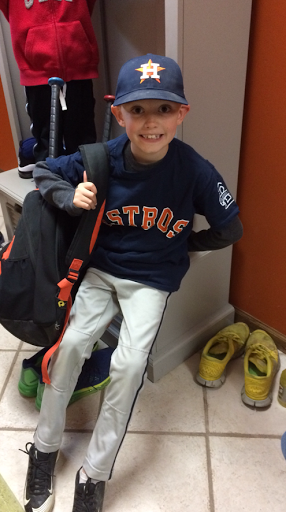 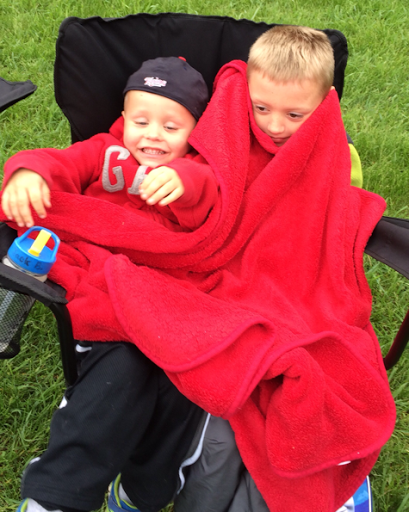 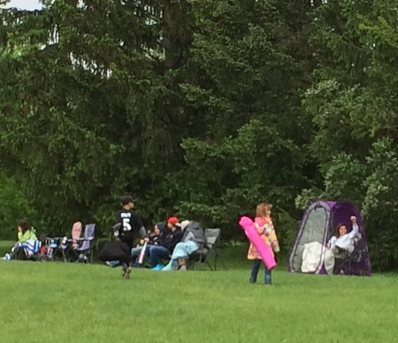 Notice the clever spectator on the far right, prepared with a shelter from wind and cold with a clear plastic viewing area, also known for its use by ice fishermen!
🏏🏏🏏🏏🏏
I have to go now.
The second graders are giving a poetry reading this afternoon, my guys have all written poems, and I'm going to hear them!
Posted by Cynthia at 10:47 AM 17 comments:

I had never seen a Confederate Rose until we moved to Georgetown,
and I think it is one of the prettiest flowers I've ever seen. 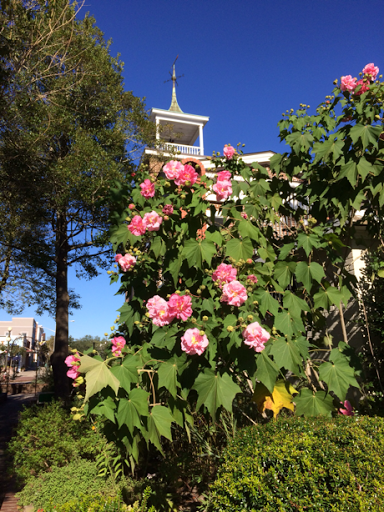 The Confederate Rose, or hibiscus mutablis, is a Chinese import, brought from England in  the 1600s.
It became important in the hearts and gardens of Southerners during the hard days of the Civil War
because it was so easy to propagate.
Stick a cutting in the ground and you had
a plant to share with a neighbor.
Also called the Cotton Rose, the bush produces white flowers.  Over the course of the two days a blossom lives,
it gradually turns from white to pink, and pink to nearly red, and then falls off the bush. A member of the hibiscus family, its changing color is reflected in the second part of its scientific name, mutablis.
At the time of the Civil War a legend developed around the way the flower changes color.  It goes like this.
A soldier, fatally wounded in battle, fell upon the roots of a rose as he lay dying. 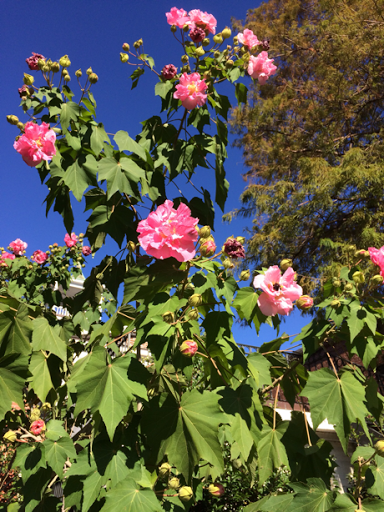 As the young man's blood flowed from his wound, more and more was absorbed by the blooming bush, causing the  flowers to gradually change
from white to pink to red.
When he died, the flowers did, too, falling to the ground around the soldier.
After the 'War of Northern Aggression' was over, the bush was planted widely on soldiers' graves in Southern cemeteries.
In this bush you can see the light and dark pink flowers that will fall off by morning and be replaced by opening white buds.  Each blossom is about six inches across. 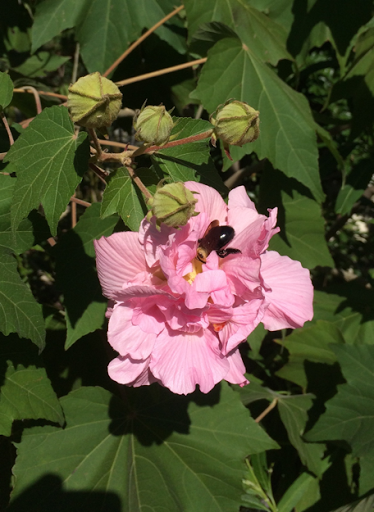 Neither a rose nor a native, the beautiful Confederate Rose
is an immigrant,
just like many of us who now call the South 'home'.
Posted by Cynthia at 12:46 PM 17 comments:

South and slightly west of Georgetown lie remains of an engineering feat important to commerce in the new United States of America, the Santee Canal, linking inland plantations with their crops of indigo and cotton to the markets in Charleston for export to Europe. 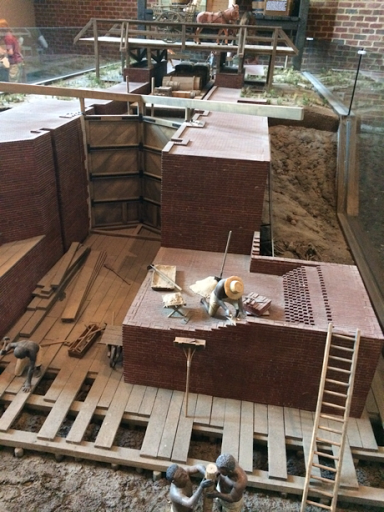 Work began on the canal in 1793 with 1000 slave laborers loaned out from nearby plantations.  Built mostly of brick and stone, solely with picks and shovels and human power, the canal was completed seven years later.  It featured 10 locks and a tide gate, was 22 miles long, connected the Santee and Cooper Rivers, and was considered one of the first great engineering feats in the new country.
It cost $800,000 and was funded solely by its users. 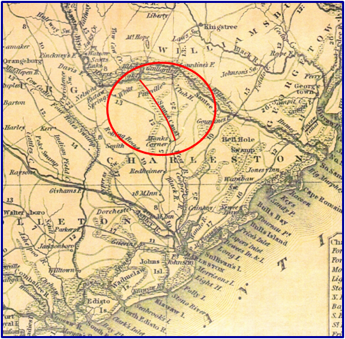 Initially power for the narrow boats and barges was supplied through horses and mules on towpaths beside the water and later by slave polemen.  Lock tenders and their families who lived by each lock were also black. 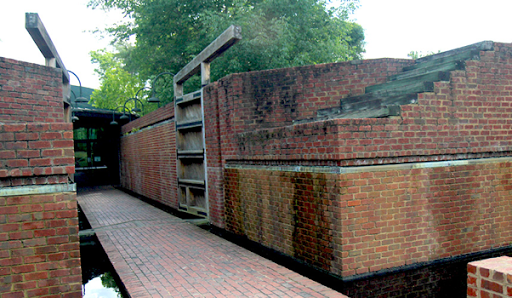 This reconstruction of one of the locks is the entrance to a small museum at the Old Santee Canal Park in Monck's Corners.
For the first 16 years of its existence the canal was a success.  In 1830, 720 boats carried 70,000 bales of cotton to Charleston.  But after two years of severe drought that closed the canal completely, crumbling construction, and finally, the completion of a railroad, the canal was closed in 1853. 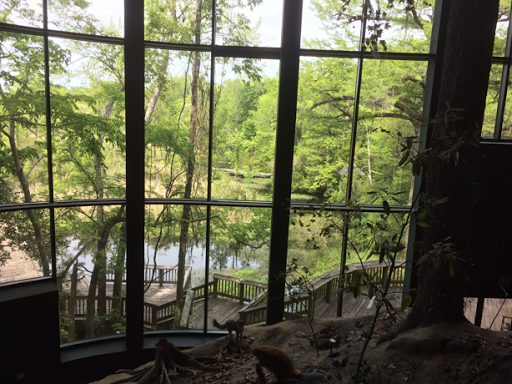 From the observation windows of the museum, it's easy to imagine a barge out there, low in the water and piled high with cotton bales, making its silent way along the canal.  The park is built at what was the southernmost portion of the Santee Canal. 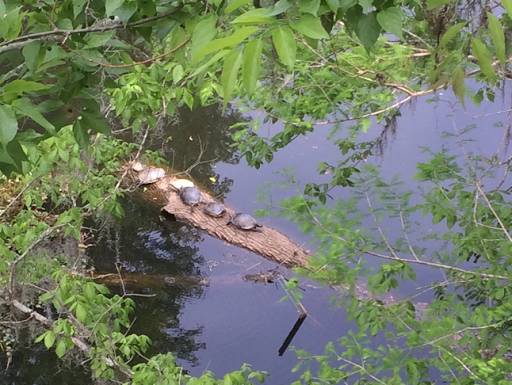 Turtles lined up on a log were enjoying
the sun the day we visited. 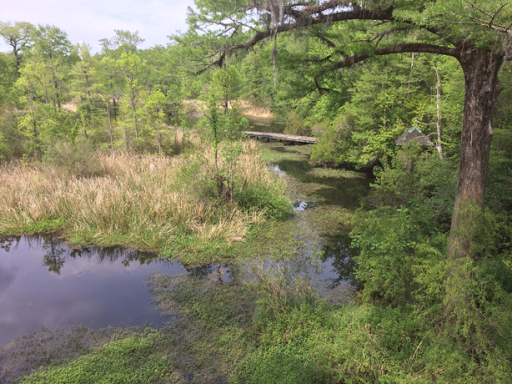 The Old Santee Canal today
There are four miles of boardwalks and walking trails on its banks.
Posted by Cynthia at 12:30 PM 13 comments: