The flood probably crested sometime yesterday, at levels greatly reduced from predictions.  Of course, we are grateful.  There is no flooding in our neighborhood at all and even downtown, where predictions ranged from five to fifteen feet of water, it's merely a wash over the road.  (That's not to say there aren't people dealing with several feet of water because in some areas close to the rivers they are.)

Thursday night we meandered through downtown.  All the businesses along the harbor had been emptied of merchandise, boarded up, wrapped in plastic, sandbagged. 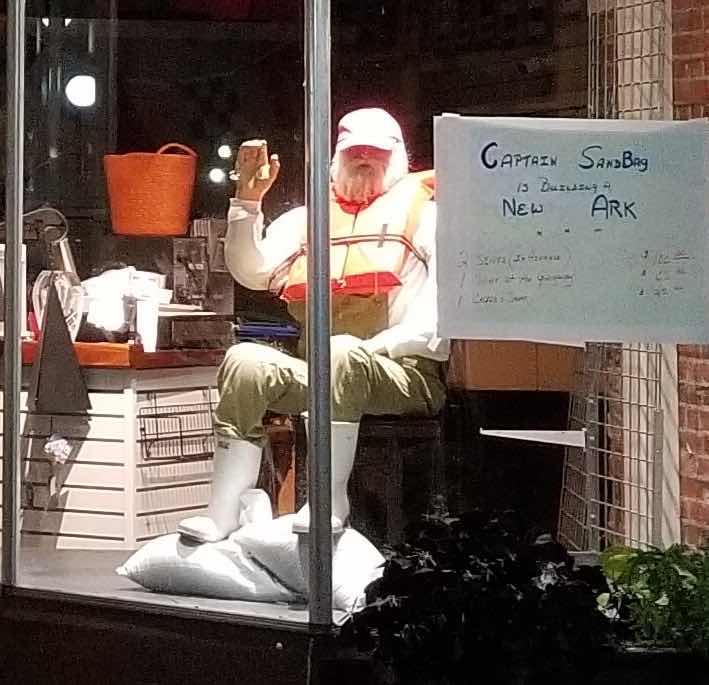 Only Captain Sandbag was left to watch over the Maritime Museum, greet gawkers, and offer rides out of town.
Next door, on the Harborwalk that runs along the waterfront, a lone saxophonist played jazz in the darkness.  It was so eerie and sad.
The floating bridge has been dismantled and we saw the convoy of Guard trucks from the bridge-building unit heading south last night, home we assume.  This afternoon the shelters in schools will be closed and soon the aqua-dams along the bridges will be removed and closed driving lanes opened.  When that happens we will be heading to the beach to give thanks for the backside view of all things Florence!
Posted by Cynthia at 5:42 AM 14 comments: 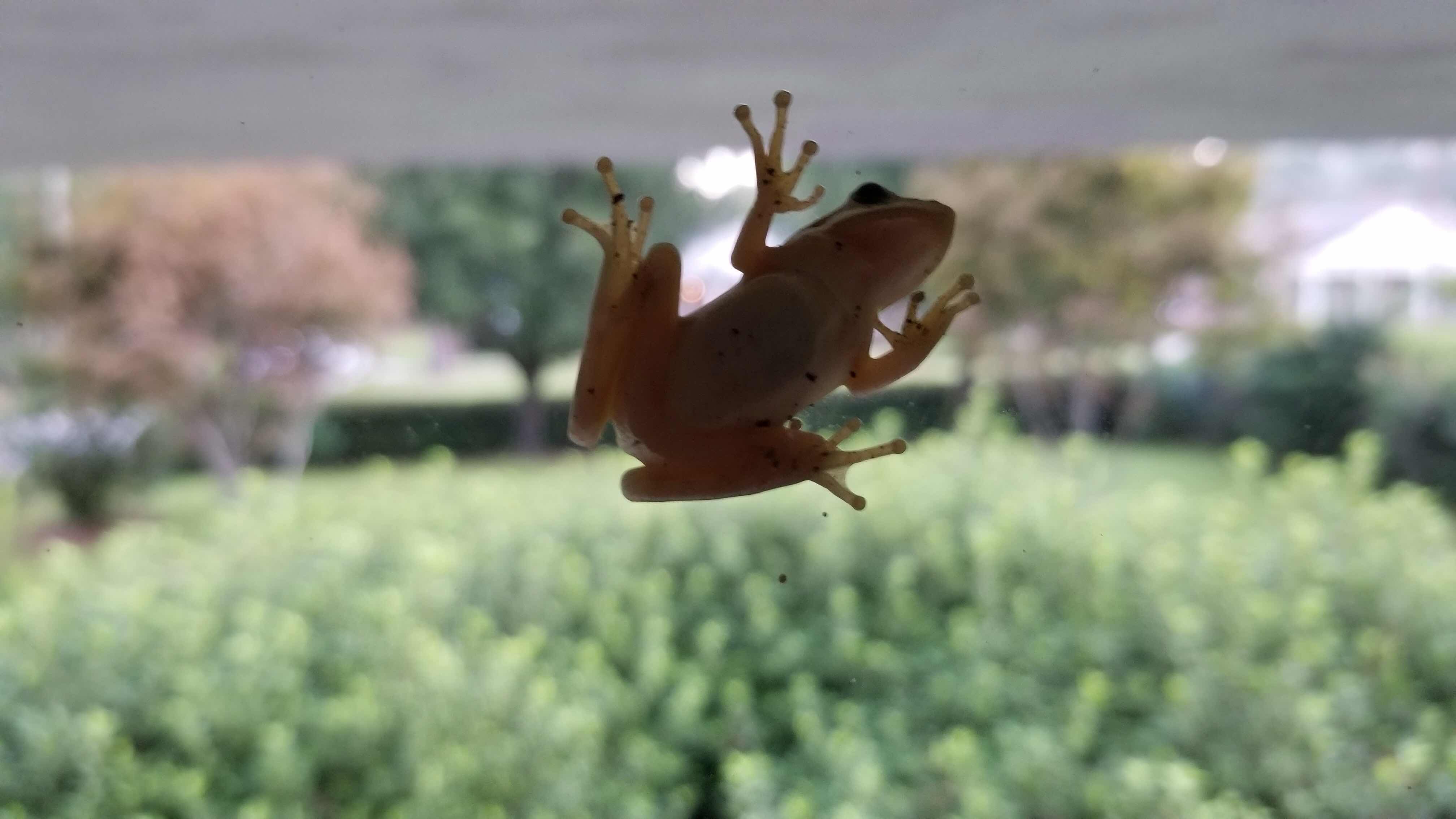 We don't need AccuWeather to tell us the Flo-Flood will be upon us tonight and tomorrow.  Our Weather Frog was 10 feet up on the window this morning, begging to come in. 😱
We are fortunate as our house is at 12 feet above sea level and the Sampit River and Winyah Bay (where we are) are not expected to flood as much as the PeeDee, Black, and Waccamaw.
This weekend we watched people and vehicles pour into town and begin work on various projects.  Not only the big equipment and wonderful young people of the National Guard, but emergency personnel lent from all over the East, and private folks like those bringing in their own flat boats and air boats, pickup trucks loaded with bottled water, $4000 worth of food from the people of New Orleans, animal rescue groups, and on and on. They come at their own expense just because they know the misery of flooding.
Like Mr. Rogers said, in an emergency, look for the helpers.
Since Sunday the Guard has been working to construct a huge floating bridge to take supplies and emergency vehicles across the river when the three big bridges become impassable. Georgetown Hospital has been been evacuated and now the next closest hospital is across two bridges and up the main highway, which will flood. 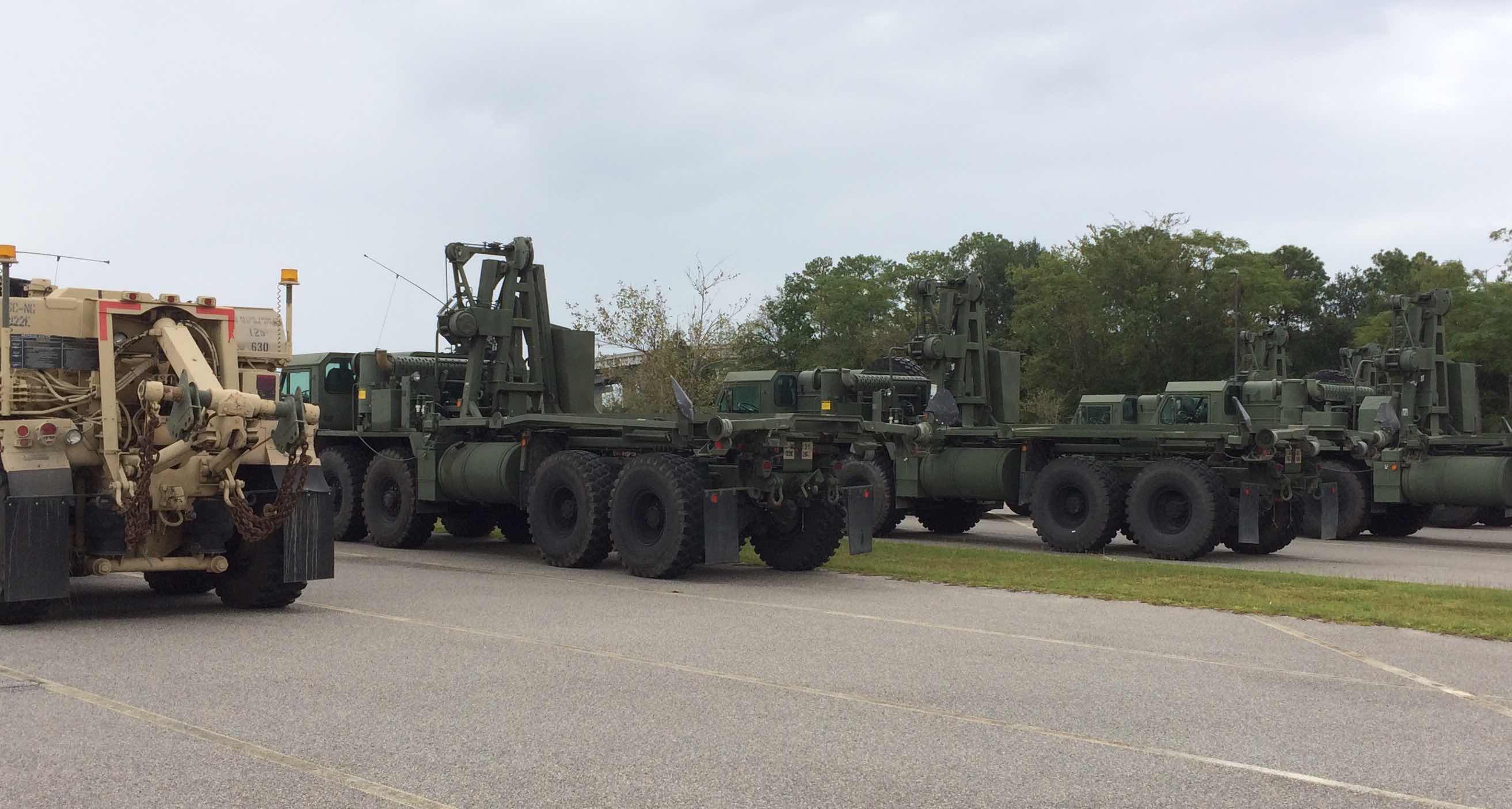 A fleet of these heavy trucks arrived, each with a huge metal box on the back, at the Sampit River marina.

The staging area is about a half mile from our house. The truck with its headlights on is backed down the boat ramp into the water. It released one of the big metal boxes into the river and slowly it opened up like an unfolding flower until it was flat on the water and afloat.  Several more boxes were dumped, unfolded, and attached together. 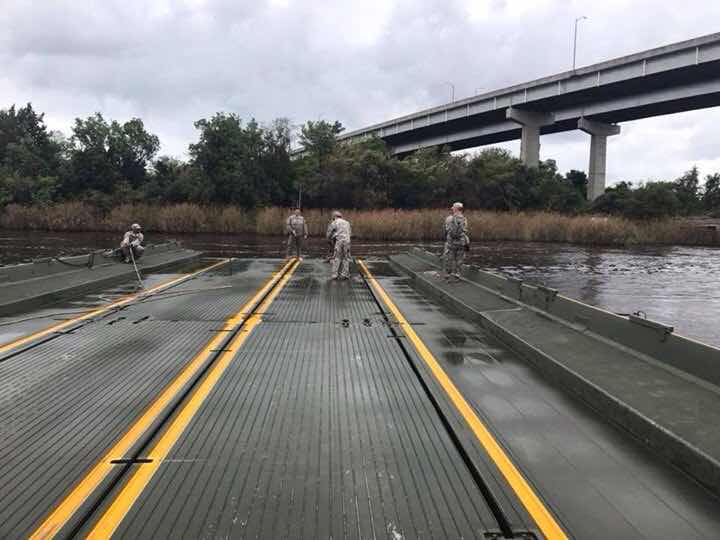 Voila!  It's a floating road, one that can hold a fully loaded semi truck of sandbags, supplies, or whatever.  It was an amazing thing to see. 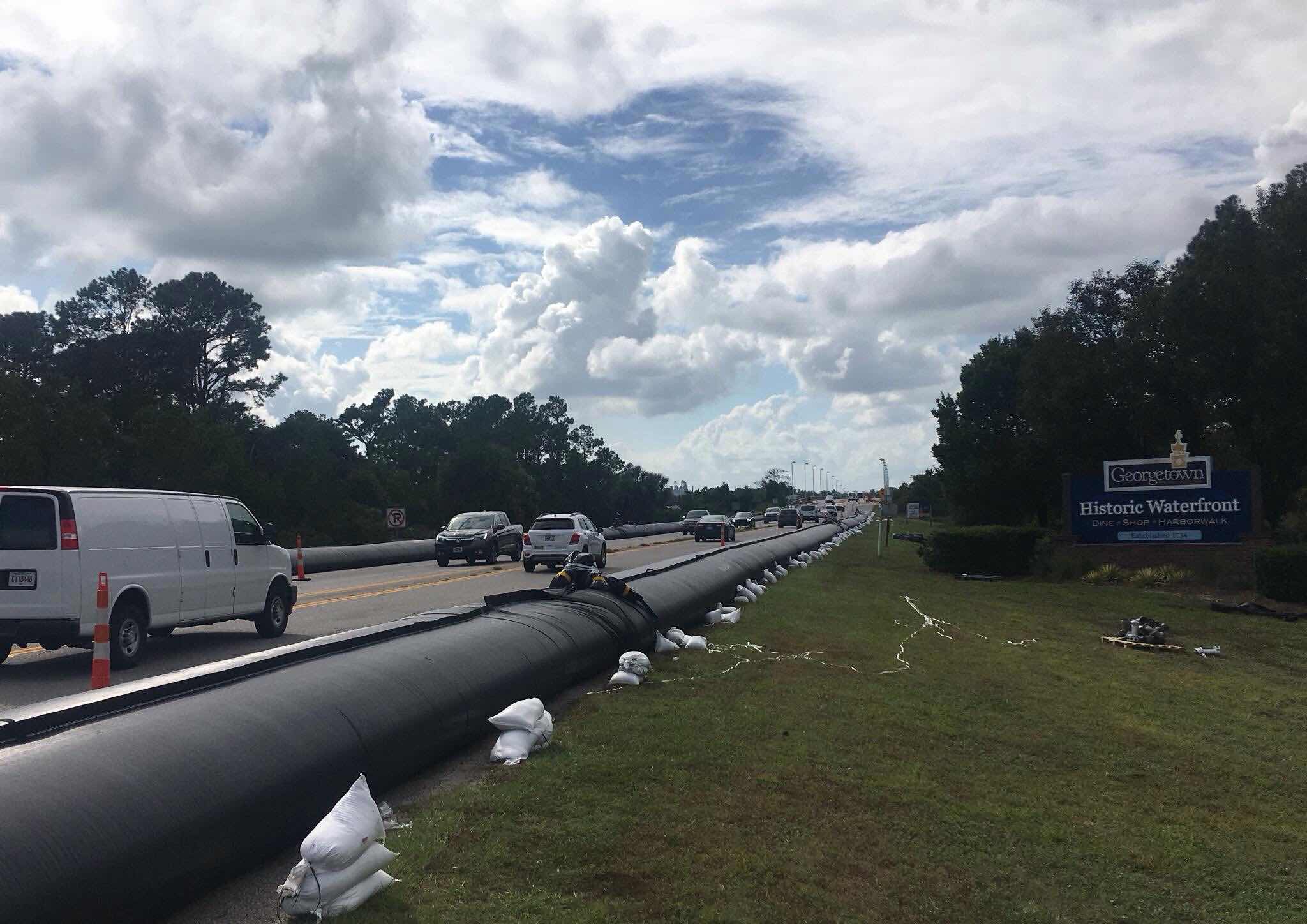 Another even bigger project is sandbagging for miles at both ends of the bridges.  These are some of the smaller plastic tubes; farther up the neck they are four or five feet tall with enormous girth. Unfortunately all this work is only a temporary fix to keep the bridges open as long as possible.  No matter what they do, Hwy 17 will eventually flood, cutting Georgetown off.  We went for a drive last night to see what we could see before the deluge begins and there was already water on the road here.  Enormous temporary lights were on and the Guard was working in the dark in the watery area to shore things up.
Unfortunately, a tropical storm will dump more water on the Carolinas at the height of the flood crest Thursday and Friday.  Eight thousand homes and businesses in the county are expected to flood.
Thank God for the helpers! 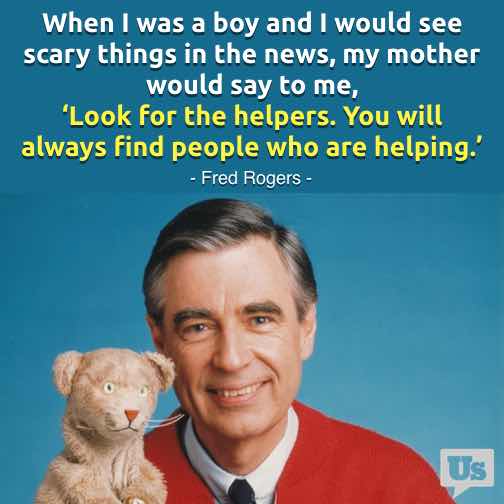 Look What Florence Brought Us!

As soon as we heard the south beach road was open on Pawleys Island, we were on our way. 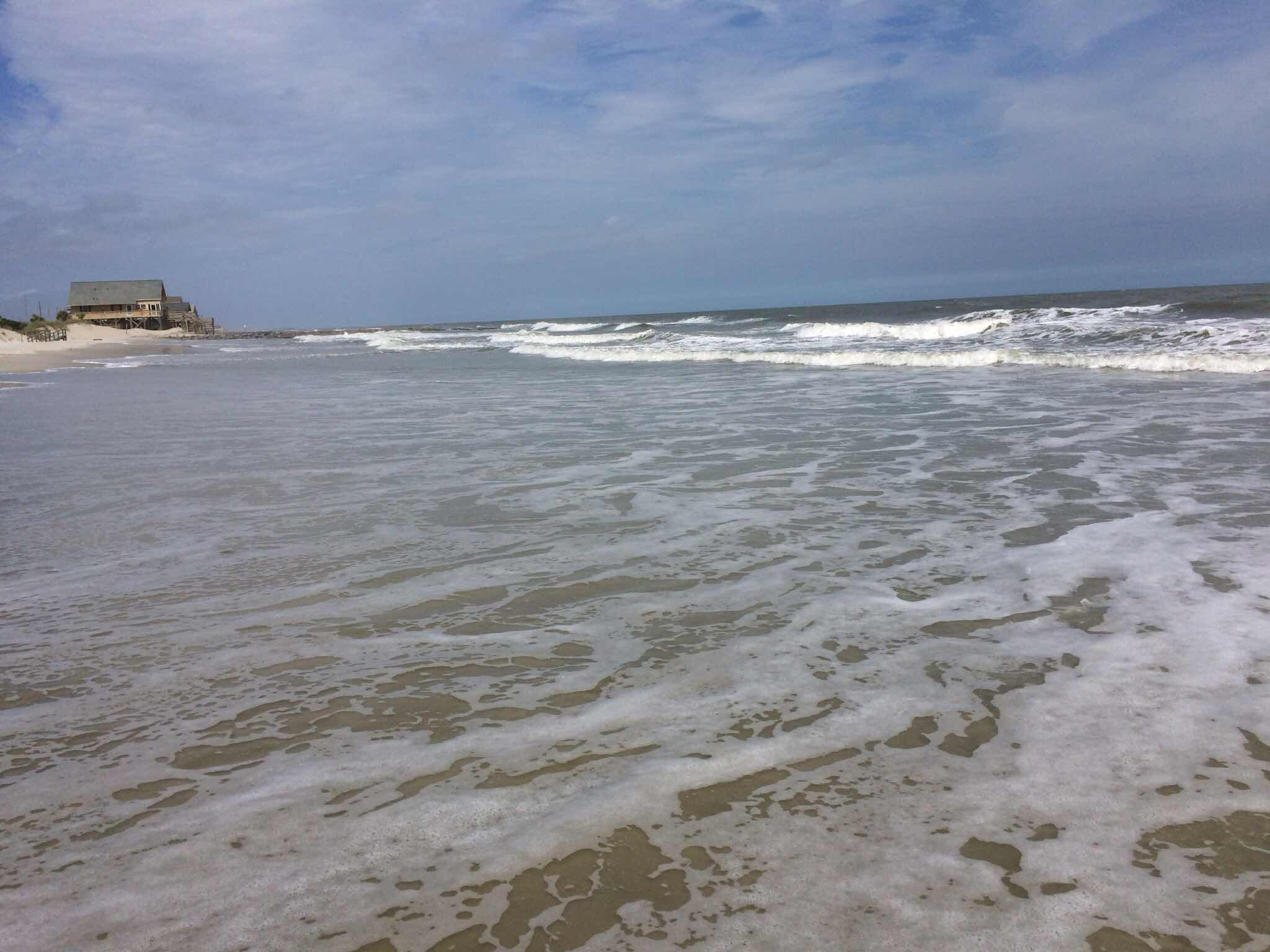 I was hoping for some pounding surf and big shells. 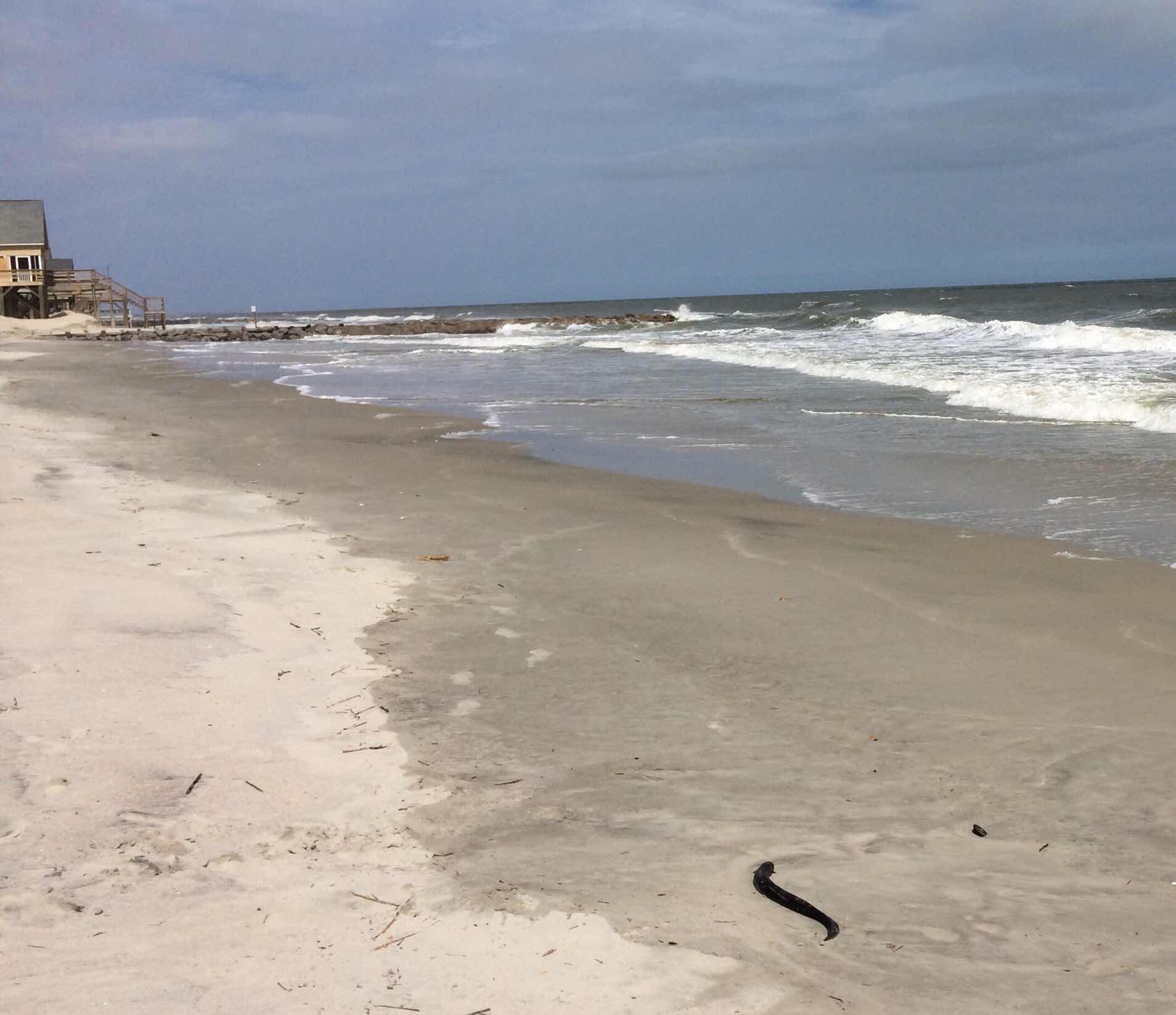 What is that?  Nothing we've ever seen on the beach before. 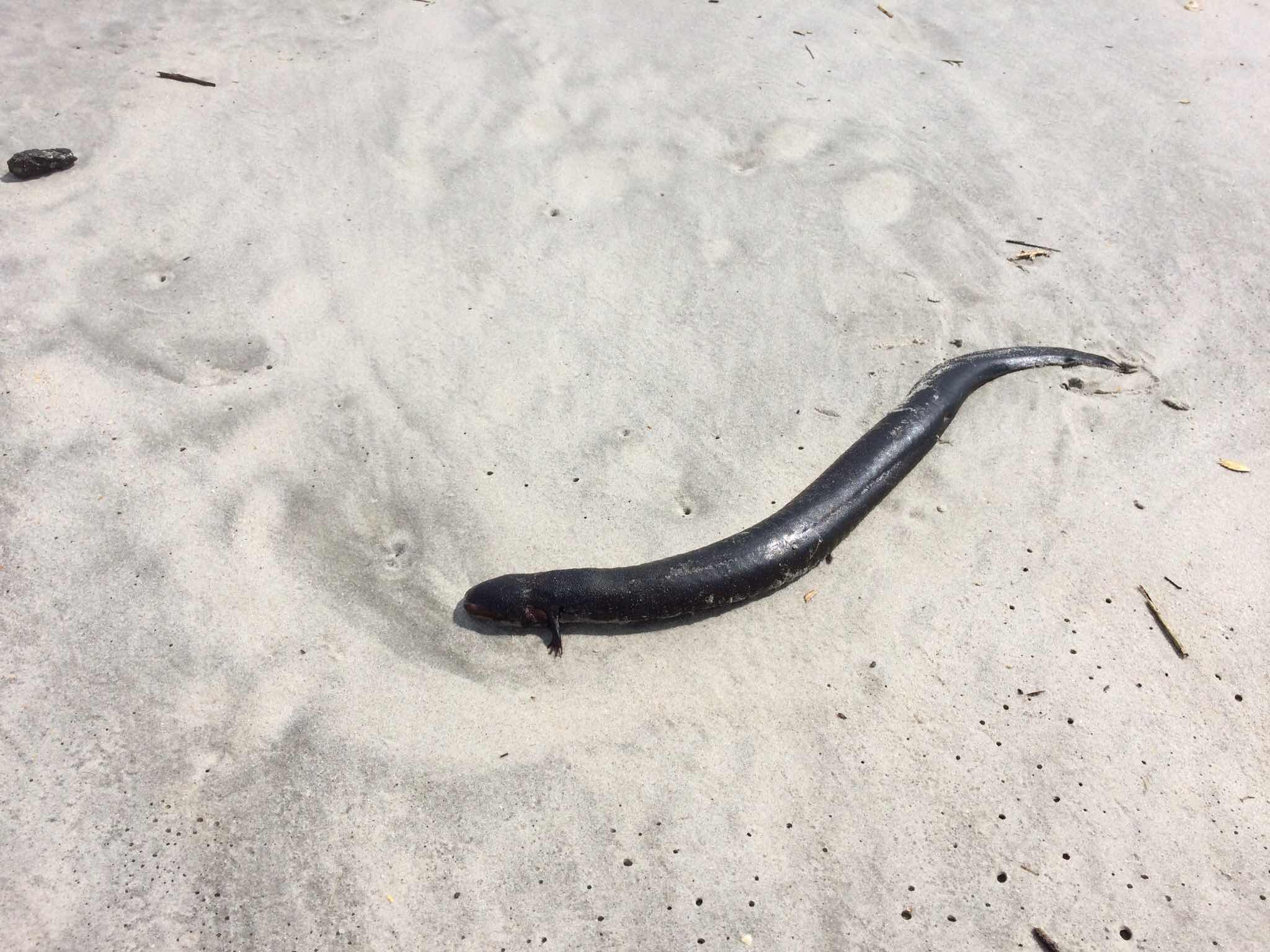 It's an eel!  A freshwater eel!
What was it doing in the ocean?
I came home and learned a lot about eels. 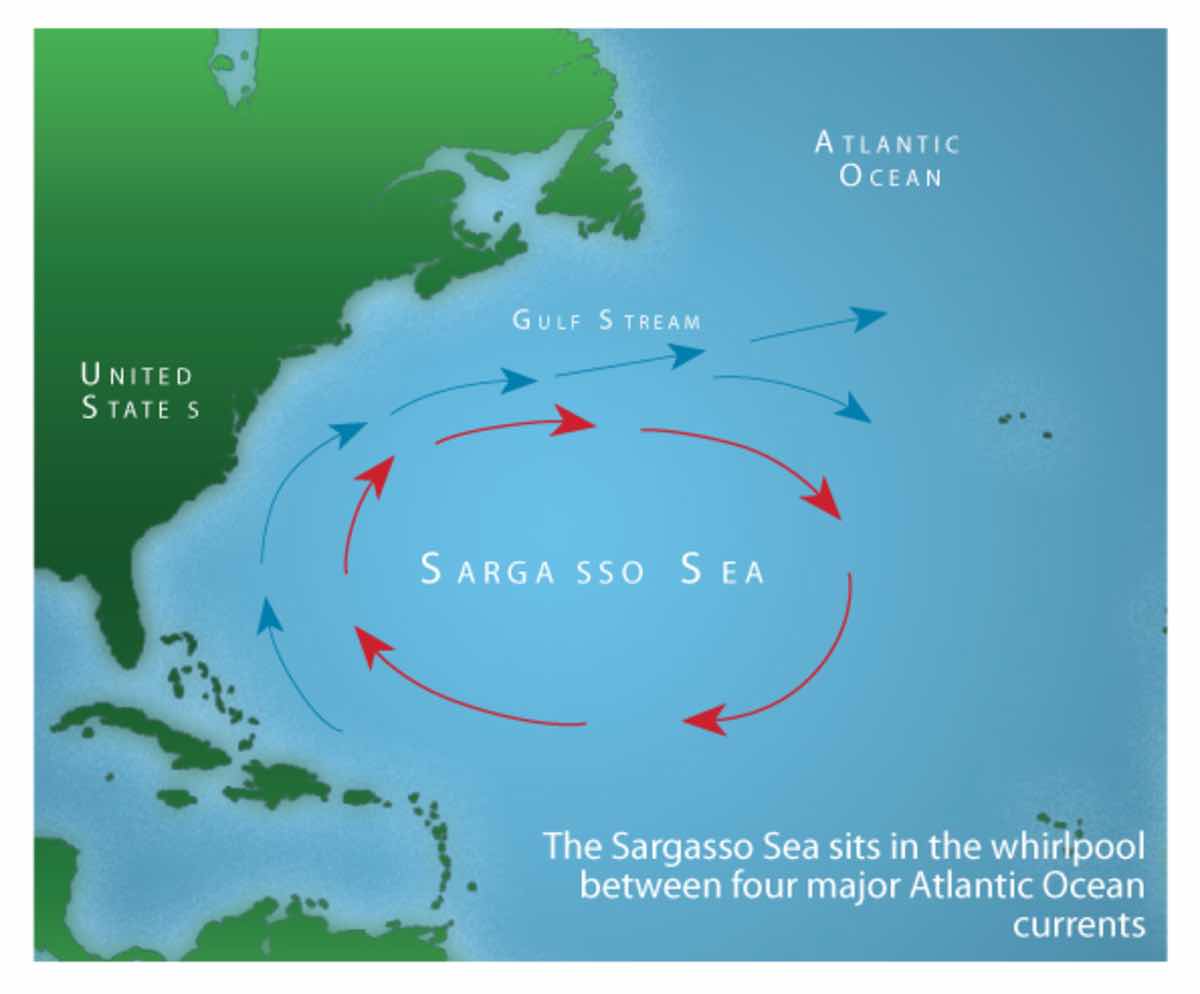 Yes, they do live in fresh water streams and estuaries most of their lives.  But after growing for five to ten years they are mature and stop feeding. Their guts begin to degenerate, their eyes double in size to see in deep water, and their swim bladders increase in number to help them swim a very long way.  In the autumn some begin making an epic journey from the rivers to the Atlantic Ocean, far out into the deep to an area of warm water called the Sargasso Sea.
American eels come from all along the Atlantic, as far as Greenland to the north and South and Central America to the south, many from considerable distances inland.  After the long swim to their destination, females release 20-30 million eggs each, the males fertilize them, and then the adults die (it is assumed -- no one has ever witnessed the actual spawning).
Sadly, the journey of the eel we found on Pawleys beach was interrupted by a hurricane called Florence.
Posted by Cynthia at 2:44 PM 13 comments: 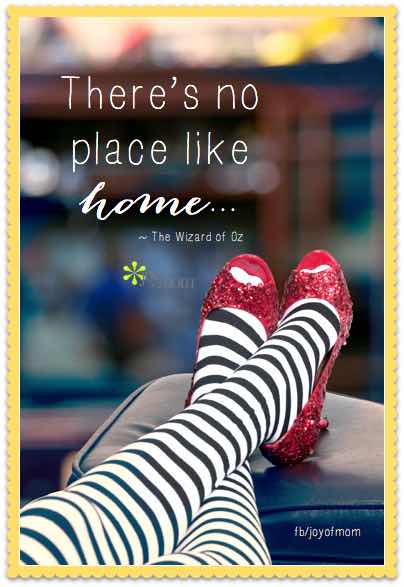 Dorothy knew what she was talking about, didn't she?
We left Laurens early yesterday and did well using backroads rather than the Interstate.  Plenty of rain but nothing dangerous and Ms Google (as we call her) warned us whenever we should change our route because of flooding.

We actually enjoyed the trip.
Bob and Rosie are good travelers, and there are so many wonderful old things to see on the blue highways of South Carolina, the roads we prefer to travel.  This abandoned business is in the middle of nowhere near Santee.
We had the best news when we got home: no damage to our house or trees.  Just a lot of tree stuff to pick up when all this is over. What a relief!
Now we await flooding.  Georgetown is at the confluence of five rivers, on a bay of the ocean, with some tiny barrier islands between us and the Atlantic.  All the rivers north and west of us are gathering rain water and escorting it down through the coastal towns on the way to the sea in the next few days.  And meanwhile, it has not stopped raining here.
☔️   ⛈   ☔️
As happy as we are to be home, as tired as we got of that motel room, we are also grateful for sweet experiences in Laurens.  On Saturday we came back to our room after a drive and a picnic lunch and were completely surprised to find some kind person had left us a little note and two $20 McDonalds gift cards at the desk!
Posted by Cynthia at 10:02 AM 18 comments:

The governor-ordered mandatory evacuation of Georgetown began at noon Tuesday and we scrambled to find accommodations that accept pets.  We ended up in the northwestern corner of the state in a motel in Laurens, pop. 9000.  Lucky for us, the old motel was just finishing renovations and we have a spacious room with all new furnishings, including fridge and microwave. 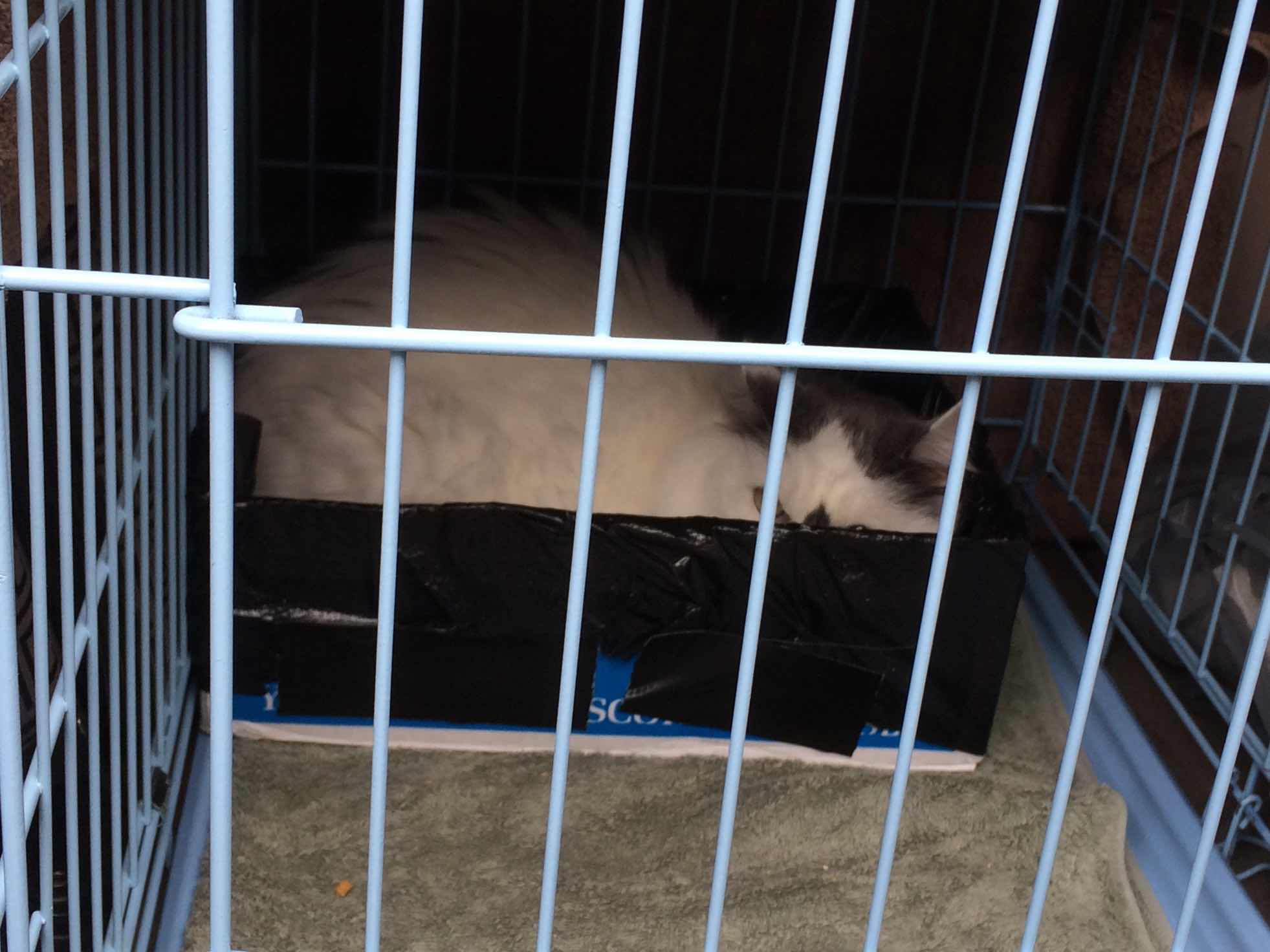 Rosie, on the road, eyes peeking over the edge.  Very grumpy. 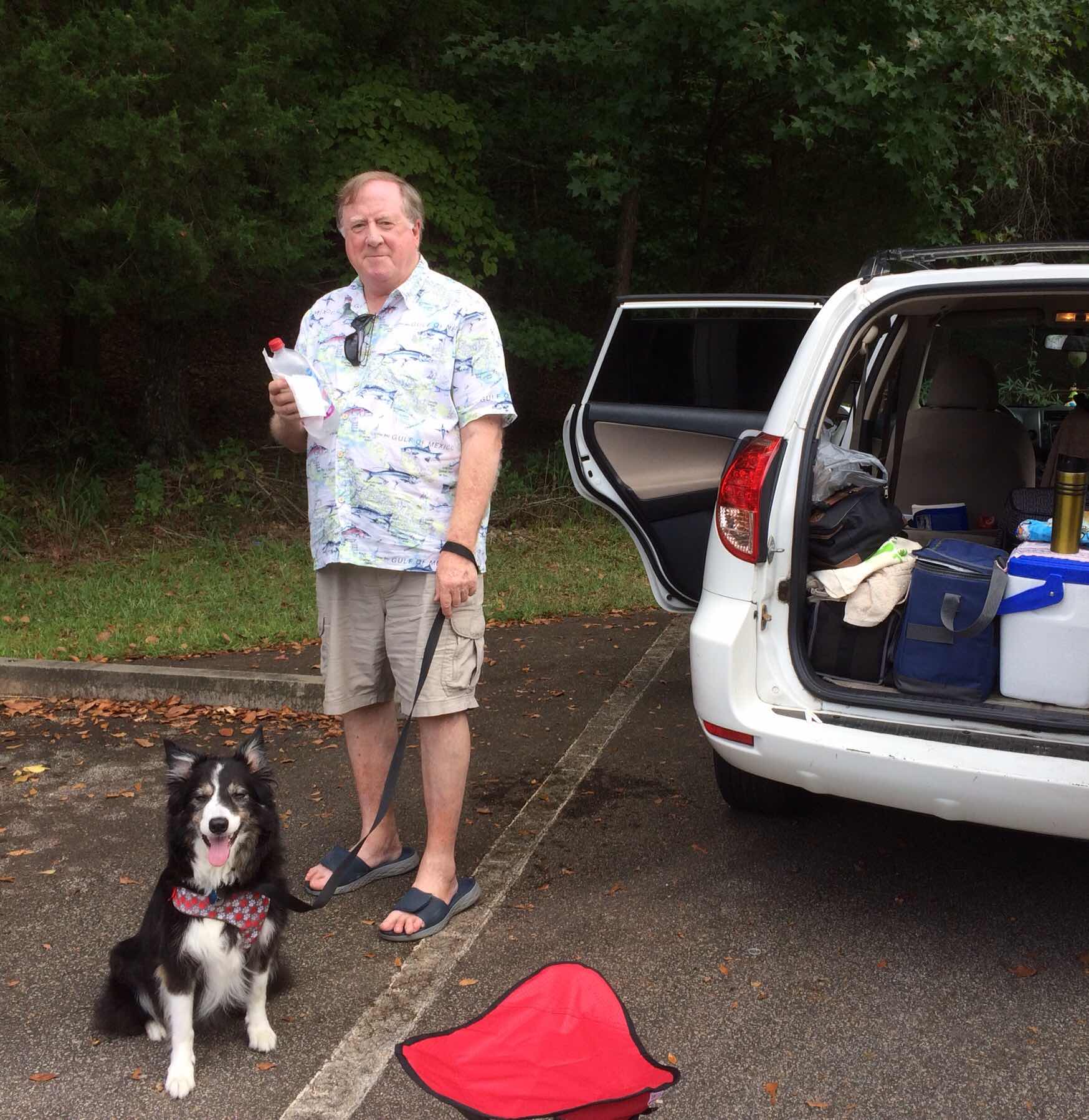 Bob, thrilled to be going for a RIDE anywhere WITH THE PEOPLE, in the CAR.  Very happy! 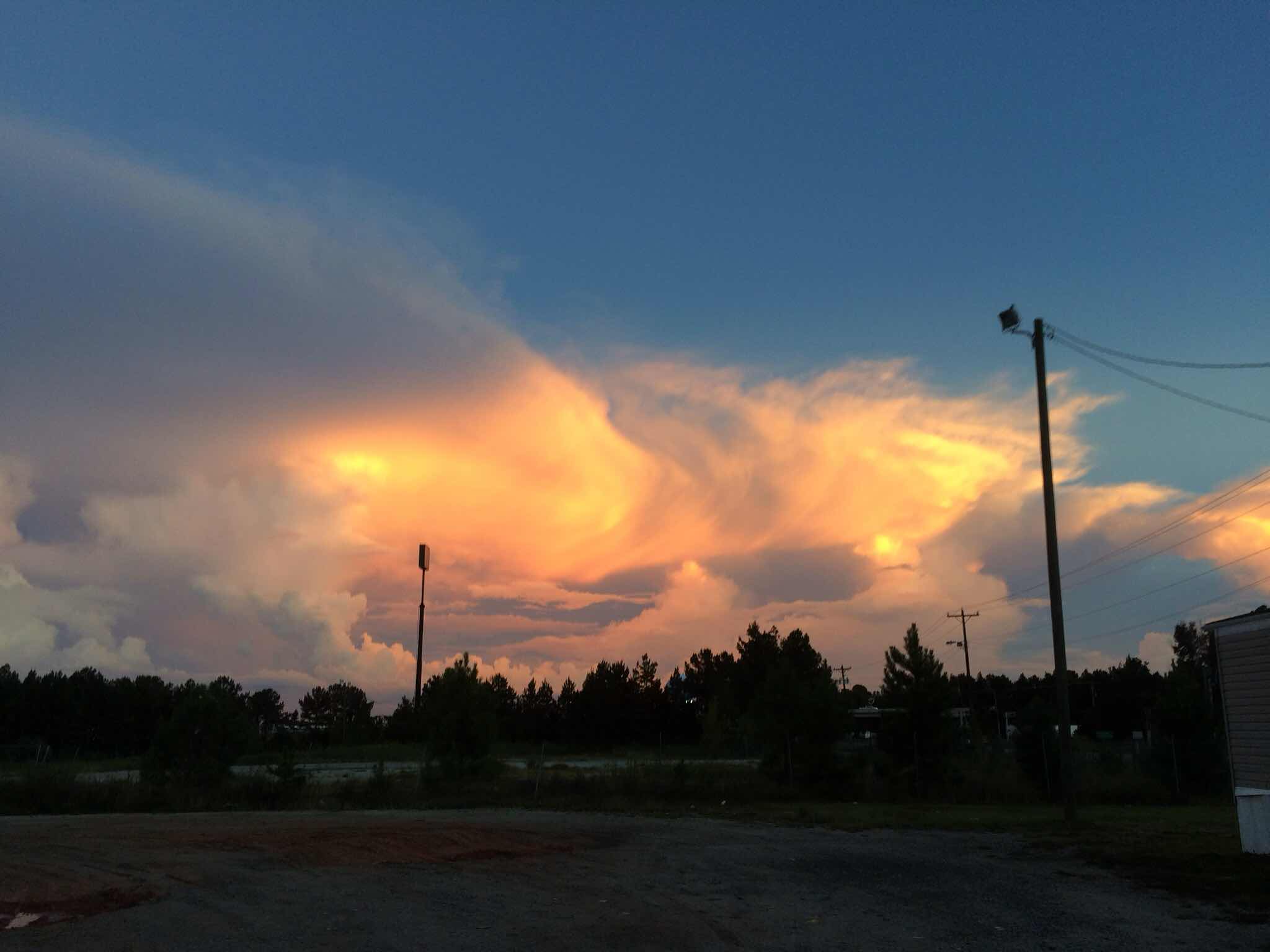 Last night from the motel: the outer bands of Flo.  You can begin to see the rotation in the clouds.  How can something so beautiful be so destructive and deadly?  The predictions change from hour to hour but at the moment it is expected to come ashore about an hour north of Georgetown at Myrtle Beach with winds reaching 105 mph and storm surge up to 13 feet. We will most likely be among the hurricane refugees in Laurens until Saturday of Sunday.
Posted by Cynthia at 5:19 AM 17 comments:

Batten Down the Hatches, Florence is on Her Way!

A hurricane can change its path and we hope that it does, but for the time being Florence is barreling right at us. 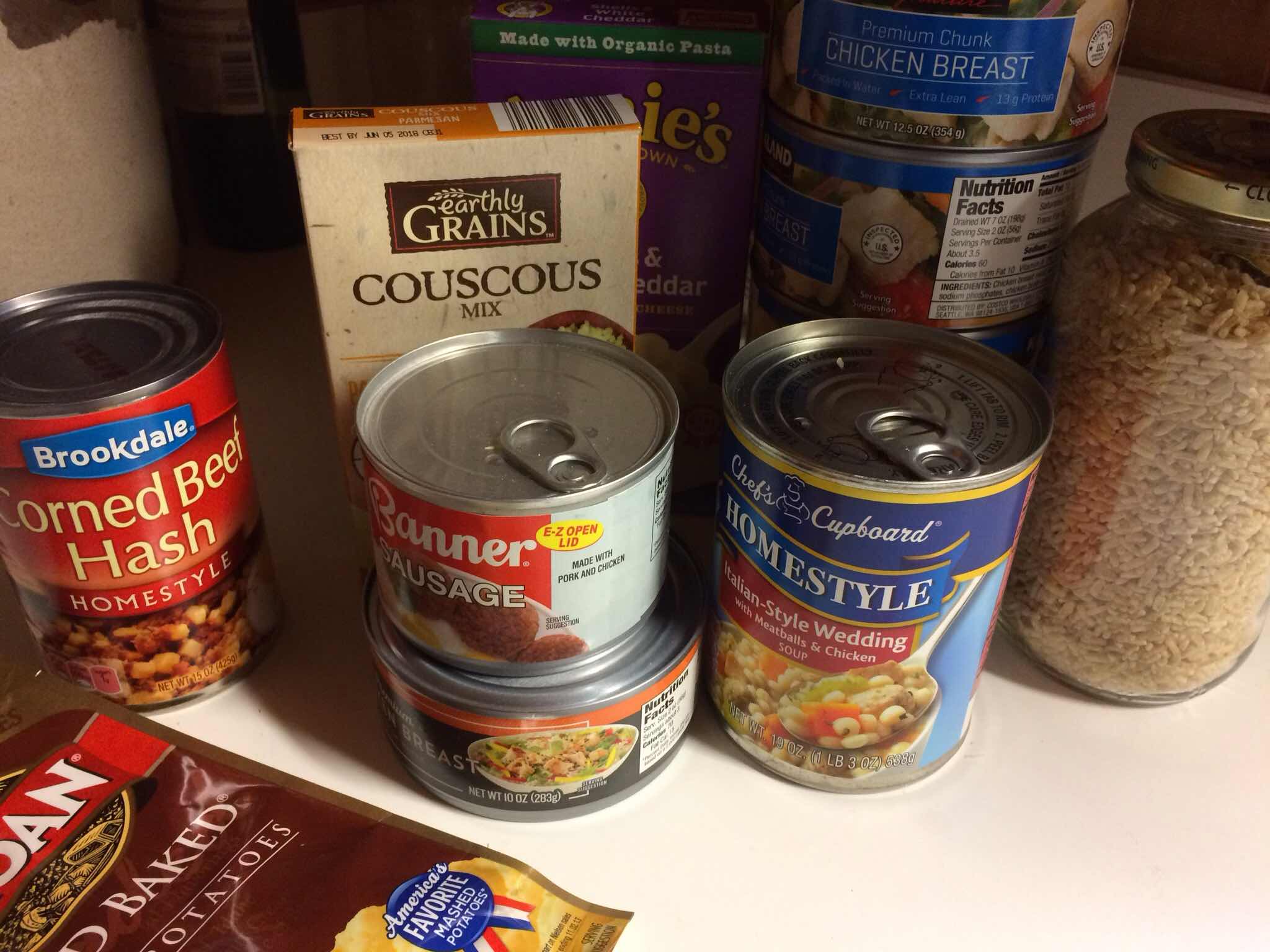 We will be without electricity for days if we get a direct hit.
So we are getting food and fresh water ready, eating up what we can from the fridge and freezer.
Over the next day or two we will bring the potted plants inside, gas up the car, test the camp stove, and keep one eye on the National Weather Service at all times.
It doesn't seem fair that we haven't even had a full week of the tourists being gone and our roads and beaches to ourselves before we are preparing for a hurricane. 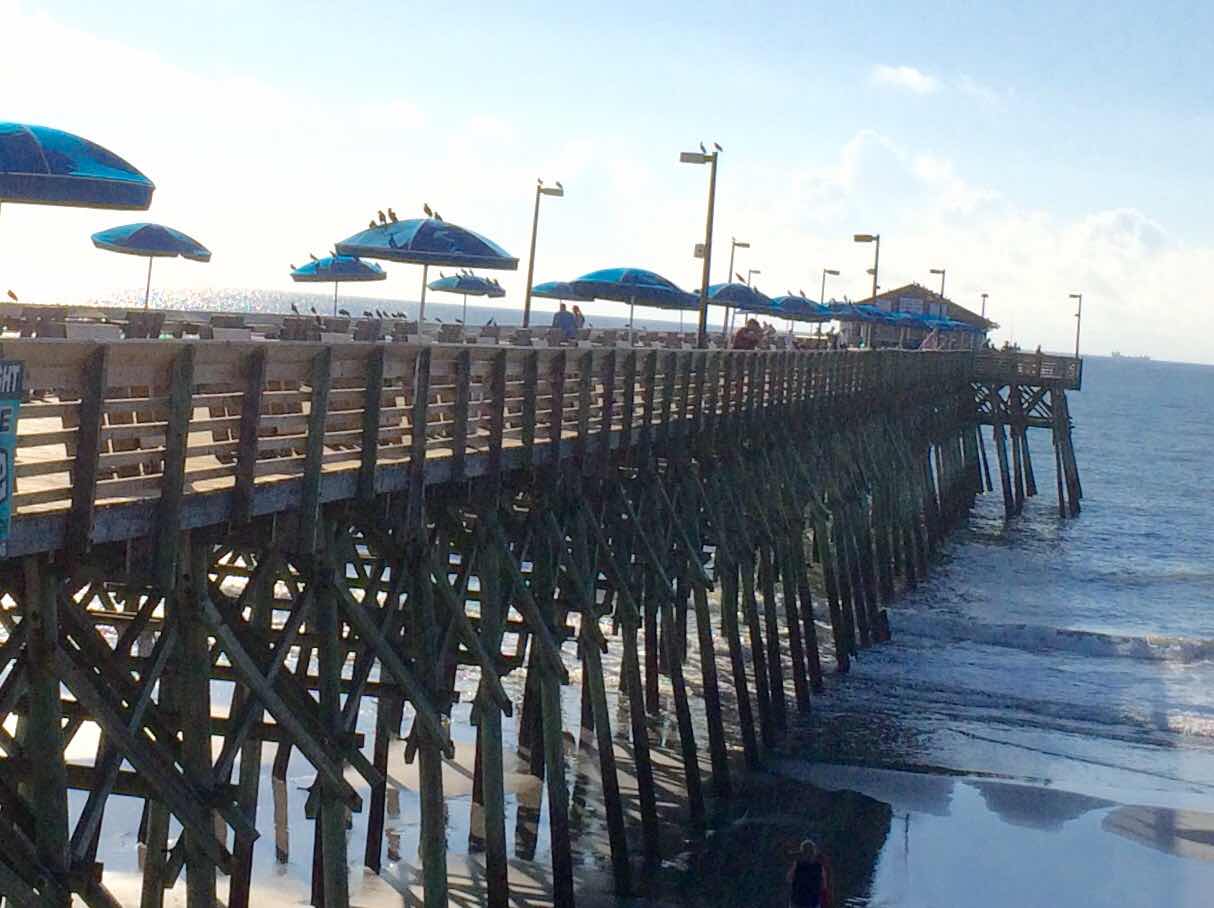 We have been waiting all summer to enjoy the new pier at the little beach community of Garden City.  They lost their pier in Hurricane Matthew and it took nearly two years to raise the money and get it built.  We had breakfast there this week with only the birds for company and it was so peaceful and lovely. 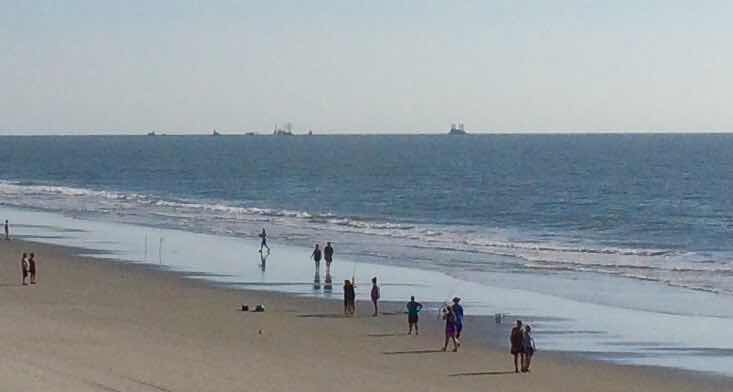 There were a few fishermen about and some large boats working off the coast.  Not sure what they are doing. 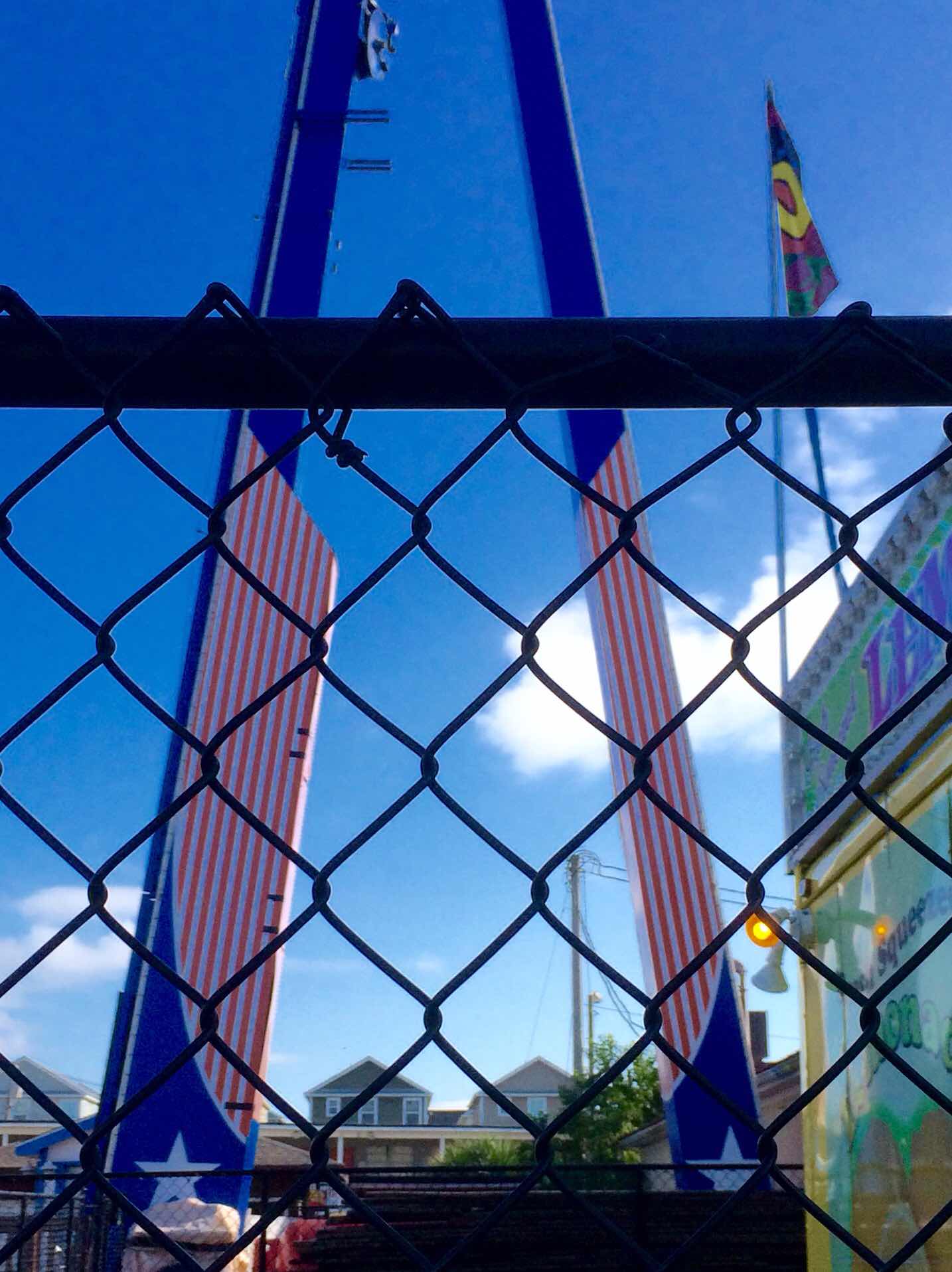 The amusement park gate is closed and locked.
Plenty of parking places available on the street at the arcade. 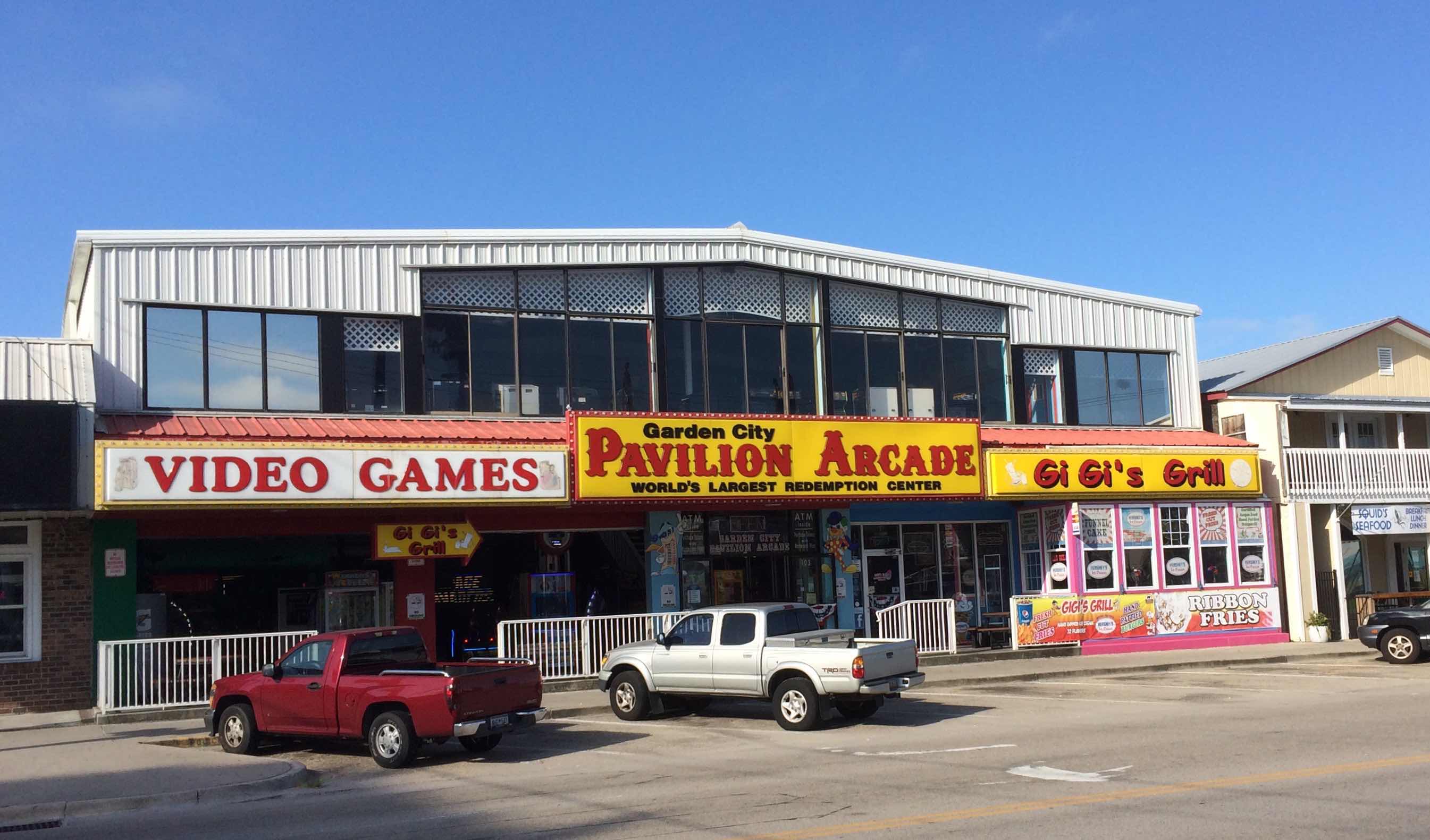 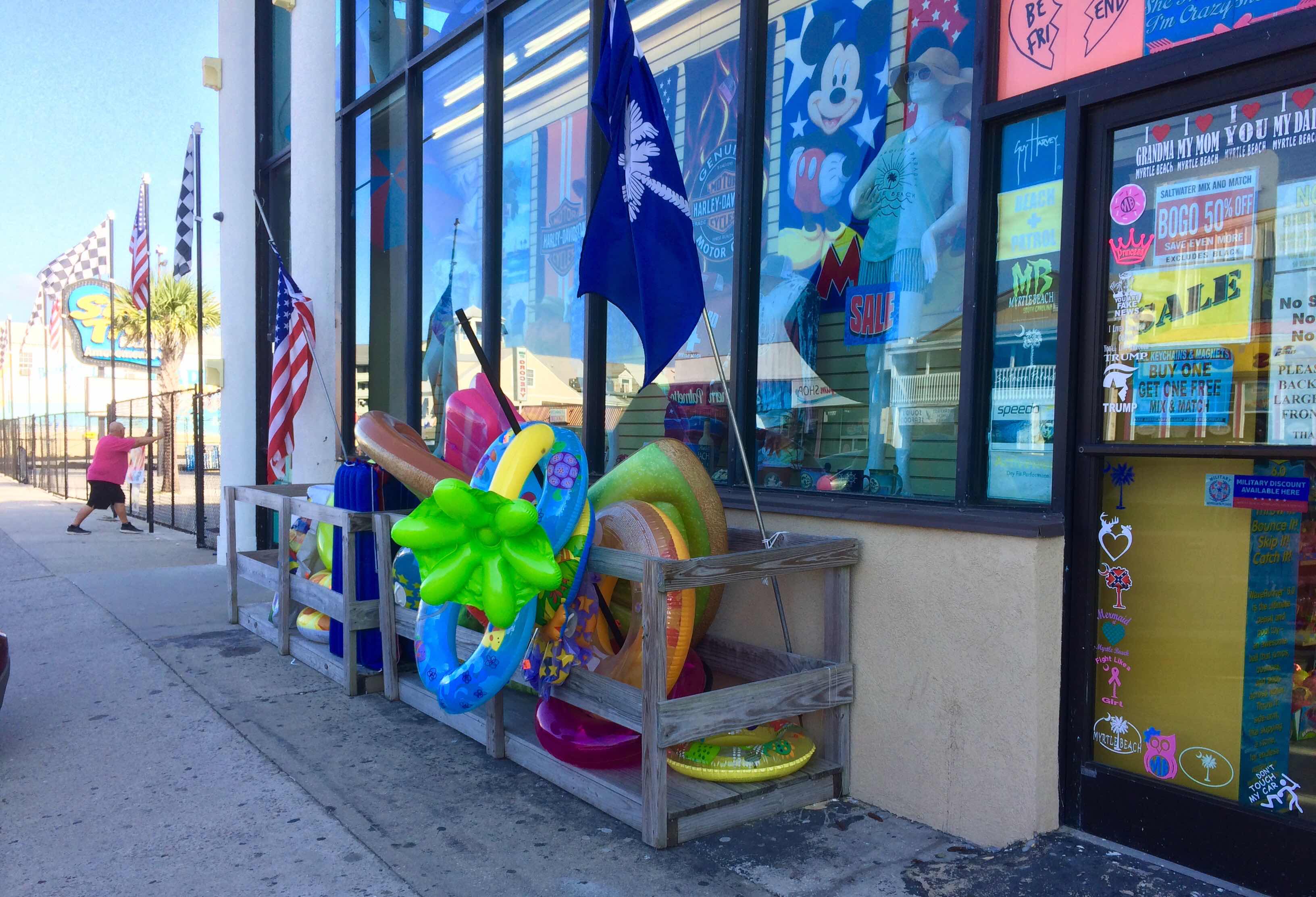 The Labor Day sales are over, the beach toys not chosen tired and droopy.
I hope Florence doesn't smash up Garden City's lovely new pier.

My daughter sent these pictures of Mason last night walking his dog, Annabelle, in the park.  Minnesota schools have K-4 (4-year old kindergarten) for the first time this year so Mason will be going to school and riding a big yellow school bus next week. He is over the moon with excitement and anticipation, his mama says. 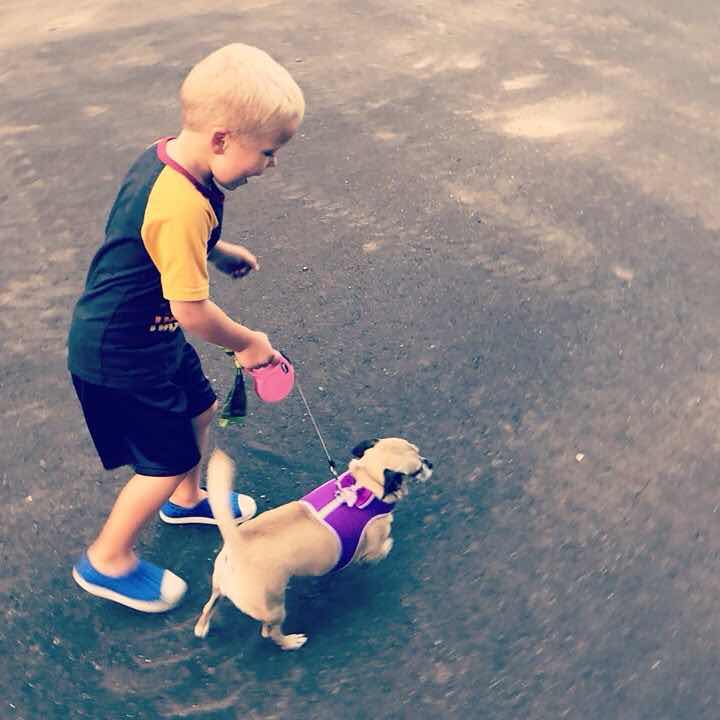 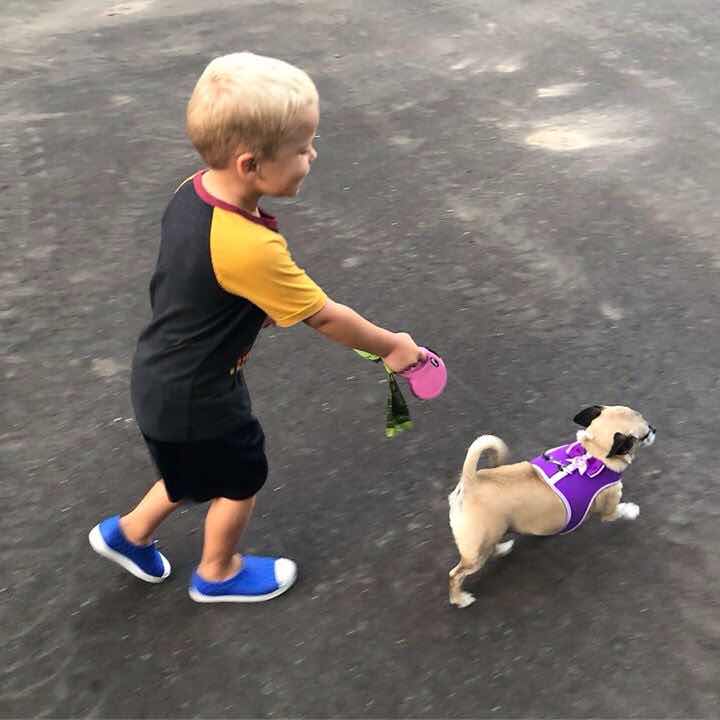 Annabelle and his mama will miss him.