I thought you might enjoy seeing a couple of my Valentine cards.  The first one is from Bob the Border Collie. 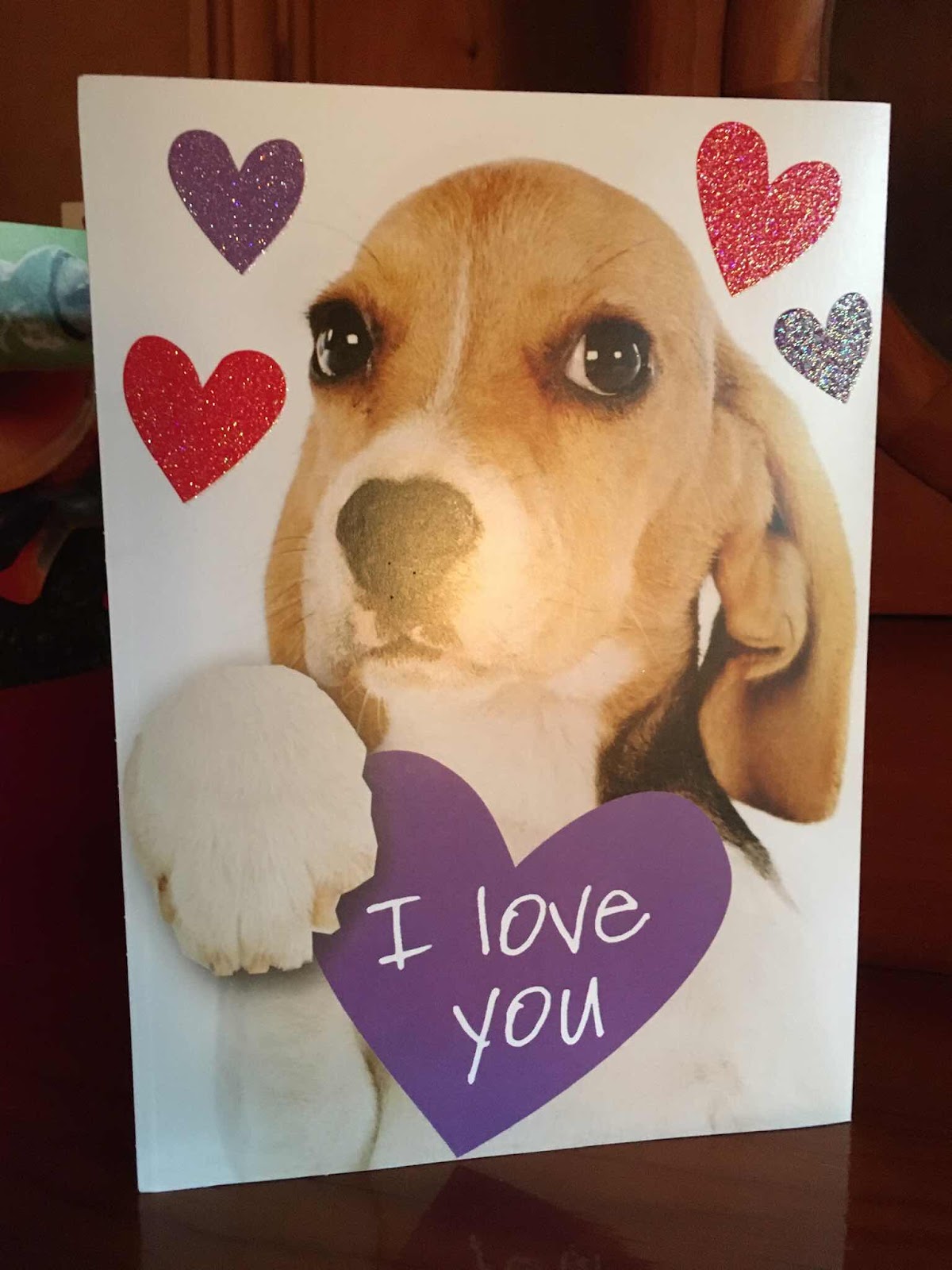 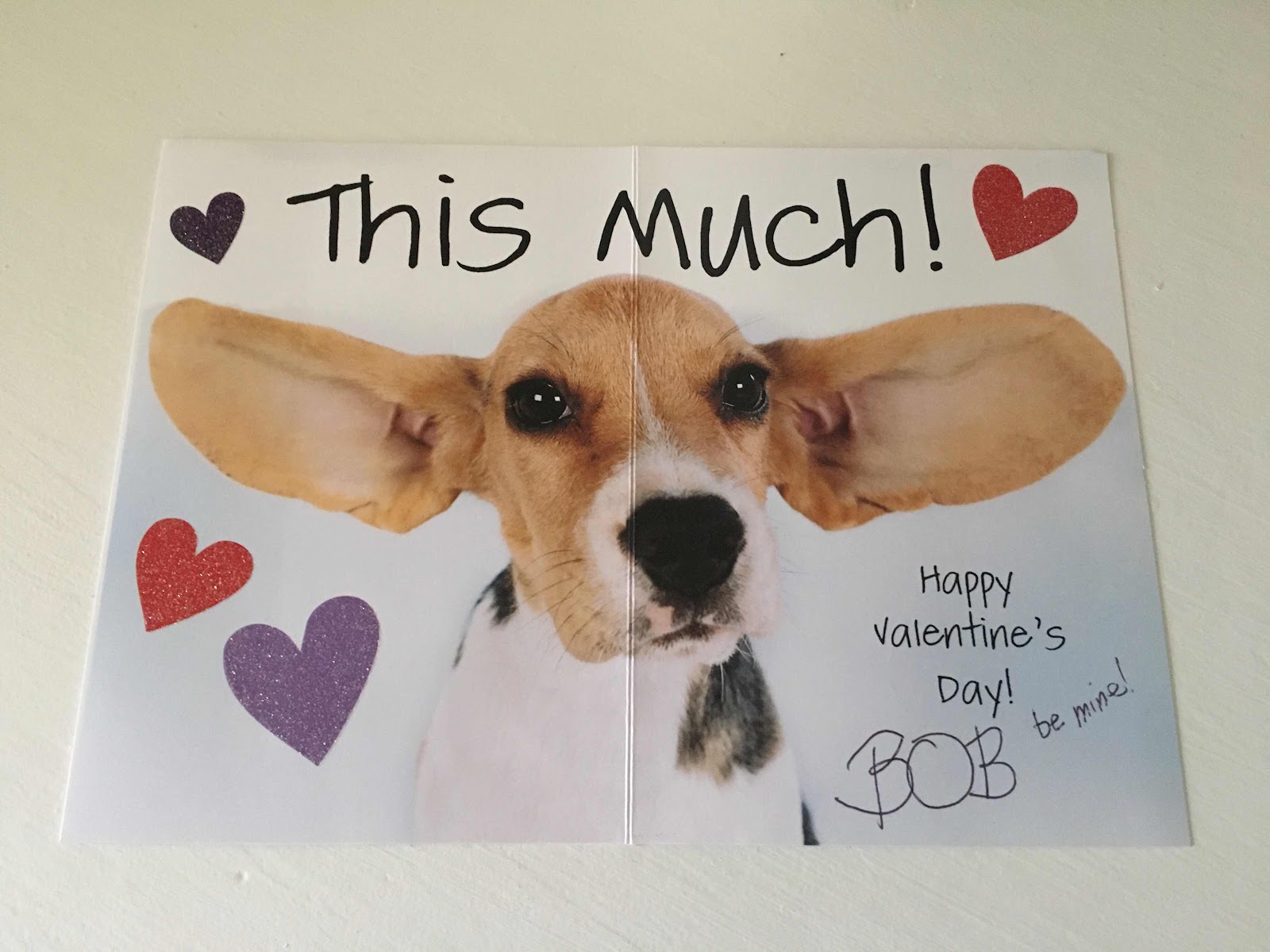 The next one is from Rosie the cat. 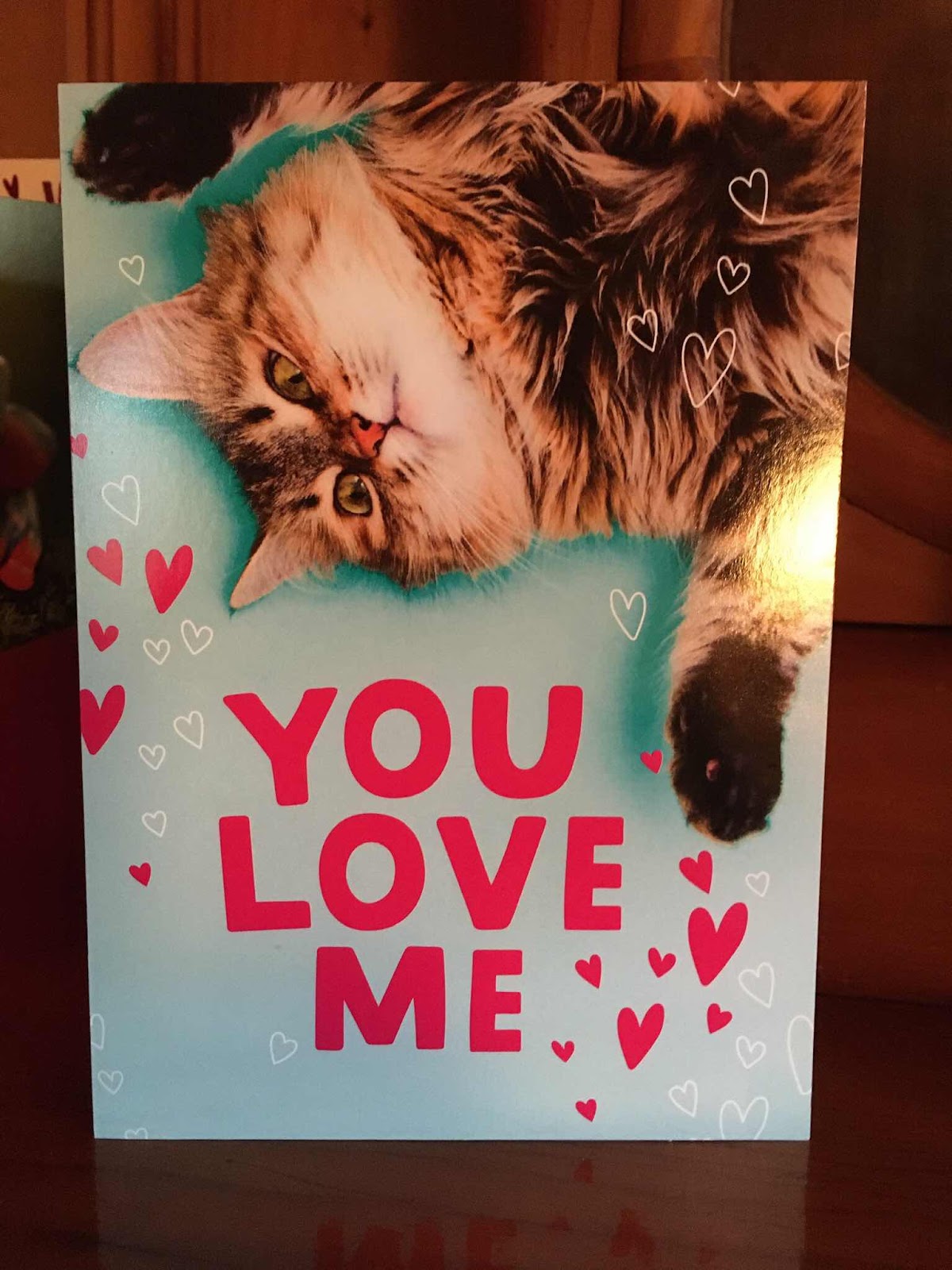 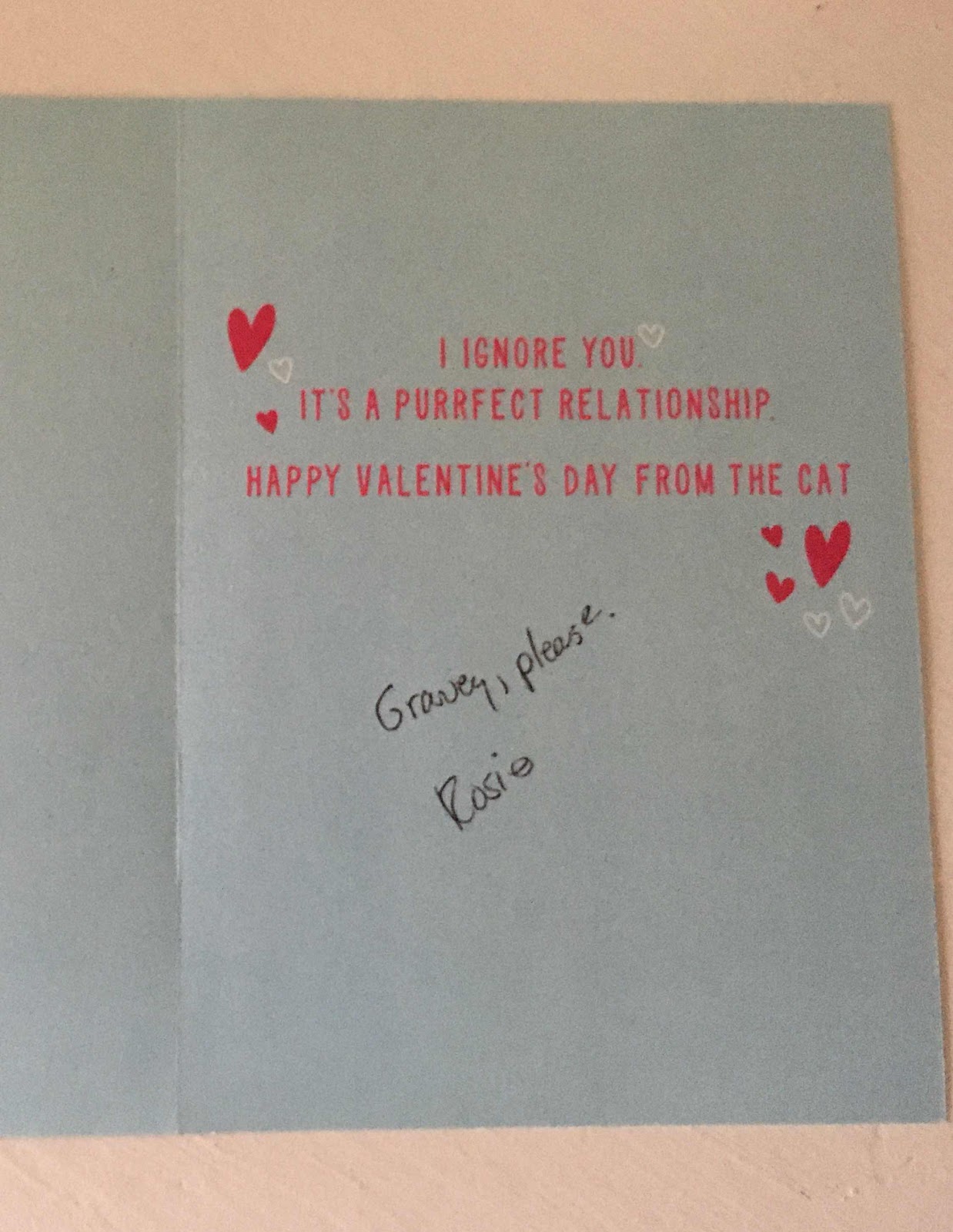 Their personalities, captured so well .... 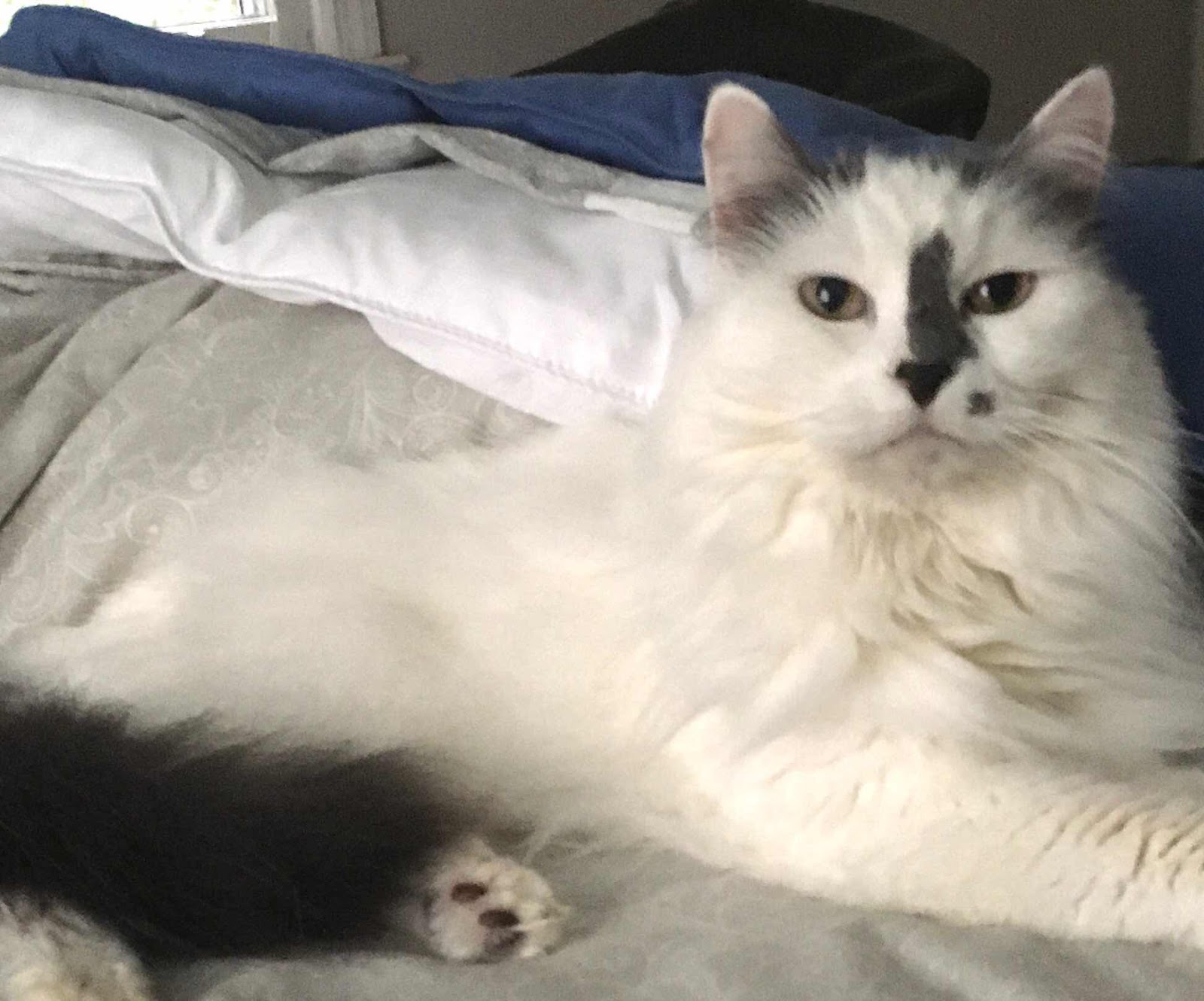 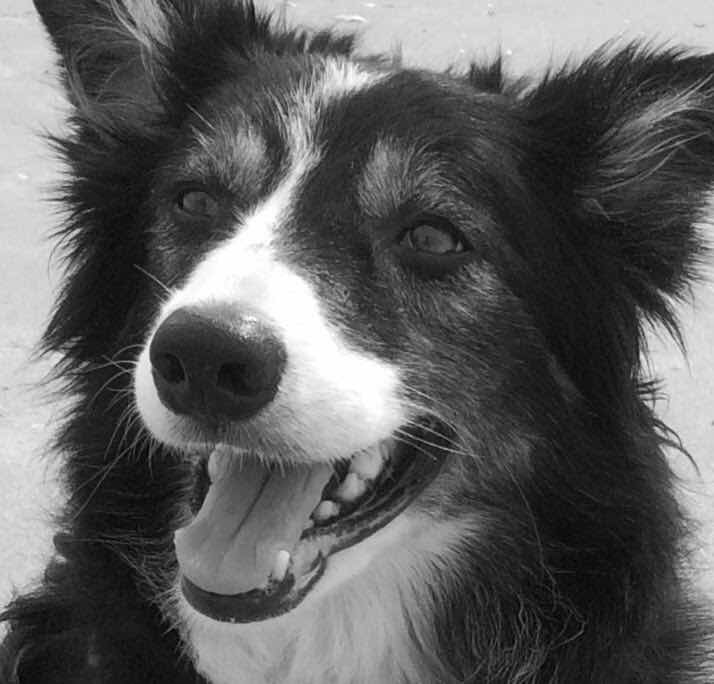 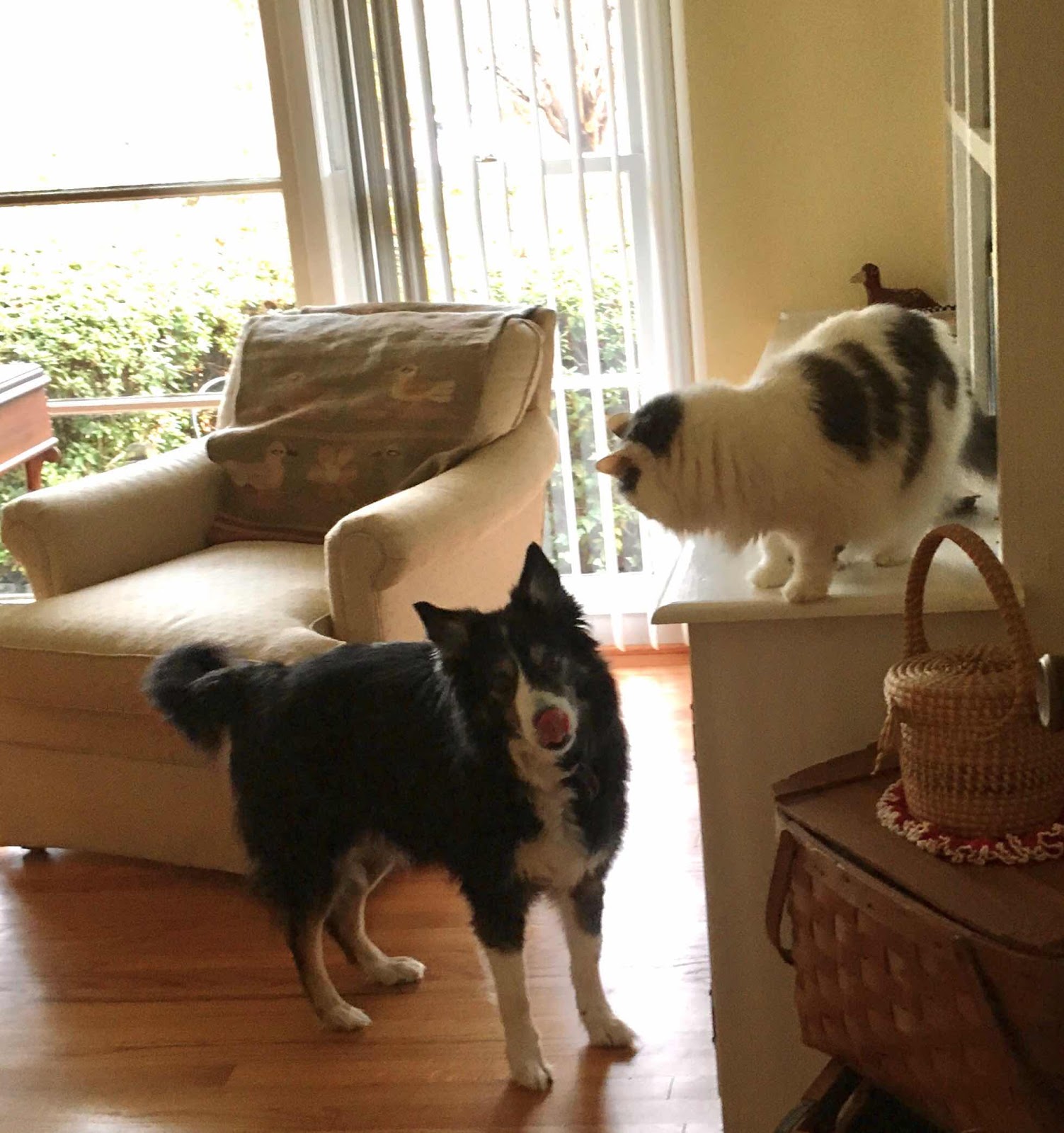 Rosie will be 14 years old in April, in people years an old lady cat. We’ve had to change her diet recently from dry crunchies to wet food and it continues to be a challenge to find something she will eat.  Here she has rejected yet another smelly offering.  Bob is licking her chops, hoping for the rejects, and Rosie is telling her she is one disgusting dawg!
Posted by Cynthia at 11:30 AM 16 comments:

Woo Hoo! Back at the Beach!

First beach walk (on my new knee).  I thought it would be hard getting through the loose sand and out to the harder surface near the water, but it was fine and we enjoyed a long walk.  It couldn’t have been a more beautiful day to be out there.
Horseshoe crab bodies are beginning to appear, as are washed-up jelly fish.
Also lots of these ... 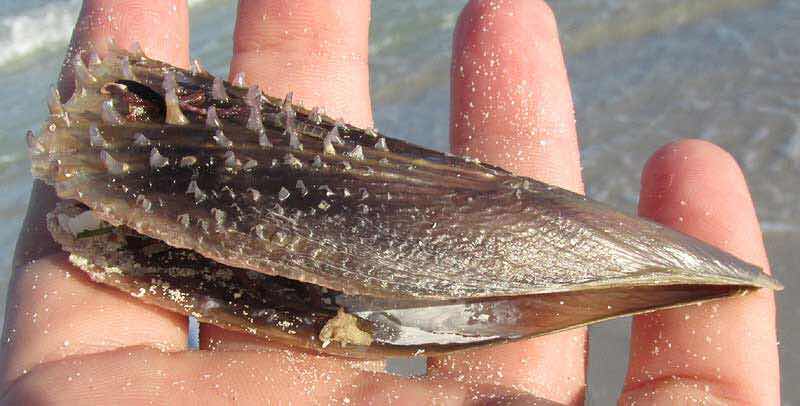 Pen shells, home of an edible mollusk related to clams, wash ashore as the waters begin to warm.  They can grow to be 12 inches long, I’ve read, but the ones we see are four to maybe five inches long.
In the water, the pen shells dig down into the sand with their pointed end until only the fringe top part of the shell is left above the sand.  Then they spin threads from a gland in their foot and attach themselves to a hard object such as a piece of rock or a large buried shell. 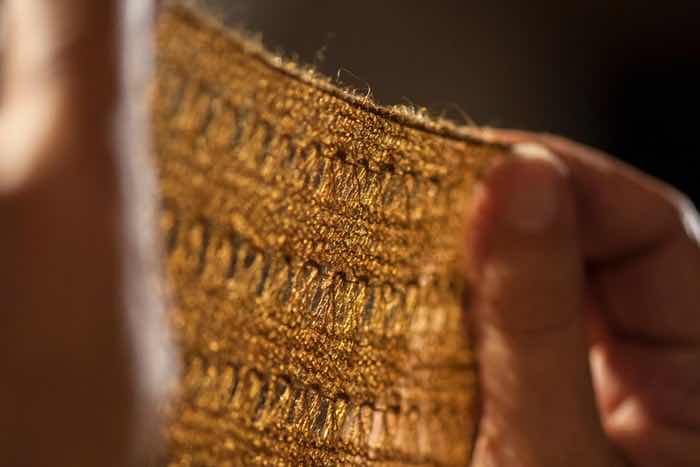 These threads (called byssus) were harvested in ancient Mediterranean countries and China and weavers wove the “sea silk” into highly prized golden yellow cloth.  The practice continued into the 20th century and there are still a few artisans who continue the tradition in Sardinia.
Now the main value of the pen shells is their job as filter feeders that help to keep our increasingly polluted seas a little cleaner.
Once a pen shell is pulled loose from the bottom it cannot reattach, and these are the pen shells that wash up on the beach.
That isn’t all we found at the beach though.  Someone had been having a whole lot of delightfully creative fun! 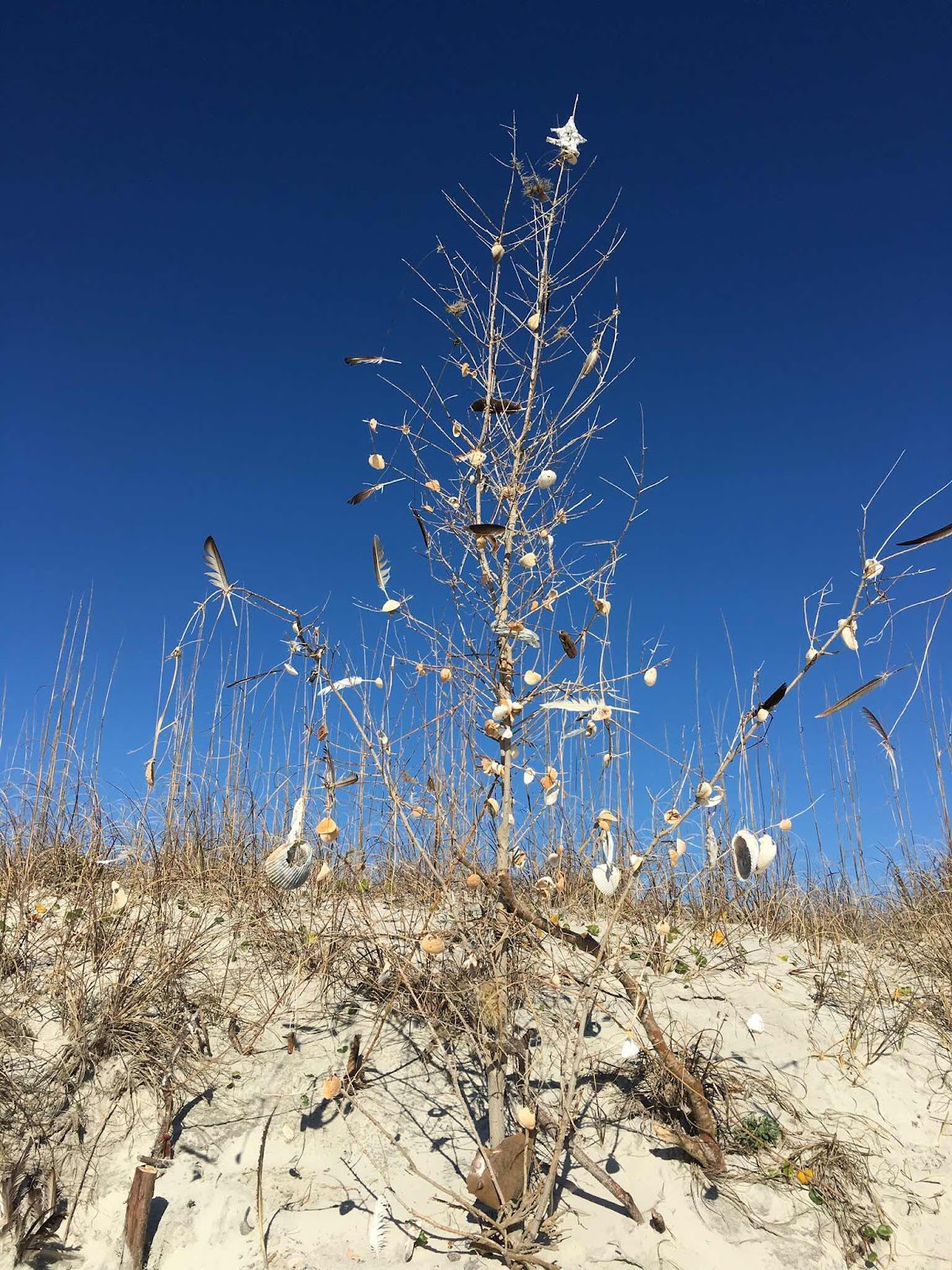 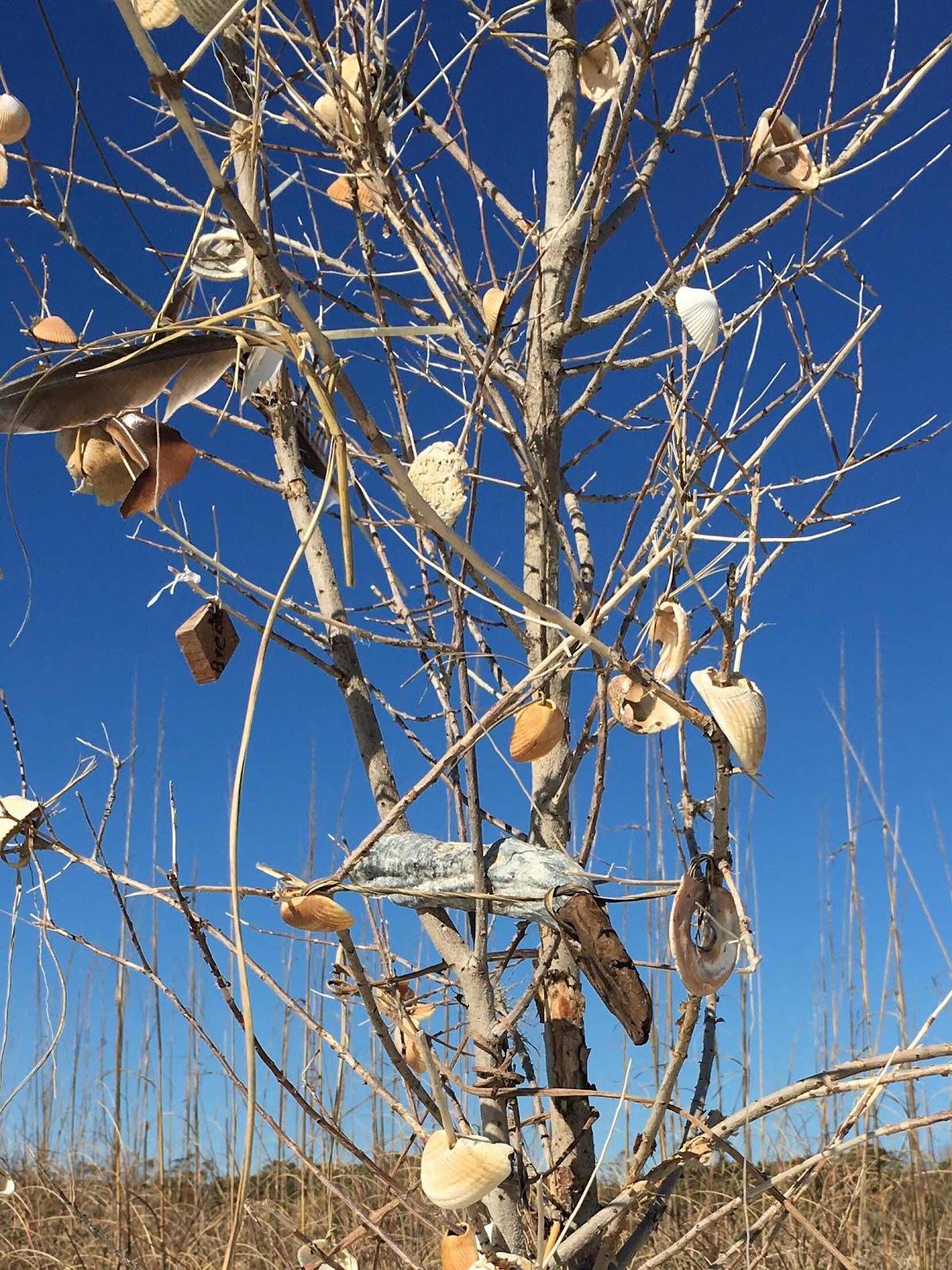 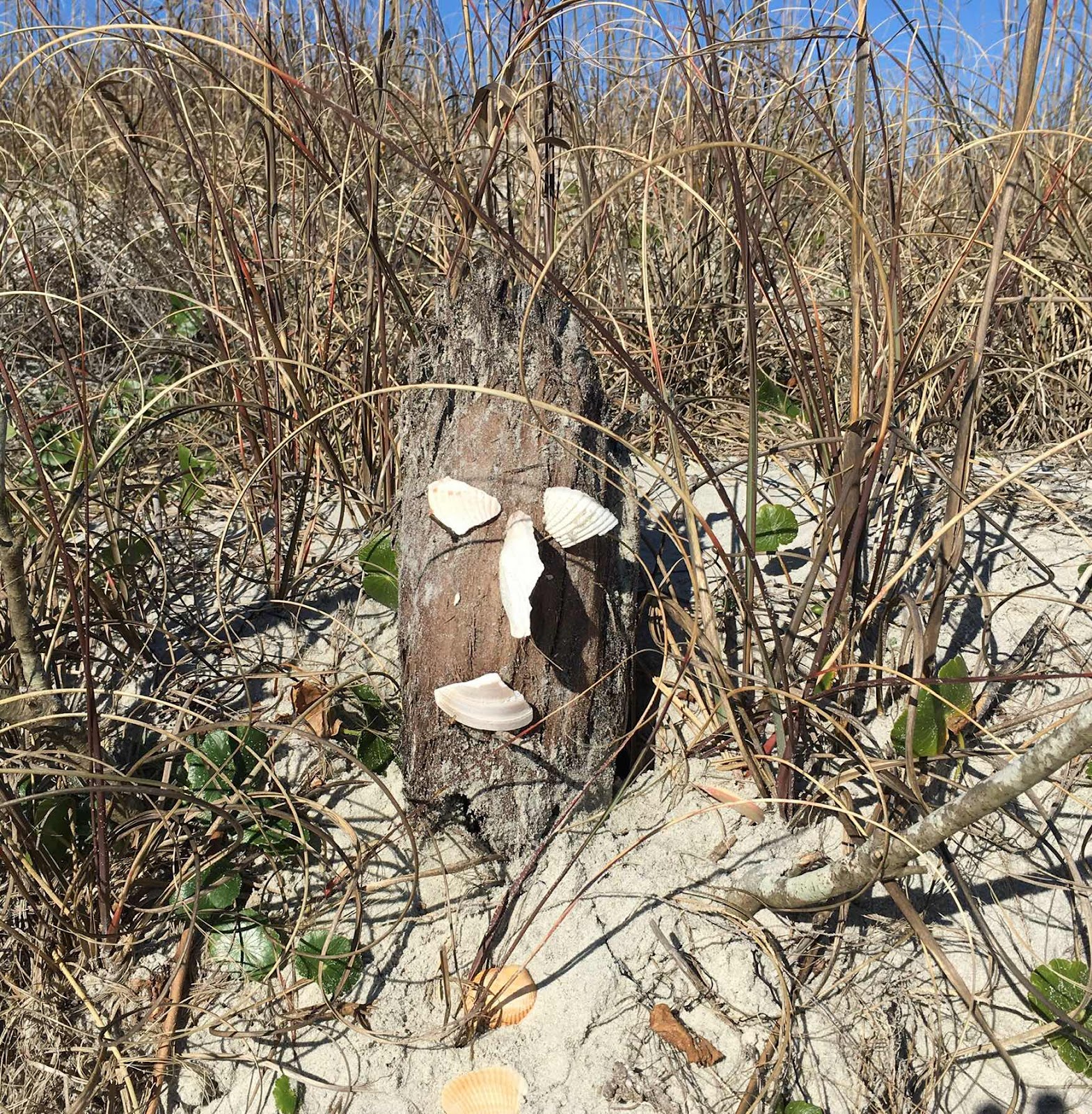 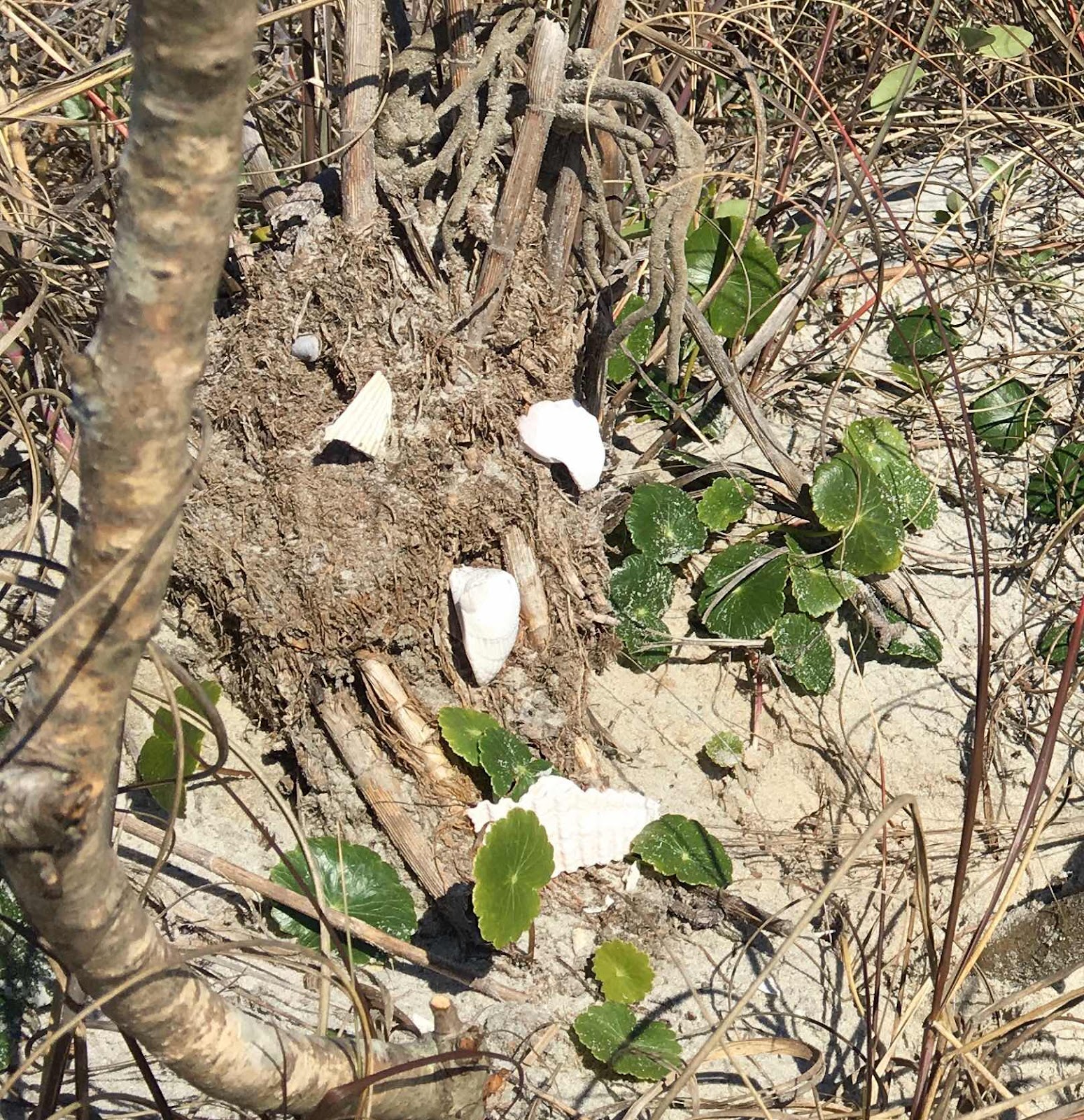 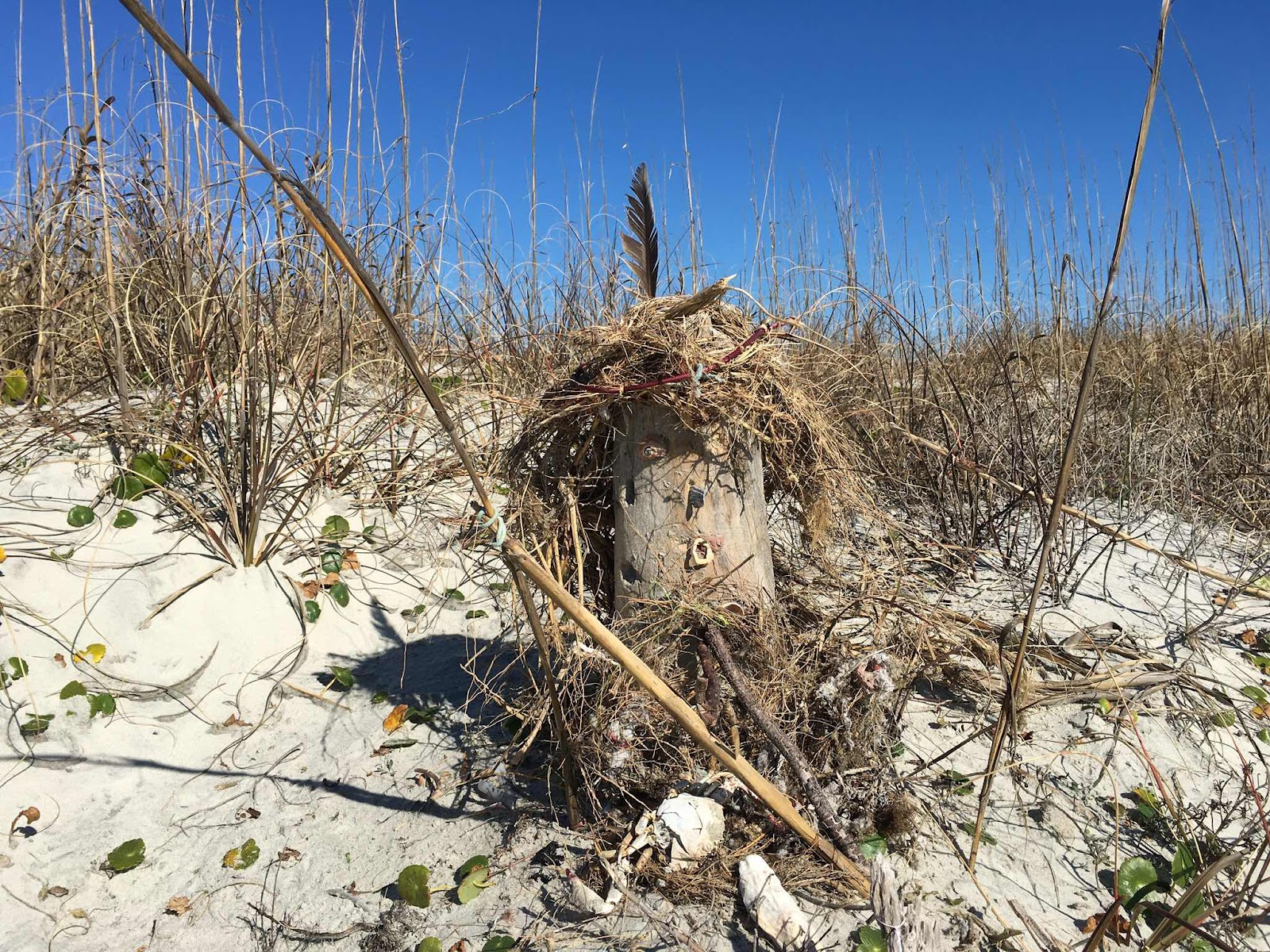 For the Good of the Hive 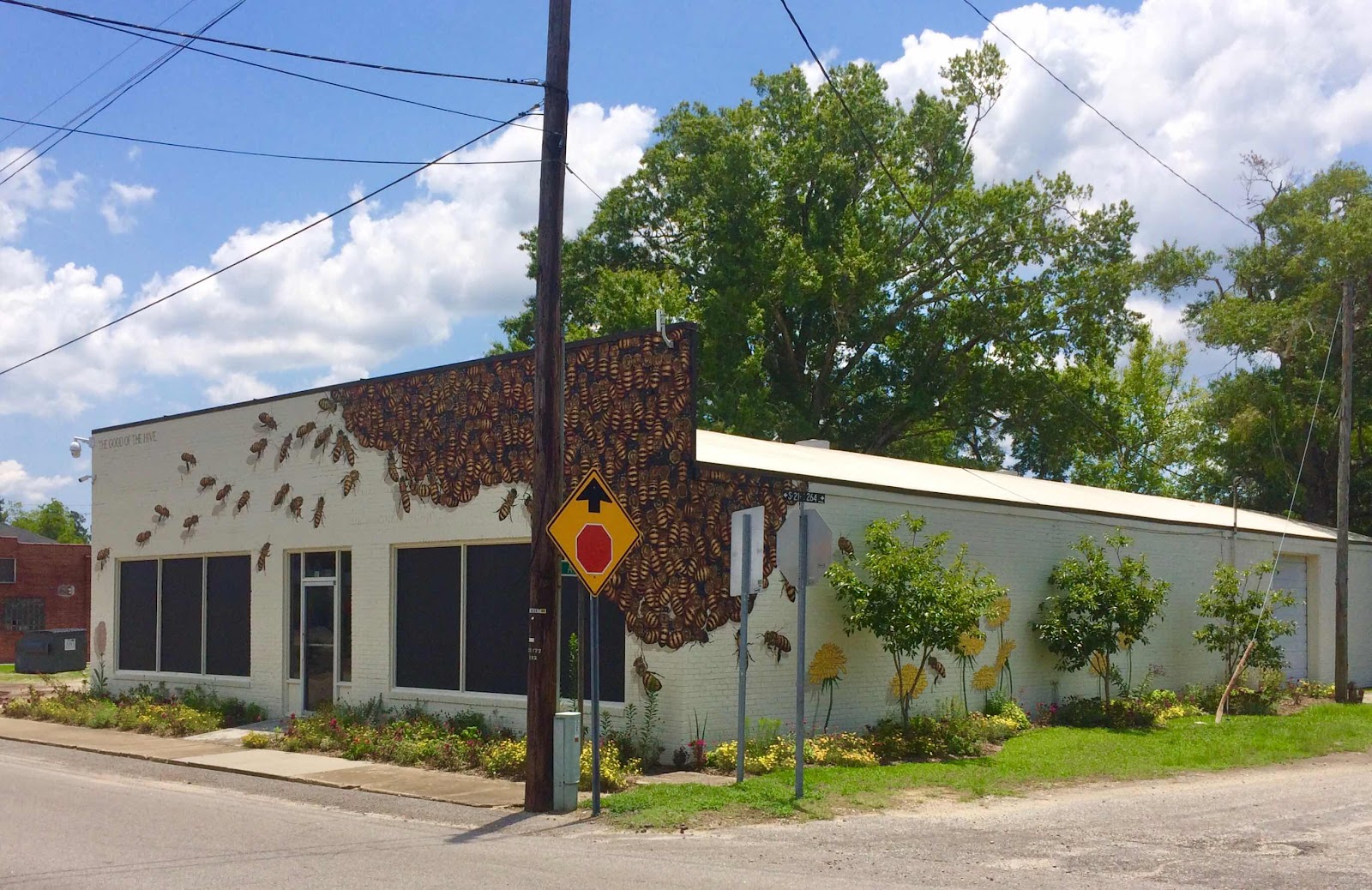 In 2015 Lake City became the first town in South Carolina to receive Bee City status.  Since then several others have followed suit, and it’s a good thing. 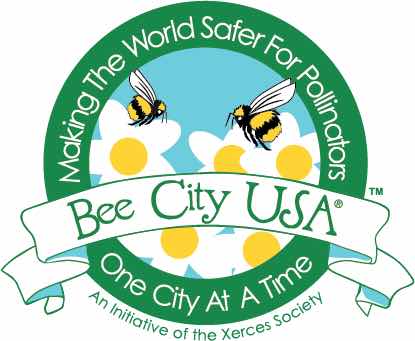 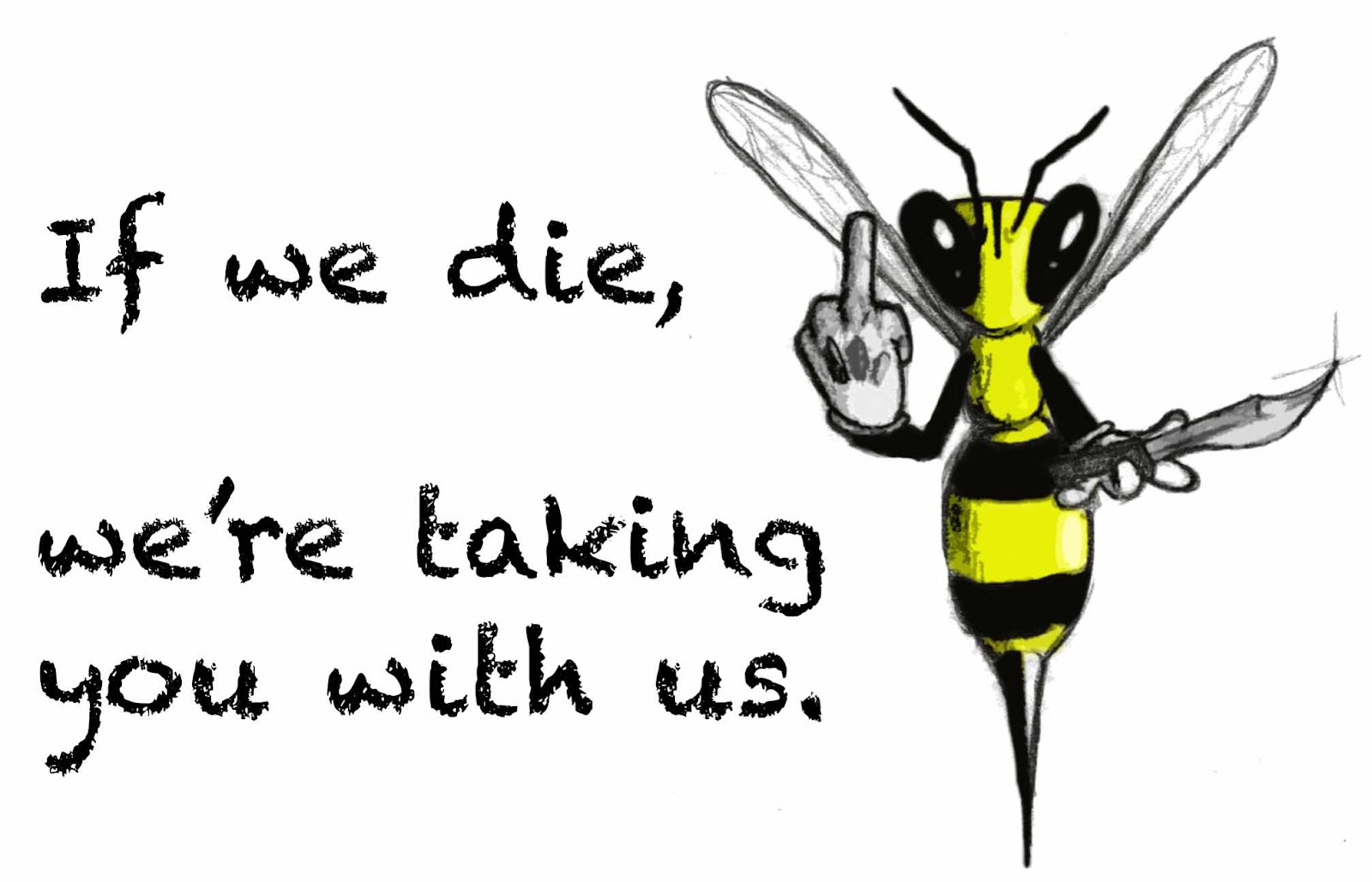 Because these little bugs need all the help they can get if the humans on this planet are going to continue to eat!
There are several factors (and still some mysteries) threatening the bees:  diseases like Colony Collapse Disorder which has affected more than half of the bee colonies in the U.S. over the last few years, the use of pesticides such as neonicotinoids on crops that kill bees, and climate change that affects the quantity and timing of flower bloom where the bees feed. 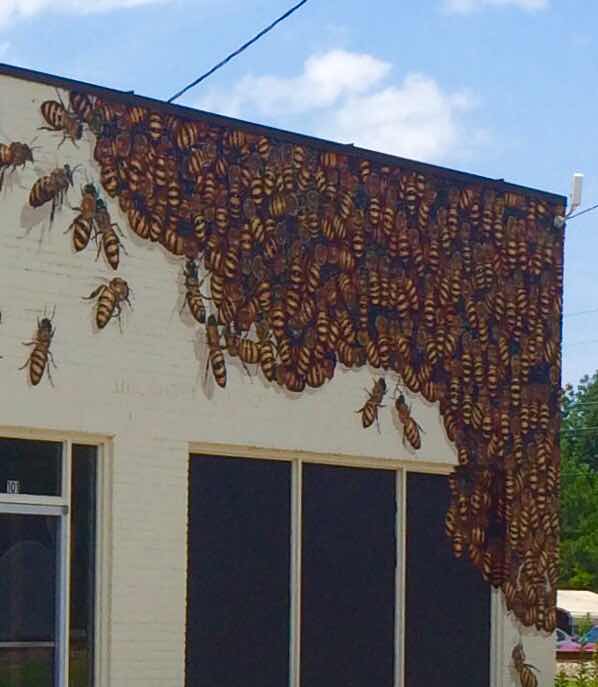 Bees are in the news again as the Trump version of the EPA (Environmental Protection Agency) continues routinely to use a so-called “emergency loophole” to allow known bee toxic pesticides to be used on millions and millions of acres of bee pollinated farm crops, flowering apple, peach, and nut trees, rice, etc., resulting in multiple lawsuits from beekeepers and food safety advocates.
Meanwhile, we eat the pesticides on our foods and the bees die. 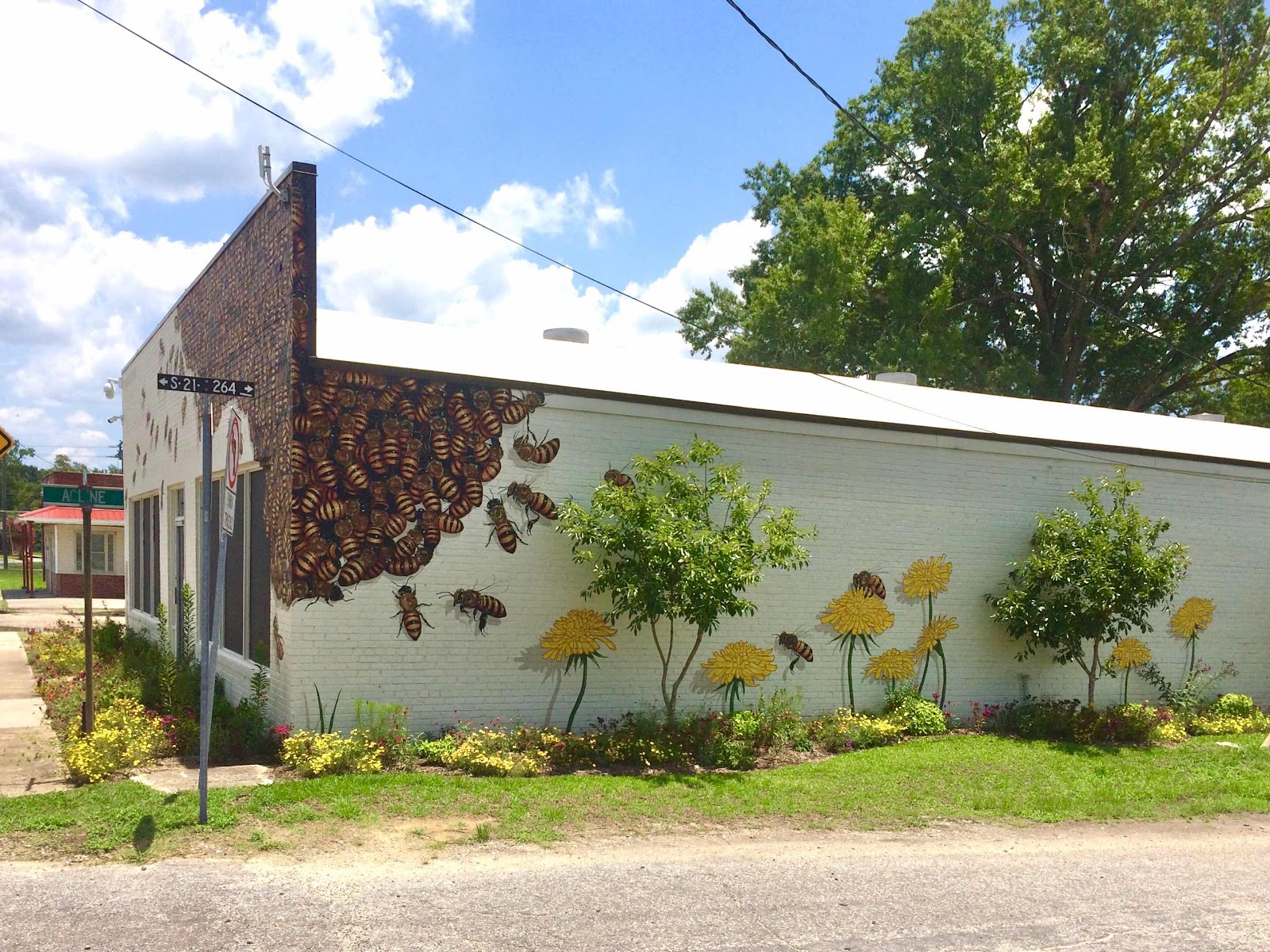 Towns like Lake City are raising awareness of the role of pollinators in the food supply, educating citizens, and building bee-friendly habitats around the town, like the fun flower garden above. 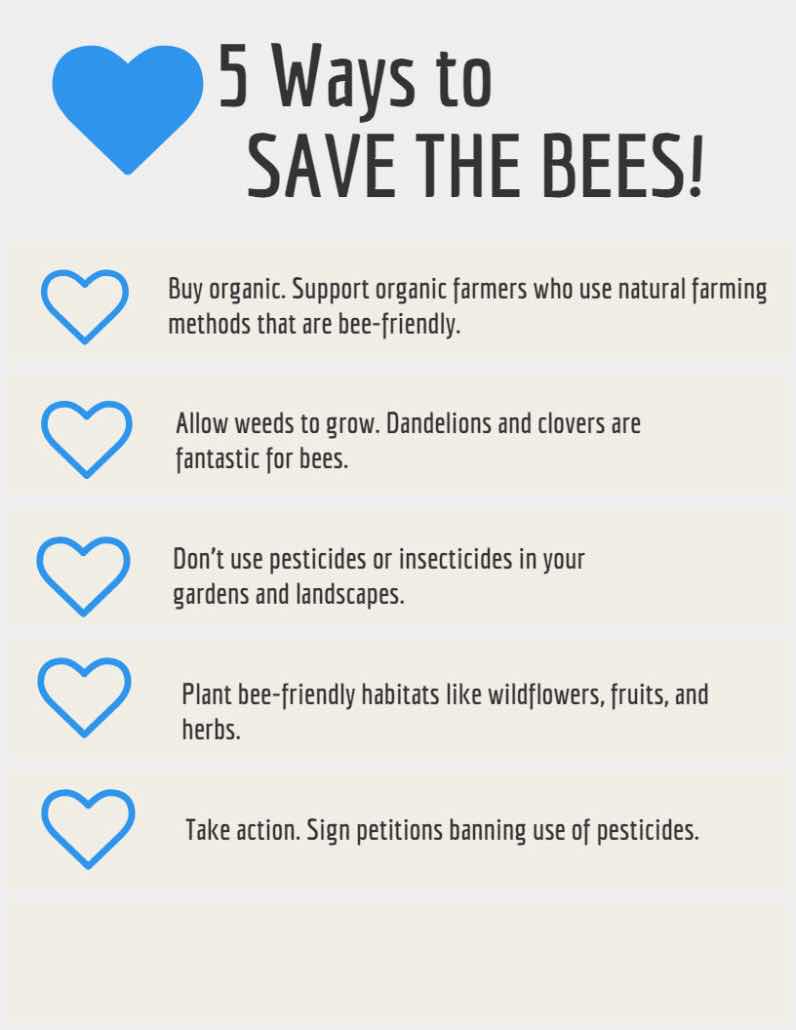 Even if, like us, you don’t live in a Bee City, here are some ways to help.
This is a worldwide problem, but here are a couple petitions you can sign if you live in the U.S.
https://www.change.org/p/ban-the-chemical-that-s-killing-our-bees
https://addup.sierraclub.org/campaigns/help-save-our-bees-and-the-planet/petition 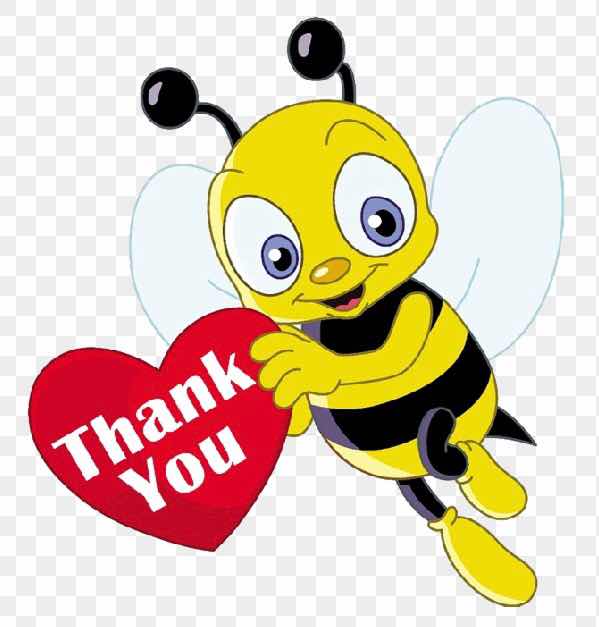 Below: a local camellia pollinator at work! 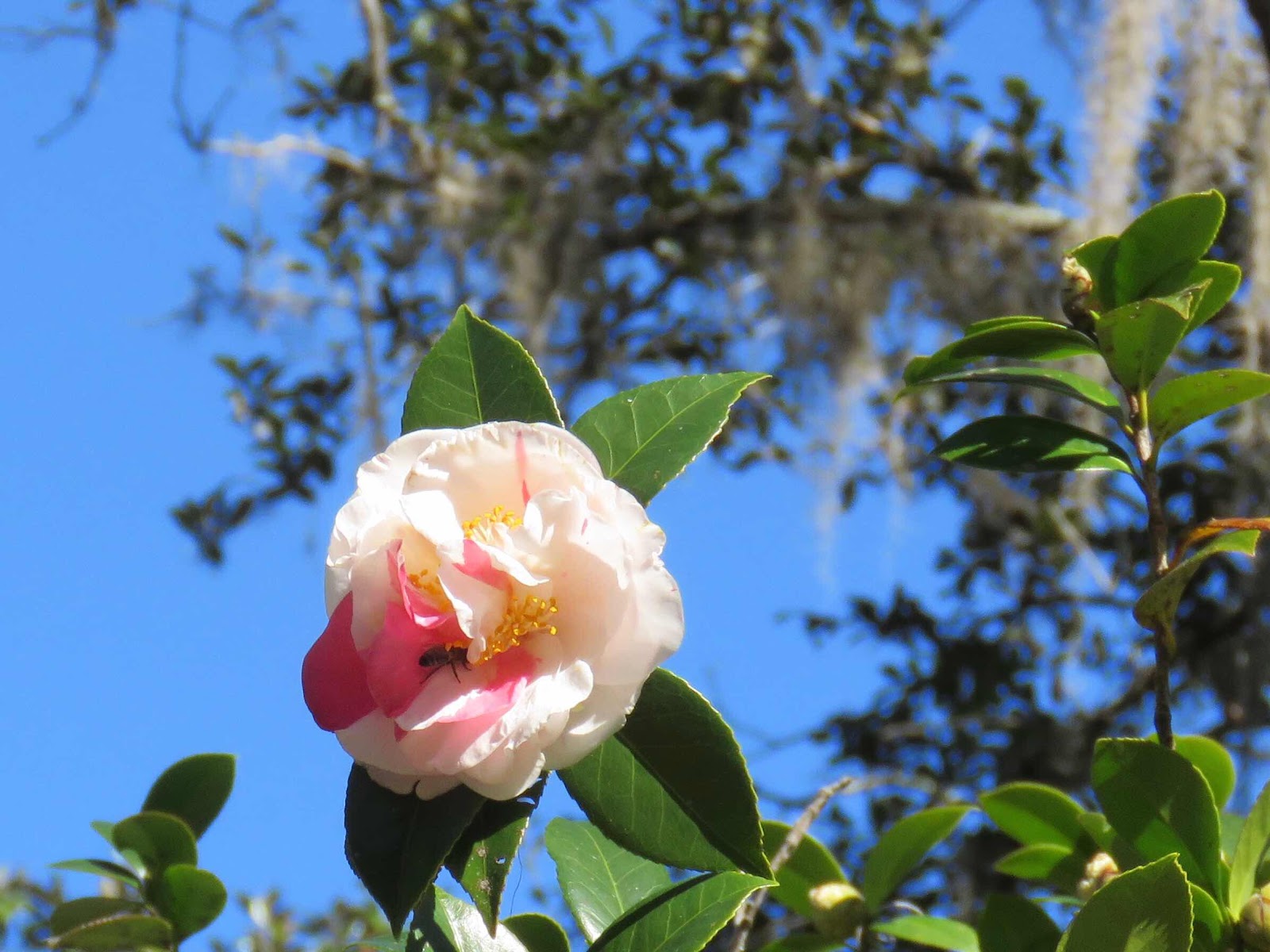