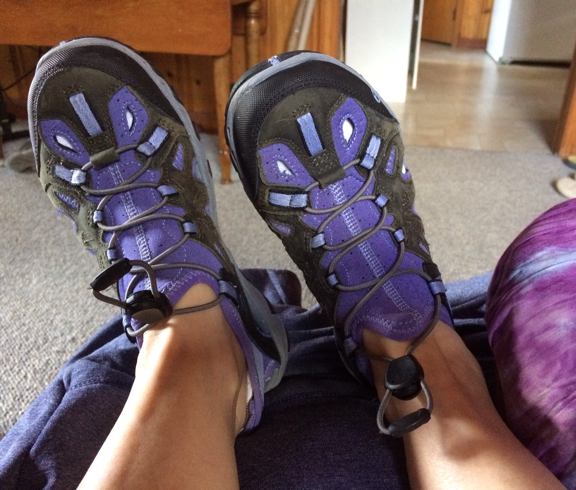 I've never had purple shoes before.  Let's just say I'm practicing!
When I am an old woman I shall wear purple
With a red hat which doesn't go, and doesn't suit me.
And I shall spend my pension on brandy and summer gloves
And satin sandals, and say we've no money for butter.
I shall sit down on the pavement when I'm tired
And gobble up samples in shops and press alarm bells
And run my stick along the public railings
And make up for the sobriety of my youth.
I shall go out in my slippers in the rain
And pick flowers in other people's gardens
And learn to spit.
You can wear terrible shirts and grow more fat
And eat three pounds of sausages at a go
Or only bread and pickle for a week
And hoard pens and pencils and beermats and things in boxes.
But now we must have clothes that keep us dry
And pay our rent and not swear in the street
And set a good example for the children.
We must have friends to dinner and read the papers.
But maybe I ought to practice a little now?
So people who know me are not too shocked and surprised
When suddenly I am old, and start to wear purple.
Jenny Joseph
Posted by Cynthia at 4:59 AM 16 comments:

We'll Travel for Miles With Our Saturday Smiles...

Remember that song?  We were singing it this morning on our way to get coffee (decaf Americano three shots please for me, coffee straight up no additions or amendments for The Writer) and shop groceries.  I'll put a link at the bottom in case you want to give it a listen.
We stopped at the postoffice and spotted a road we hadn't been down yet.  Of course, 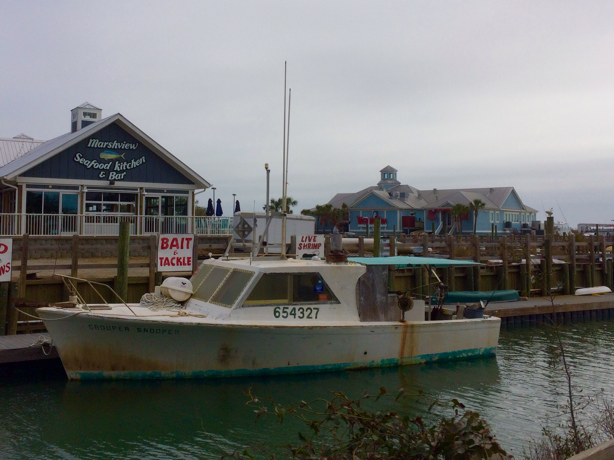 we had to explore.  At the end of it were some marinas for large boats and one for smaller fishing boats.  I liked this one.
Can you see its name?  The GROUPER SNOOPER looks like it's been around for awhile. 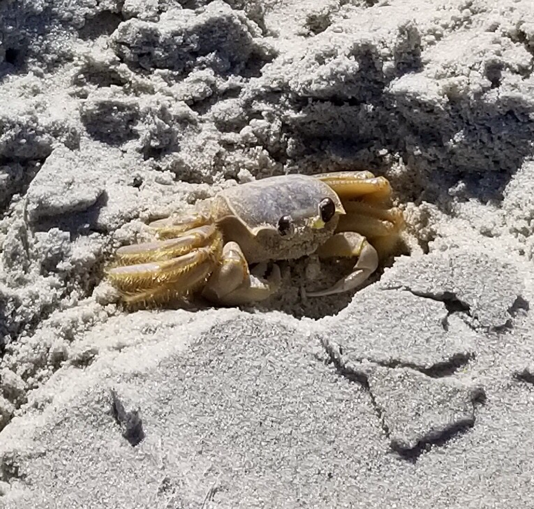 On the beach we saw the first Atlantic ghost crab since fall, a good sized one, about as big as a man's fist.
We have had a few lovely warm and sunny days to entice him out of his burrow four feet under the sand, but he was cold and moving very slowly.
If he had been warmer he wouldn't have stood still for photos!
This was a new burrow he had just started to dig. 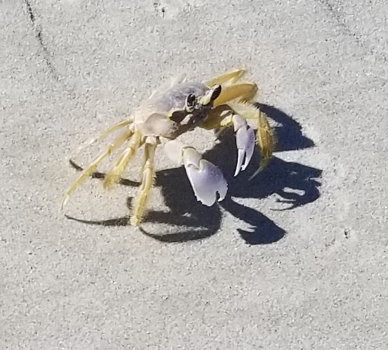 The eyes swivel to give him 360 degrees of vision! 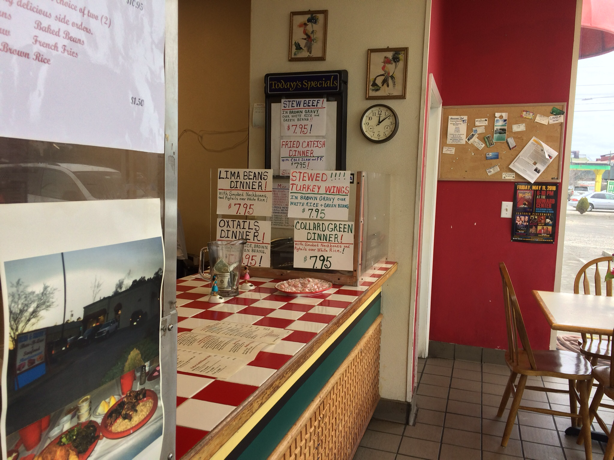 Herb's Barbecue is a good place for a Saturday lunch.  He is only open for a few hours on Fridays and Saturdays so don't get a hankering for Herb's barbecue any other time of the week.  We aren't adventurous enough to try his specials (except collard greens, I LOVE collard greens).  Anyone for smoked pigtails and neck bones with lima beans?  We stick to the basic pork barbecue with Herb's sauce and you can't beat it!
There are only two little tables and no one can get in the door to the counter if they are in use so everyone pretty much takes their plates home to eat. 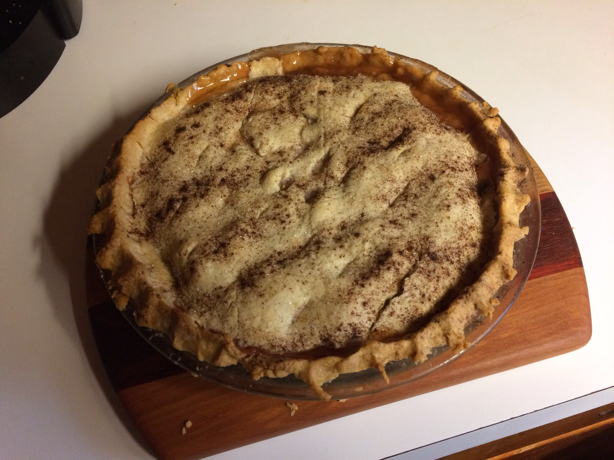 I just took The Writer's Valentine present out of the oven.  Rhubarb pie, his favorite.  My sister gave me the rhubarb and I've had it hidden away in the freezer for just such an occasion.  (We can't get rhubarb Down South.)
Here's the link to "Come Saturday Morning".  What's cookin' on your Saturday?
https://m.youtube.com/watch?v=ALcEcZ7UgRA

February is Black History Month in the U.S. so I thought I'd show you a visit to the Fort Moultrie museum and its excellent exhibit on slavery in Charleston. 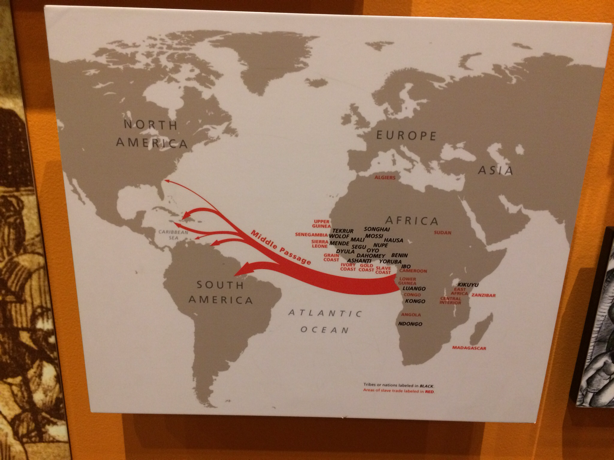 Charleston was the main port of entry in the U.S. for slaves from West Africa, with 200,000 to 360,000 men, women, and children arriving from 1707 to 1808 when their transport became illegal.
Doctors from Charleston examined the passengers for illness when they arrived.  Many were taken from the ships and away from the city to Sullivan's Island and placed in quarantine in "pest houses" where they either died or got well and were readied for sale.  In quarantine they were held the shortest time possible to maximize profit.  Sometimes a ship's captain would sneak a ship of sick people into port to avoid the cost of quarantining them. 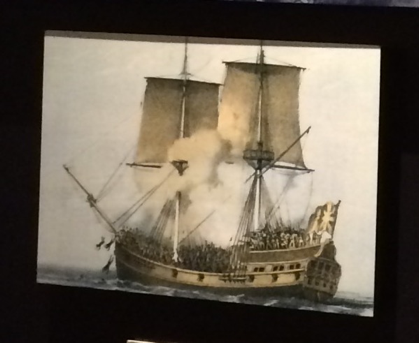 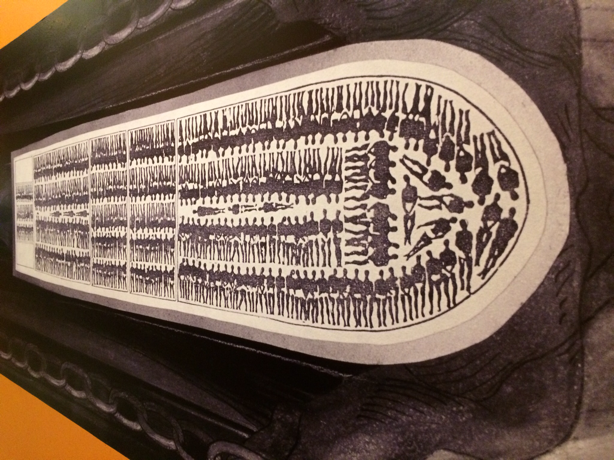 On the right is a diagram by a former slave who wrote a book about his passage from Africa.  It shows how they were shackled for the 10-week trip to get the maximum cargo aboard. 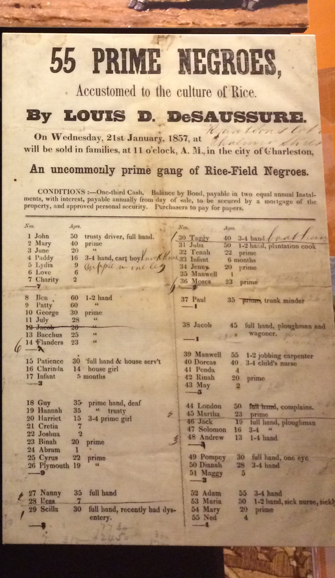 Slaves sold to plantations worked in the houses of the owners and the rice fields of South Carolina.
Slaves who remained in the city sold crops at the market, worked on the docks and in the building industry, fished, and took care of the homes and children of their owners.
Children were sold and worked the same as adults without regard for family ties. 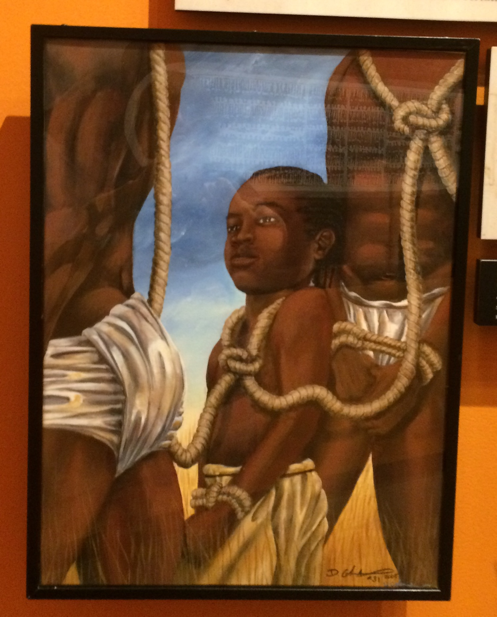 The stories of most individuals are lost for all time as slaves were recorded on the ships' logs only by their approximate age and sex.  However, one little girl on the register of The Hare,10 years old, was sold to Elias Ball II, a rice planter near Charleston.  He paid about $100 for her and called her Priscilla. 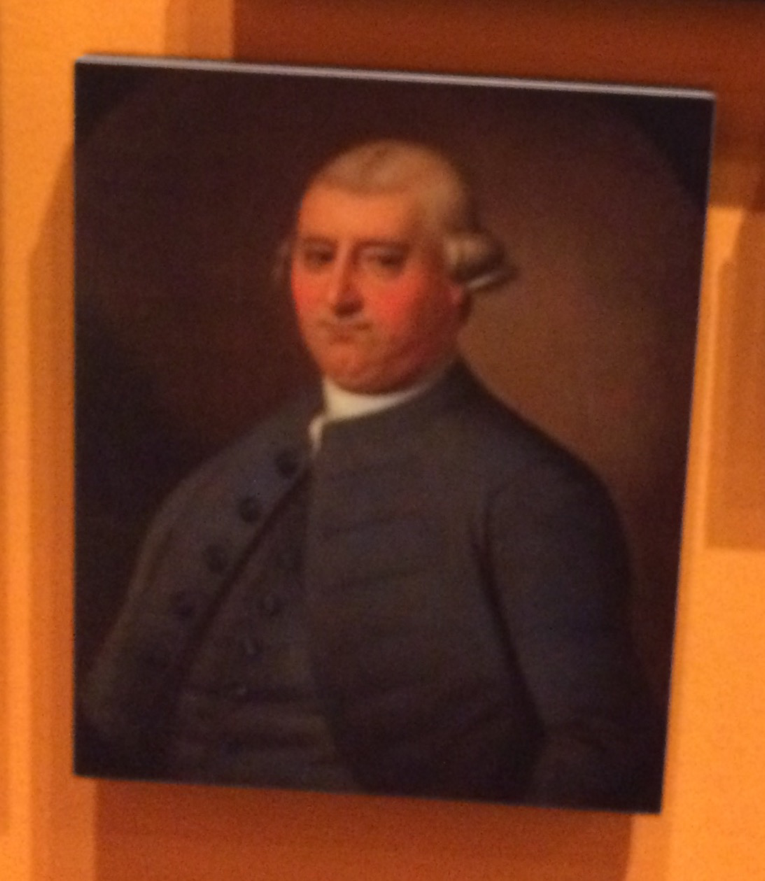 Priscilla's ancestors have traced her descendants from Sierra Leone to the present.  Two and a half centuries after Priscilla was taken from her home in Sierra Leone, a descendant, Charleston teacher Thomalind Pride, traveled with her husband to Freetown to meet her relatives.
She was welcomed with open arms. 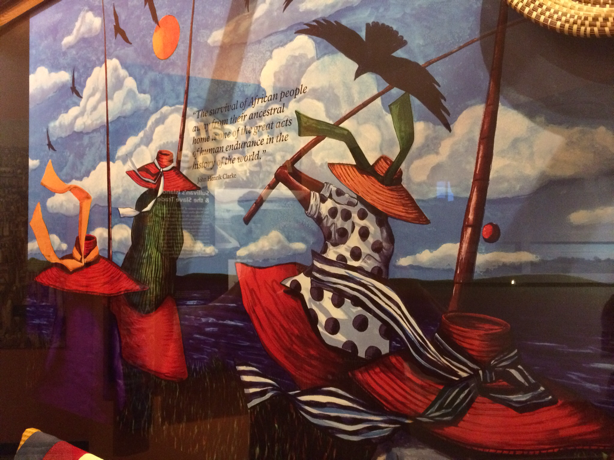 This Jonathan Green painting concluded the exhibit.  It says:
"The survival of African people away from their ancestral home is
one of the great acts of human endurance
in the history of the world."
--John Henrik Clarke
Posted by Cynthia at 11:12 AM 16 comments:

This Morning, Before the Storm 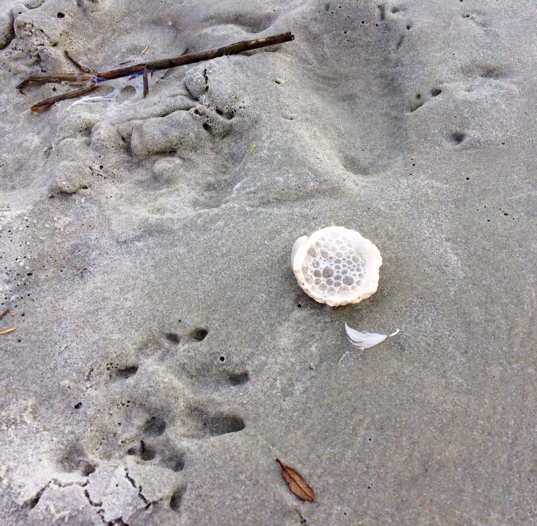 I go down to the edge of the sea.
How everything shines in the morning light!
The cusp of the whelk,
the broken cupboard of the clam,
the opened, blue mussels, 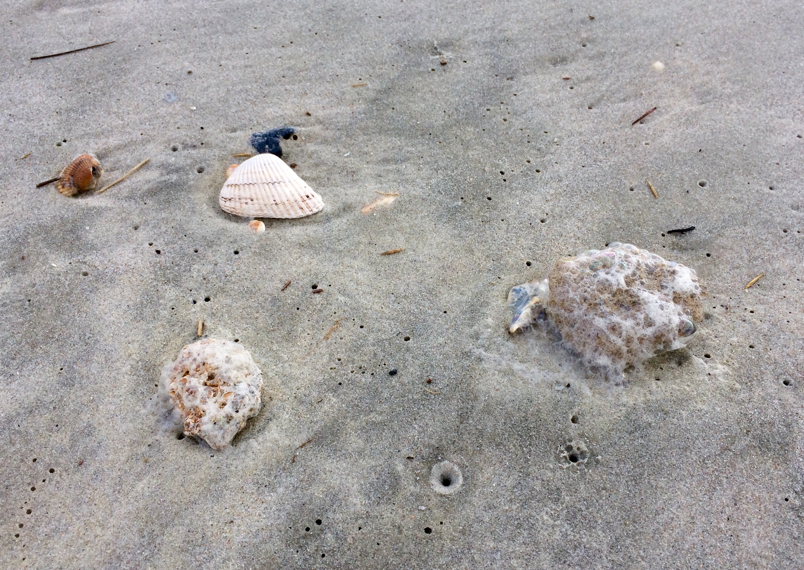 moon snails, pale pink and barnacle scarred—
and nothing at all whole or shut, but tattered, split,
dropped by the gulls onto the gray rocks
and all the moisture gone.
It's like a schoolhouse
of little words,
thousands of words.
First you figure out what each one means by itself,
the jingle, the periwinkle, the scallop
full of moonlight. 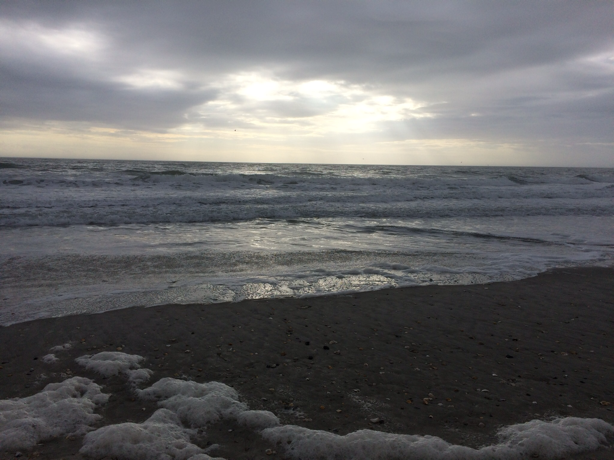 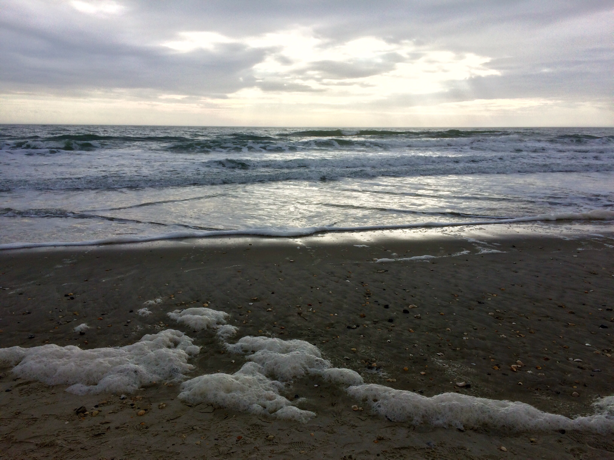 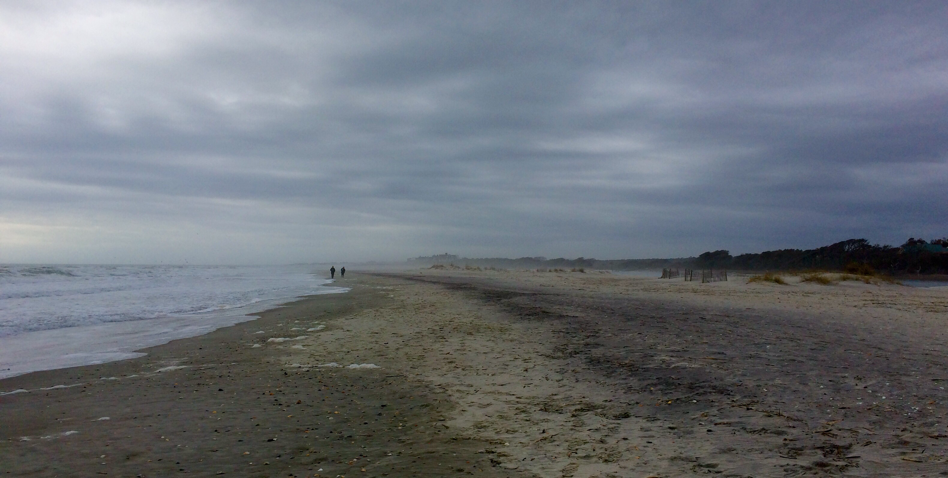 To read the whole story.
-- Breakage by Mary Oliver
〰〰〰〰〰〰〰
Last fall I discovered a small rock that had been painted by an elementary school child and placed for someone to find.  I liked the idea so much I decided to paint some myself and put one out once in awhile on our beach and see what happened. 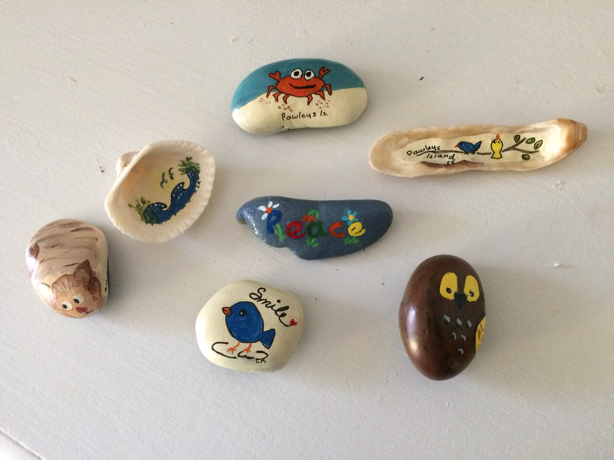 The ones I have placed so far are gone the next day so I assume that someone enjoyed finding a little something to take home, a reminder of a beautiful day spent at the beach. 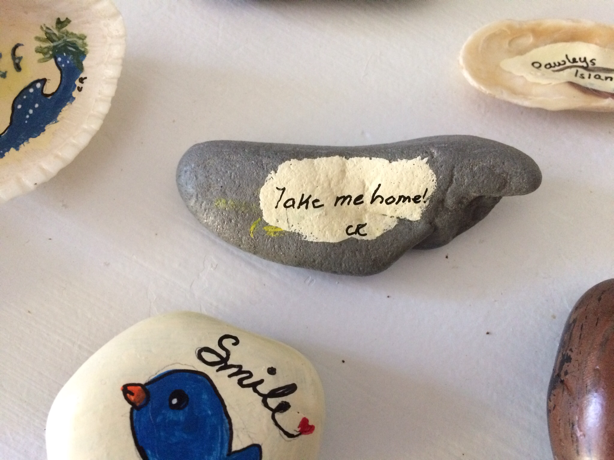 This morning I was out walking to collect more rocks to paint.  I like thinking of the finders and I like painting so I think I will continue this little project.
Posted by Cynthia at 11:44 AM 22 comments: