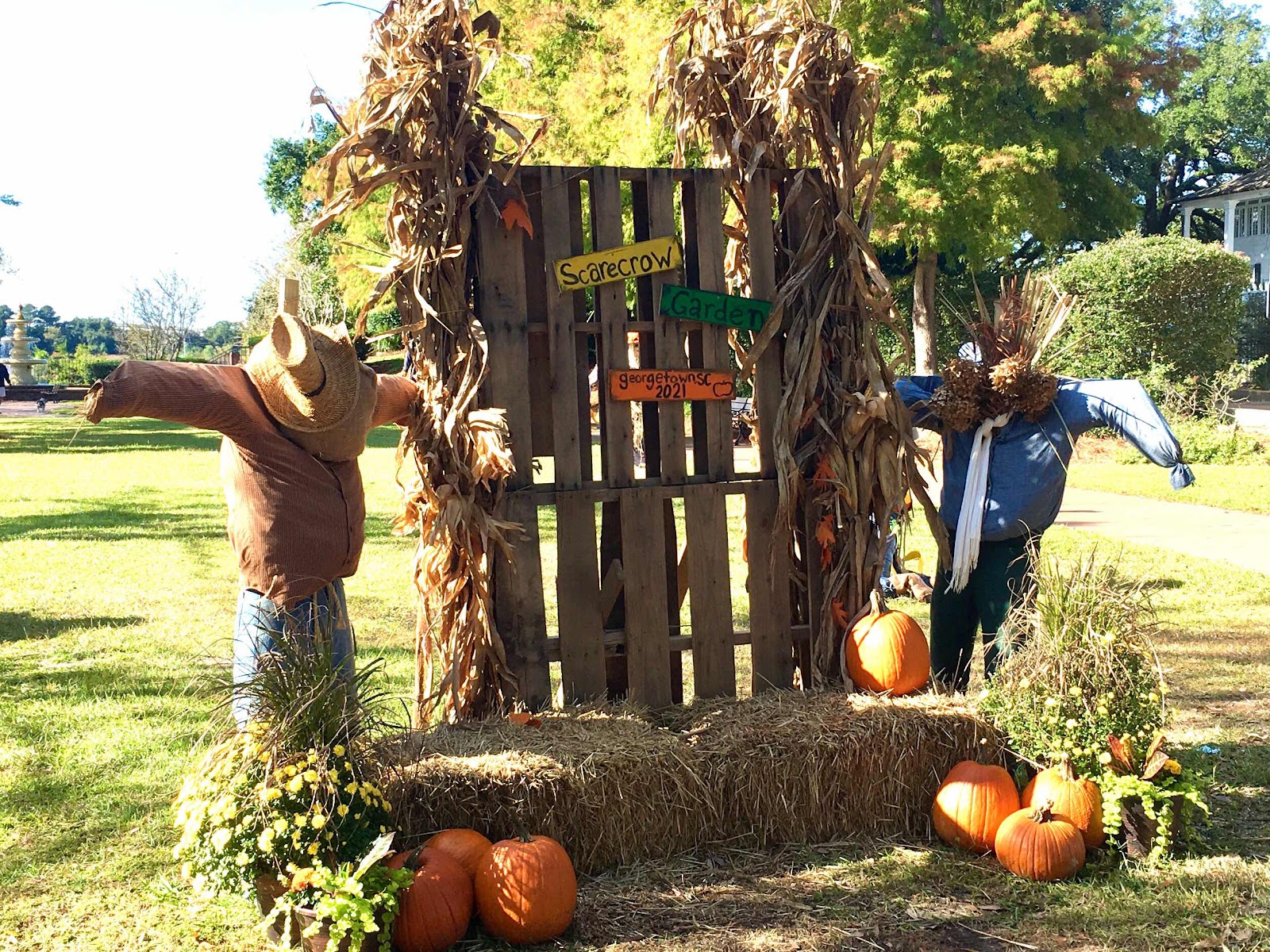 Our small town had a scarecrow decorating contest for Halloween this year. Here are a few of my favorites. 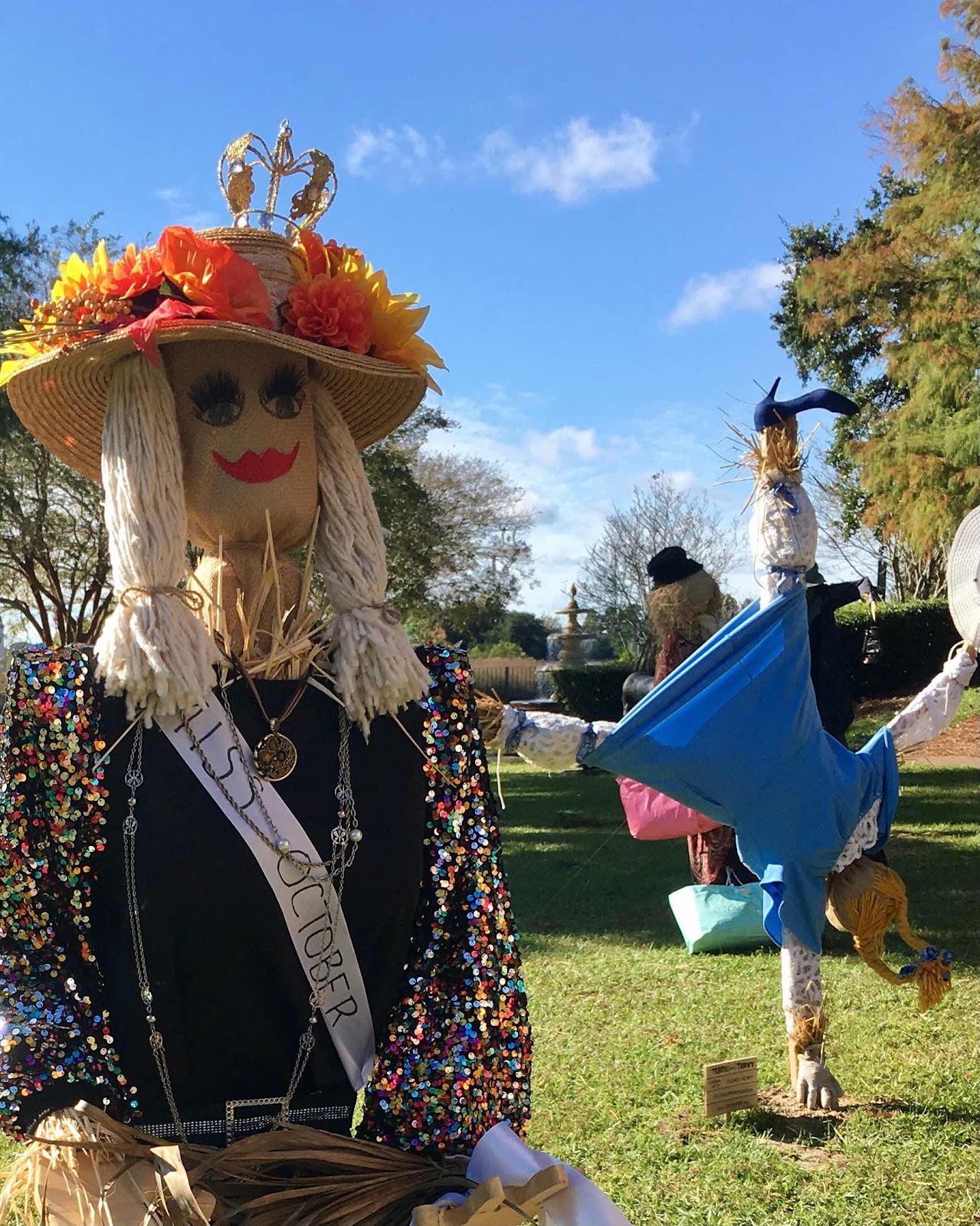 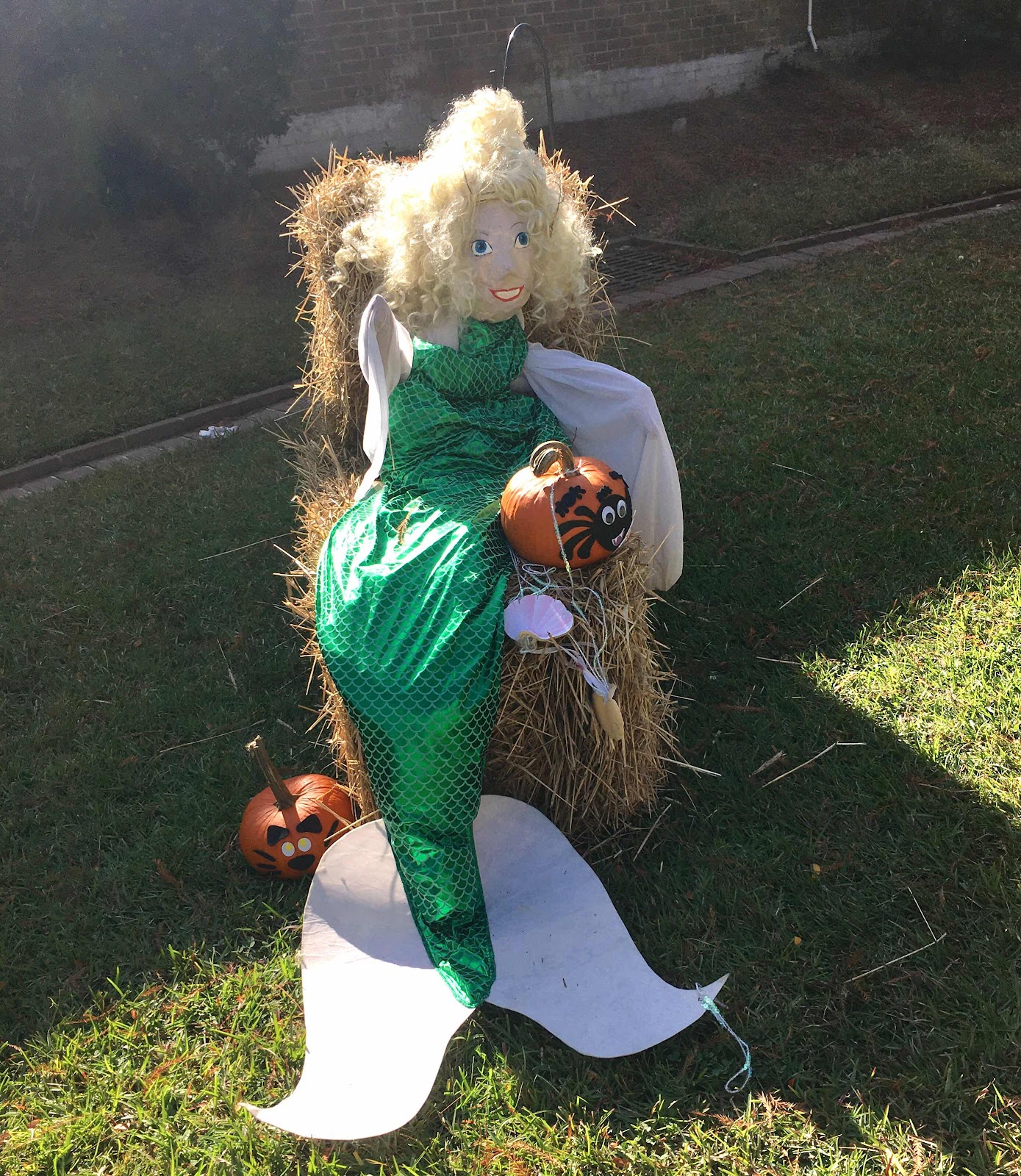 A mermaid scarecrow? Of course! We live on the coast so why not a mermaid? 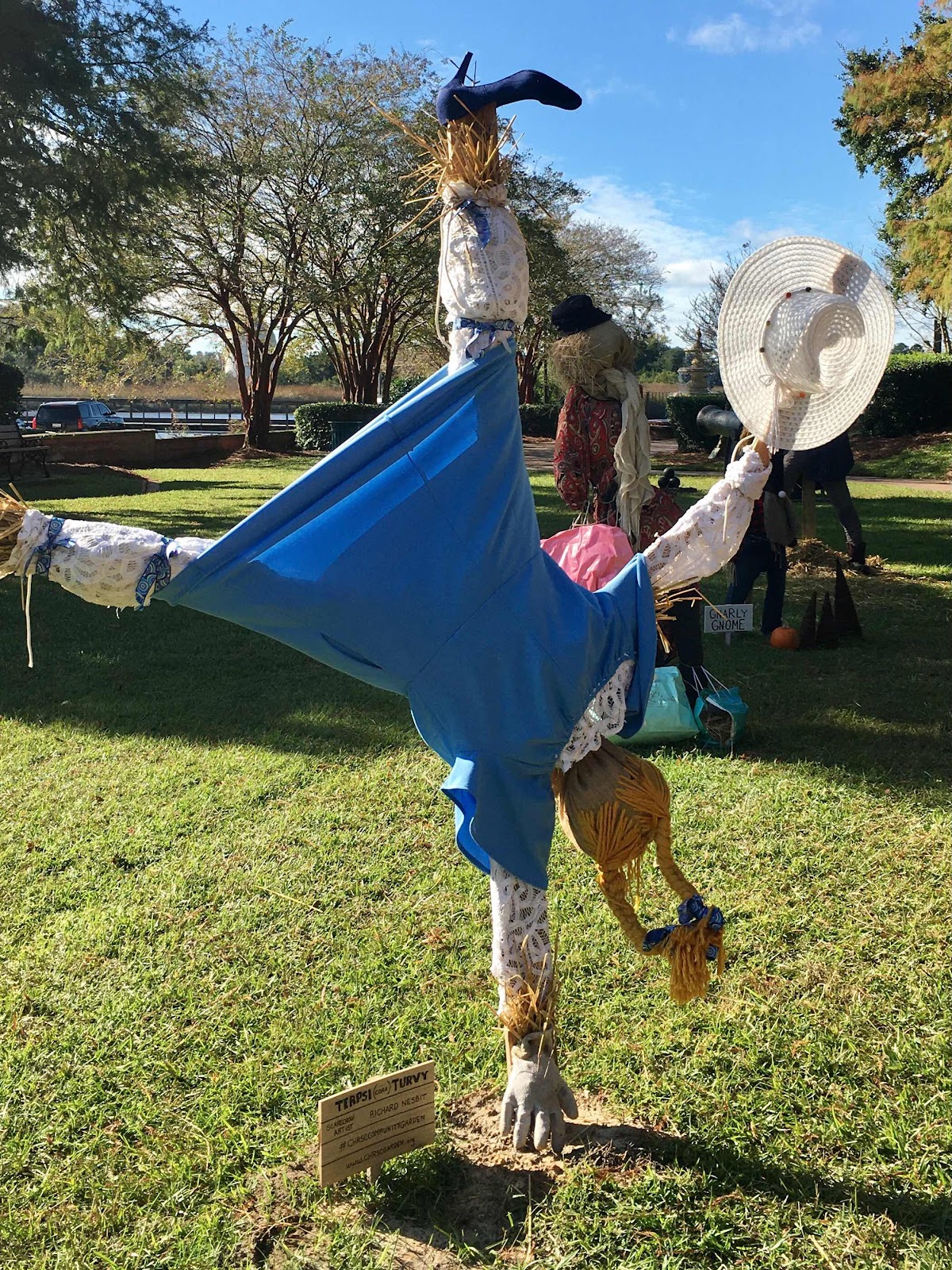 Not sure what Terpsi Turvy means but I like her! 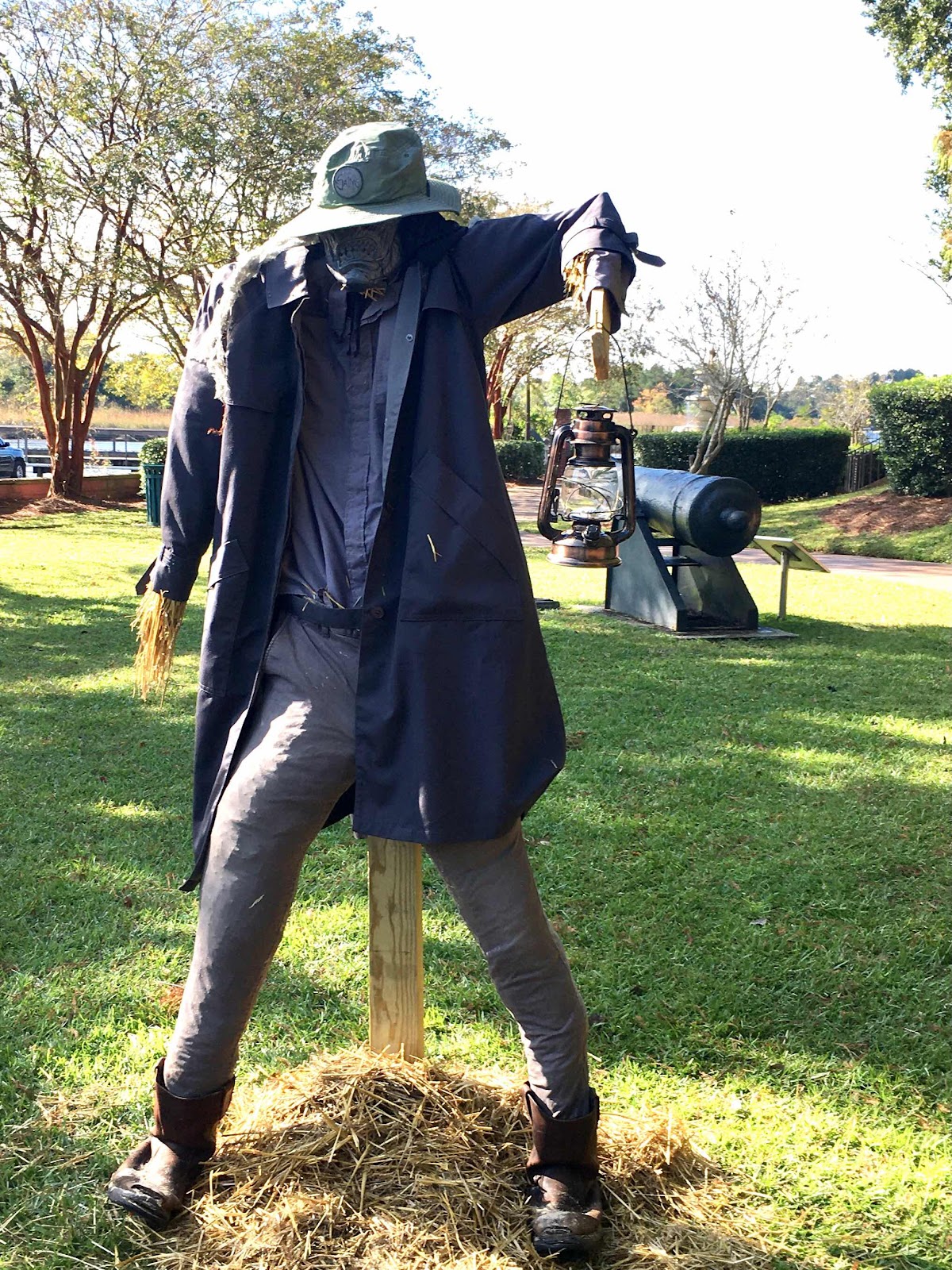 And my favorite scarecrow — the Gray Man, ghost of Pawleys Island who has been frightening residents of the coast and warning them of impending hurricanes for two centuries.
Here’s the spooky story, just in time for Halloween.
In 1822 a young man traveled by ship from Charleston to Georgetown to see his fiancée on Pawleys Island. From Georgetown, he continued to the island on horseback. To his dismay (I’m sure ‘twas a dark and stormy night!)  he and his horse became stuck in the pluff mud and tragically died, leaving his bereft love waiting forever on the island.
Since that night a lean young man dressed all in gray and carrying a lantern has walked the beaches, swinging his dim light and moaning for the love he left behind. Gray Man appears to residents of the island before hurricanes, warning them to leave the island. If they take heed, they say their house is always the one left standing when all others are blown to bits.
Lots of people in town and on the island will tell you their stories of sighting the Gray Man walking the beach on stormy nights, especially just before each of our major hurricanes.
All these scarecrows must have been effective because we did not see one crow in the park!
Happy Halloween! 🎃
Posted by Cynthia at 10:28 AM 6 comments:

October has been quite a month for us with medical issues (ours and extended families’) that have not been fun. I will spare you details except to say my 94 year old mom who lives in Florida fell while we happened to be there with her. She is still in the hospital after a week but after some time in rehab is expected to make a full recovery.
Some happy news is, after two whole years (thanks to Covid) we were finally able to see one of my daughters and her family from Minnesota! Unfortunately Mom fell the day they arrived but we still got to spend a few hours with them. It was so wonderful to be able to hug them and talk to them all in person, I still get teary just thinking about it! 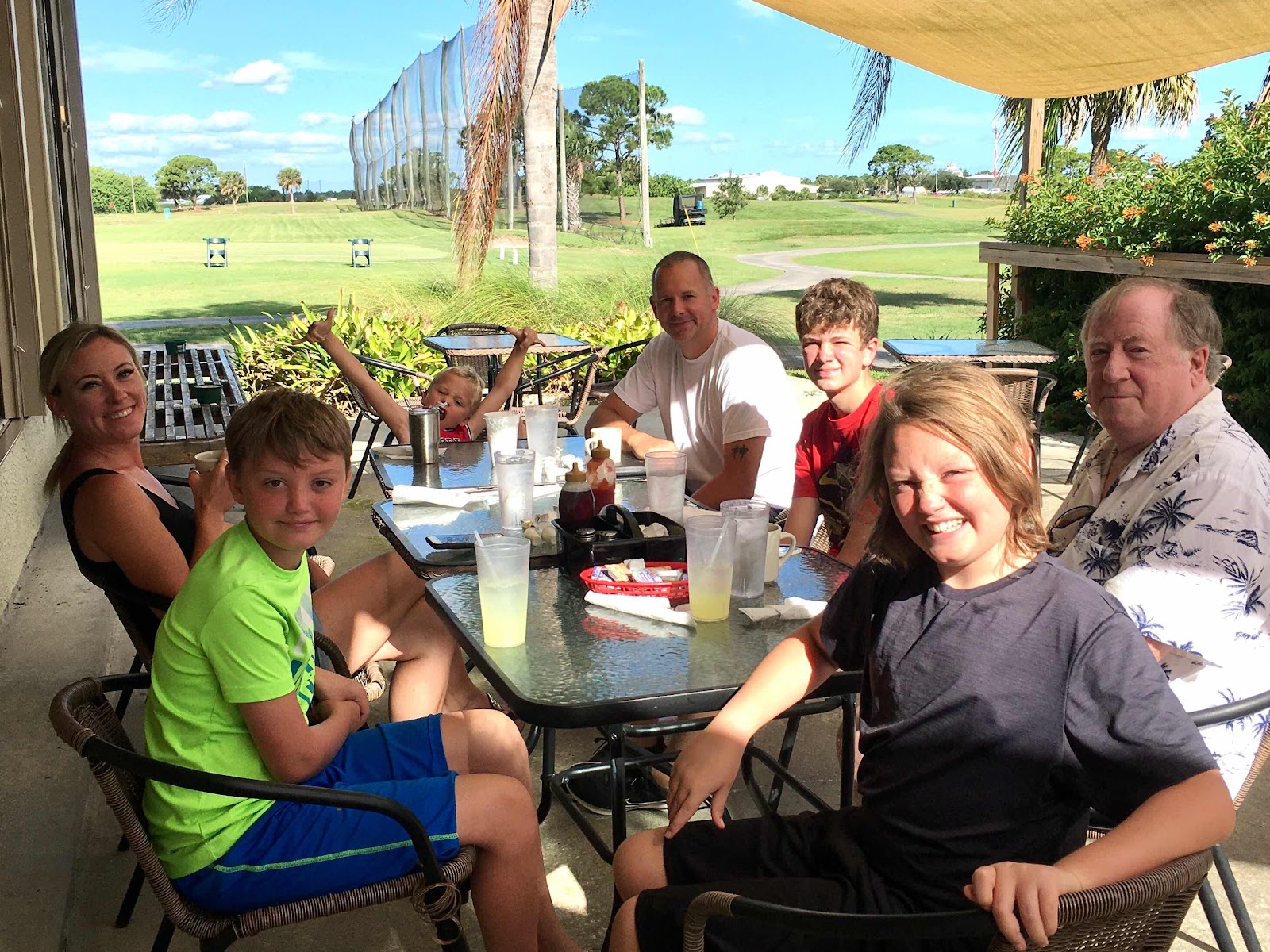 Last breakfast before they left for the Everglades, and back to Minnesota 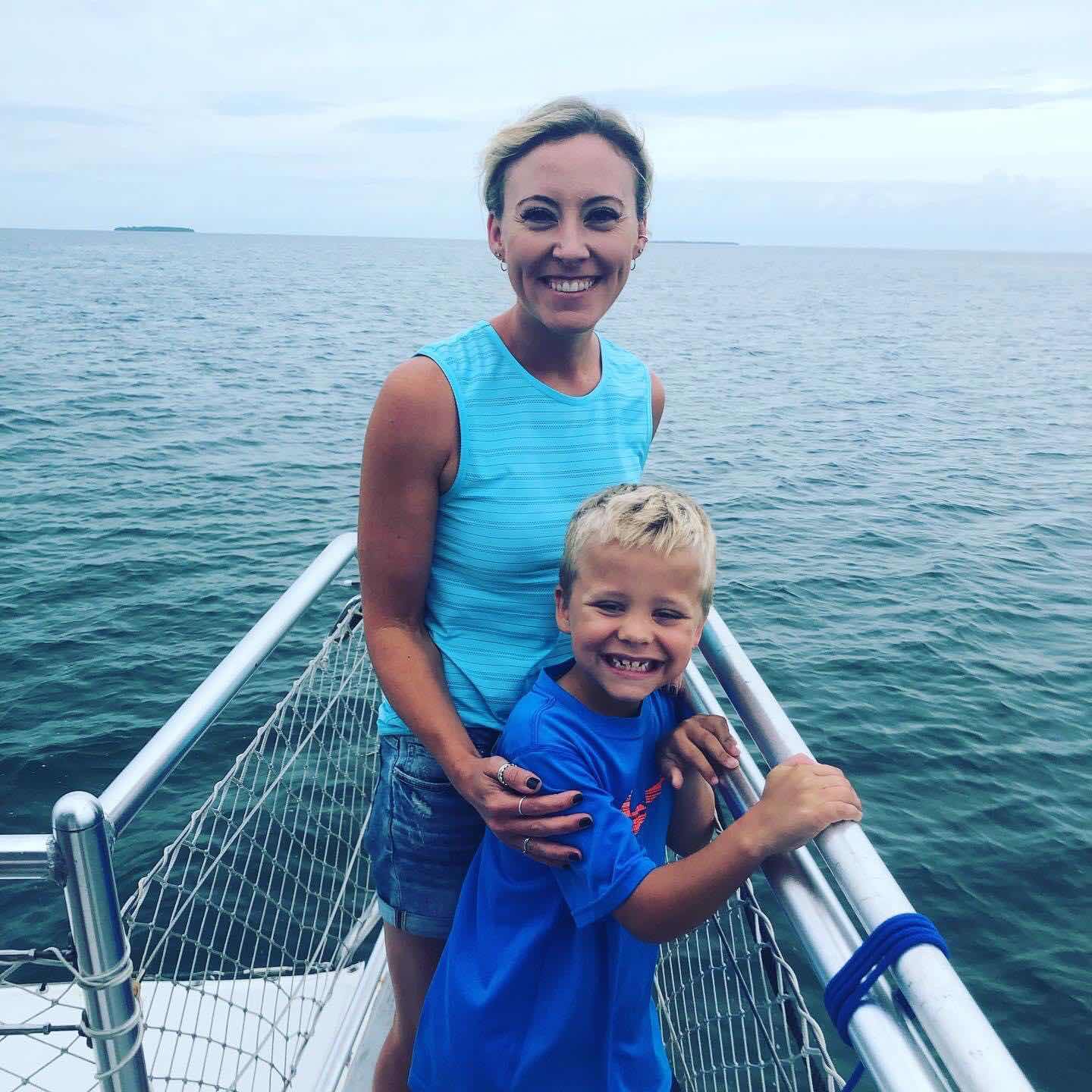 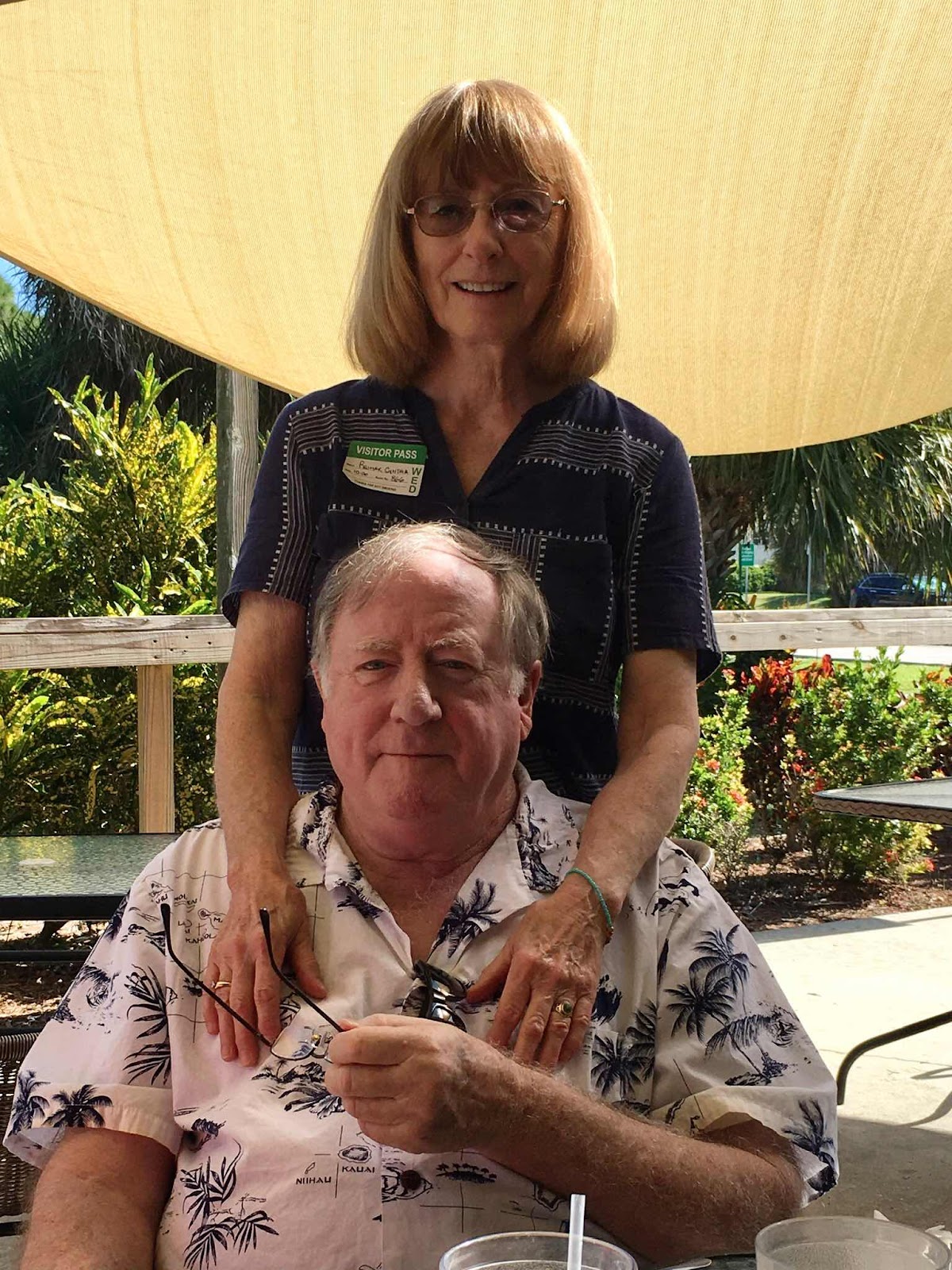 I’ll be back to reading your blogs this week and catching up on all the news.
Posted by Cynthia at 7:59 AM No comments: 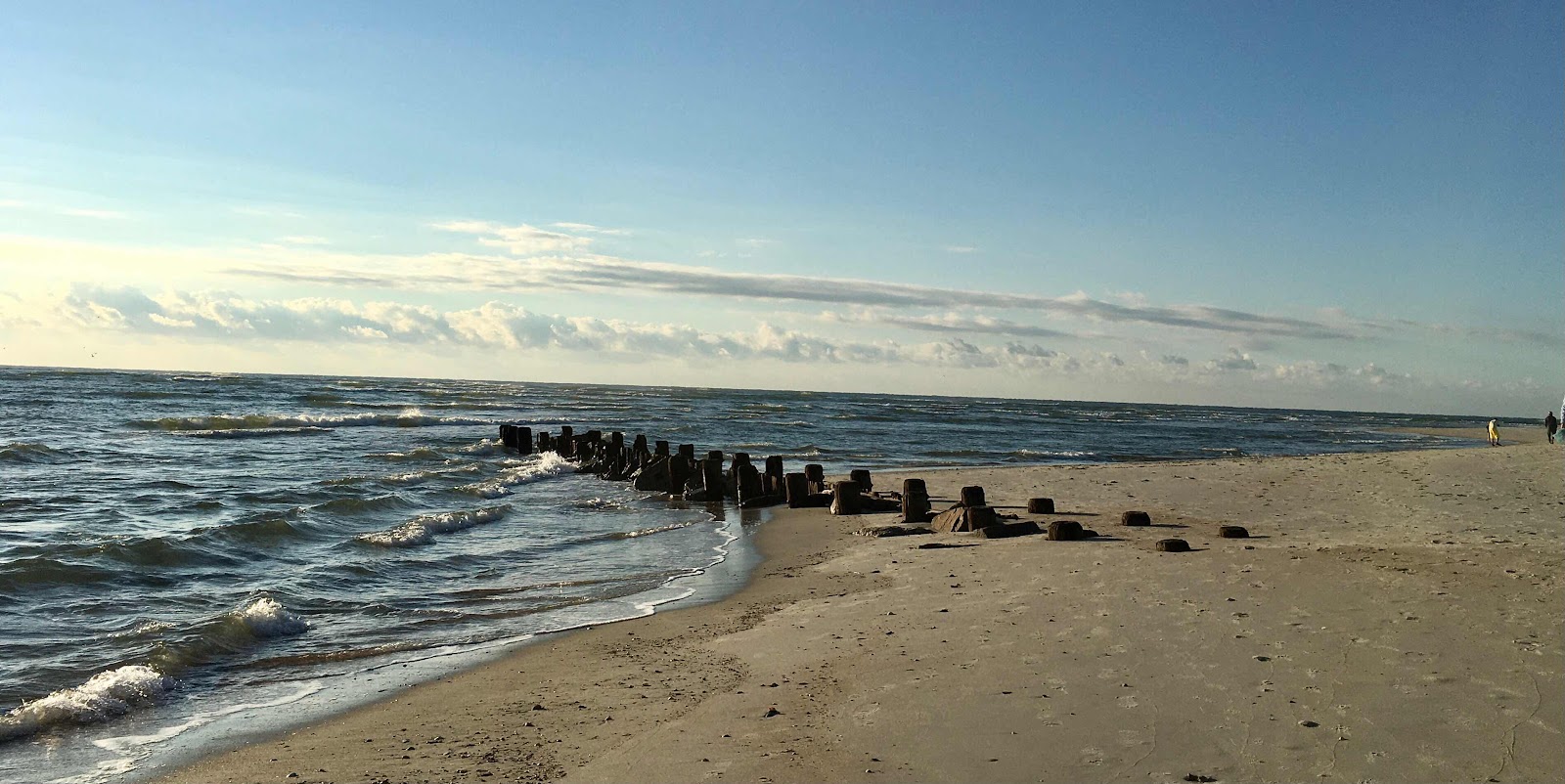 The October beach begins to reveal its wilder side while the slightly cooler air still feels soft as summer. The children have gone off to get their education and the beach is left to the dog walkers, sand joggers, shell pickers, migrating birds. 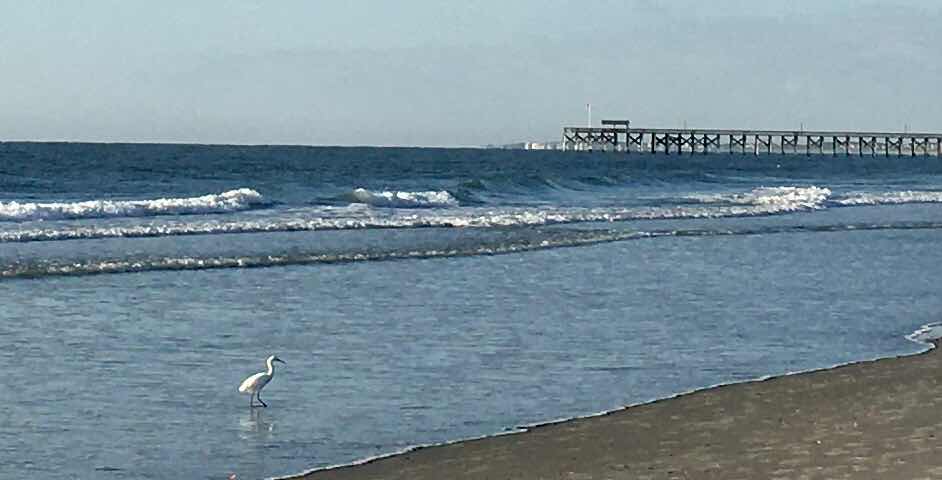 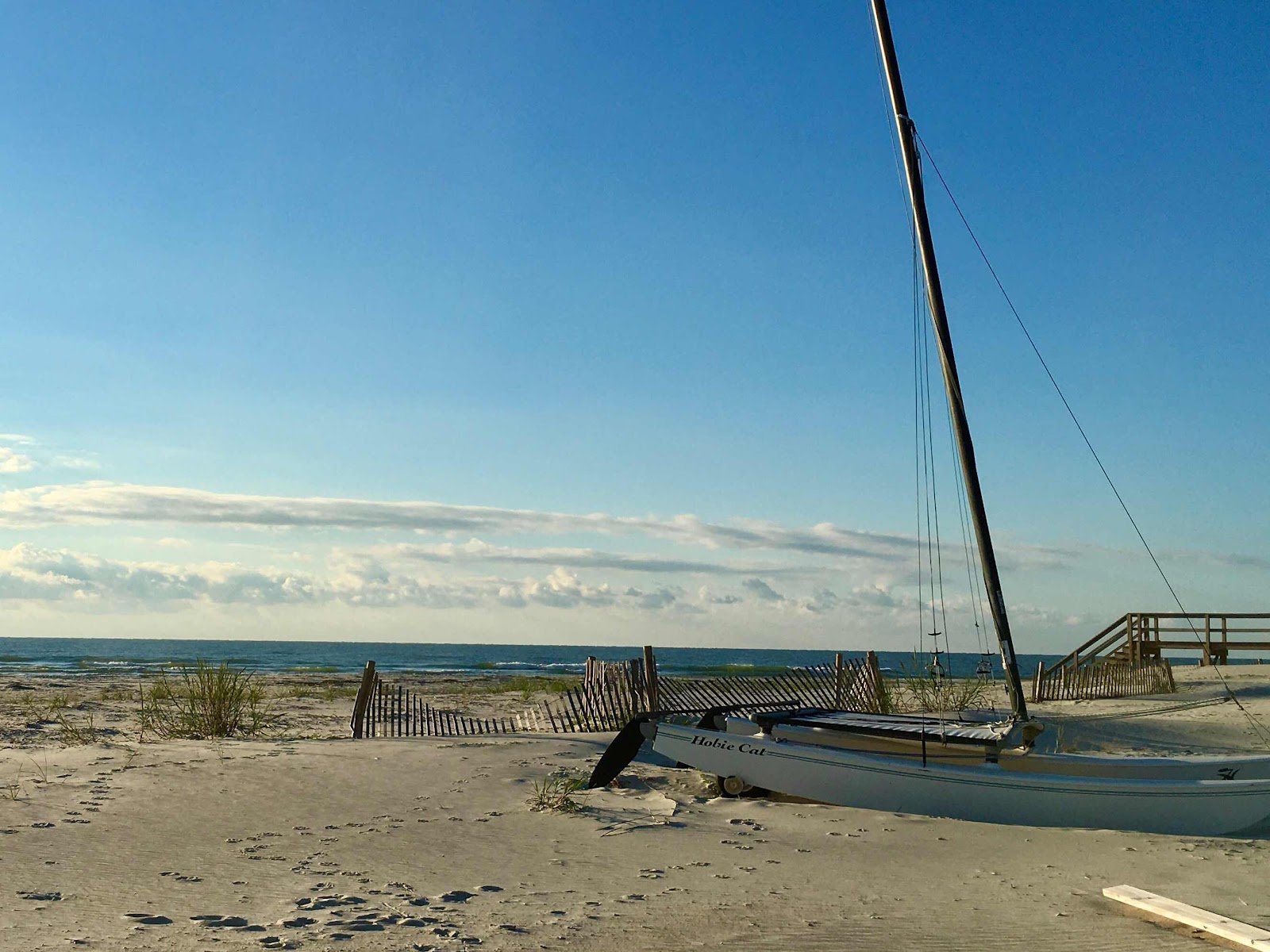 Sand pails and bright beach umbrellas are gone but all the toys are not put away quite yet.
Sailboats await the weekenders returning from the cities, seeking to relax and squeeze a bit more beach time out of the waning year.

No red and golden leaf displays yet to wow us here, but still
Nature lavishes color upon us  … 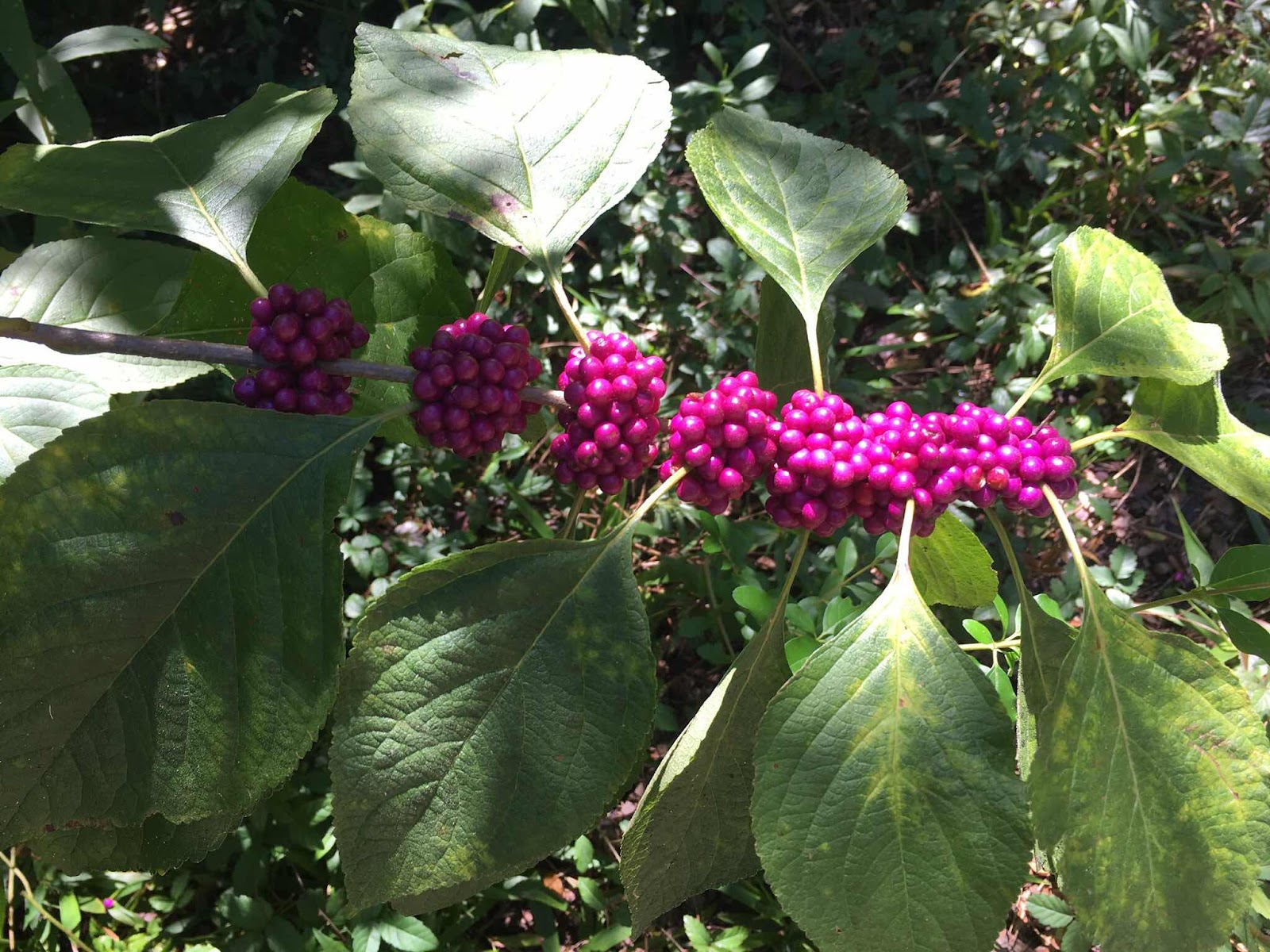 Splashes of royal purple,
beauty berry bushes
fairly glow
along the trail
to the beach. 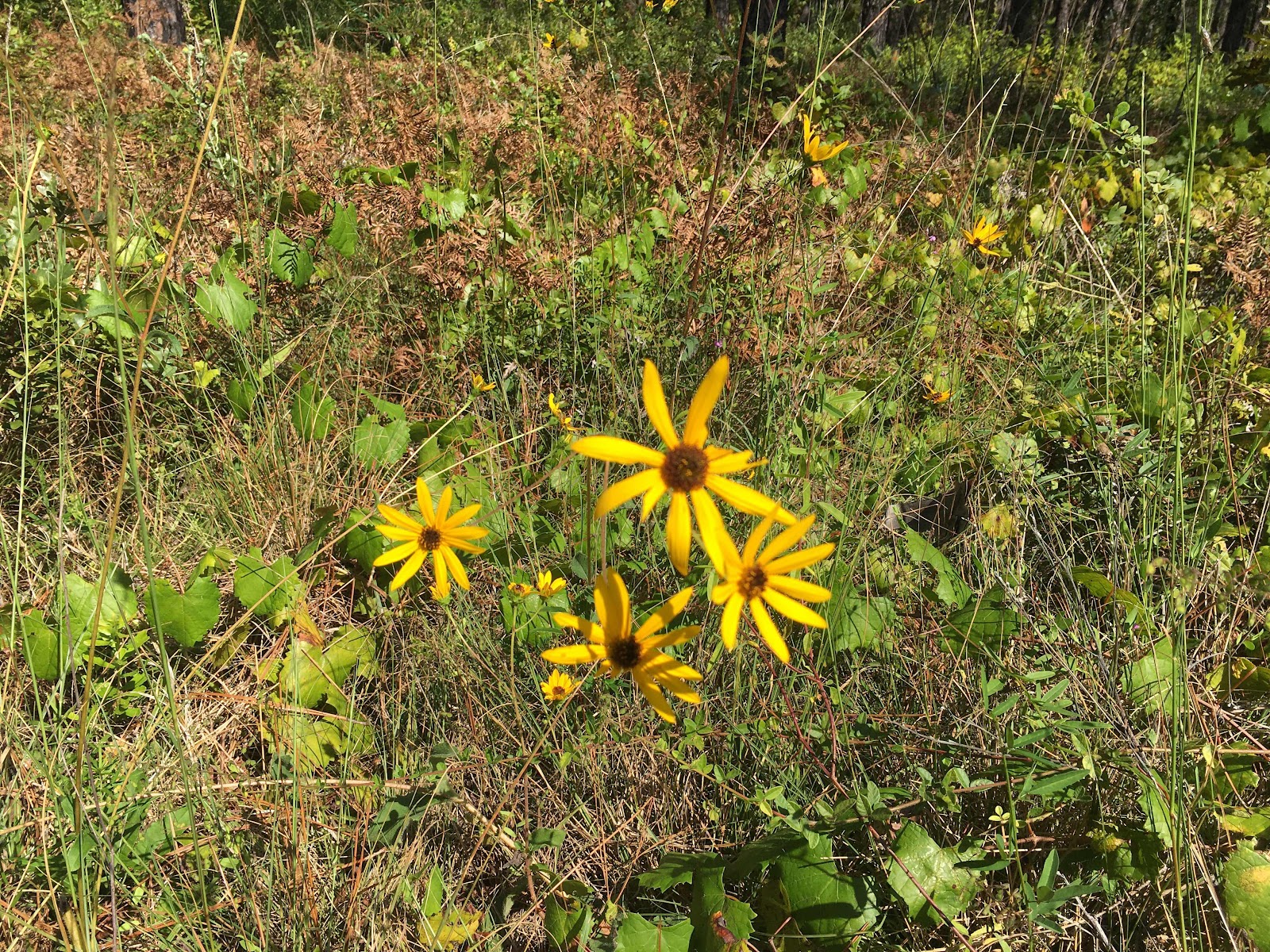 Bright and sunny brown-eyed Susans and morning glories crouch among the dune grasses. 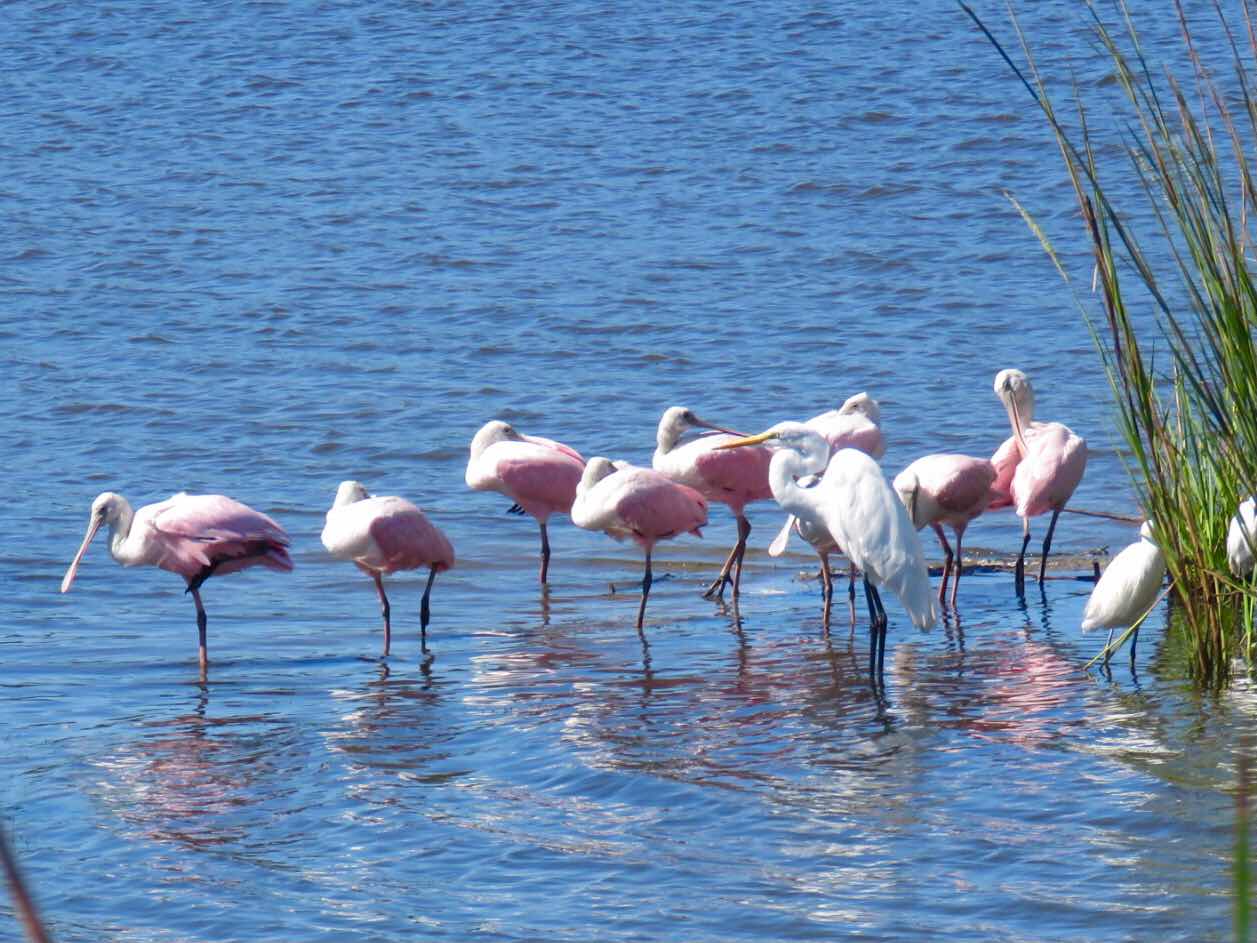 And perhaps the most shocking fall color of all … pink!  the color of Roseate spoonbills.
A group of this year’s young spoonbills feast on seafood on the tidal flats, then rest on one leg to digest their brunch. Egrets, both Great and Snowy, share their spot, all reflected in the blues of the clear October sky.
My Northerner’s heart loves and craves the oranges and golds, the yellows and greens, of a cooler autumn while still enjoying a very different but beautiful one here in coastal South Carolina.
Posted by Cynthia at 8:11 AM No comments: