An Independence Day I Could Get Excited About

Tomorrow the long Independence Day holiday weekend starts in the U.S. I’d like to share some thoughts as this day of red, white, and blue, family picnics, parades, flags, and fireworks approaches.
First, some images from an art exhibit we attended. 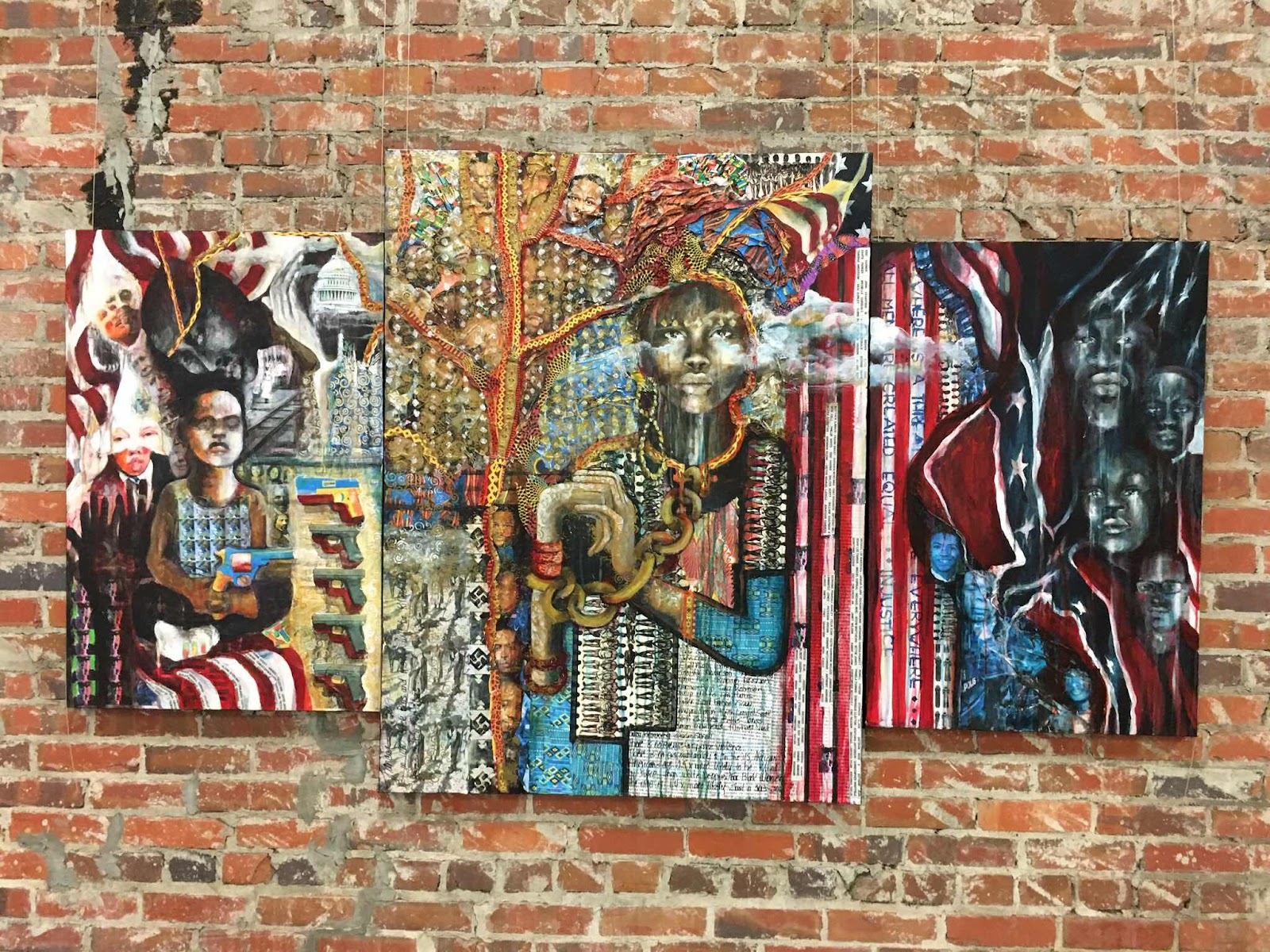 “This Has to Stop”
Francine Mabie
Freedom, equality, and those other fine ideals put forth in the Declaration of Independence in 1776, the ones we will supposedly be celebrating this weekend, were a short-lived dream for some people. Race and skin color almost immediately became the dividing factor for whom these rights were meant.
Mabie depicts the faces of some of the ordinary people who have lost their lives recently in racial violence. On the bottom of the left panel above, a boy holds a toy gun. Mistaking it for a real gun, police shot and killed him. 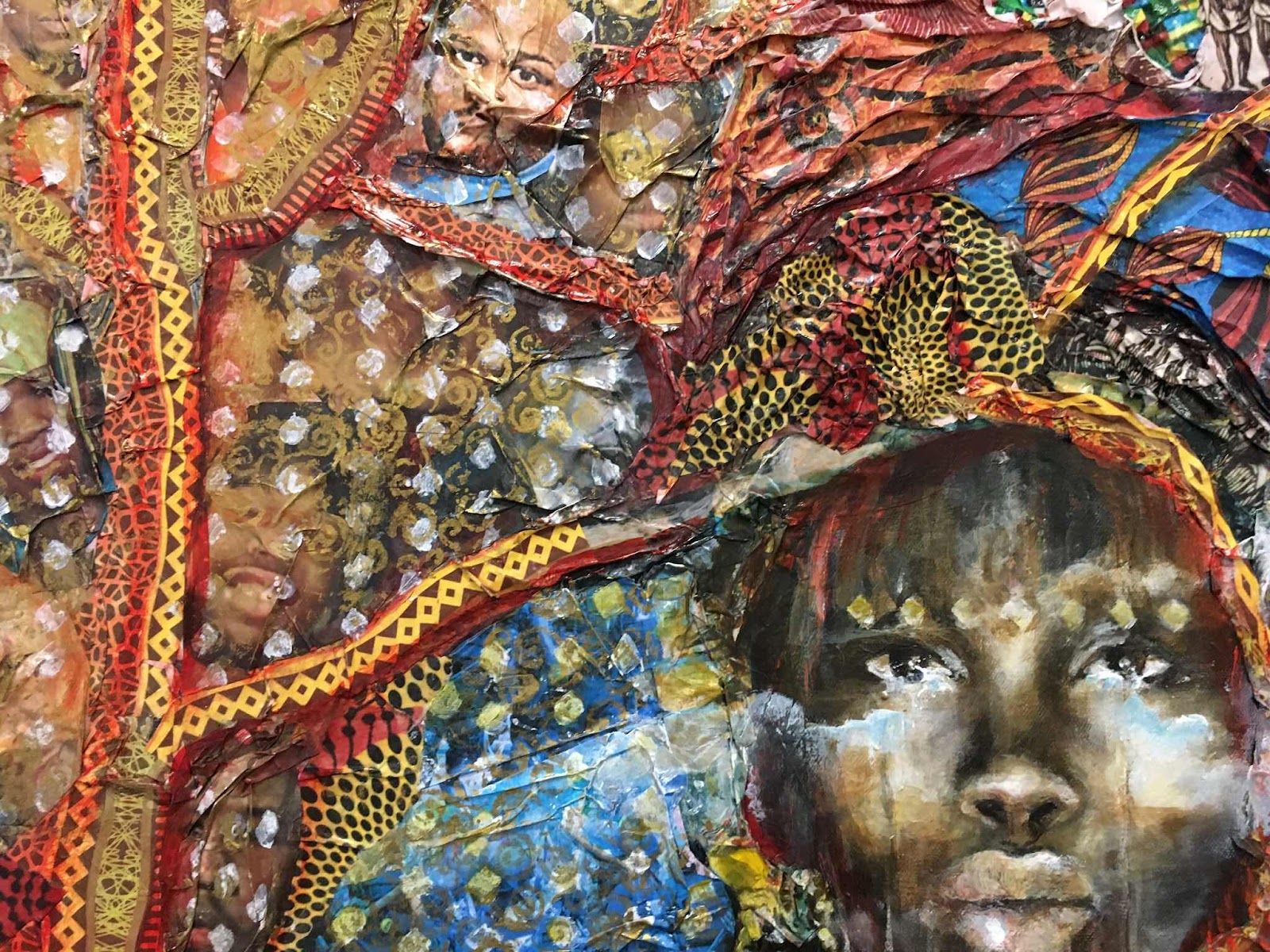 A close-up of the center panel shows details of the complexity and the two- and three-dimensional qualities of the work. We were drawn to stand for a long time and absorb the details. 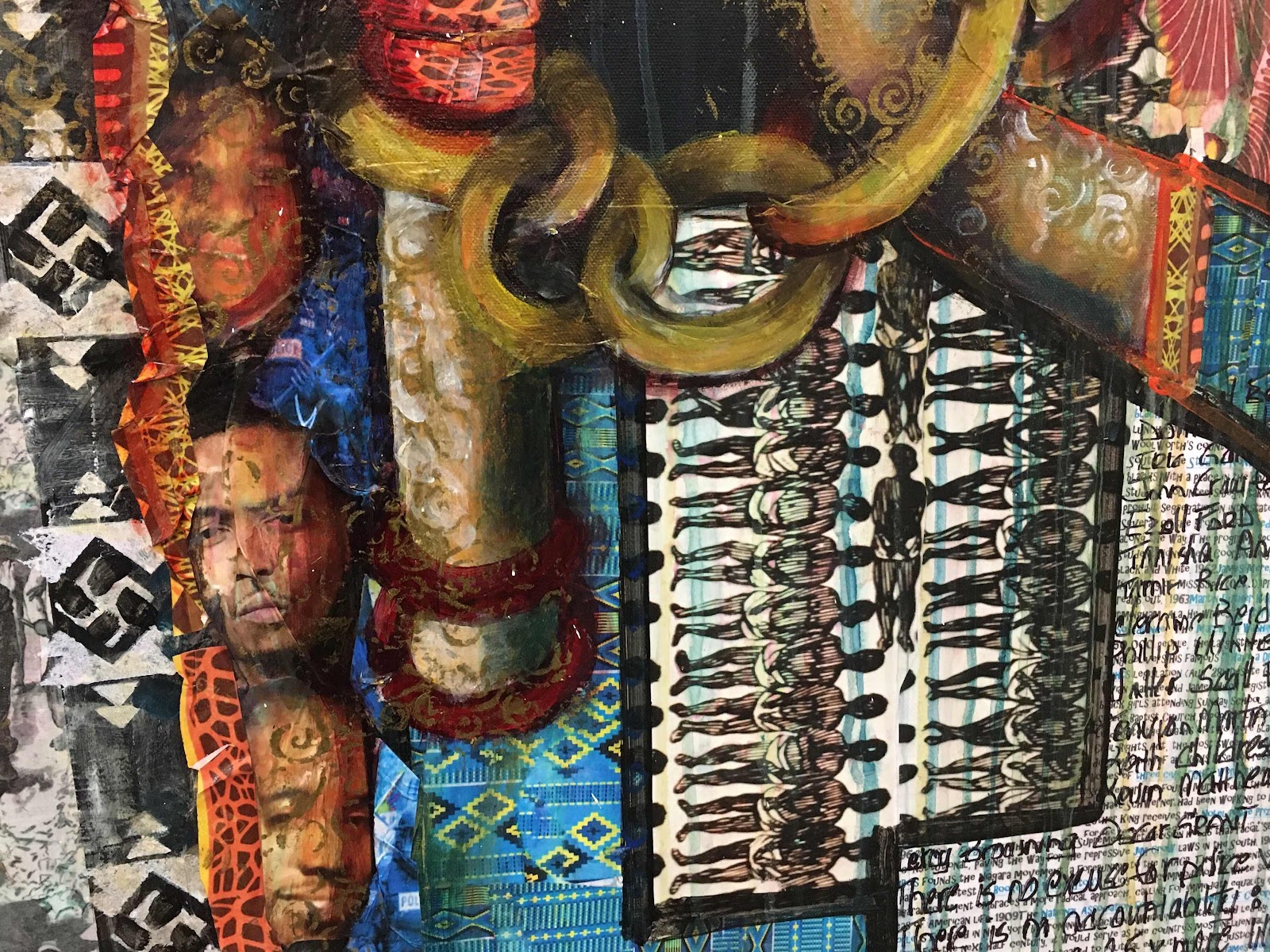 The girl in the center panel wears the chains of the enslaved and a hangman’s noose. Below the chain is a schematic of a crowded slave ship, people chained shoulder to shoulder to the lower decks for the voyage from Africa. 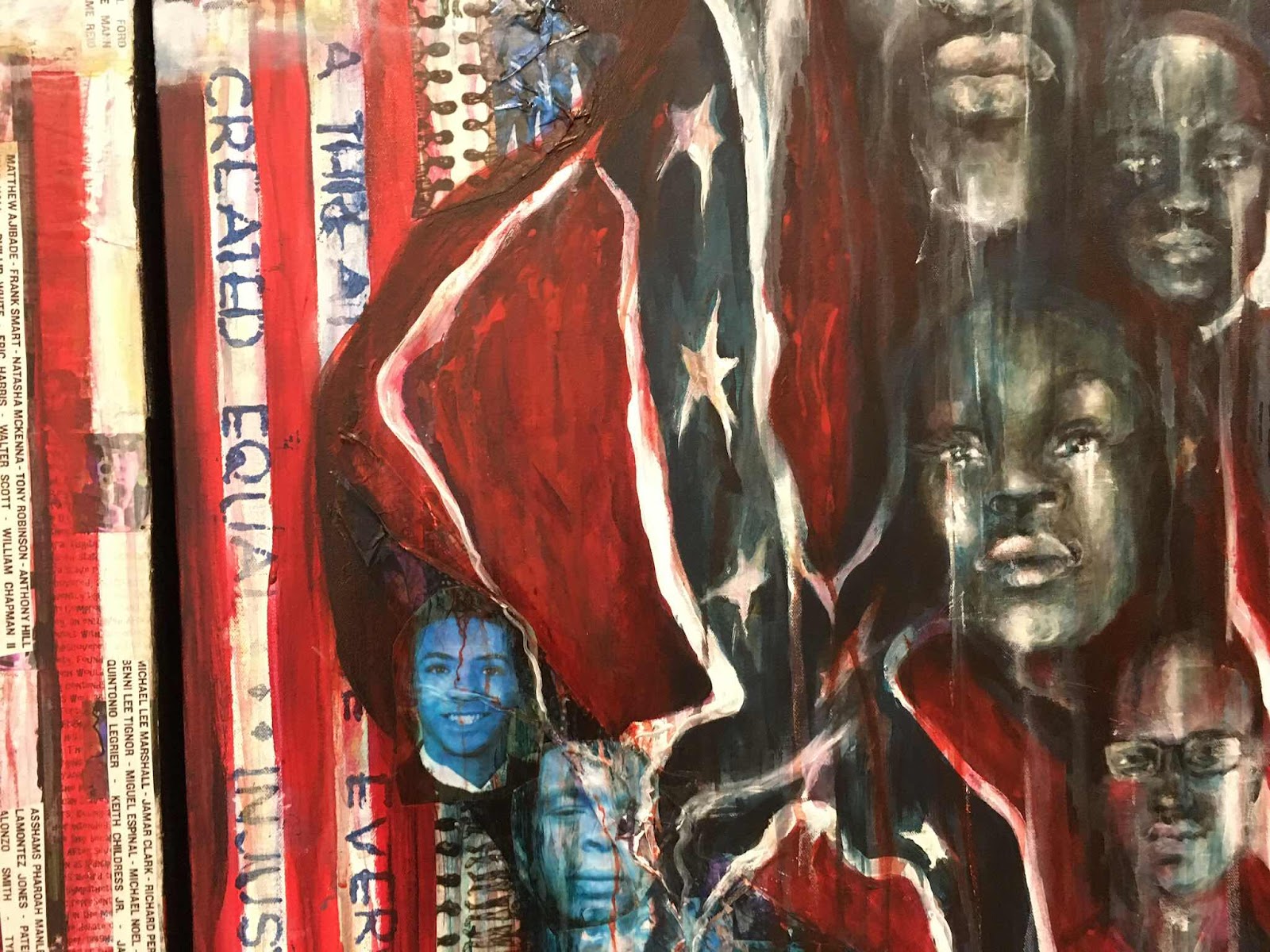 Haunting faces in the right panel emerge from US and Confederate flags, stained with blood. They are people killed for jogging, driving with an air freshener hanging from the rear view mirror, for walking home in a neighborhood not their own, while innocently asleep in their own beds. 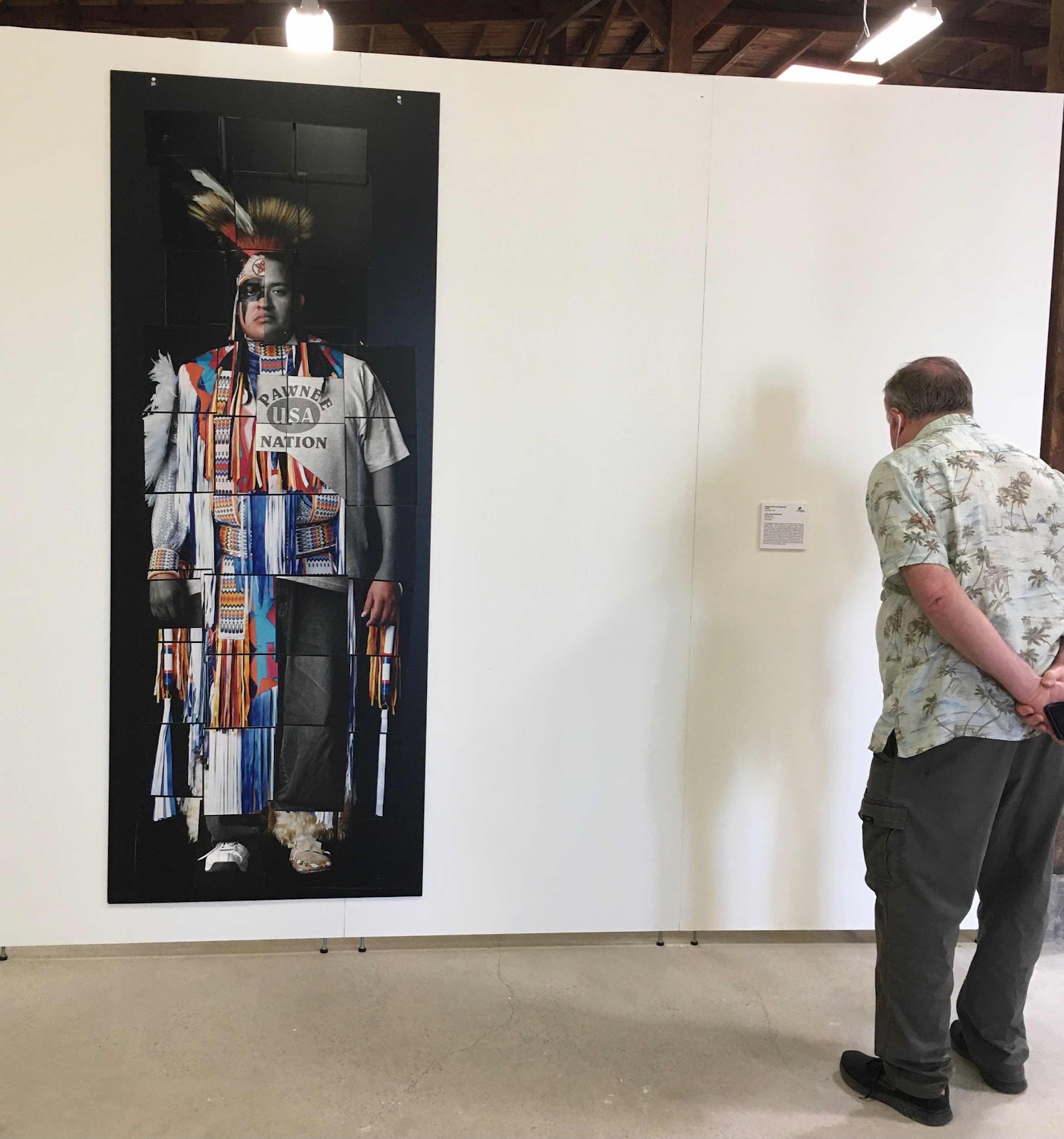 Adrian Spotted Horsechief
Another piece that intrigued us was this one, depicting a different racial group whose life, liberty, and the pursuit of happiness were not included in the Declaration of Independence, treated unfairly in the history of this country just as they are now.
Photographer Thorne Lieberman photographed two life-sized portraits of Native American men, one in their tribal ceremonial attire in color and one in their everyday street clothes in black and white. From the two photos of the same man he created a mosaic, depicting the two worlds Native Americans struggle to live in.
Adrian Spotted Horsechief is a young member of the Pawnee Nation. 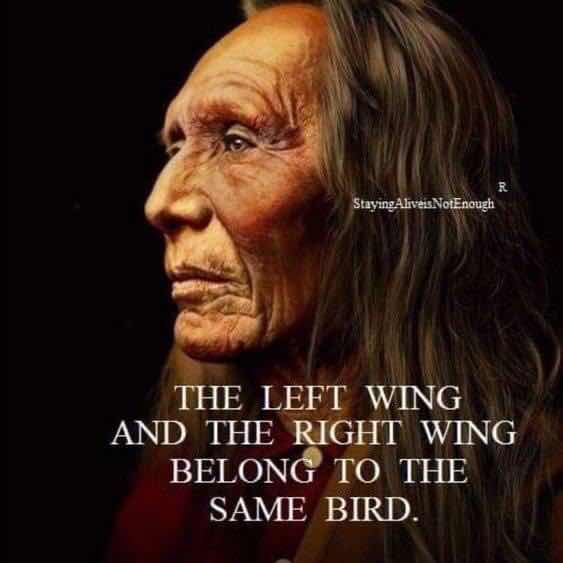 I think we would do well as a country today, with all the division and anger, to remember the above.
To stop calling names and listen.
To respect differences and learn from each other.
To value diversity and unite in solving our problems.
Now that would be cause for a real celebration!

No More Complaining, the Mimosa is in Bloom!

I apologize for the complainy post last week and thank you for the good wishes for my knee! 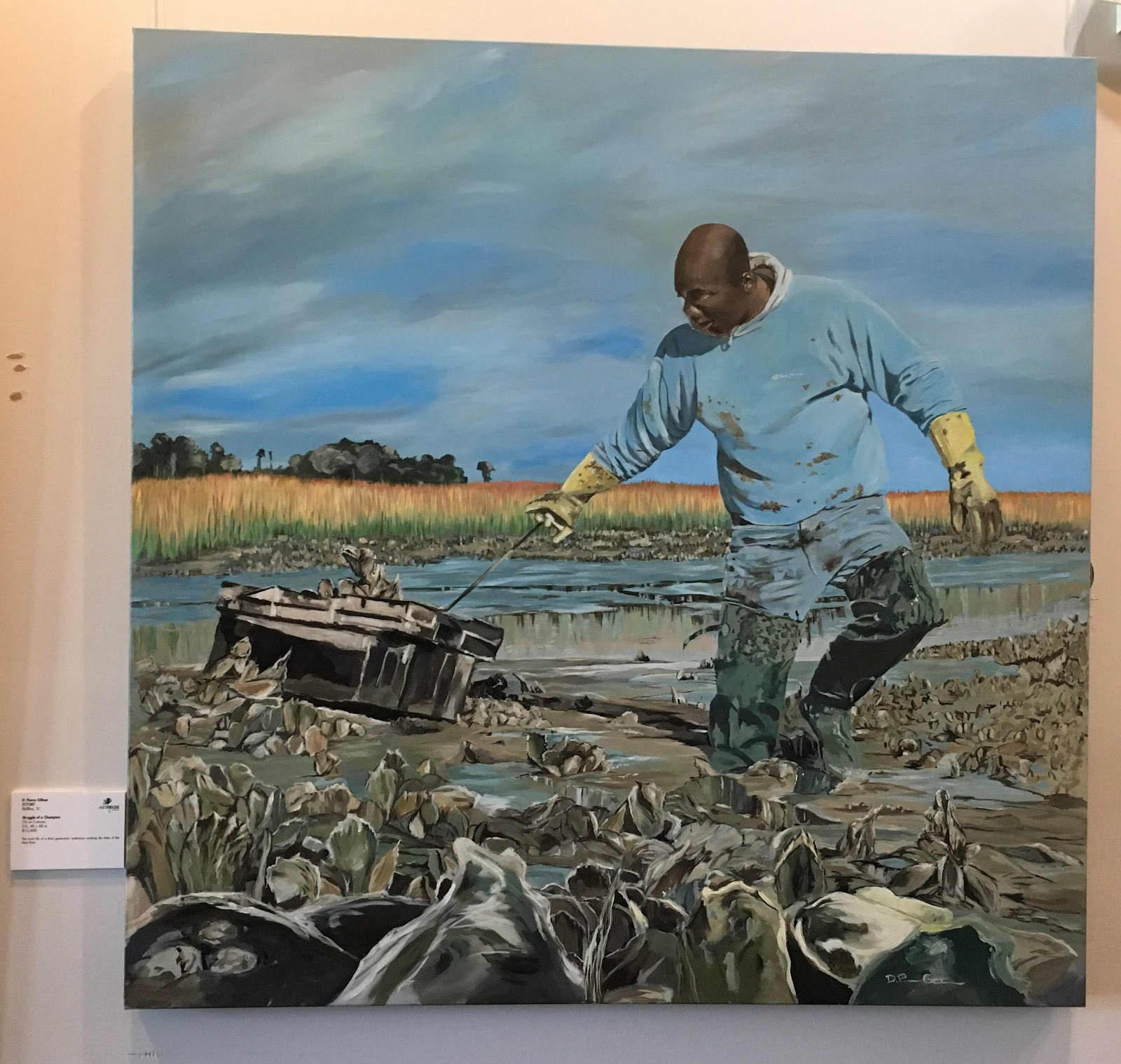 My knee, however, is fine and dandy. Using it for years when it was not right, my back and hip accommodated themselves to the way I walked. After the knee was replaced my walk changed and my back and hip rebelled. So they are being coaxed and wrestled back into the right place by a physical therapist and the muscles built up to keep things the way they should be.
(Probably not the exact terms the doctor used to explain it, but that is the gist of it.)
Struggle of a Champion - D. Pierce Giltner, Bluffton, SC  “The hard life of a third generation oysterman working the tides of the May River.” Doesn’t it look like a photo? It’s a painting!       —Artfields 2021
<~~~> 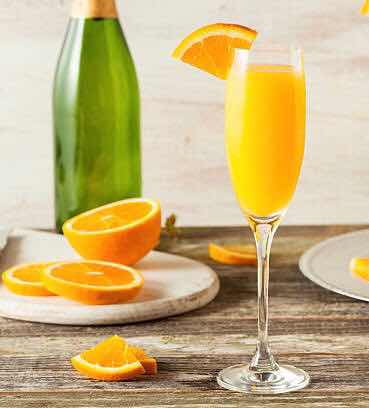 You probably always thought this drink was a mimosa —  a popular breakfast cocktail made from sparkling wine and citrus juice that some say was created by Alfred Hitchcock in the 1940s.
You are excused for thinking that if you’re not from the South.
Actually, a mimosa was first an ornamental tree, brought to Charleston, South Carolina, in 1785 by the famous French botanist, Andre Michaud. (Nobody seems sure how the name got attached to the drink.)
Wealthy mistresses of the Southern plantations, always looking for something exotic to one-up their neighbors’ gardens, eagerly snapped up the latest import from Asia for their lawns. 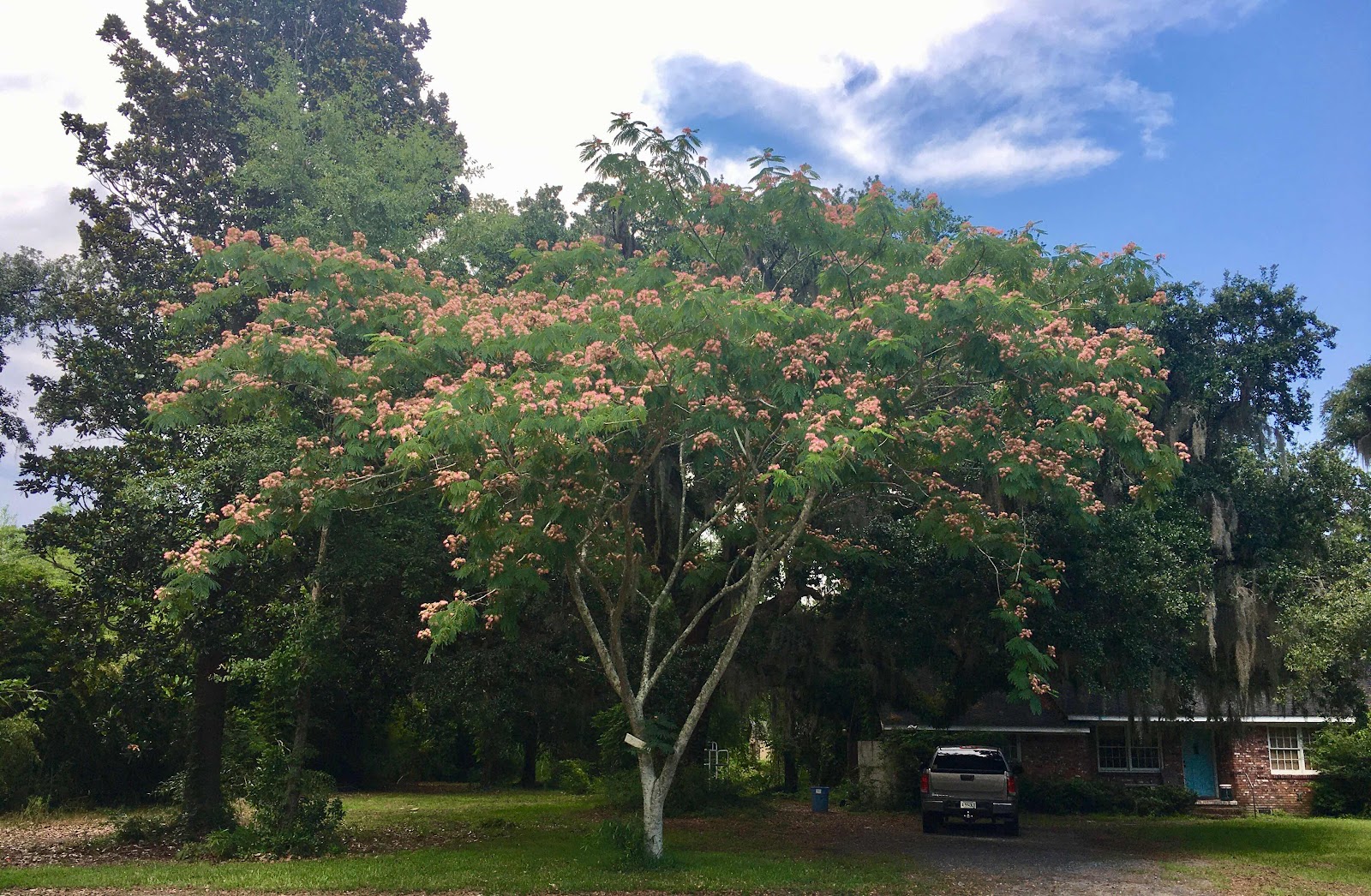 It’s peak bloom for the mimosas right now and because they are fast-growing, self-spreading, and not too fussy about their location, they appear everywhere around older houses and along the highways and country roads. 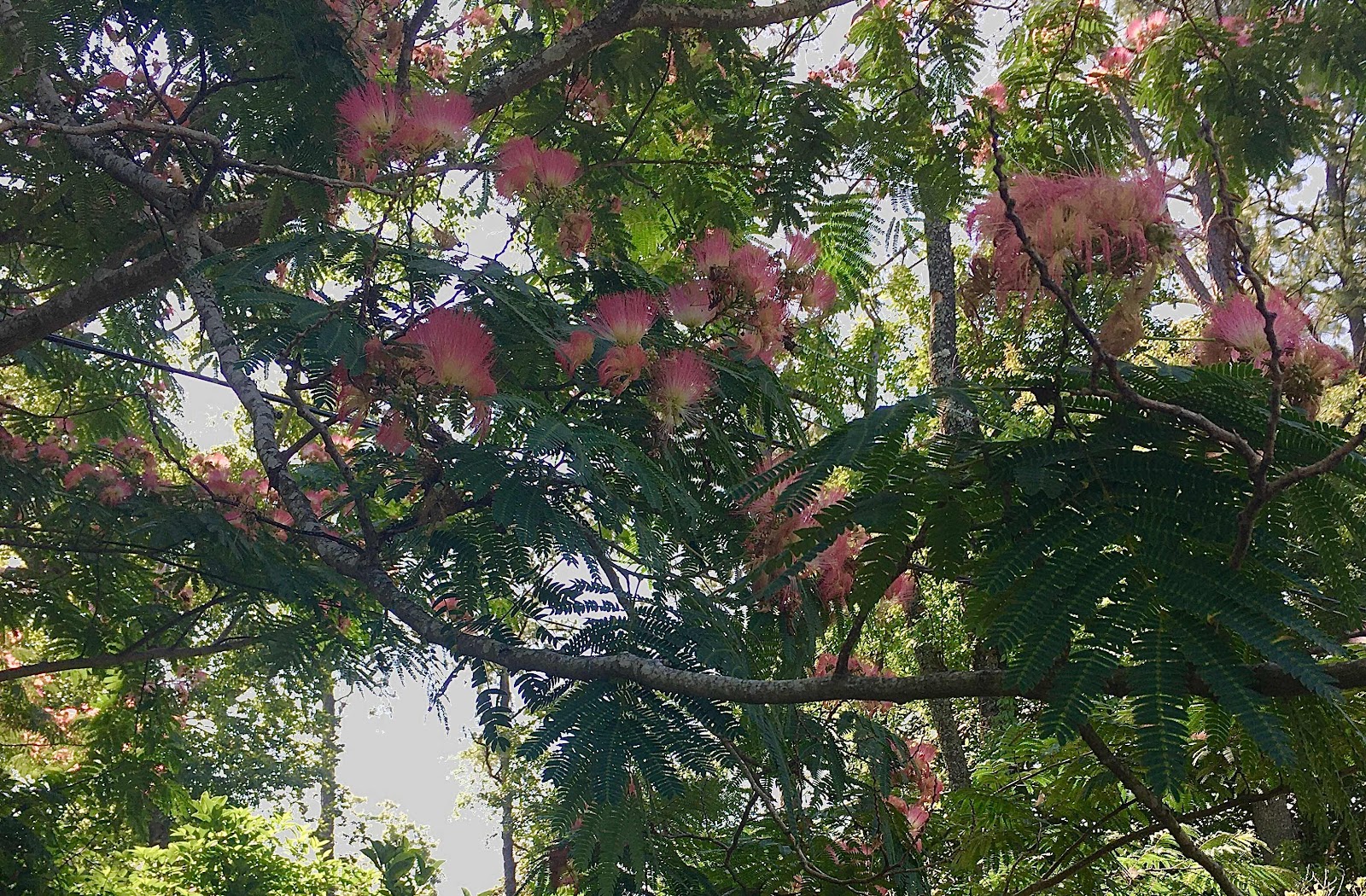 A few fun facts:
#Because its fern-like leaves fold up at night, it is called the Sleeping Tree in Japan.
# They are an understory tree with a unique flat-top appearance and grow to be only 30 feet tall or less. 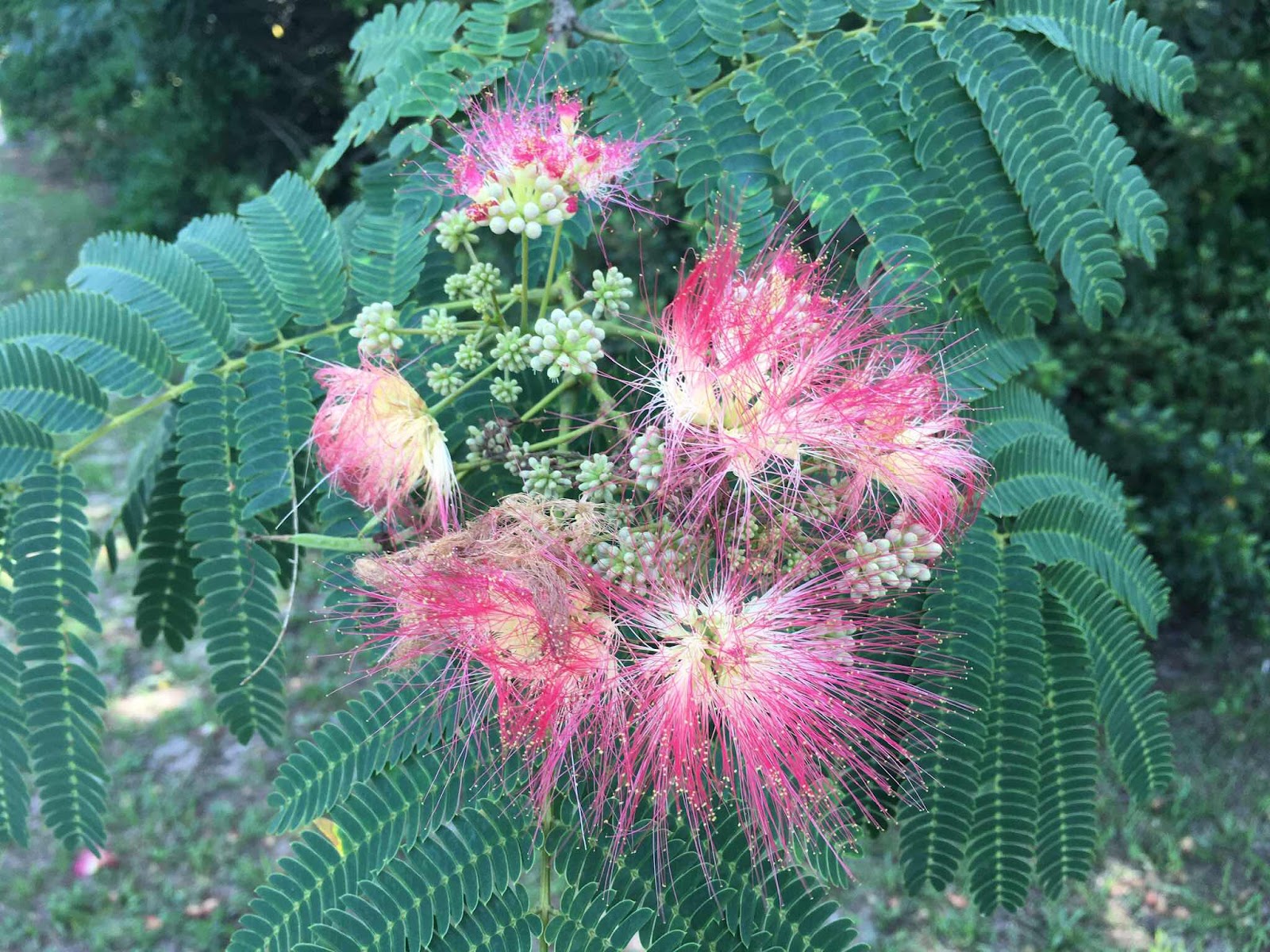 #Bees, hummingbirds, and butterflies love them.
#The long red tubes of the flower are not petals but stamens.
#Some dislike them intensely because of their propensity to spread everywhere and because their large seed pods are plentiful and a pain to clean up. 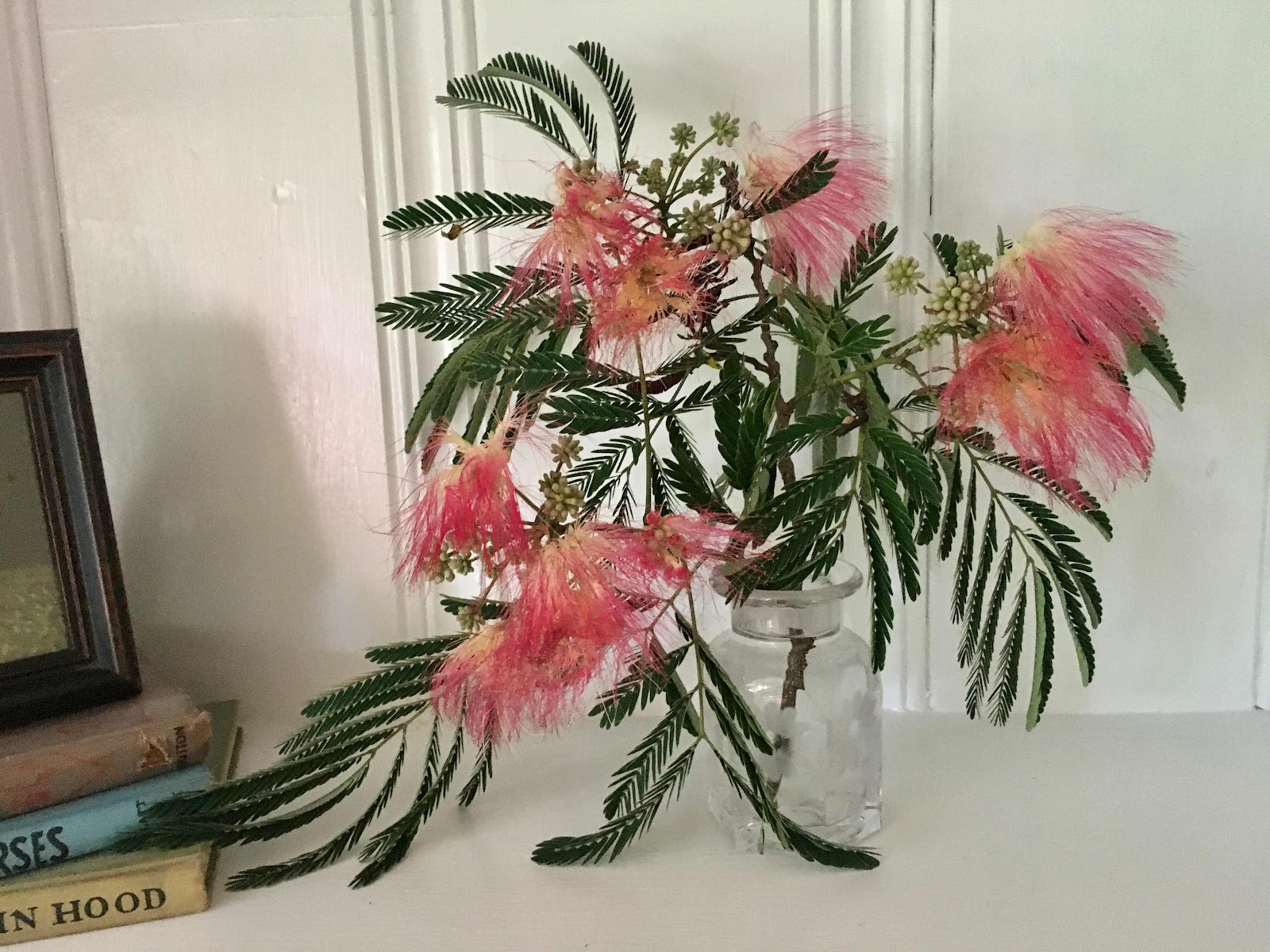 I, however, am a big fan of their feathery and exotic blooms.
Too bad they only last half a day in the house.

From Desert to Rainforest

Where have I been?  Nowhere! which seems to be my blogging problem.
I like writing about new places as we explore them and there has been none of that lately. Instead I am back to physical therapy, my tenth week. Three days a week — an hour appointment, an hour of driving, an errand or two “because we’re up there” — the day is gone. 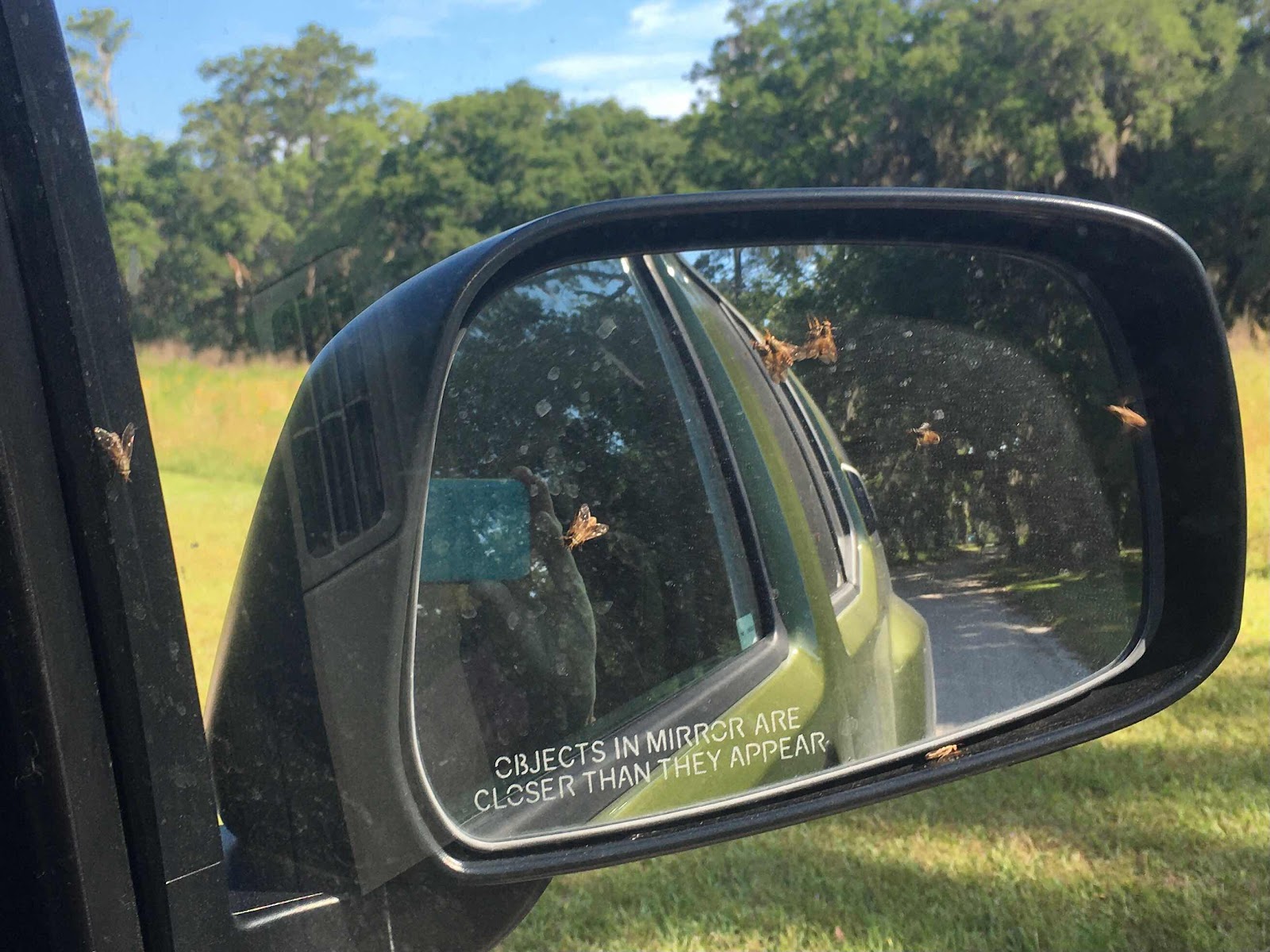 Our long hikes in the woods came to an end when the deer flies came out in May.
Horrible things! They descend on the car, then you as soon as you leave the car. They are relentless, getting in your face, your hair.
And they bite!
Right through your clothes. 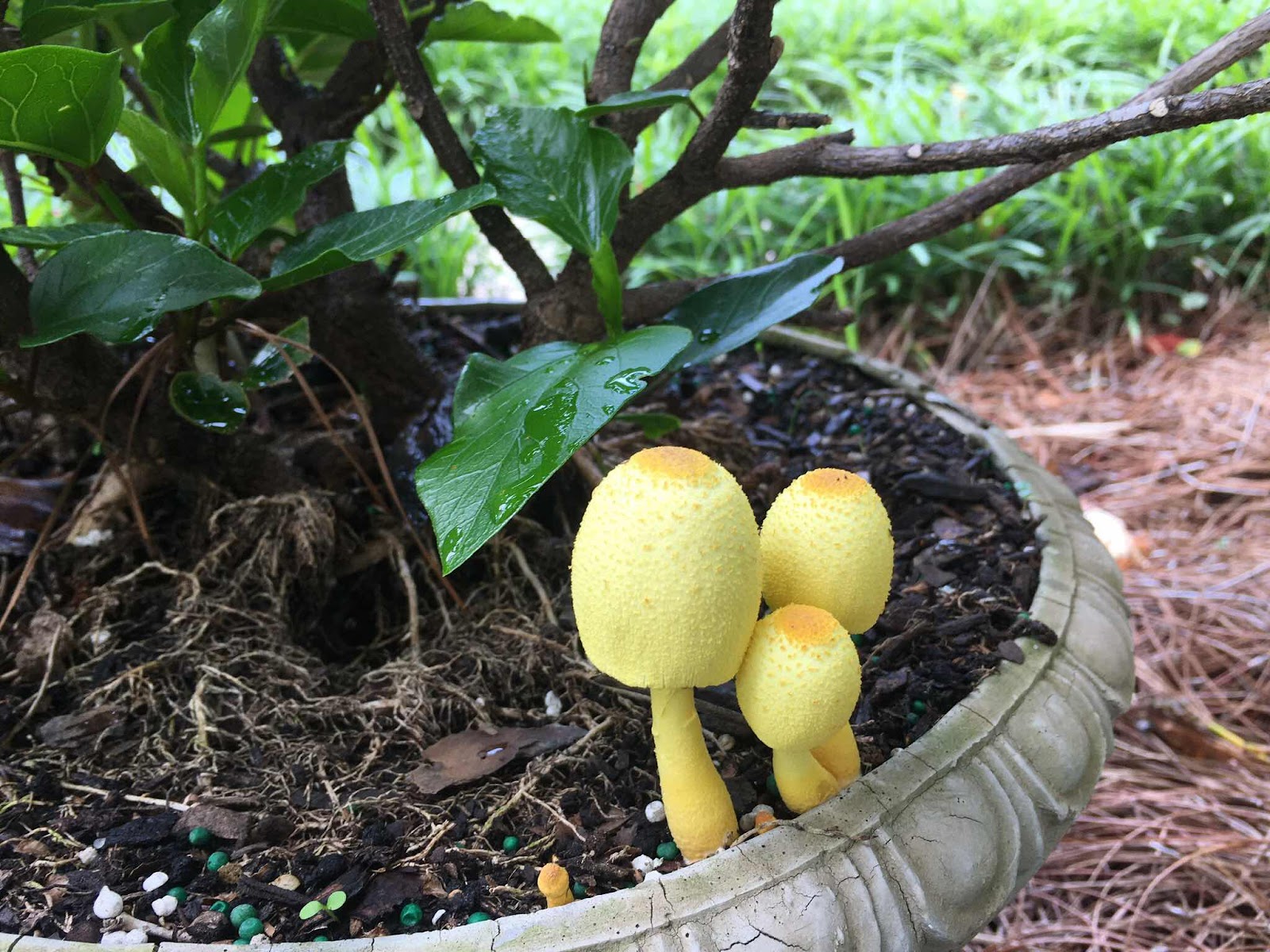 We had been in a drought for weeks with no rain whatsoever and then last week the rains began and continue day after day. If it’s not storming or pouring buckets, humidity is rising from the ground.
These cheery Flower Pot Parasols popped up overnight in our hibiscus planter.
Anyway, it’s unbearable for humans to be outside, and it’s only the beginning of summer. 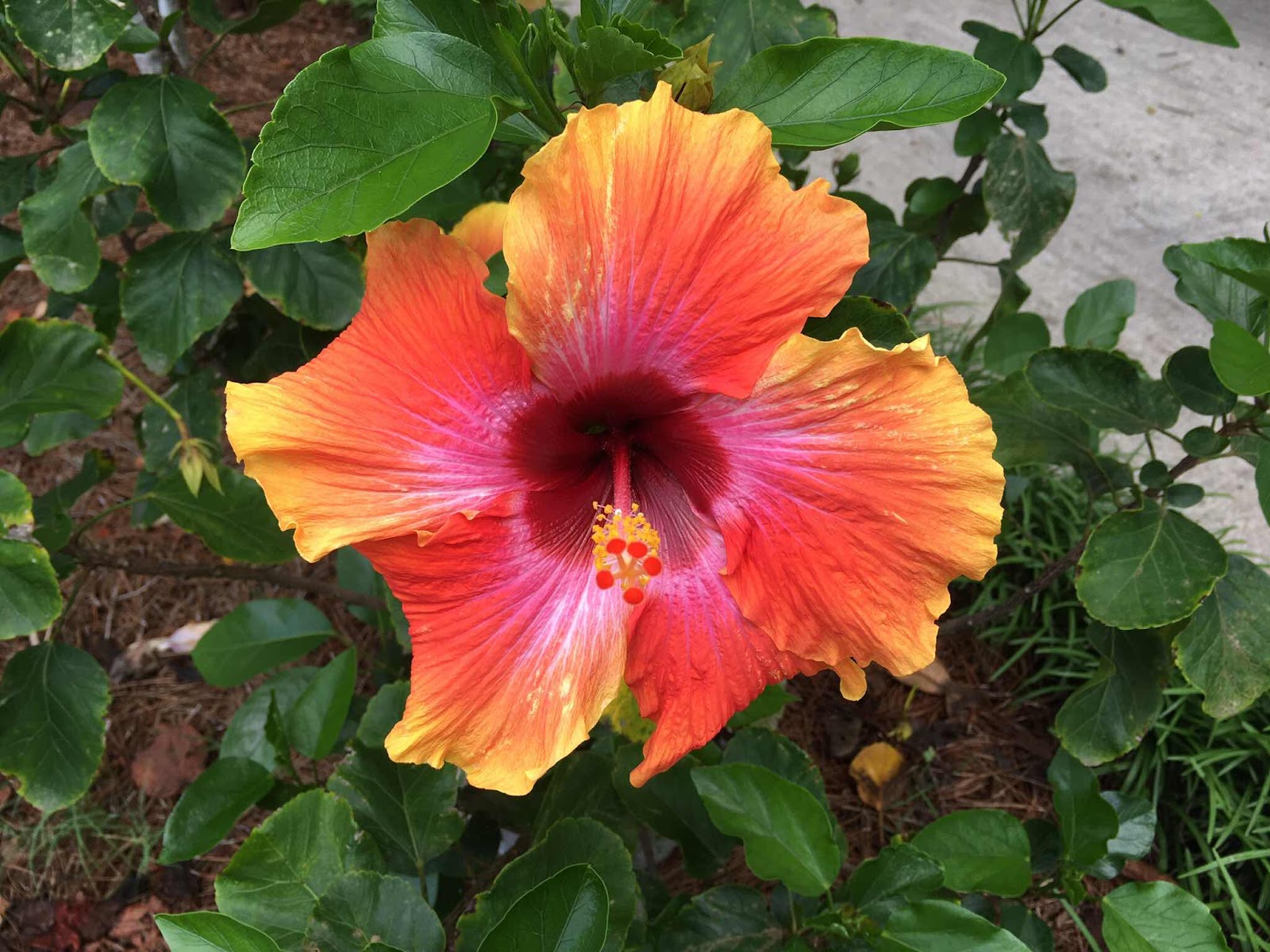 Our hibiscus don’t seem to mind. The blossoms are over eight inches across! 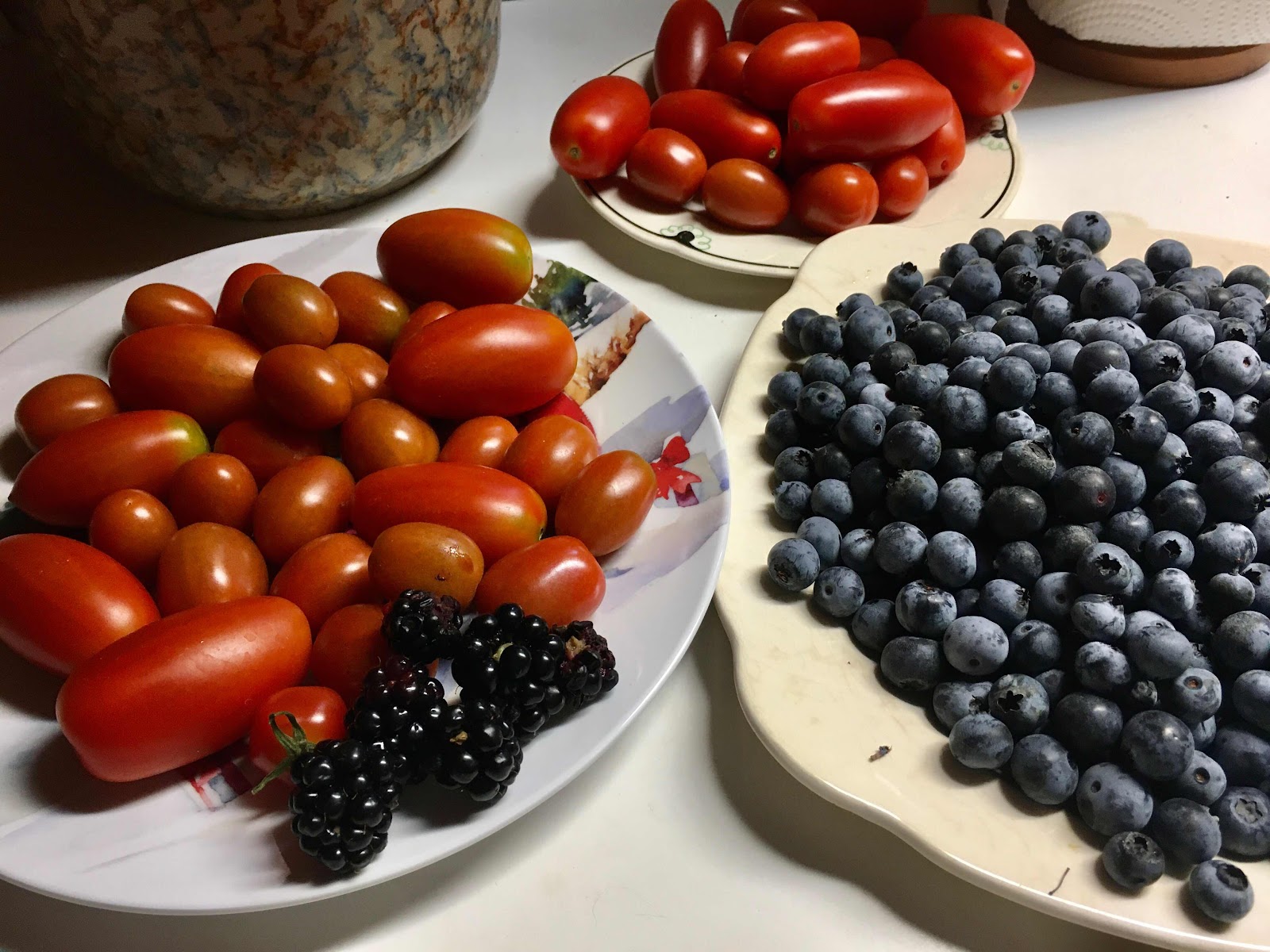 And in spite of the monsoons, our tomato plants are producing delicious fruit. As have our neighbor Malcolm’s blueberry bushes, which he so generously shares with us.
This is the first year our blackberry bushes have ripened berries. We’re not too fond of the berries but — oh well. 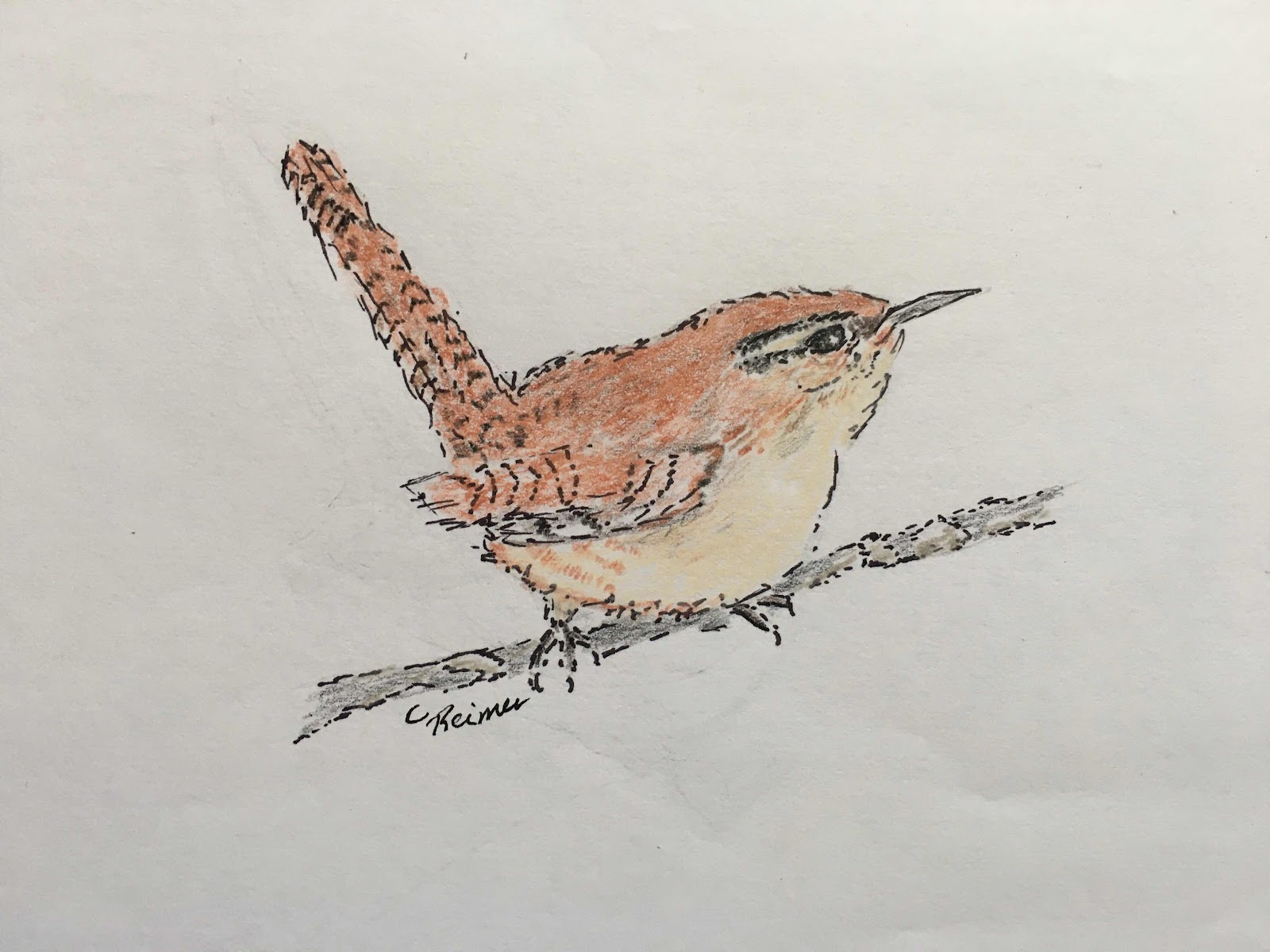 Lots of birds are nesting in our yard and bringing their comical babies to the backyard bird feeder buffet. We offer suet, sunflower seeds, and peanut butter for our summer guests.
We have baby Carolina wrens, cardinals, red-bellied woodpeckers, downy woodpeckers, titmice, chickadees, and house finches all entertaining us with their antics.
The babies are partial to the peanut butter log, both for the tasty treat and the handy perches for their clumsy flights.    I can spend hours drawing them!
We hope for adventures ahead but my Bucket List is in “recalculating mode”. The pandemic was sobering, life-changing in ways I haven’t expected. Which has led to mulling over the one I made when I retired and making revisions. It’s definitely looking to be a bit more “modest” and shorter than the original!
Theoretically we can now travel some places again, at least in our own country, but there is the reality of facing up to it that my body is no longer as eager to undertake certain activities and countries. We will be visiting family mostly for the near future and then maybe in the winter some travel adventures can be planned.
I will leave you with this. I read this morning that, “A new study shows that vegans are the happiest people,” rating themselves 7% happier than meat eaters do. Then I saw an ad for one of those subscription food services that deliver ingredients for a vegan meal, along with a recipe for making it. 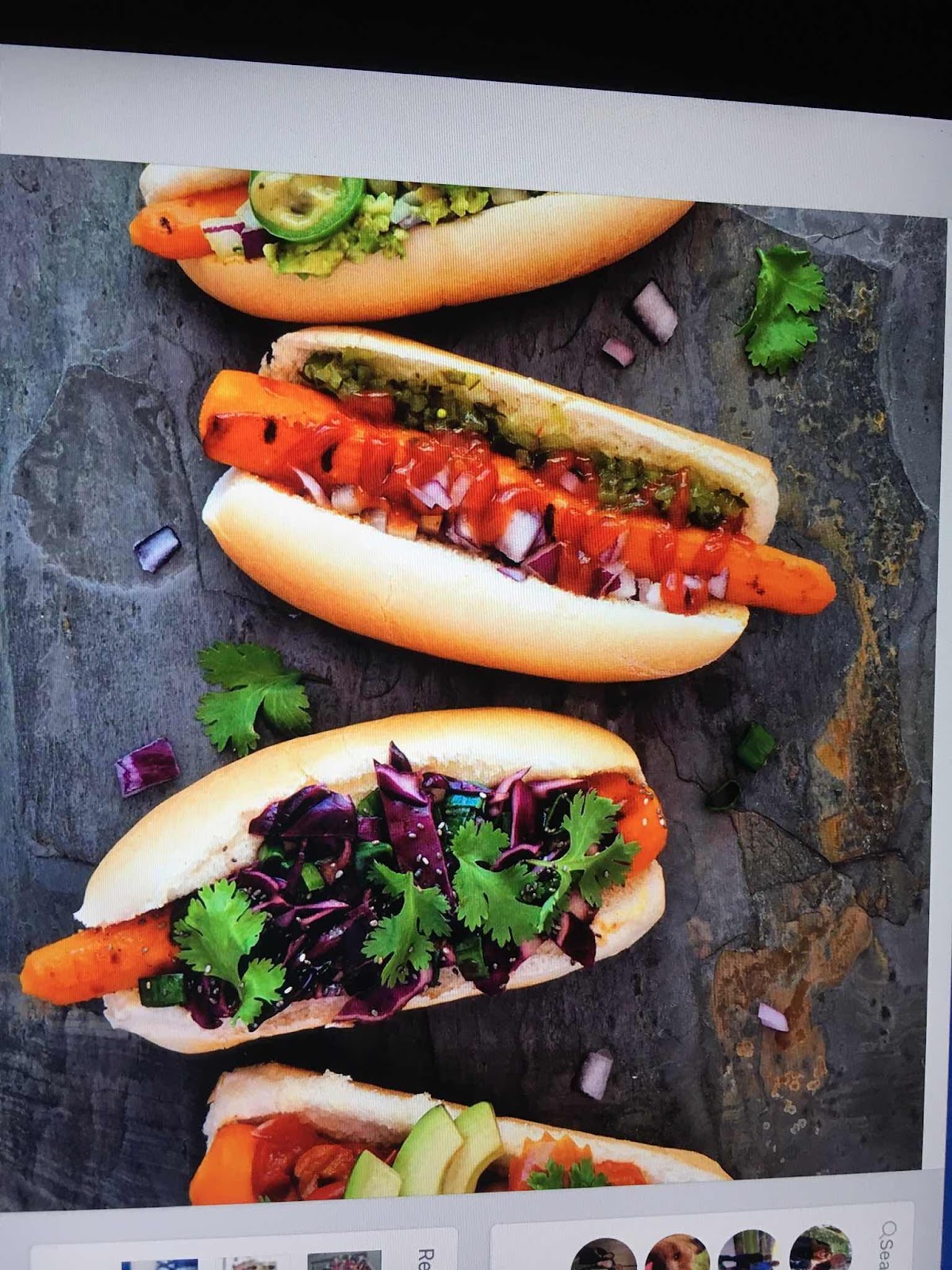 See the orange thing in the bun?
85% of our meals are vegetarian, but I think we will pass on this one!
Posted by Cynthia at 8:10 AM 21 comments: