The Last of the Fire Towers

A photo of an old abandoned fire tower on a South Carolina history Facebook post caught my attention. It’s near our home and we never knew it was there! Reading the comments on the post was fun, too, as many descendants of the fire wardens shared their memories.
On a cold and cloudy Saturday, we set out to find that tower and any others.
The first one, Winyah Tower, we have driven by at least a hundred times and never noticed it. And once the leaves are back it will retreat into the trees and be invisible again. 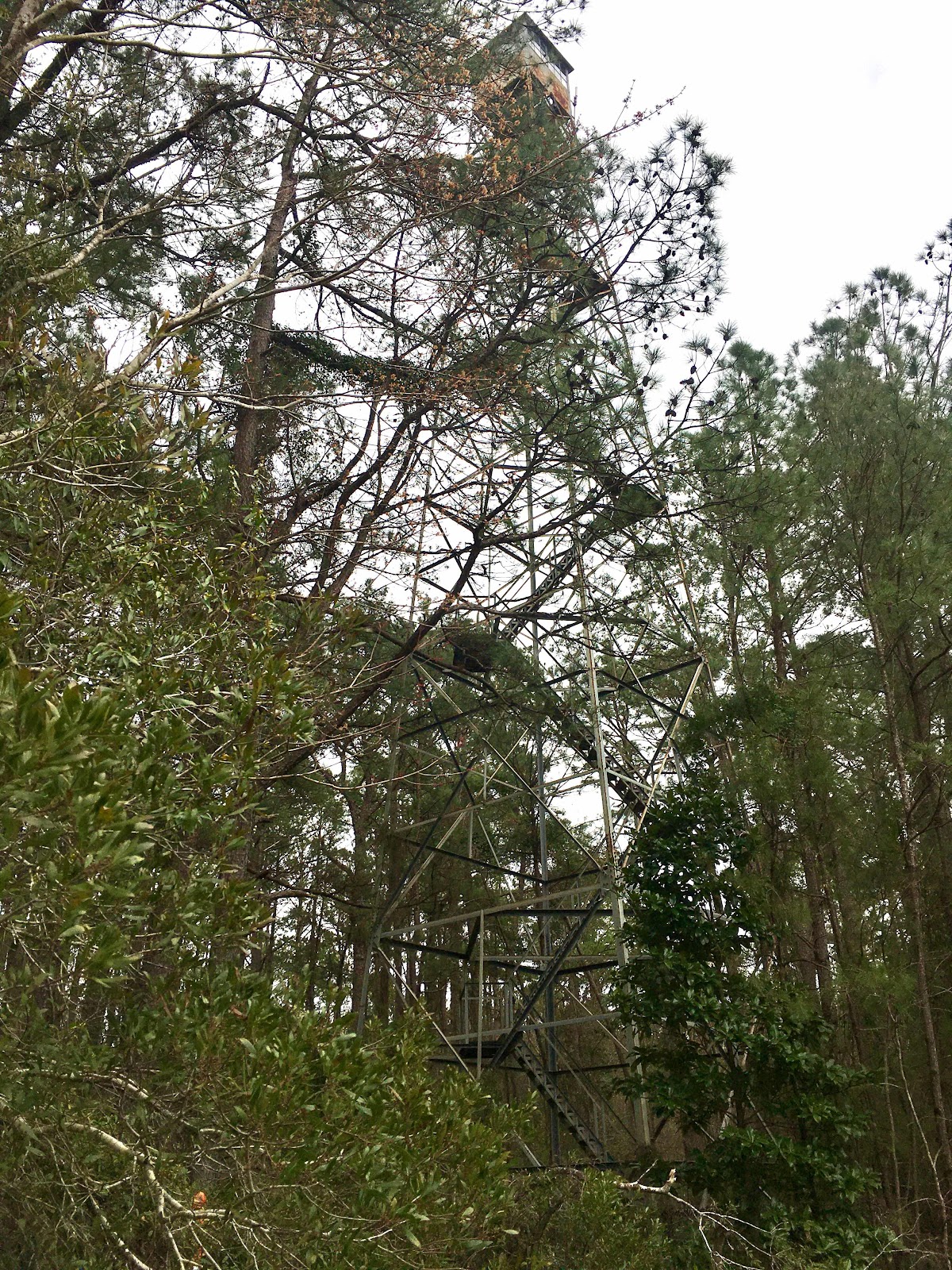 This is what is barely seen from the highway in winter.
Easy to miss when you are whizzing by at 65 mph.

Tommy C. “My grandma ran the Winyah Tower. I loved going there and getting scolded for throwing paper planes all over the ground.”

The first fire tower in the state was built in 1930 by the South Carolina Forestry Commission. An operator was hired for the princely sum of $2 an hour, not to exceed $50 a month, plus lodging. Included was a year-around home on 10 acres of land for his family to grow their own food, most often vegetables, milk cow, pigs, and chickens. They were called “firefighter families” and often the job was handed down from parents to children, becoming a family tradition. 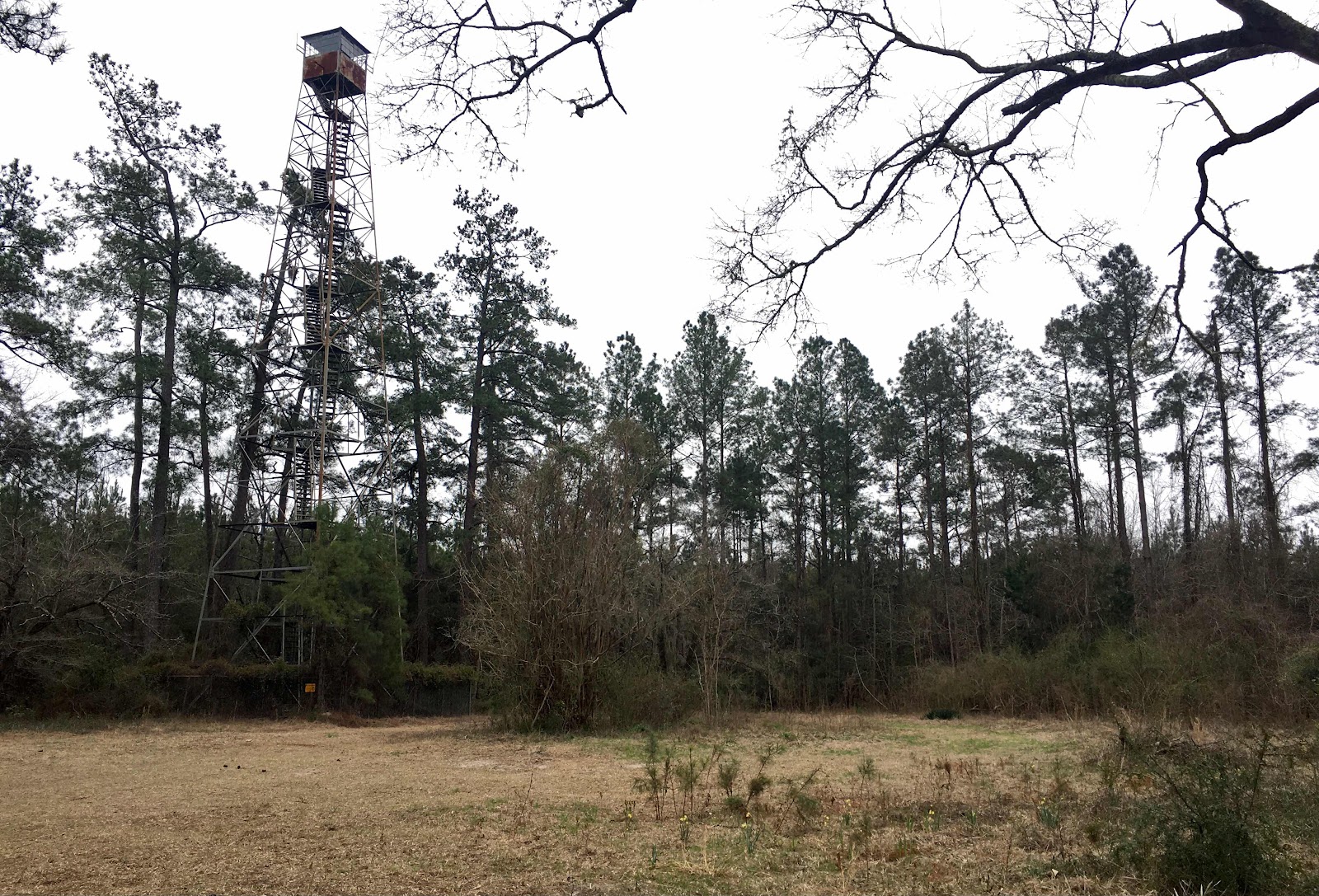 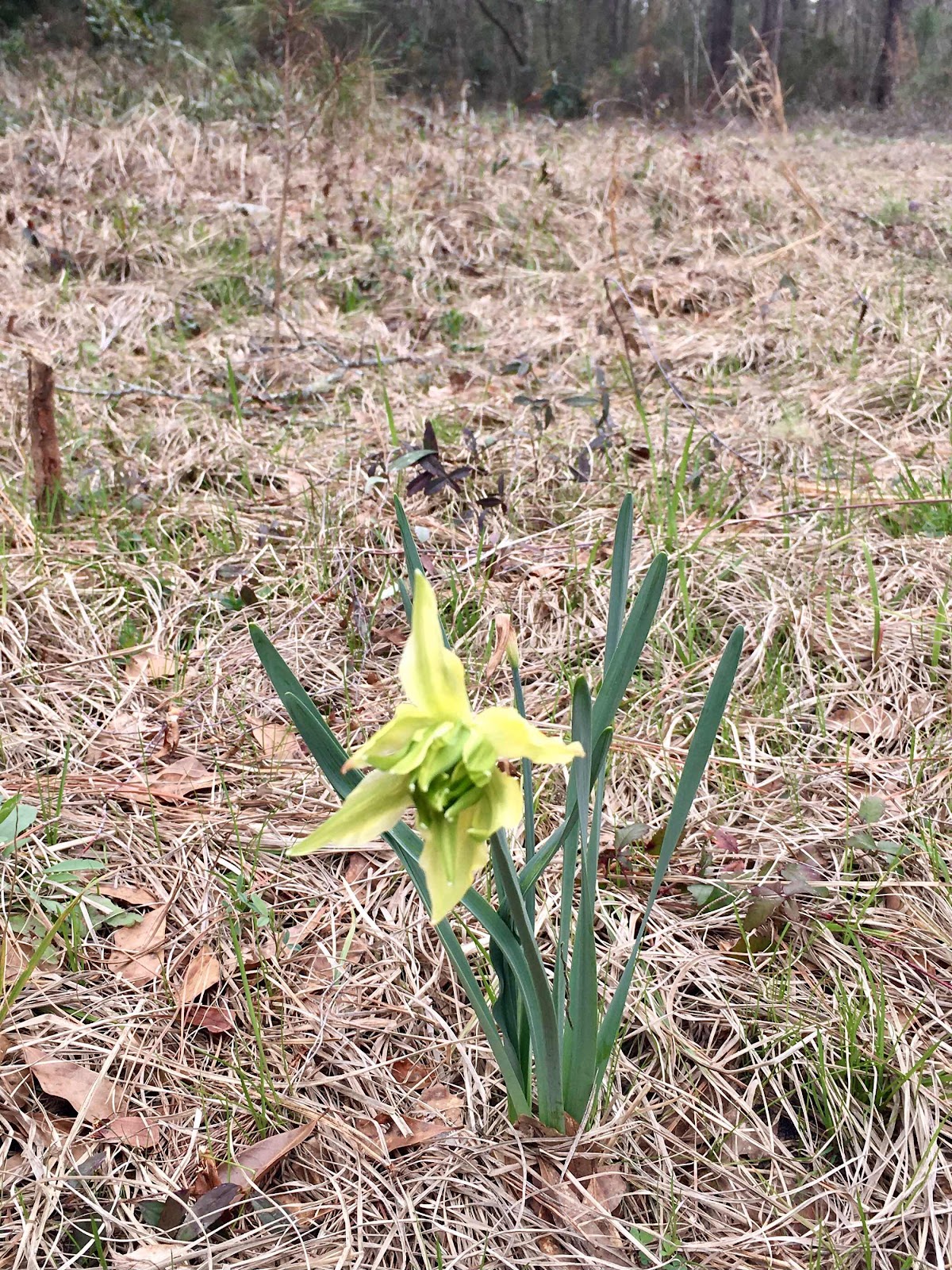 The Sampit Tower was the only one where we could find evidence of the house and farm. On the right above, the yellow dots are daffodils, and in the center is a planting of crepe Myrtle. This would have been the yard of the house. In the forest there is debris from the buildings that once stood there.
Ross L. “My grandparents lived and worked there. I remember playing under the tower and in the barn, feeding Grandpa’s mule Little Hunkey. The house is gone but the tower is still there, bringing a memory of my past every time we go to town.”

Many towers followed across the state, 55 to 120 feet high above the trees, from the mountains to the coast. Each had a 7 by 7-foot observation cab at the top. Hours the operator spent in the cab depended on the danger of fires. When danger was high he would spend as many as 10 hours on duty searching the horizon for smoke.
A network of telephone lines was built to link the tower operators to firefighters on the ground. These lines became the first phone service available to most of rural South Carolina. 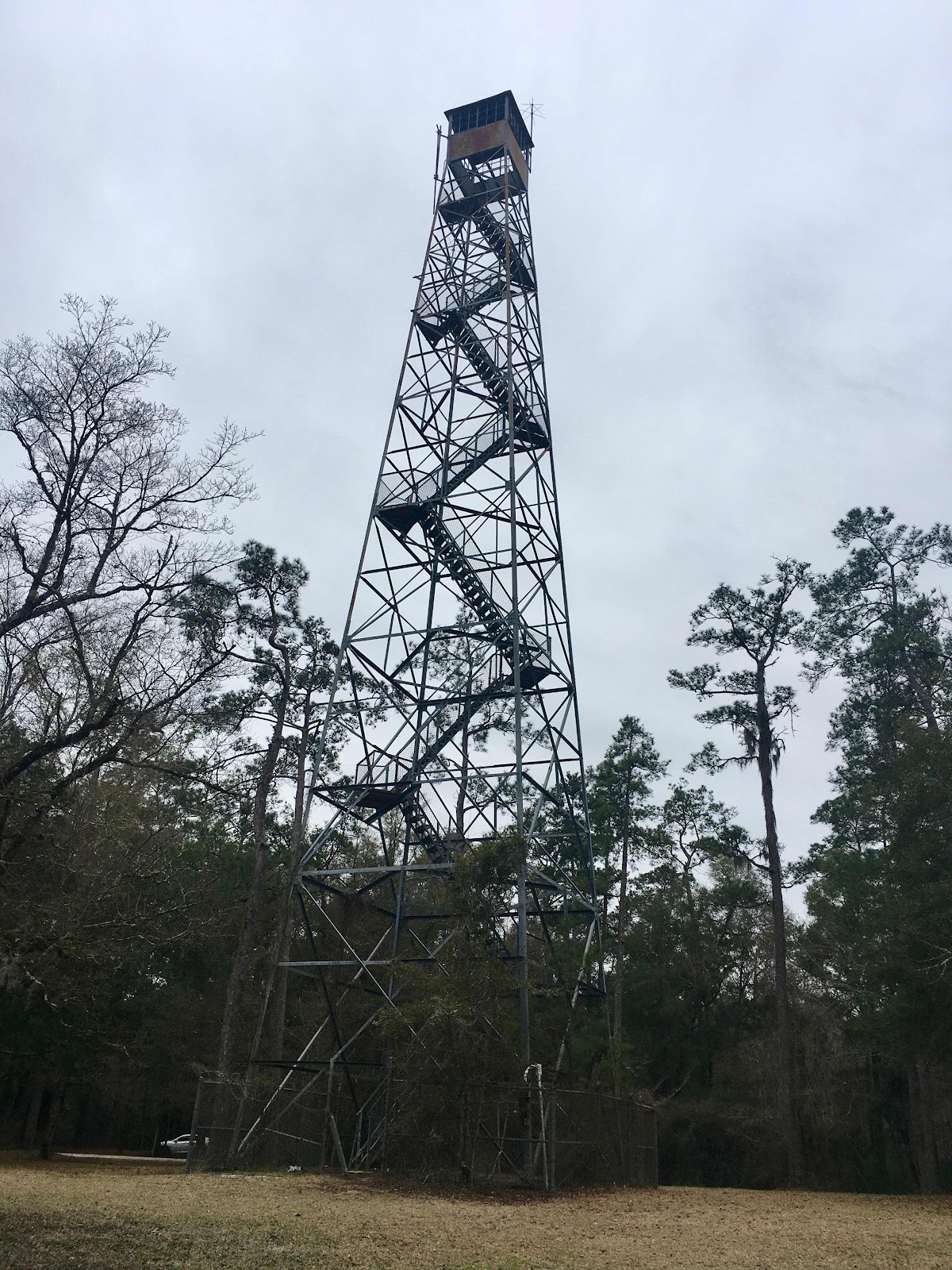 The Honey Hill Tower is now part of a campground in the Francis Marion National Forest. Most of the towers have fences around them and the steps have been removed on the first flight of stairs to discourage climbers. 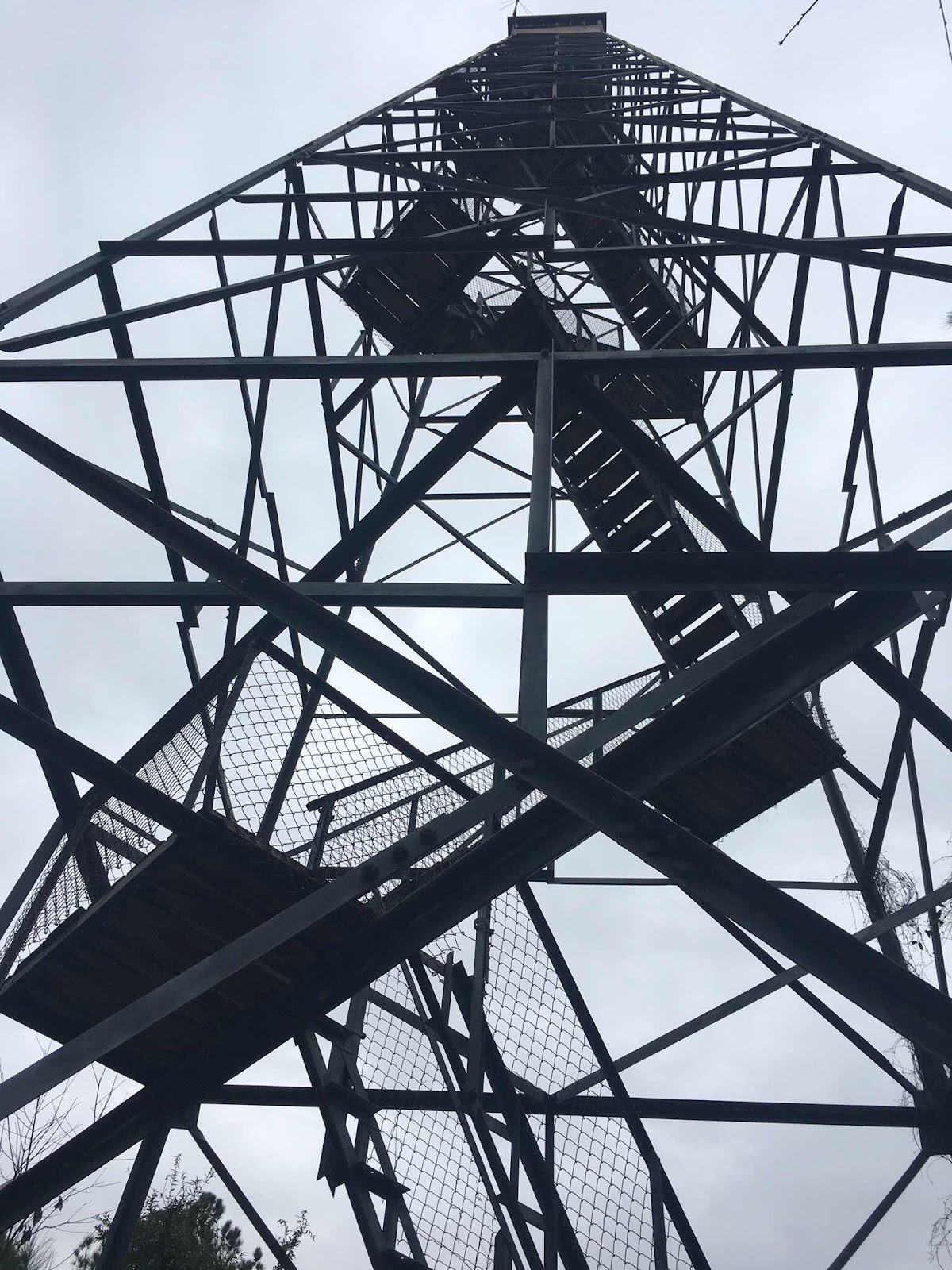 In the early days the firefighters on the ground were paid fire wardens who arrived at the fire in their own vehicle. 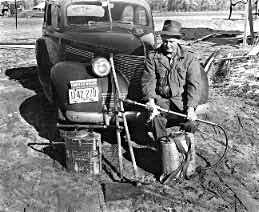 They carried hand tools and, if necessary, enlisted volunteer helpers. The tools included backpack hand pumps to distribute water on the flames. It doesn’t look like that backpack pump would hold much water!
(Photo from the Forestry Commission archives)
Ann B. “Daddy started as a smoke chaser. I broke my baby bottle on one of the concrete posts. Got whipped for trying to climb the tower.”

From the 1960s on, most tower operators were women and their husbands were employed as the firefighters on the ground.
Minnie T. “I used to stay with Grandma and Grandad and sometimes she would send me up the tower to watch for fires for her. I enjoyed every minute of it!”
As satellite technology made the human eye obsolete, the towers and their operators were phased out in the 1990s. Today only 30 (out of hundreds) are still standing. We were lucky to find four of them within 20 miles of us. 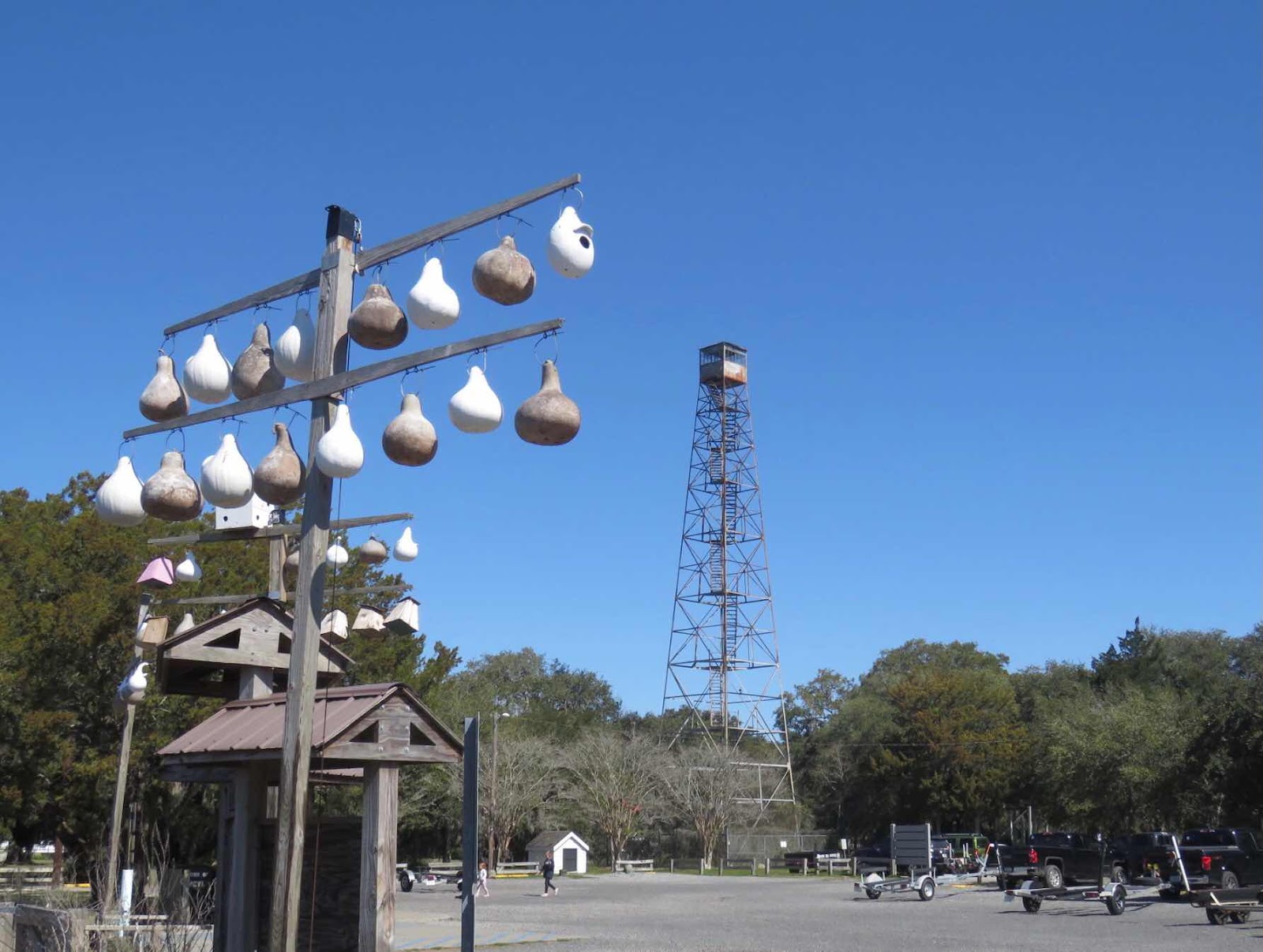 The final tower we found is the McClellanville Tower, which miraculously survived a direct hit from Hurricane Hugo that wiped out much of McClellanville and a 400-mile wide swath of South Carolina forests in 1989. 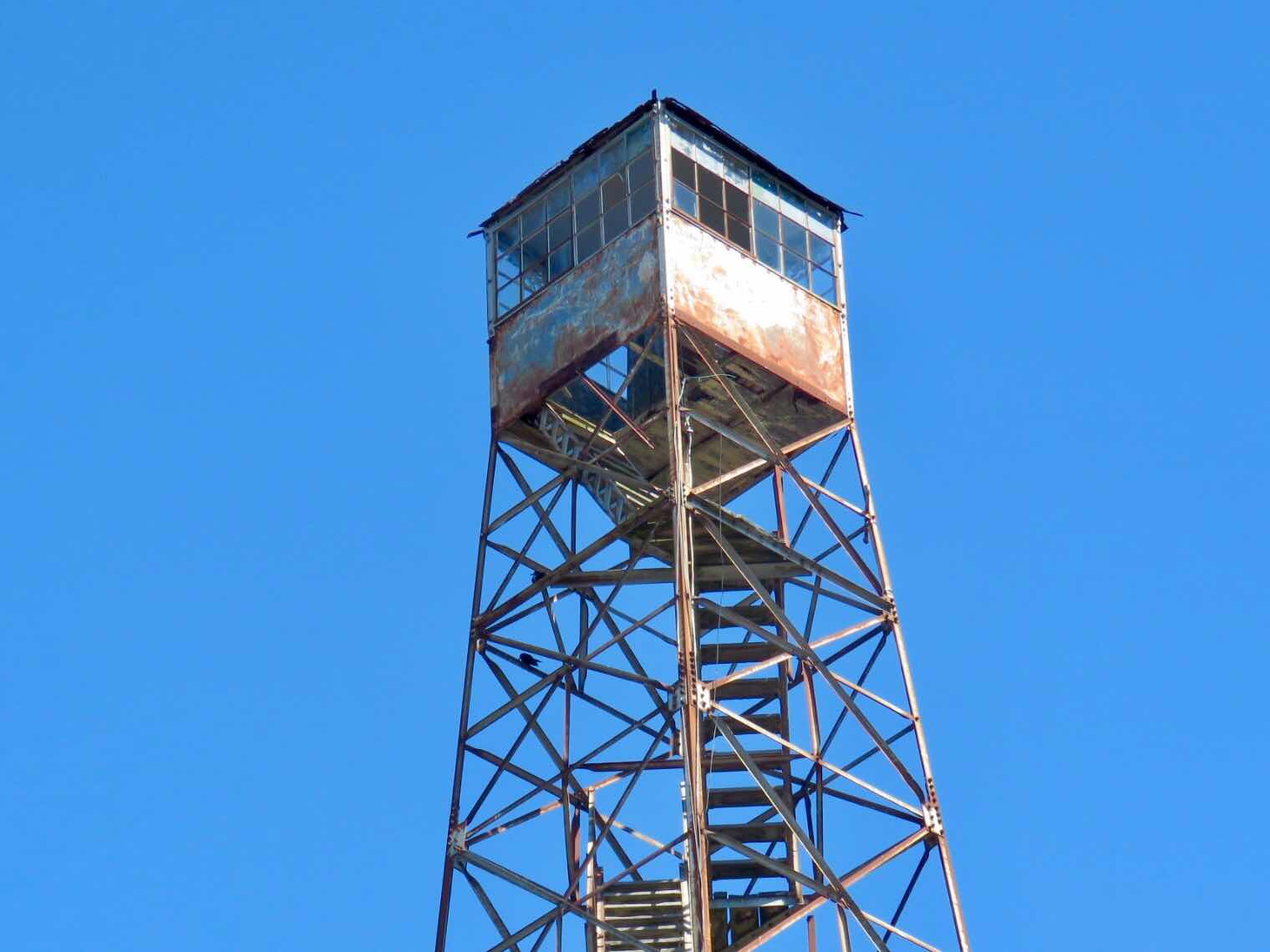 Climb the tower to the cab in your imagination, then look out over the shrimp boats on Jeremy Creek, across Cape Romain, and all the way to the Atlantic Ocean. 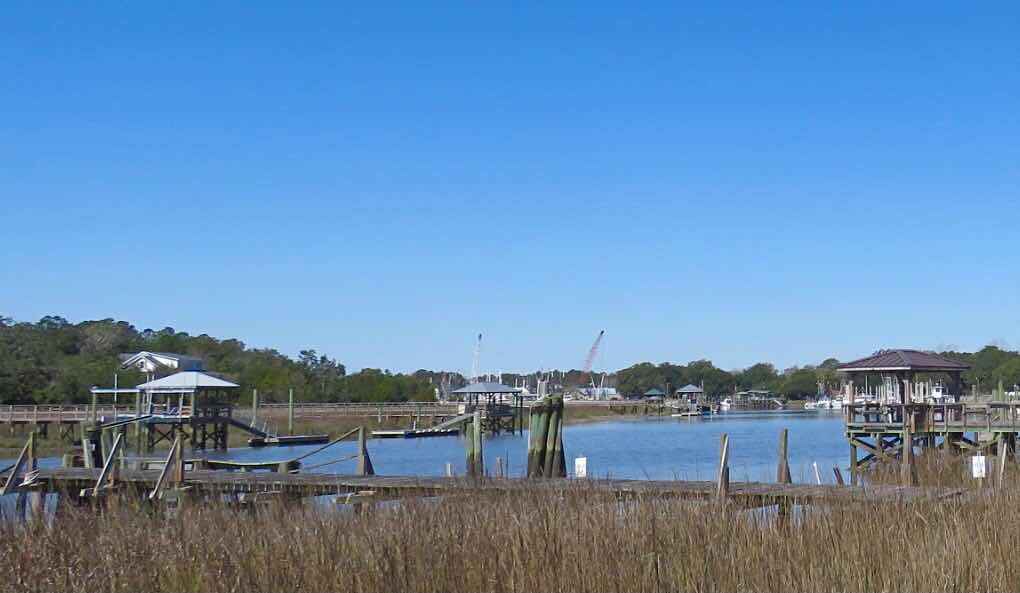 On a day like this, what a fine job to have!
(This post is especially for one of my most faithful readers who began his forestry career with a stint in a fire tower, not in South Carolina but in Idaho: The Writer’s big brother.
Big hugs from us, Marty!)

As the Road Wanders