With weathercocks on my mind from my last post, I thought I would share another rooster photo, this big blue guy. 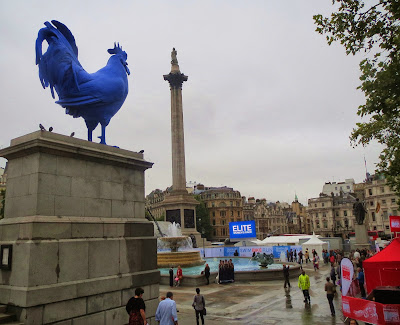 This is  Cock  by Danish artist Katharina Fritsch and it occupies the interesting Fourth Plinth in London's Trafalgar Square.  He is huge, and his blue color is pretty, well, eye-catching! 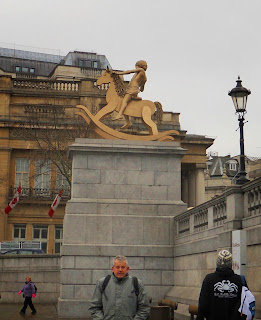 When I was there in March, I saw this bronze sculpture of a boy on a rocking horse.  All the other statues in the square have historical significance, with ties to war.  I think it's interesting that the Fourth Plinth sculptures seem to have peaceful and sort of everyday human themes.  In 2009, ordinary people were invited to pose for an hour on the plinth holding anything they could carry up there themselves.  They could be viewed live on the Internet.
I'm not sure what is planned next, or when.  But I have a suggestion.  Most permanent scultures in Trafalgar Square represent men, males (even the lions!) and their achievements.  I think it's the ladies' turn!
Thanks for reading!  I'd love it if you could leave a comment!﻿
Posted by Cynthia at 5:37 AM