"Stealthy and unseen, our submarines were the 'eyes and ears' that monitored Soviet maritime operations in every ocean of the world." 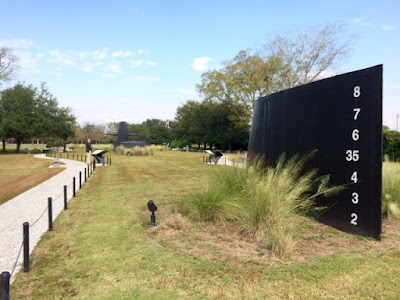 I had never heard of the Cold War Submarine Memorial in Charleston until we stumbled upon this huge, partially buried thing. The "thing" is the rudder and sail of the USS Lewis and Clark buried in the ground with a grassy mound representing the deck of the submarine in between. The park is a memorial to the Americans and the British who patrolled the seas during the Cold War from 1947-89. 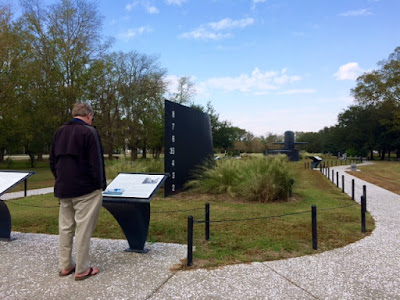 The sail alone weighs 60 tons and sits below-ground on a specially engineered platform to hold its weight. In the distance, behind the trees at the center of the photo, you can just see the sails of the beautiful Charleston bridge.
All around the submarine is a park with a walkway and 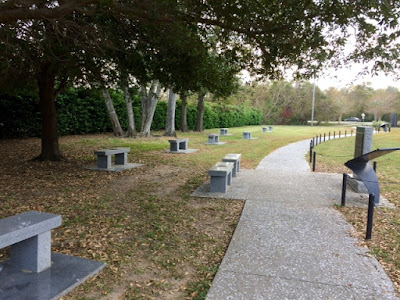 information. The walkway gives you an idea of the size of the vessel the sub crews spent months at a time on. At the peak of the Cold War, as many as 40,000 submariners, their families, and civilian workers were stationed in Charleston and remained there for 25+ years of the Cold War.
All the ballistic missiles that armed all the U.S. subs were assembled in Charleston and loaded there. Besides the American subs, every submarine from the British Royal Navy came to Charleston to be loaded with nuclear missiles.
The paved walkways are lined with granite benches dedicated to each of the crews who served on the subs that patrolled the seas during the those years. 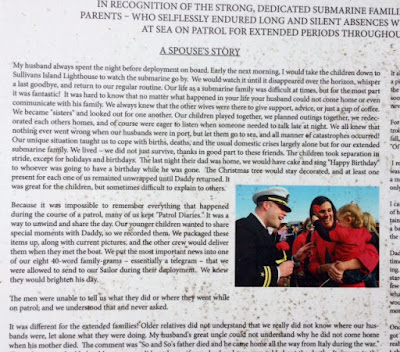 The families of the men who served are also recognized for the long, silent absences they endured and the sacrifices they made while their family member was at sea.
﻿
﻿ 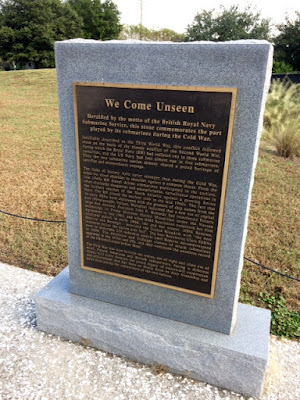 A marker commemorates the British Royal Navy Submarine Service that patrolled the sea alongside the Americans during the Cold War.

"The links of history were never stronger than during the Cold War when we stood shoulder to should against a common threat." 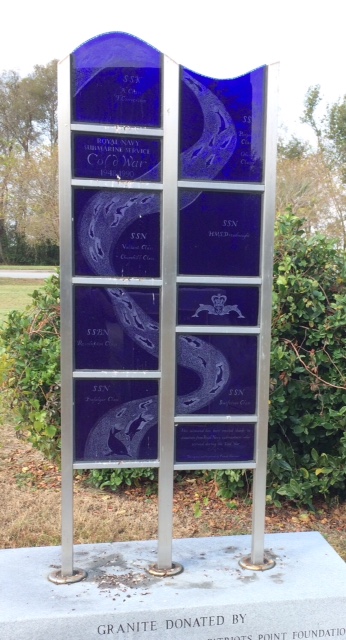 The beautful blue glass is part of the British memorial.


The last memorial on the walk is for the crews of two American submarines that were lost at sea.
In 1963 the Thresher was about 1300 feet below the surface when a piping joint gave way.  The sub sank and all aboard were lost in a matter of seconds.
The USS Scorpion was scheduled to return to port on Memorial Day1968 to gathered families and waiting fanfare. It never arrived. What really happened is still a mystery or a secret but there is some evidence that there was a confrontation with Soviet warships that sank the Scorpion. 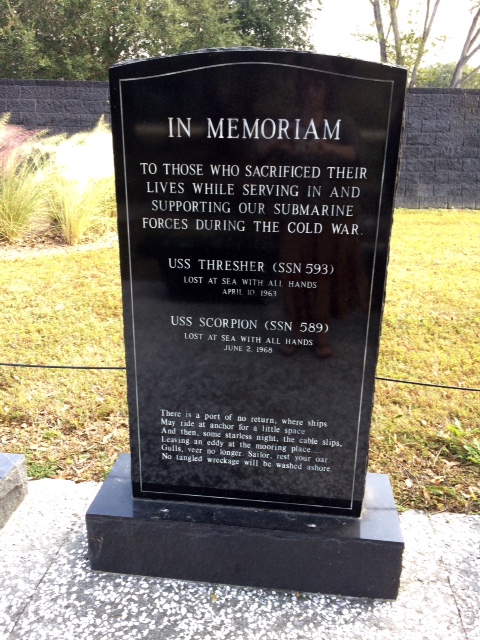