In the late 1800s, Minneapolis, Minnesota, was a bustling and growing city, so busy it had more than one train station.  The largest one, Union Station, sadly is gone, razed in the name of progress, but The Milwaukee Road Depot still stands.
Built in 1899, in its heyday it had 29 trains coming and going every day.  Now it holds a ghostly reminder, sculpted figures depicting its life in days gone by. 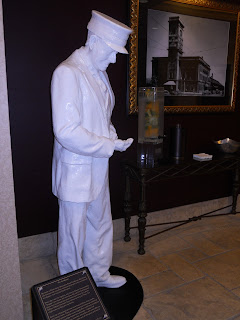 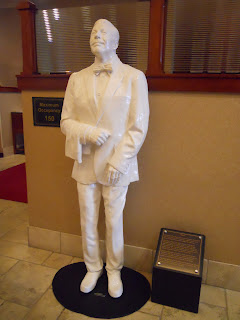 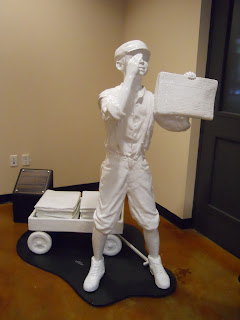 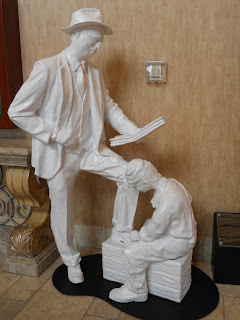 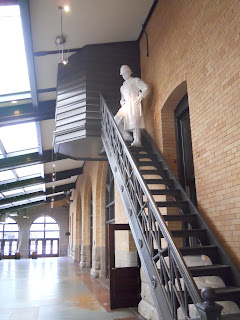 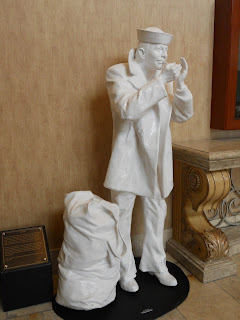 Sailor.  Norman and many, many other young men travelled by train far away from Minnesota farms to serve their country. 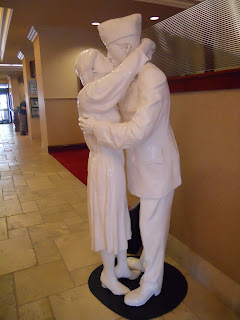 I have been unable to find the name of the sculptor, but was told at the depot that each was based on an old photo and models for the statues were the artist's family members.  She could not recall his name. 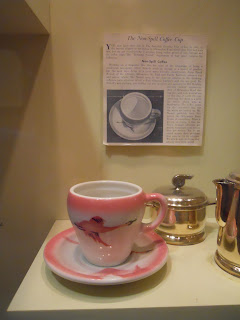 Special spill-proof coffee cups had a lip on the edge to keep the coffee in.
I remember going to pick my dad up from the train station (not this one, a much smaller one in Wisconsin) when he travelled to Chicago for business on the Milwaukee Road train, waiting in the cold and dark for it to arrive. Loud hisses of steam coming out from underneath the beast before the passengers disembarked would have me clutching my mom in fear and excitement.  Daddy usually brought a present.  One time it was a Davy Crocket milk mug, which I still have!
The Minneapolis Milwaukee Road Depot closed in the 1970s and became a dirty, rundown wreck in a blighted neighborhood.  Fortunately, someone saw its potential, and today it is a hotel with historic suites in the old plush offices of the railroad executives.  The gorgeous ornate passenger terminal has been restored and is an elegant banquet room and ballroom.  The train shed becomes a popular ice skating rink in the winter.

Joining Our World Tuesday.  Click here to see what's going on in other places around the world