The U.S. Courthouse in Minneapolis, Minnesota, is one of the outstanding modern buildings in the city according to critics.  It is, to me, um . . . interesting. 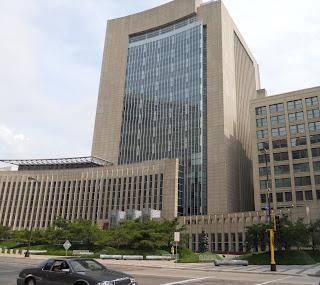 Here it is, several squares put together, one of them curved with lots of smallish windows.  The windows and styles of each square seem different and unrelated to me, but what do I know?  It has won a bunch of awards, and modern architecture isn't my thing!
In front of the building is a plaza full of "Rockmen", by artist Tom Otterness.  The designer of the plaza says the grass mounds represent the drumlins that were formed here during the Ice Age.  They are topped with Jack pines (of all the beautiful and majestic trees in Minnesota, these are scrubby looking things!).


﻿
And here is what is across the street, the staid and glorious old City Hall.  Wonder what it thinks of its modern neighbors. 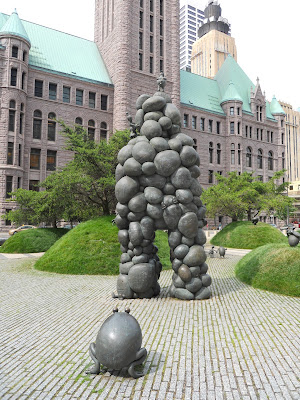 ﻿
The sculptures are whimsical, fun, and totally incongruous with their environment on either side of the street.  Maybe that's the point!
Posted by Cynthia at 6:10 AM