Windows on the Past 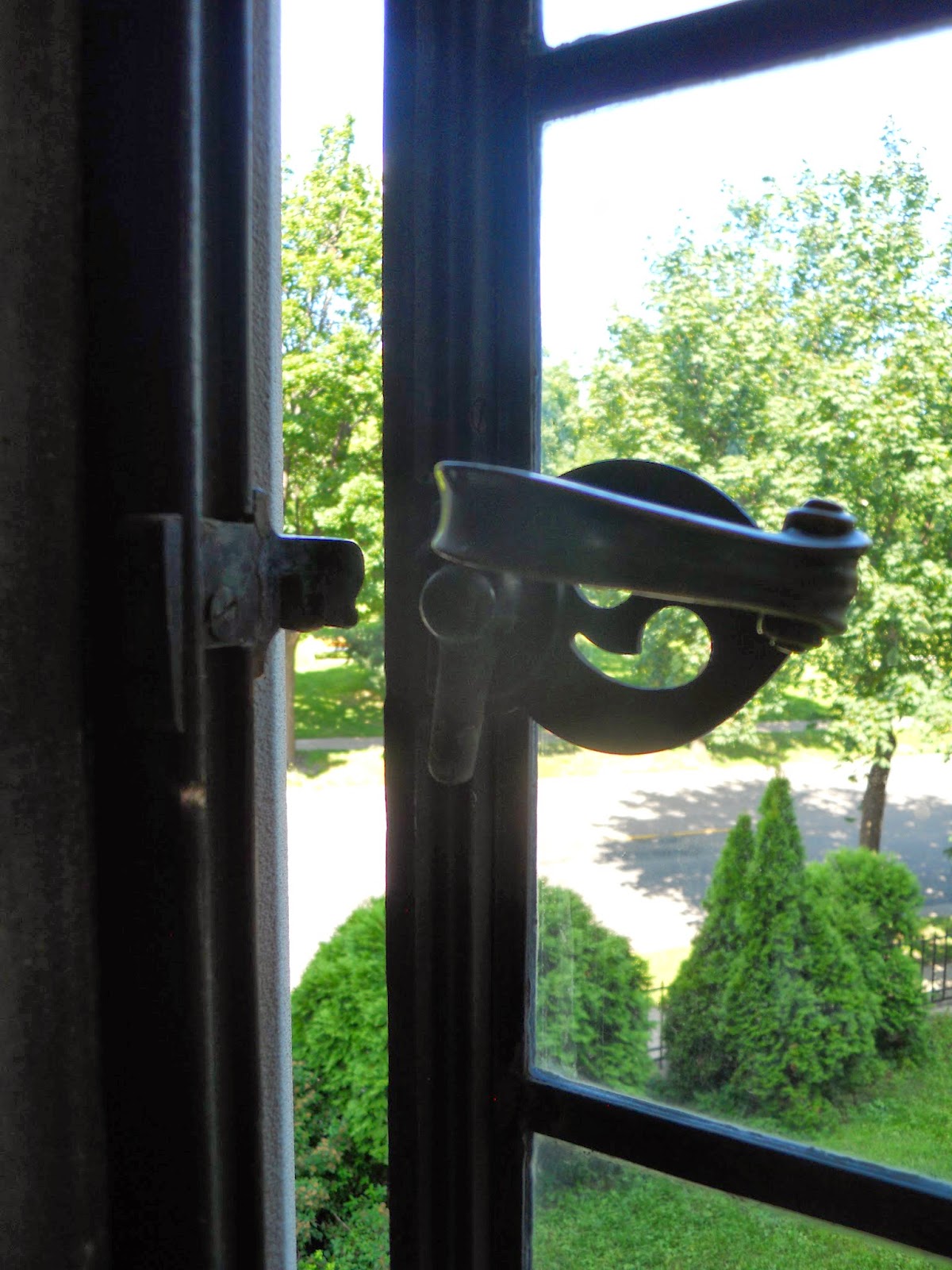 The George Christianson Mansion, built in 1919, now houses the Hennepin History Museum in Minneapolis.  The windows look out on what is now a park and was the Washburn-Fair Oaks Mansion District in the early 1900s.  Christianson invented a process of milling spring wheat that brought him much wealth and made Minneapolis the wheat milling capital of the world. 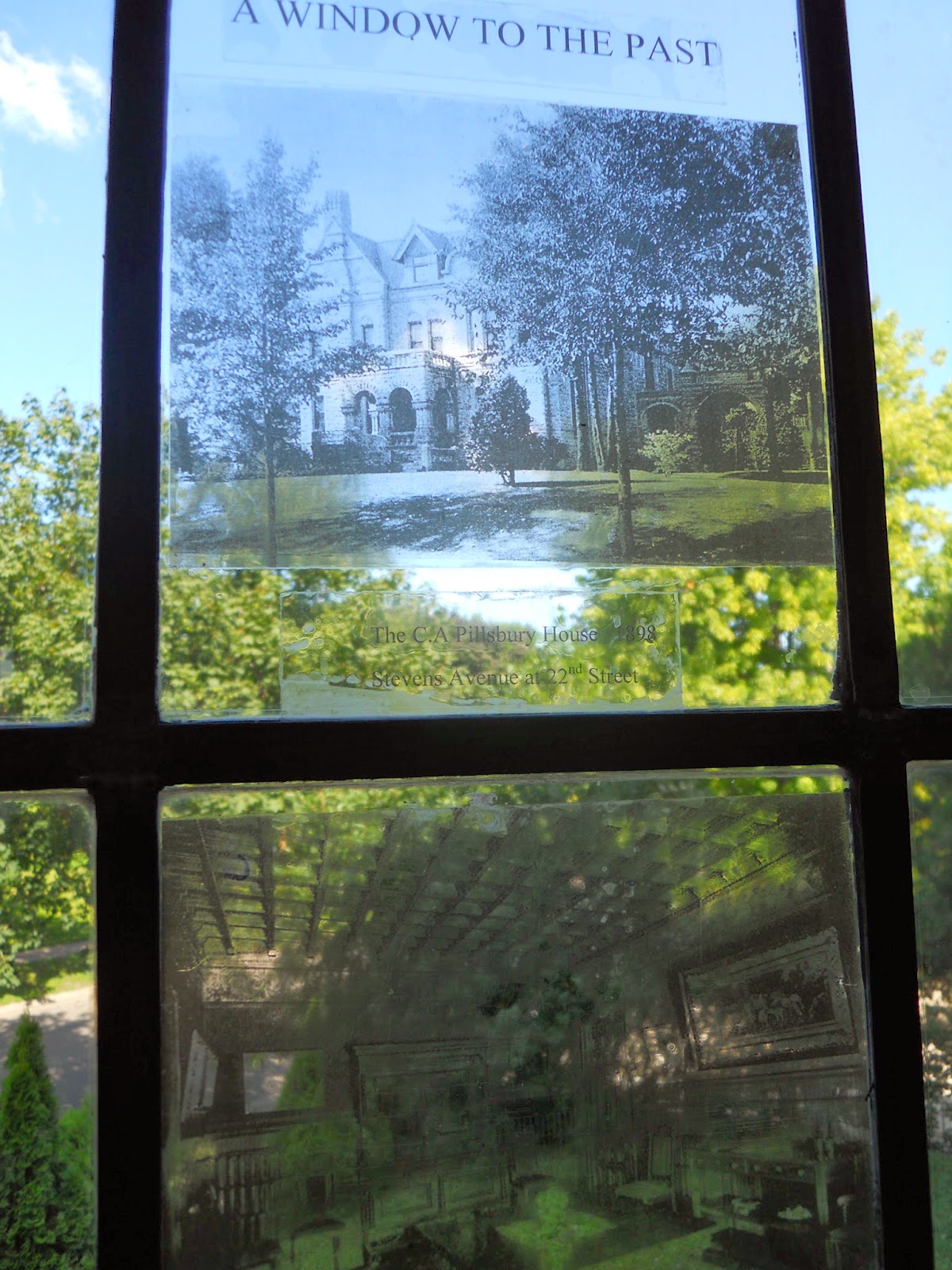 Overlayed on the windows are transparent images of the homes that were here, some of the grandest mansions of the wealthiest families in Minneapolis. 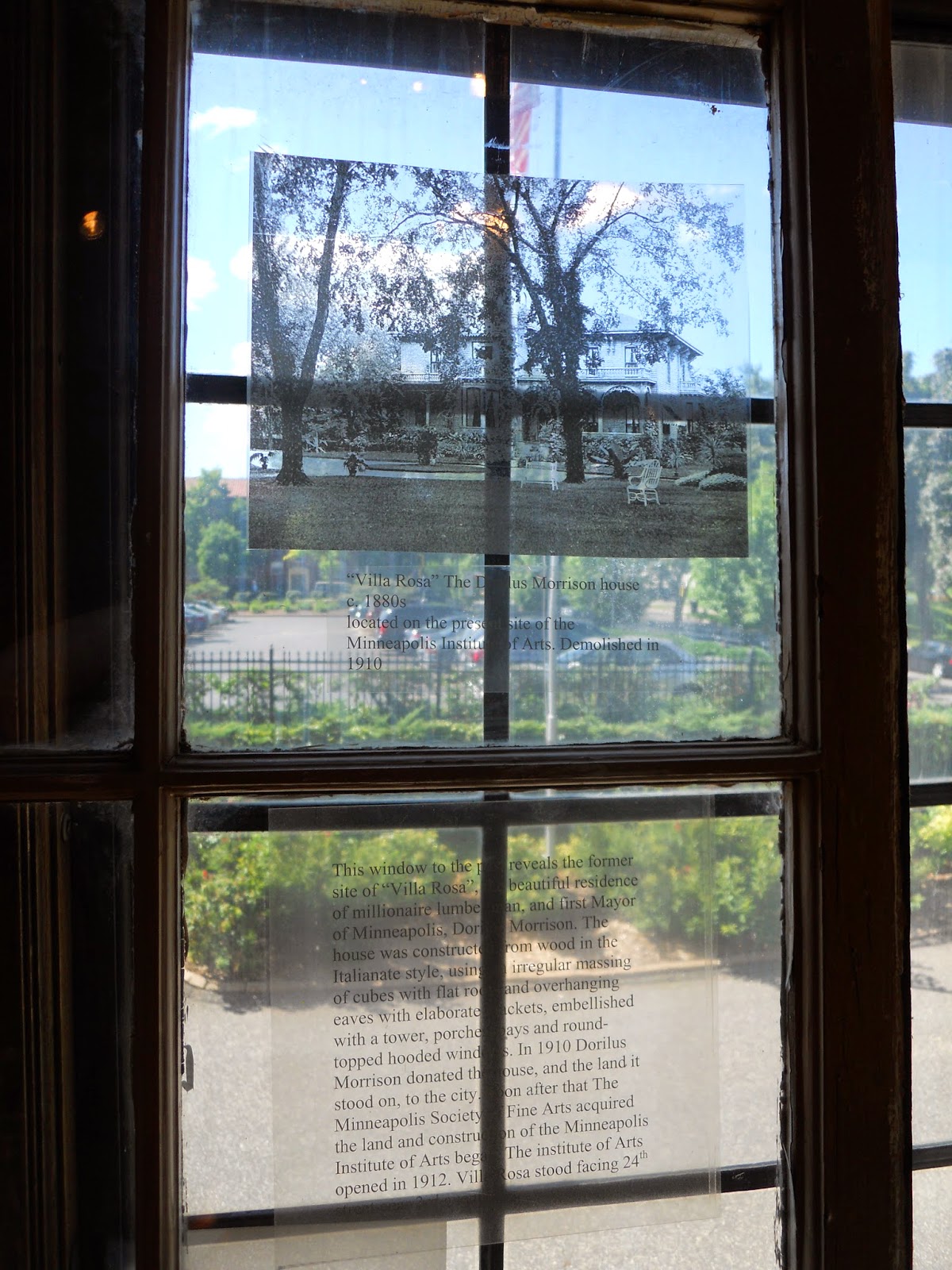 These "windows on the past" show the estates built in the 1850s to early 1900s by barons of the flour milling industry. 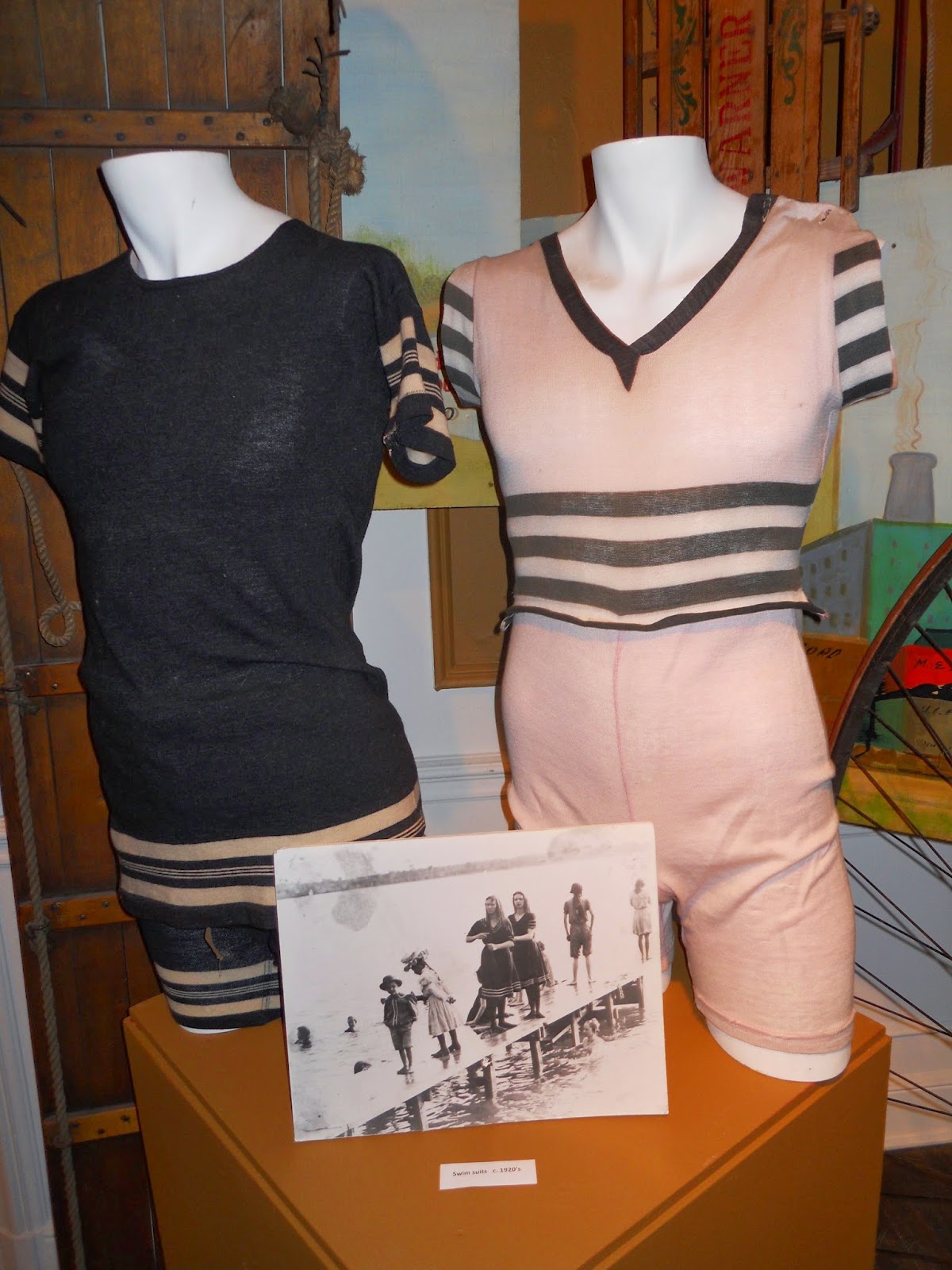 The museum is mainly about the social life of wealthy Minneapolis.  What did the rich and famous of the era wear?  Here are a few examples.  In the City of Lakes, the beaches were very popular and the well-dressed gentleman could enjoy the lakes in one of these swimming costumes. 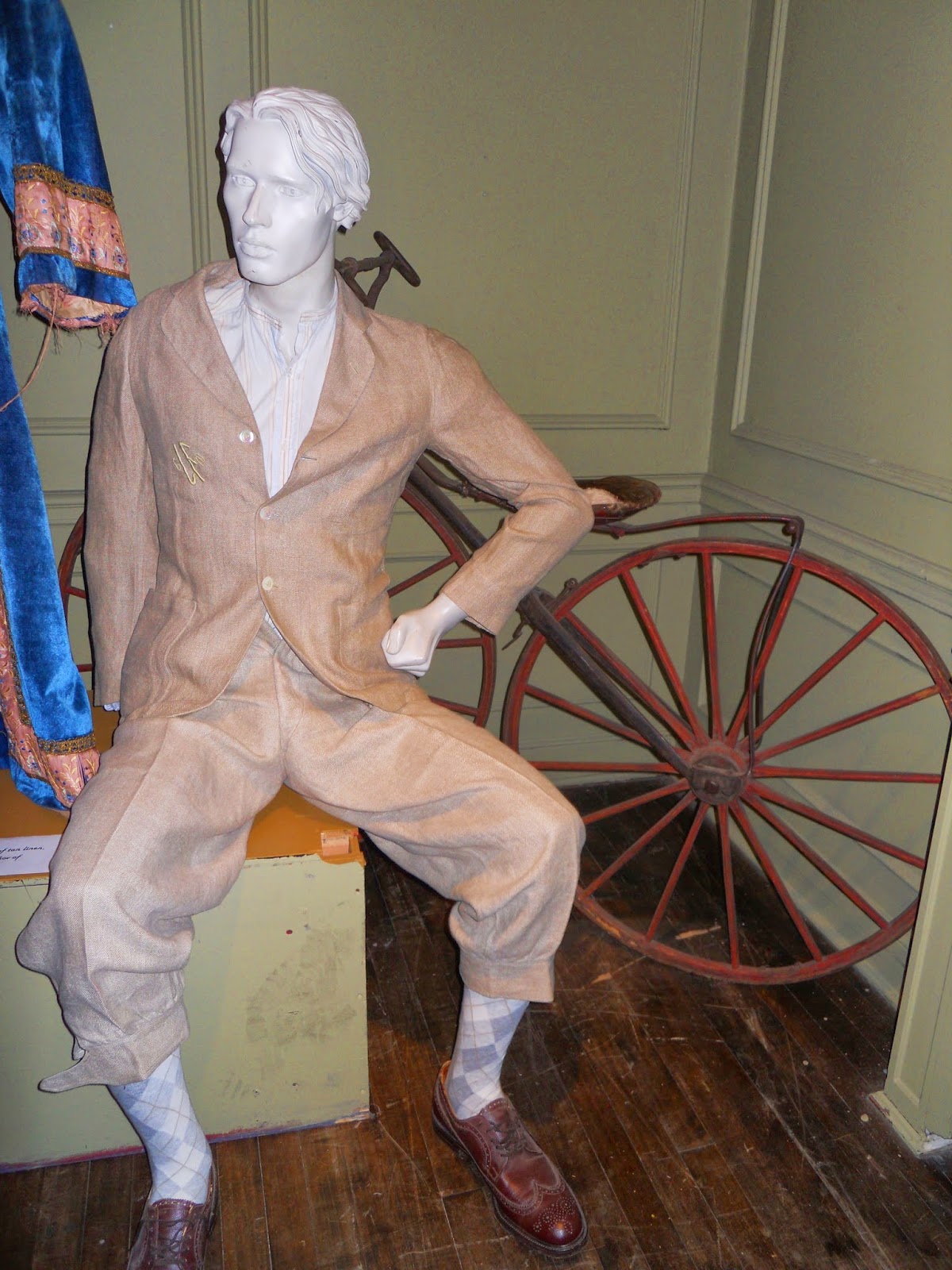 Or, how about a cycling costume of tan linen to wear on a jaunt around the lake on your bicycle with wooden wheels? 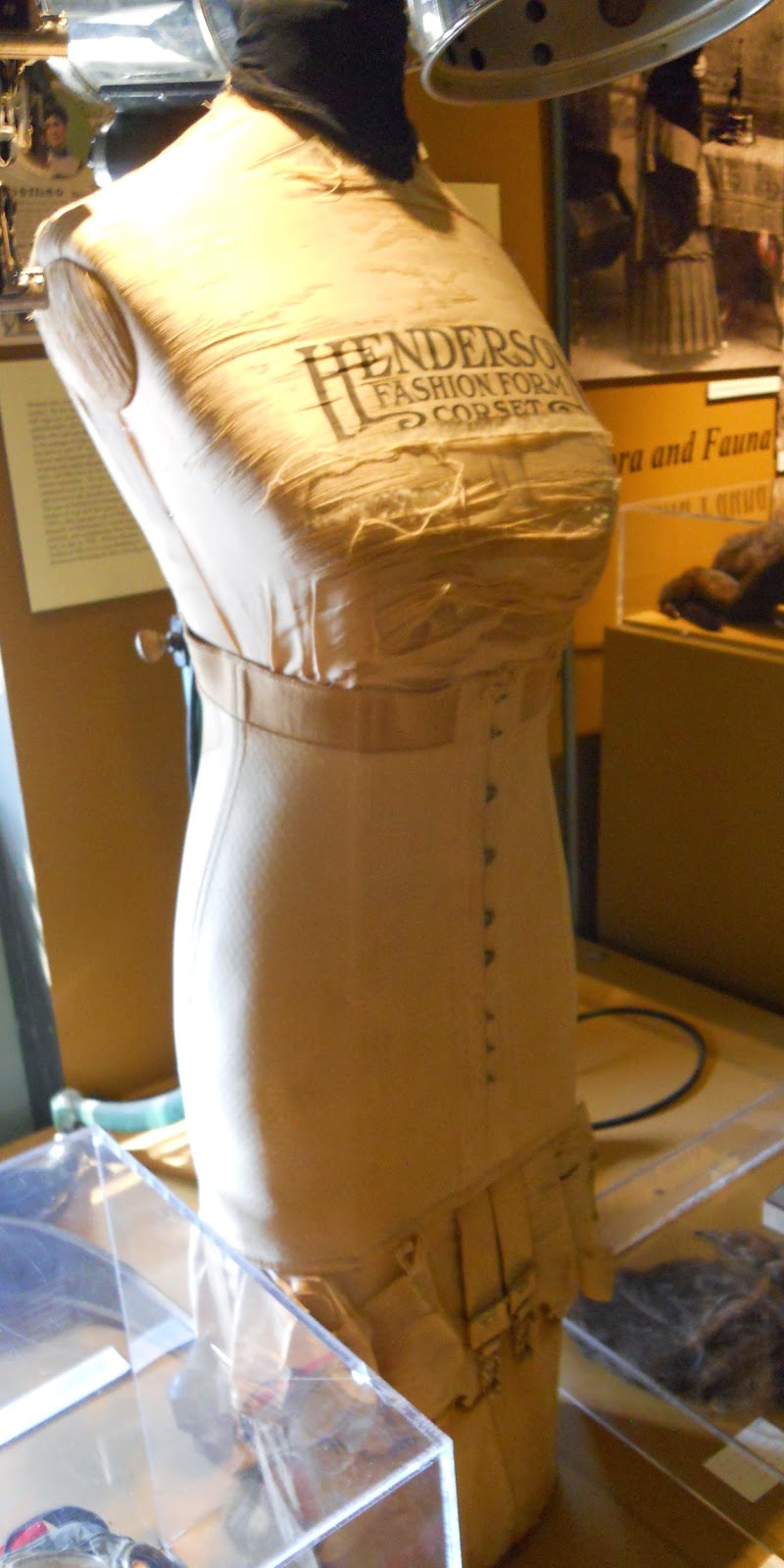 Ladies,of course, had to endure less comfortable clothing to appear well-groomed and proper.  This corset intrigued me because of all the garters and other dangles hanging almost to the knee, as well as the various ways to cinch it tighter. 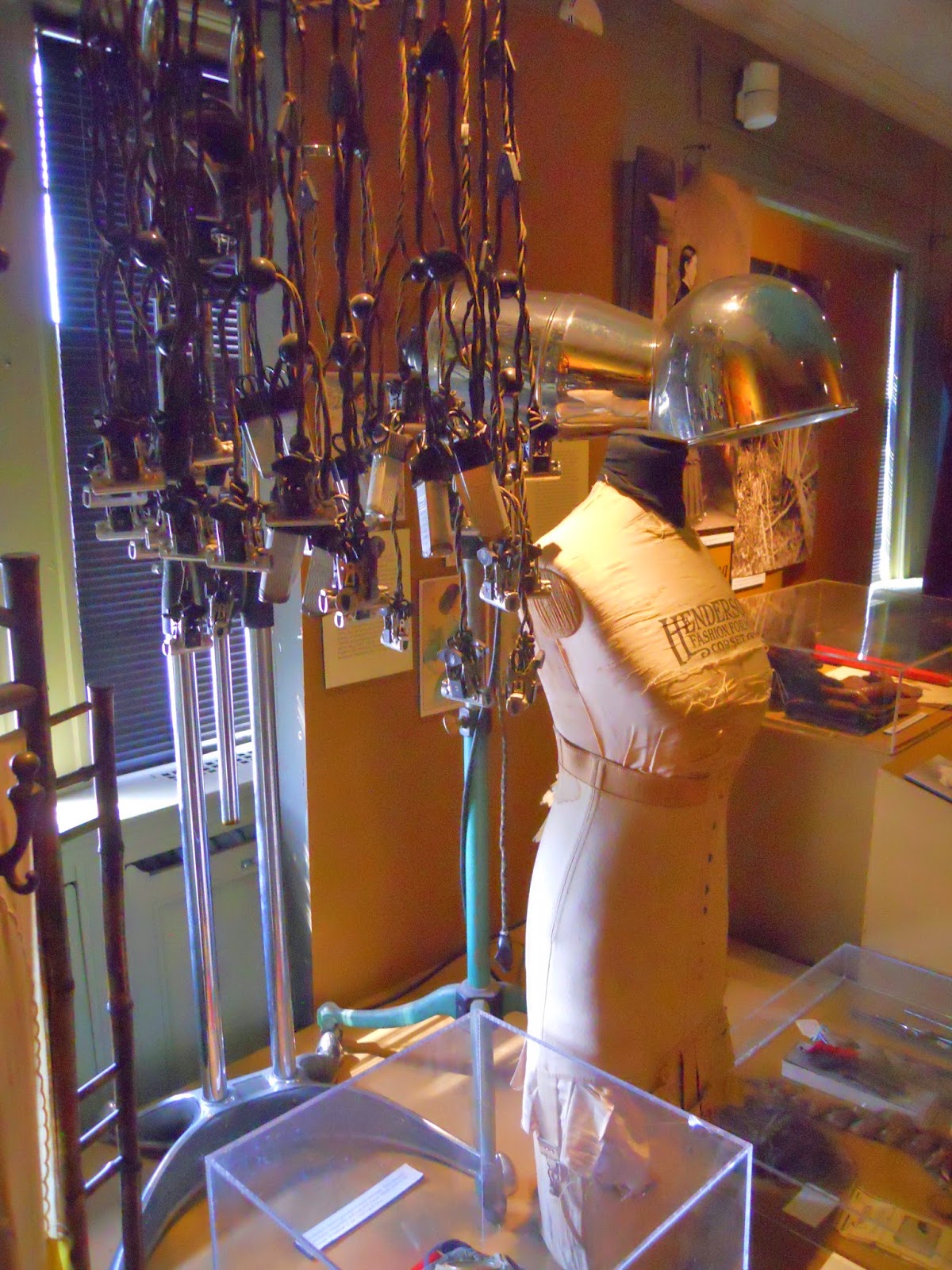 And how about sitting under this electrical contraption with the wires attached to curlers to assure a popular "permanent wave" for your hair? 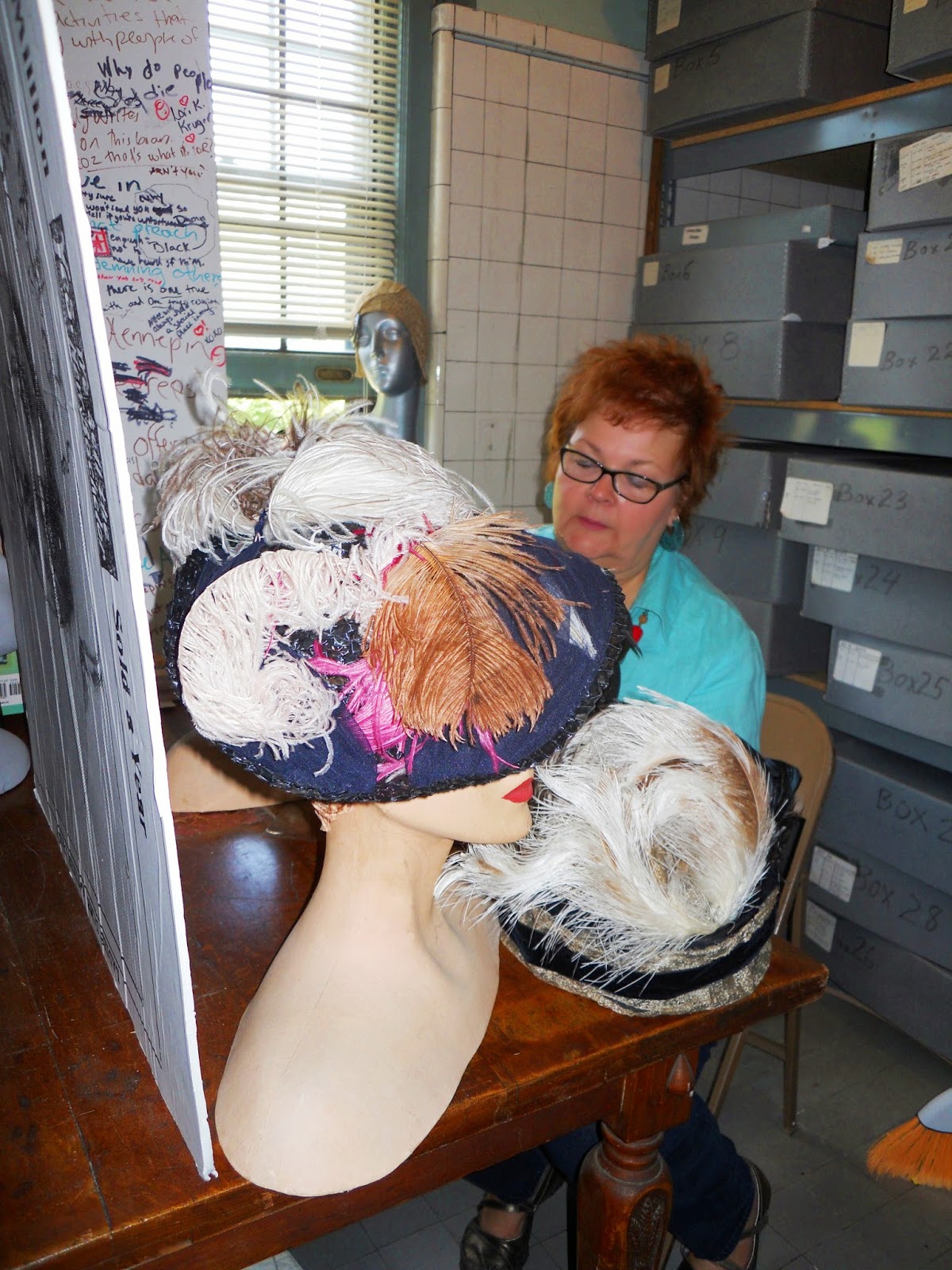 Volunteer Julie has a fun but exacting job.  All the hats from a just finished exhibit have to be dusted and cleaned with tiny brushes and repaired before storing away. 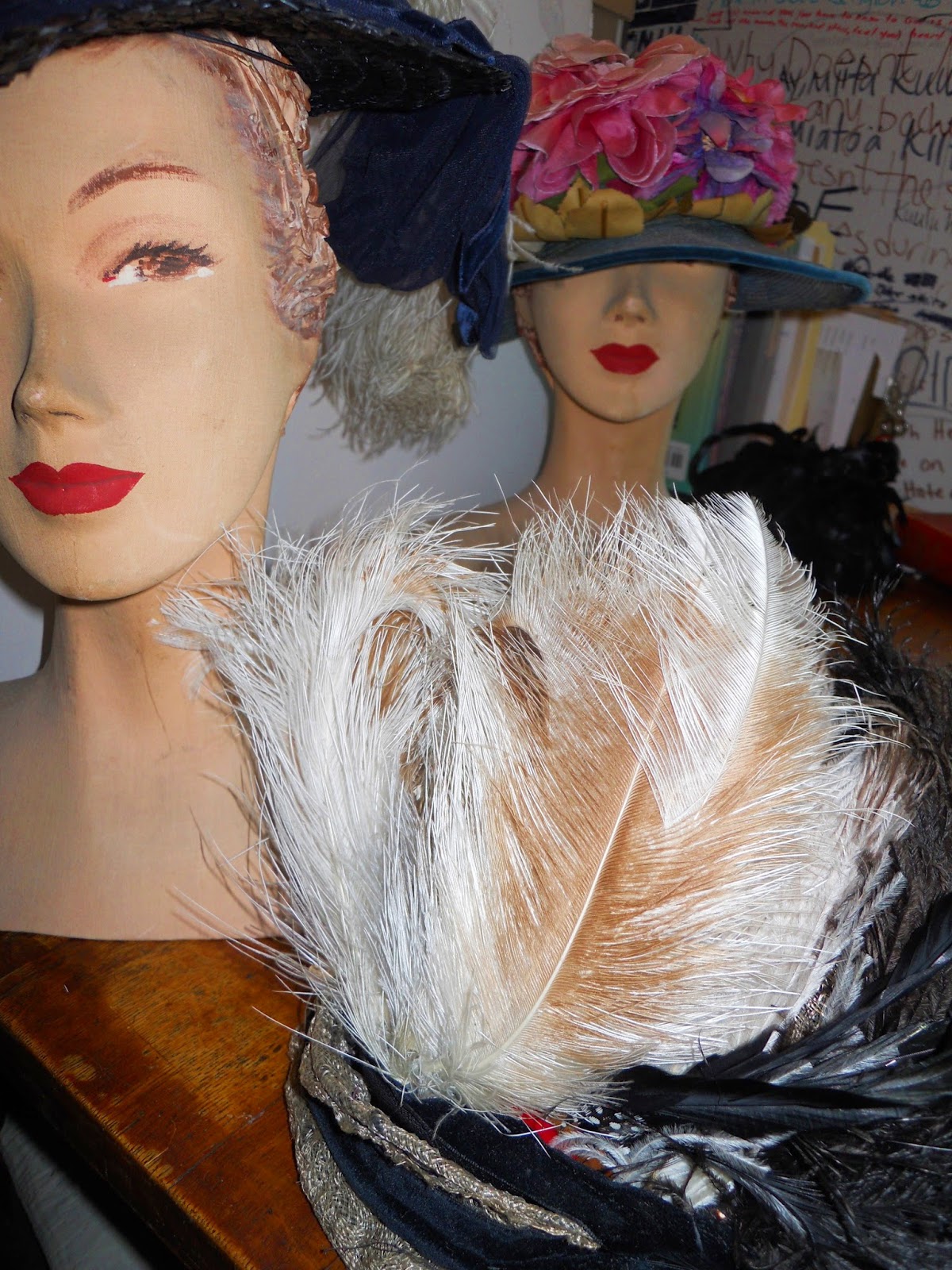 They just don't make 'em like this today (at least, not in the US)! 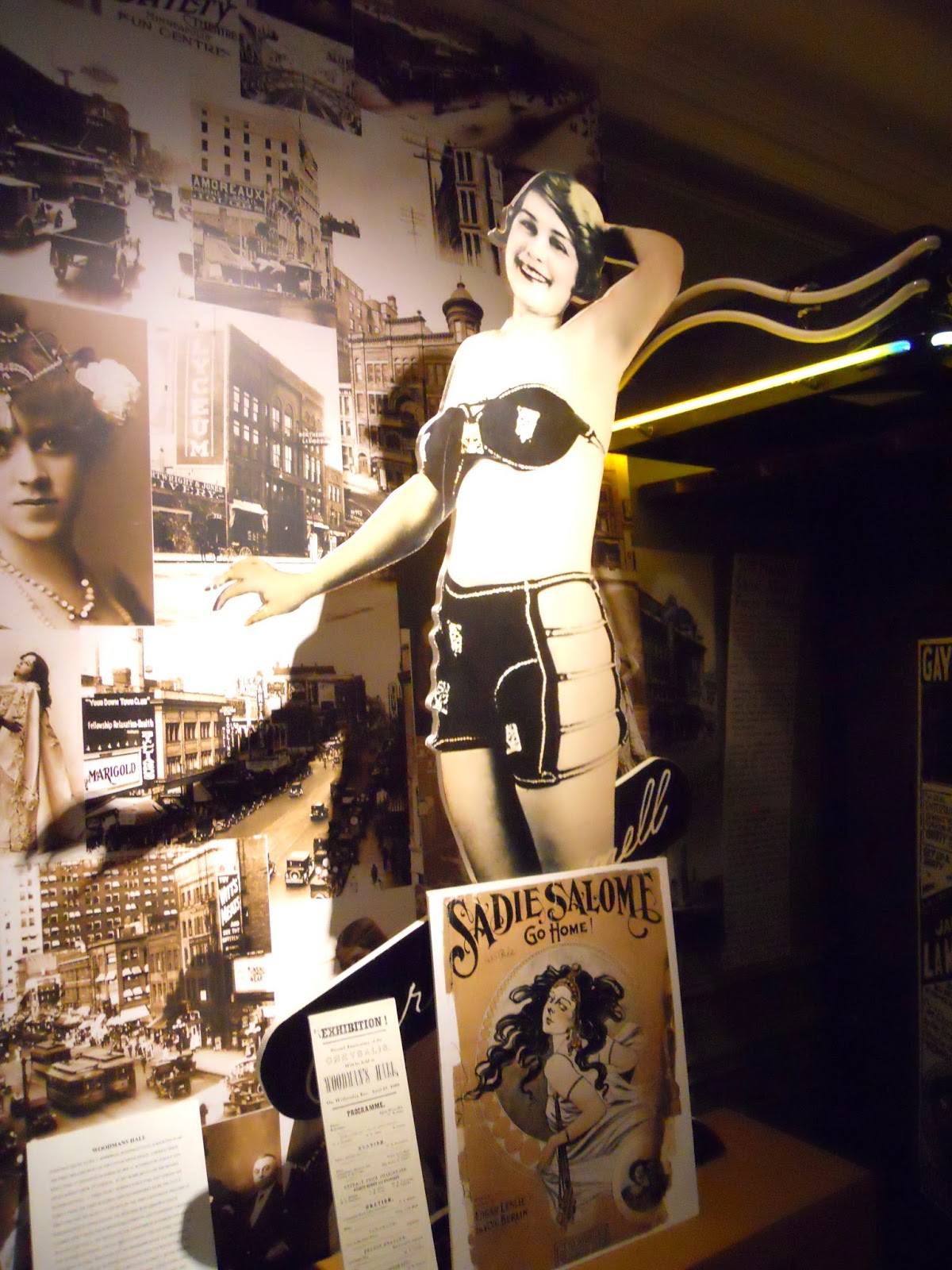 No high society lady would be wearing this number.  This young lady appeared in one of the local theaters one night, and the show was quickly closed down after an outcry of "Indecent!" in the streets and in the press.  Other more wholesome entertainment, such as opera and lyceum shows, was quite welcome and well attended. 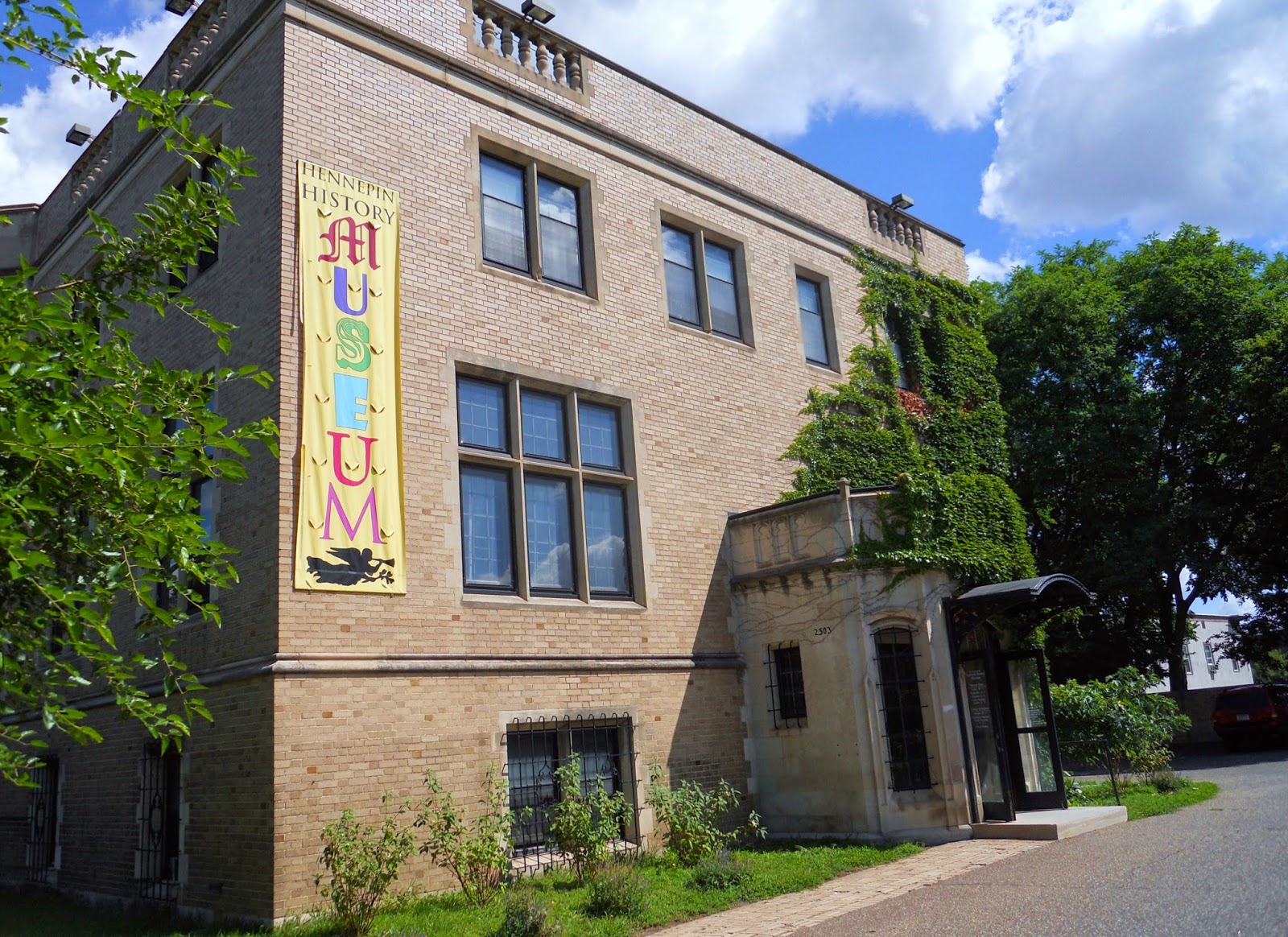 Sadly, Mr. Christenson didn't live to see his grand new home completed.  Neither did his wife or his son.  The home was lived in by the widow of his son, alone but for 7 servants, for the next 40 years, before it became a county museum.
Thank you for visiting my blog.  I enjoy reading your comments and will visit your blog in return.

Joining with Our World Tuesday
Posted by Cynthia at 8:26 AM