Ja, I think maybe I'd better explain the whole lutefisk thing here. The mug in my last post is kind of an inside joke, doncha know? It's made to look like a can of Campbell Soup, the most common brand of soup in America, but no one would ever really eat lutefisk soup. (I don't think!). 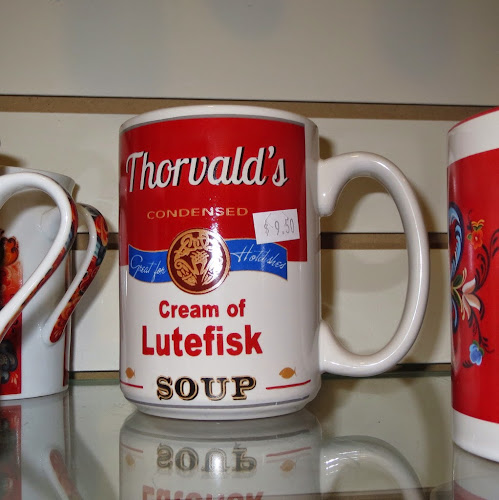 Lutefisk is made by reconstituting dried cod by soaking it in lye. It becomes gelatinous and reminded Scandinavian immigrants of the homeland, I guess. My mom boiled it in a mesh bag that kind of held the quivering mass all together until it got to the table in a large tureen.

Lutefisk is pretty tasteless by itself but it is served with a large amount of melted butter poured over it. Many of us can't get past that the texture and smell of it cooking, however!

Many Minnesota and Wisconsin (and probably Iowa, too) churches still have lutefisk suppers that are extremely popular, often sold out weeks in advance. And some families serve it on Christmas Eve, which my family sometimes did until my grandma's generation was all gone. 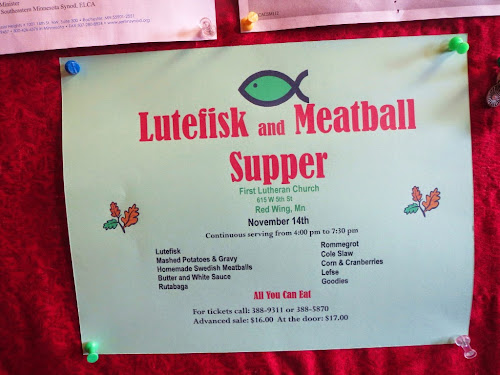 Thank goodness, most churches also serve a variety of other dishes for the non-lutefisk generations. We can fill up on lefse and oh! those meatballs and mashed potatoes!

Prise Herren, it wouldn't be November without a good lutefisk supper in the church basement.

Posted with Blogsy
Posted by Cynthia at 5:17 AM