I saw something tonight I've never seen before. It was getting dark and about to storm and I was looking out the window while I brushed my teeth (doesn't everyone?). I noticed a big swarm of something flying around and around at levels from inches above the ground to above the treetops. They looked like tiny radio-controlled helicopters gone mad.

My first crazy thought was hummingbirds but then one flew close to the window. 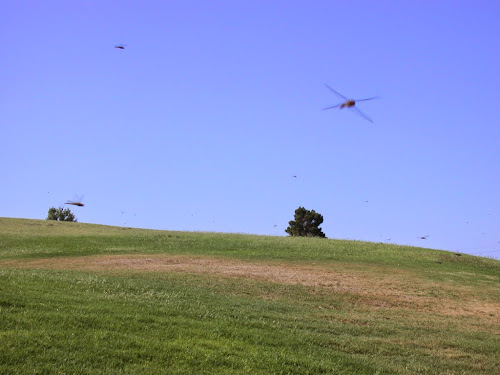 ( I tried to get a photo myself but it was getting dark. I found this one, thanks to the Dragonfly Woman who has a blog here in case you want to know more about dragonflies or report a swarm.)

Apparently dragonflies swarm for two reasons - migration or feasting on a swarm of other insects. I'm pretty sure mine had discovered a dinner buffet over my garden. While they can swarm in groups of 10 to 1,000,000 or more, I'd say my swarm was in the hundreds.

They are still out there circling, 45 minutes later.

What a fun way to end my day.

Posted with Blogsy
Posted by Cynthia at 5:18 PM