When we bought our house four years ago, workmen repairing the foundation pulled out a box of old bottles from underneath.  I’ve never had much interest in old bottles beyond the way light comes through colored ones on the windowsill, so the box sat around for four years with only the occasional thought as to what we should do with them.  Finally, with all the time on our hands during the pandemic, I decided to take a closer look. After all, our house sits on the grounds of the old Maryville Plantation with a history of rice beginning in the 18th century.  Maybe there was a story or two there. 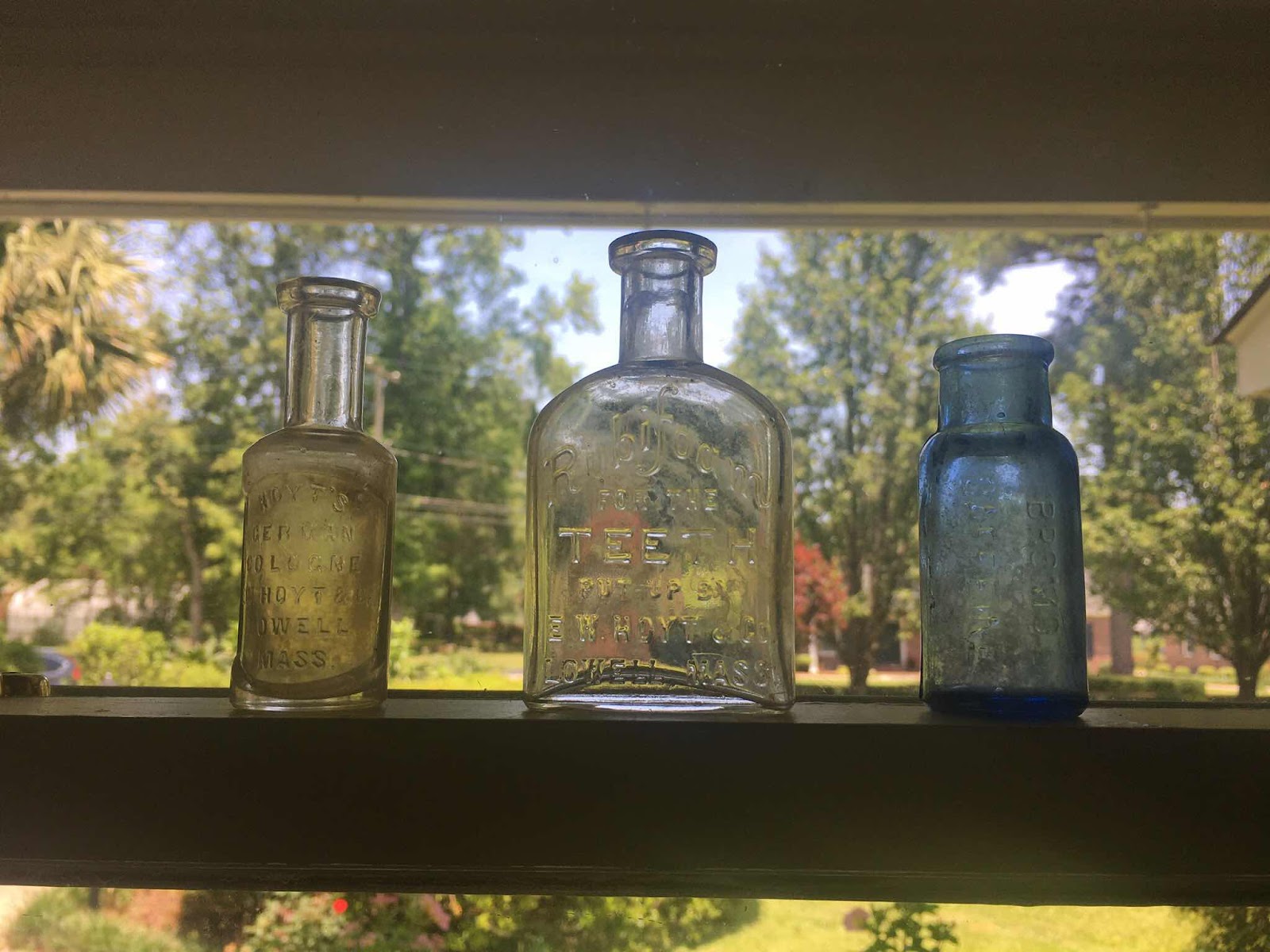 The bottle on the left contained Hoyt’s German Cologne, the one in the center, Rubifoam for the Teeth, and blue bottle on the right says Bromo Caffeine. And therein lies a tale (or two). 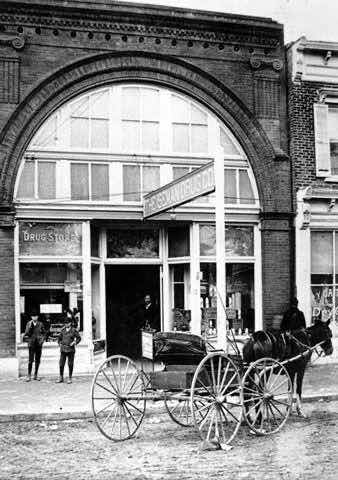 This building in Georgetown was likely where they were purchased.  Now the home of a popular restaurant, Big Tuna (currently closed because workers tested positive for the corona virus), it was originally Iseman’s Drug Store. Dr. Iseman, a physician, sold wholesale and retail drugs as well as stationary, perfume, “fancy goods”, and toilet articles, like Rubifoam tooth cleaner.
Rubifoam was created by E.W. Hoyt in the 1880s and manufactured in Lowell, Massachusetts.  Taking its name from the bright red color of the liquid, it was widely advertised on colorful decorative trade cards and in magazines.
“ 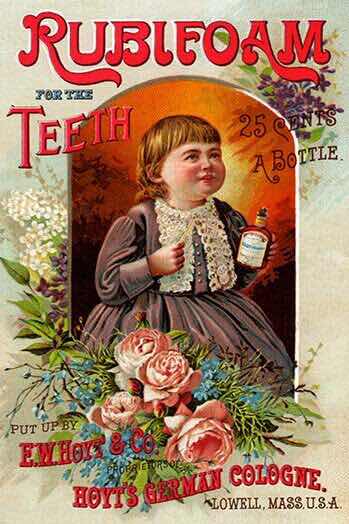 “A Perfect Liquid Dentifrice. Cleanses, Preserves and Beautifies the teeth. Heals and hardens the gums. Leaves a refreshing coolness in the mouth. Imparts a delightful fragrance to the breath."
A 4-inch light purple bottle cost 25c.
Hmm, do you think it stained your teeth red like red Koolaid does! 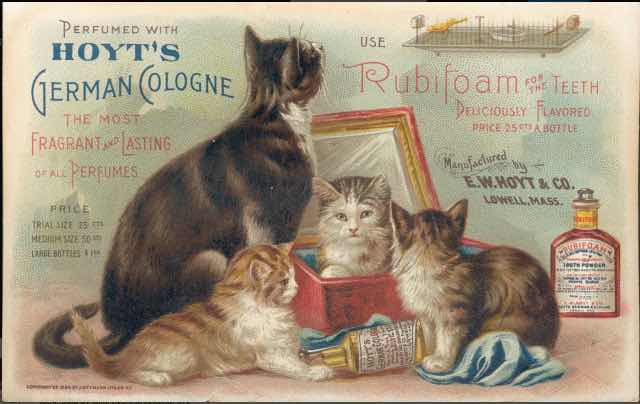 As you can see on the card, the same man invented and manufactured Hoyt’s German Cologne.  That’s the product that made Hoyt famous and by 1877 there was such a demand that he sold the tooth cleaner business to employees and concentrated on the cologne. 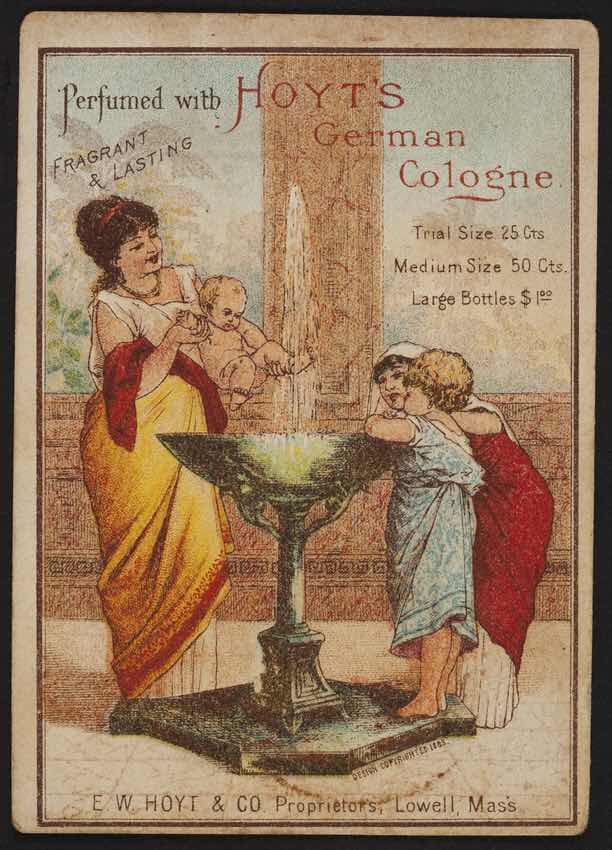 There was nothing German about Hoyt’s German Cologne, Hoyt just thought calling it that would make it sound more cosmopolitan and classy.  It originally sold for $1 a regular bottle, about $22 in 2020 dollars, or 50c for the size in the photo at the top.  Pretty pricey, I think!  The card above and others that advertised both products were scented with the cologne and passed out as advertising to entice buyers.

Bromo Seltzer (blue bottle in the photo above) was invented in 1888 to relieve heartburn and upset stomachs.  When mixed with water, the result was a fizzy drink.  Bromide, its chief ingredient, has a tranquilizing effect which likely accounts for its popularity as a headache and hangover remedy.  Unfortunately, bromide is toxic and the formula was changed in 1975 so it no longer contains bromide.
Here is how it was described in advertising in the 1800s:

“For brain workers. This delightful effervescent salt is an almost certain remedy for the relief of the nervous headache resulting from overtaxed mental energy or excitement, acute attacks of indigestion, the depression following alcoholic excesses, the supra-sensitiveness of chloral, morphia, and opium habitues, and with ladies the headache and backache of neurasthenia, hysteria, dysmenorrhoea and kindred disorders. A great boon and prompt source of relief in almost all cases of headache and distress attending mental fatigue and physical exhaustion, it commends itself especially to physicians, teachers, clergyman, lawyers, merchants and others following professions or pursuits requiring nerve energy subjecting to mental strain.“
Wow!
And this catchy little tune for the ladies:
With nerves unstrung and heads that ache.

The other bottles in the box weren’t as interesting as these three.  Many were chipped or even smashed, stained with questionable contents, and have gone to their final resting place at the recycle center.  Each bottle above is worth about $12 on EBay or Etsy but these three will remain on our windowsill to remind us of those who lived here before us. 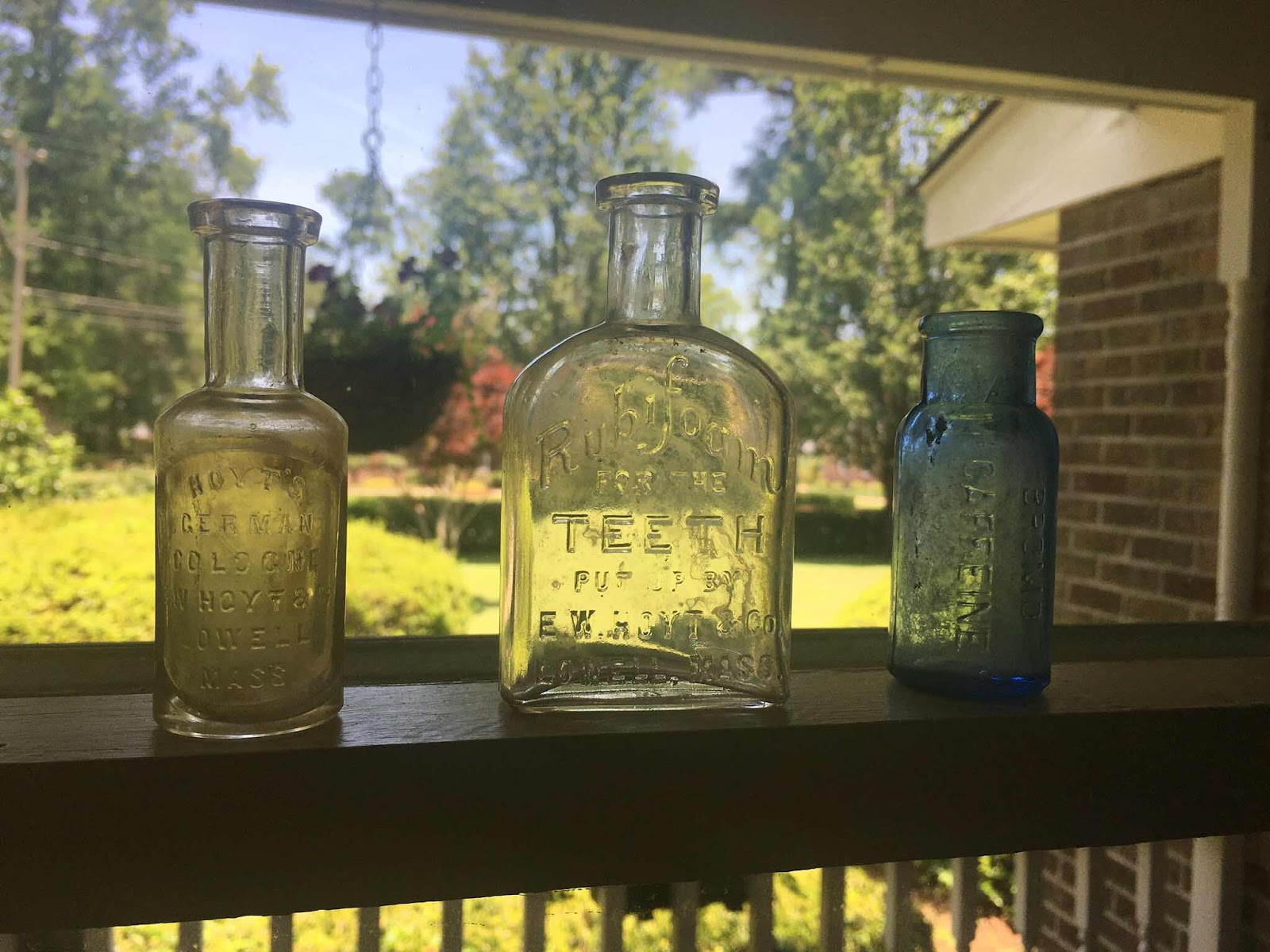