It’s been a while so I thought I’d put up a few photos so you know I’m still around.  As we live in one of the states with the soaring number of Covid cases, we don’t get out much beyond a walk in the neighborhood or, once in awhile, a very early one on the beach where it’s turtle nesting time.  I’ve shown their nests before but recently we came upon something called a “false crawl”. 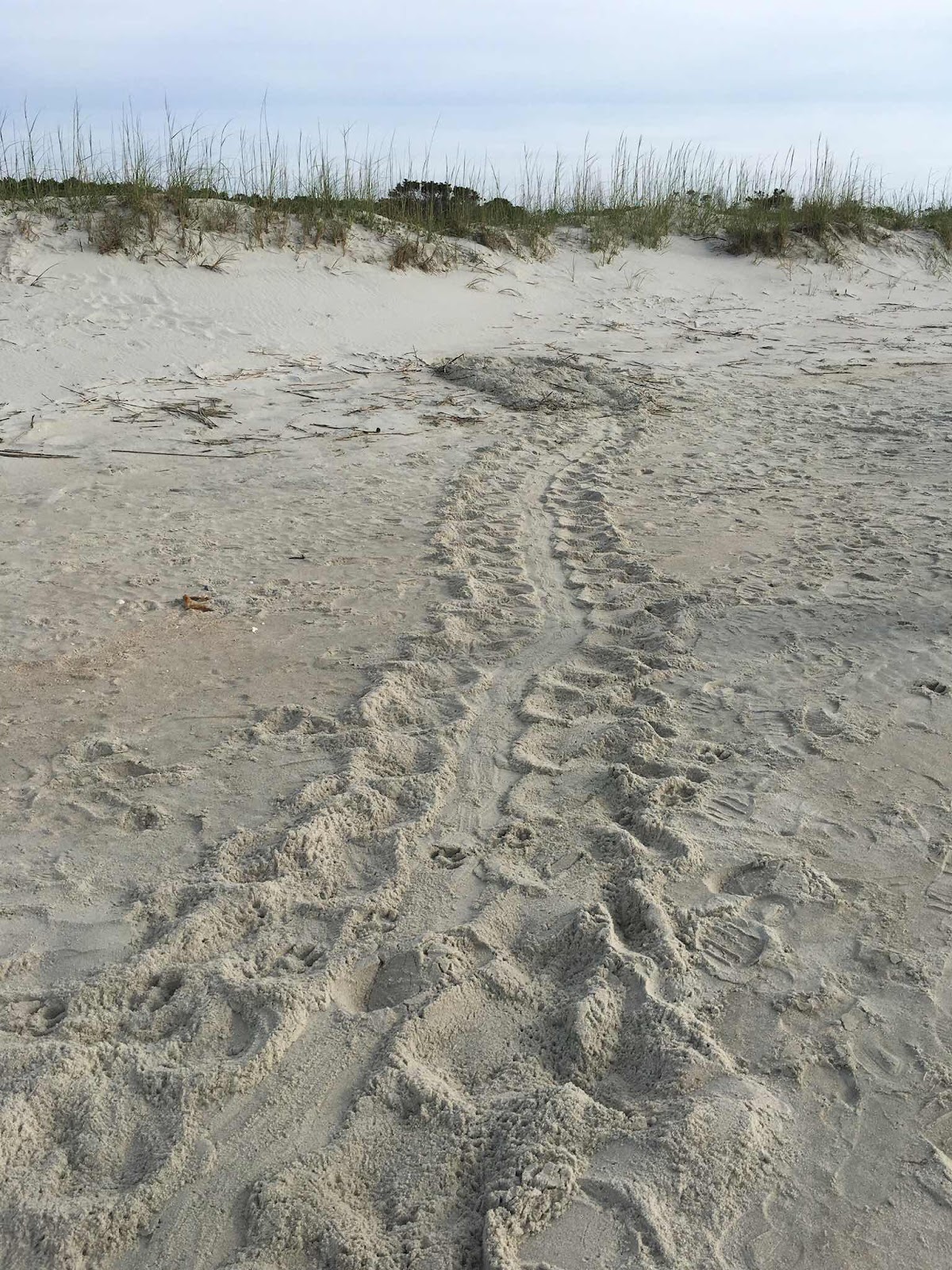 That’s where a female turtle comes up out of the ocean at night and heads up the beach toward the dunes, looking for a place above the tide line to lay her eggs.
If not interrupted, she will dig a hole and deposit about 120 eggs, cover them, and make her way back to the water.  The eggs will incubate in the hot sand and then 55-60 days later, they will hatch.  The babies will dig their way out of the sand and follow each other in a long line down to the water, to begin their lives in the sea.
However, if something interrupts the mother at nest building, if she hears a dog bark, sees the flashlight or camera flash of someone walking the beach, or a yard light or even interior light from a house, she will abandon her efforts.
In the photo above you can see her path toward the dunes and below, the nest she began to dig. 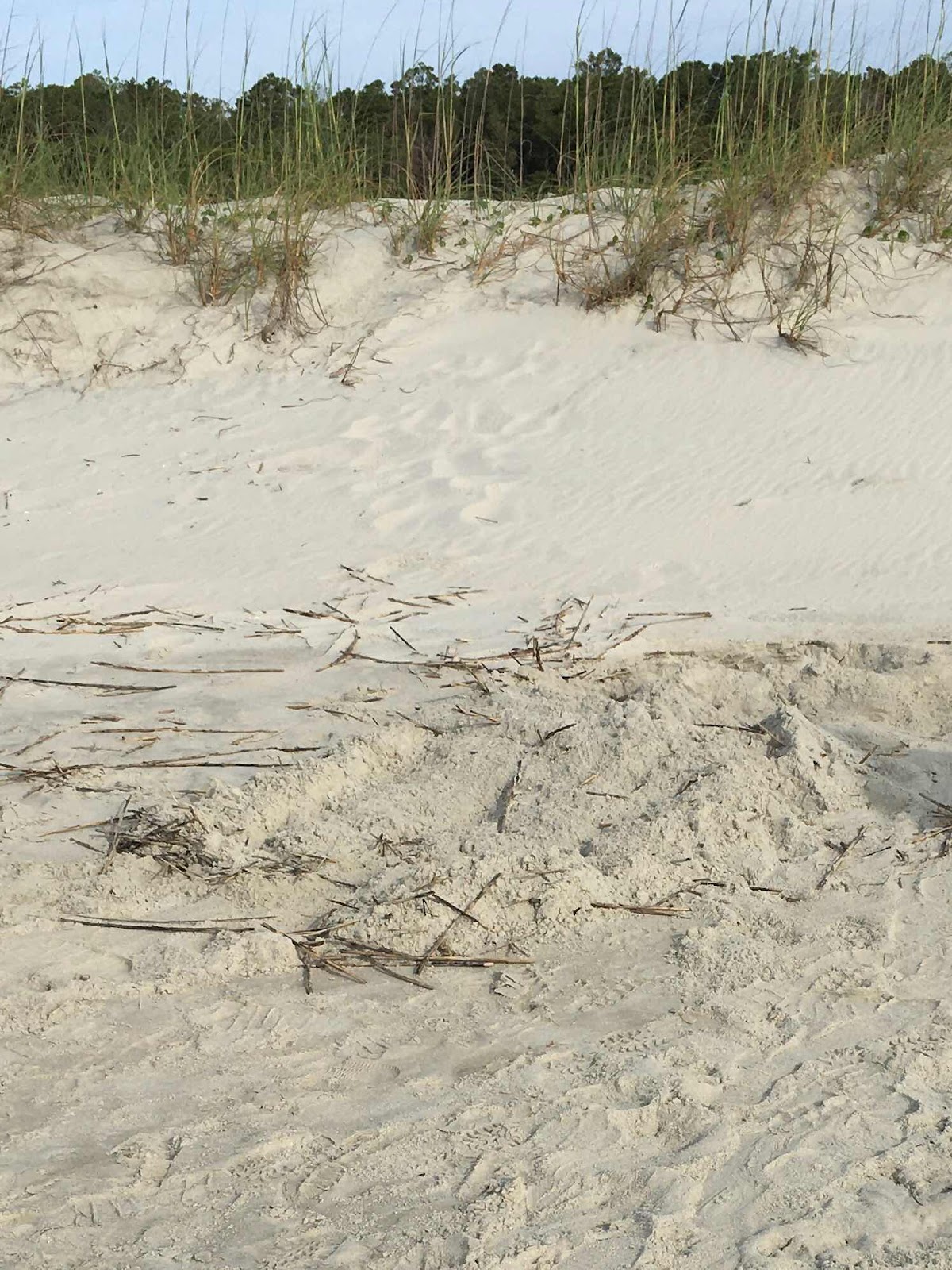 This nest was not finished, abandoned early in her attempt. 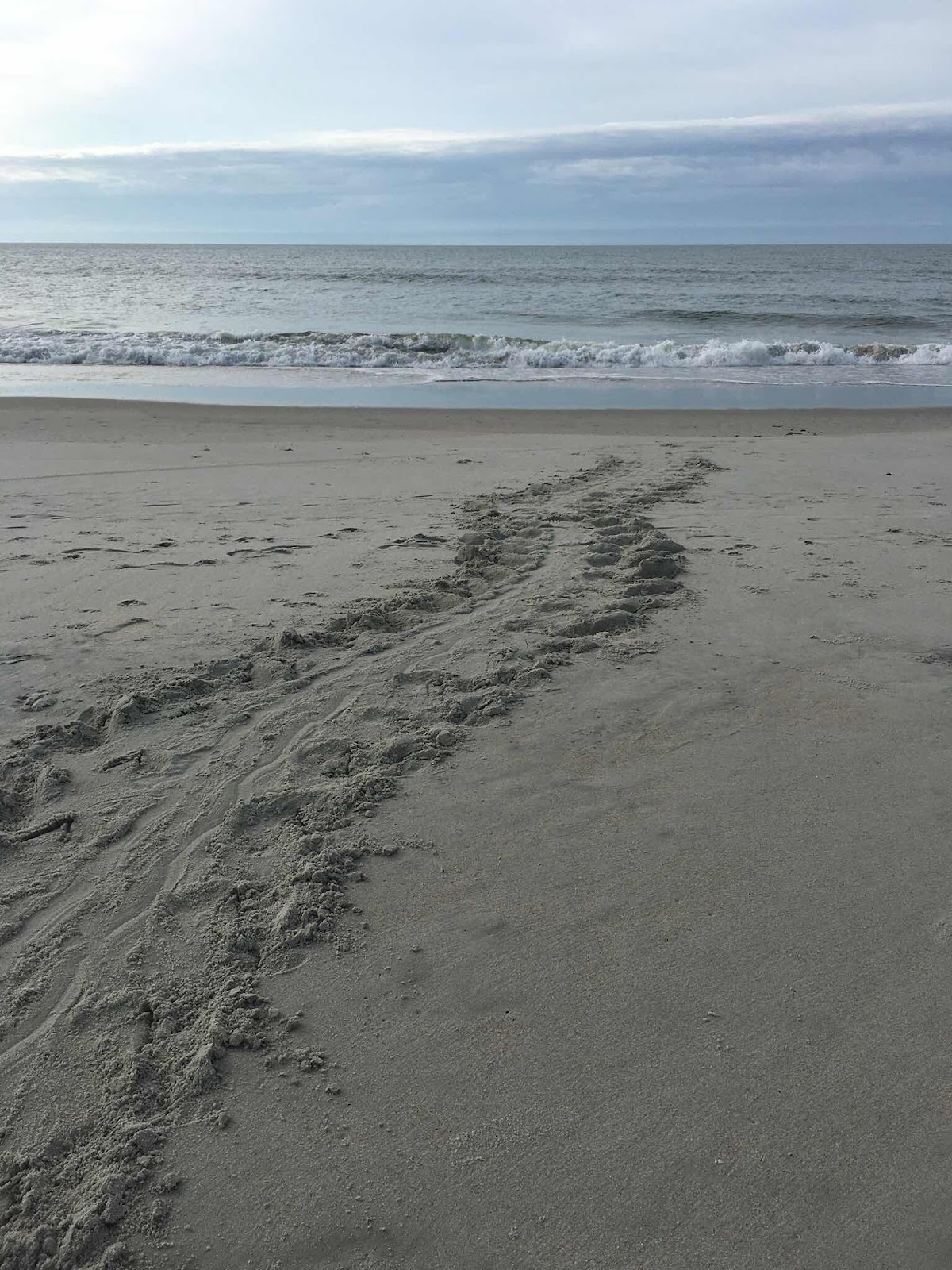 And here, her return path to the sea.  The outer marks are her legs and feet and the line down the middle, her tail.  It takes an enormous effort for a sea turtle to move this far on land and any attempt that is abandoned reduces her chances of making a successful nest for the season.  Sea turtles are endangered so every successful nest is precious.  They are protected animals and it’s illegal to have any lights on the beach at night during turtle nesting time, May - October.  But, people don’t always obey the law.
🐢   🐢   🐢
A few more photos ...

Great blue heron with his eye on the fishing pole to the right
He will snatch the bait if given half a chance!

Anhinga drying his wings on a rice gate structure
Unlike most water birds, anhingas don’t have oil glands.  Their feathers get soaked with water and the weight helps them submerge to fish, swimming along with only their heads above the water.  Then in order to fly they have to dry their wings.  Their nickname is “snakebird” and I’m sure you can see why. 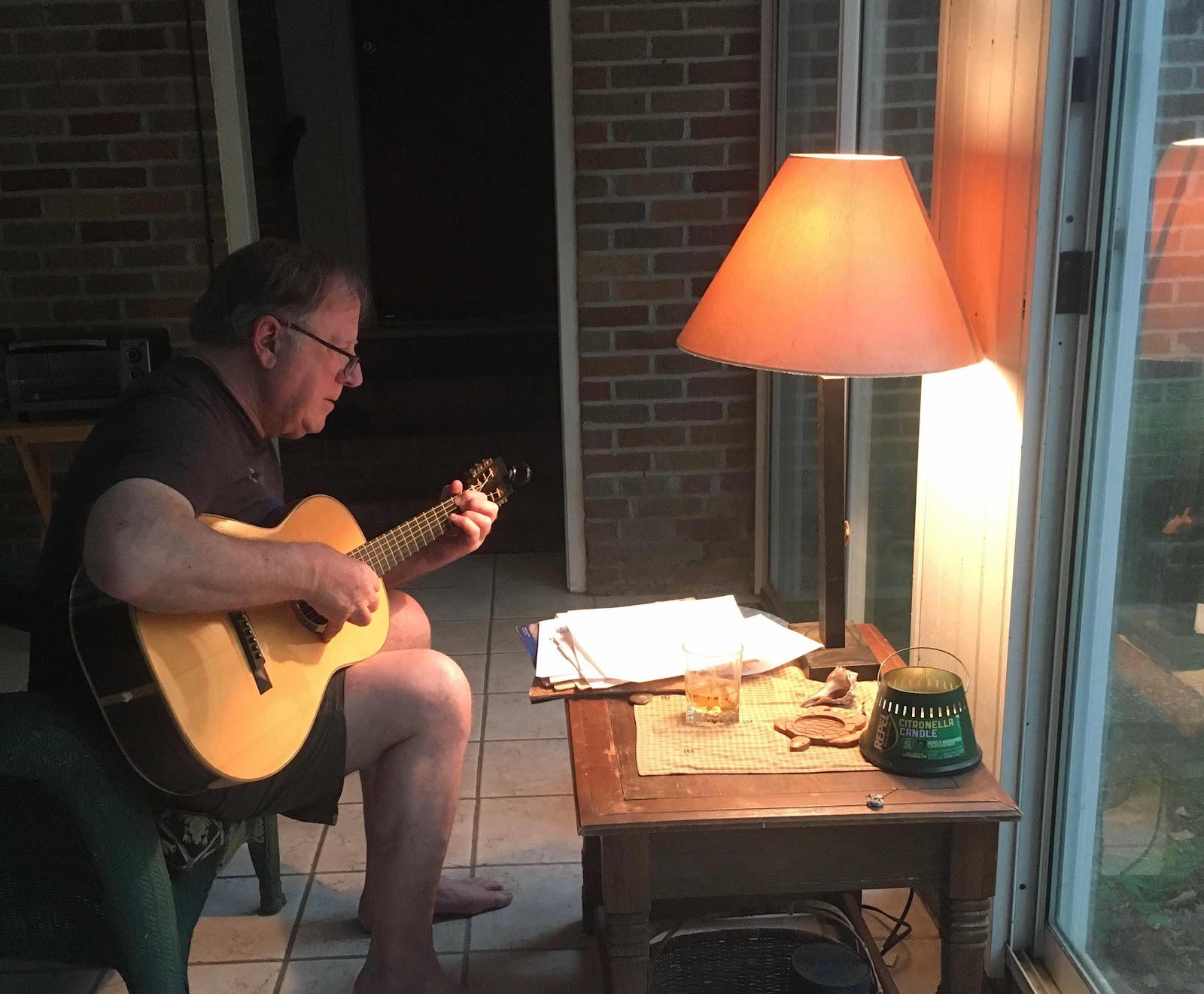 The Writer giving his nightly concert from the sunroom
A gift of Covid, sheltering-in has provided us both with extra time to pursue things somewhat neglected when we could travel — music for him, art for me.  The music brings me back to the times when we lived in the Appalachian Mountains without electricity and I would often fall asleep to the sweet sounds of him singing and playing the folk songs we both loved. 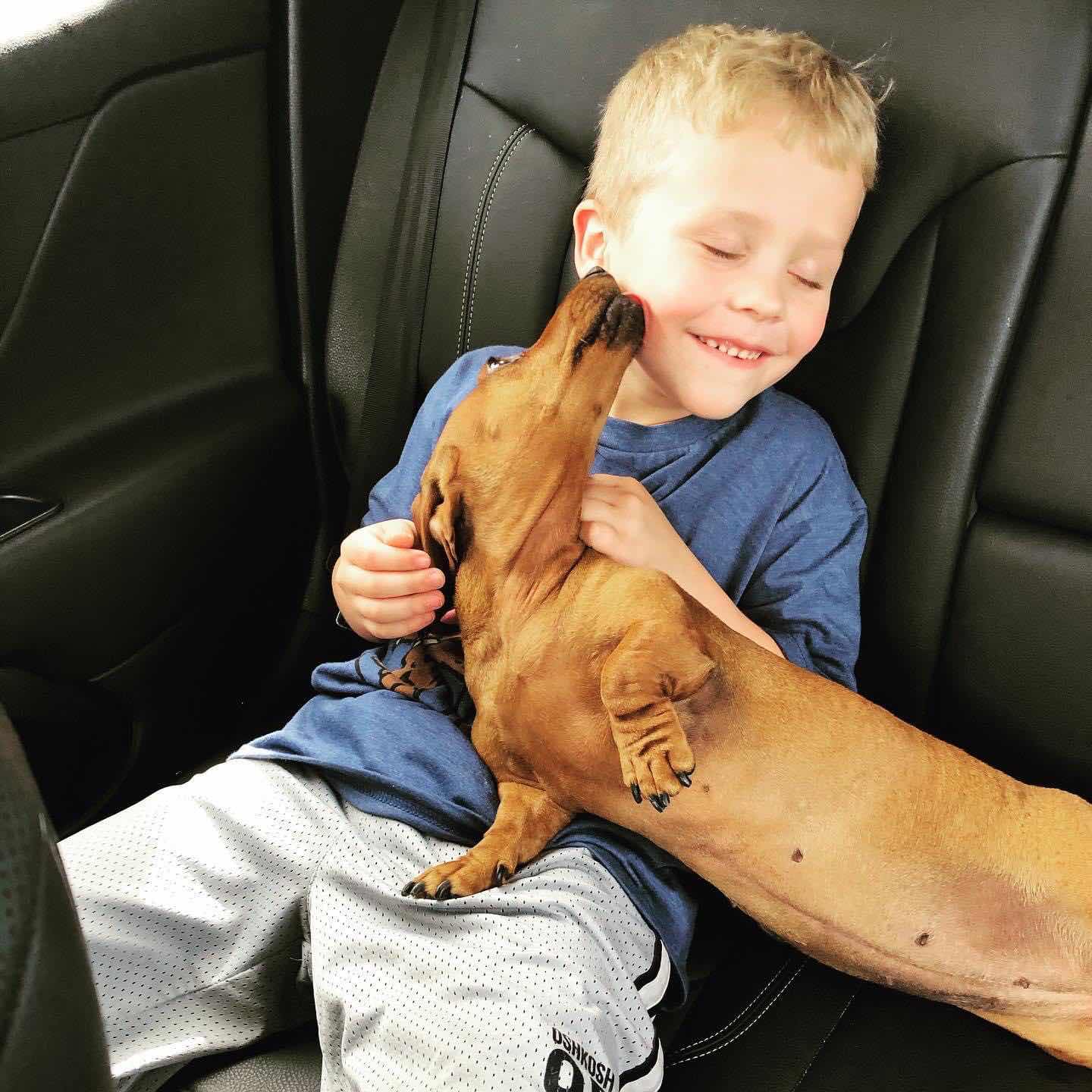 And last, a photo of Mason to make you smile,
a happy dog-and-boy reunion after a day apart.
Posted by Cynthia at 7:54 AM