In 1980 a Minnesota coach led the US Olympic Hockey Team to a gold medal victory over the highly favored Russian team in an upset that became known as the "miracle on ice." With several Minnesota hockey stars on the team and a coach born and raised in St Paul, you can imagine the excitement in Minnesota. 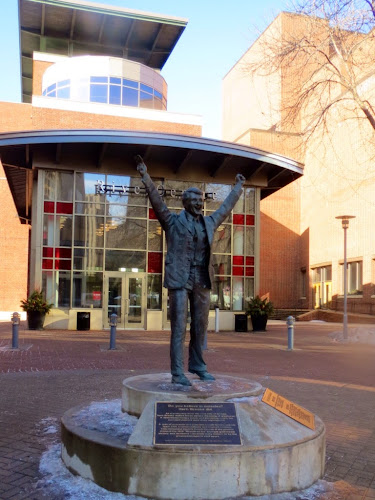 The coach's name was Herbert Paul Brooks, Jr. He played college hockey for the University of Minnesota Gophers and later coached them to three NCAA championships before signing on as the coach of the 1980 Olympic team.

Disney made a movie of the story, called simply "Miracle."

Tragically, Brooks was killed in a one car accident just north of Minneapolis in August 1983. He fell asleep at the wheel returning home from the U.S. Hockey Hall of Fame Golf Tournament in Biwabik, Minnesota. He was just 66 years old. I remember hearing with shock about the accident on the radio and the speculation that it was Coach Brooks who was driving.

In 2004, a statue of Herbie was erected in St. Paul's Rice Park across from another of St Paul's famous sons, author F. Scott Fitzgerald. He lifts his arms forever in joy and triumph near the old Civic Center where his team held practice.

Brooks aimed to inspire his teams to greatness with words of wisdom his players called "Brooksisms". Some are appropriate only for the locker room, but here are a few of his gems: 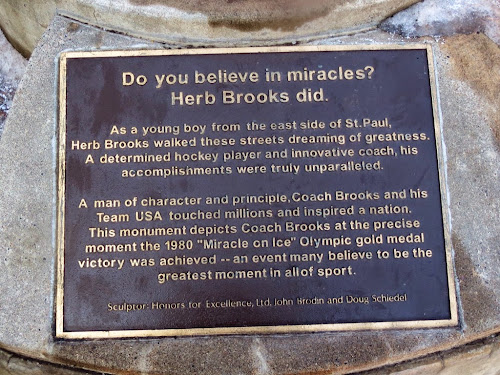 Posted with Blogsy
Posted by Cynthia at 7:33 AM