"A good traveler has no fixed plans, and is not intent on arriving."
Lao Tzu
﻿

One of the things I enjoy about each trip I take is coming home and researching further what I saw.  The most fun "finds" are the places I didn't expect to go and knew nothing about.  In London last March, it was raining and snowing, and our guide for the day, Laura, led us into a plaza beside St. Paul's Cathedral for a "tea and a pee".﻿
﻿ 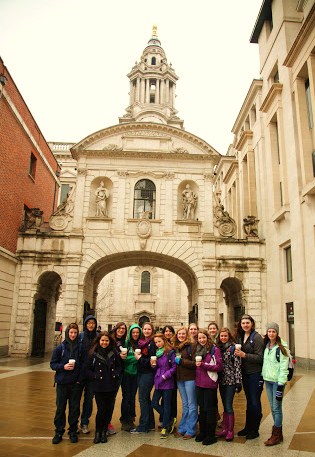 I'm sure she gave us some history of the huge gate behind us, but if she did, I couldn't hear (there were 32 of us and a very short guide somewhere in the middle) (AND, I confess, we were pretty intent on the promise of hot tea and a warm-up in the basement of St. Paul's).  Only later did I find we had posed for a photo in front of Temple Bar, the only old gate to the city (originally there were eight) that still exists!
Temple Bar was completed in 1672 and is believed to have been designed by Sir Christopher Wren.  It was at the spot where Fleet Street met The Strand and stood, beginning in 1293 as a simple bar across the road, until the 19th century.  By 1878, it was impeding traffic flow and dismantled, later to be re-erected as the gate to a private home.  In 2004, it was again disassembed and moved to its present home in Paternoster Square beside St. Paul's.
In its original spot, the Temple Bar was used to display on spikes the heads (and other body parts) of executed traitors.  Original statues at the top depict Charles I, Charles II, James I, and Anne of Denmark. Other statues were lost in the first removal from Fleet Street and have been recreated, including the Royal Beasts. 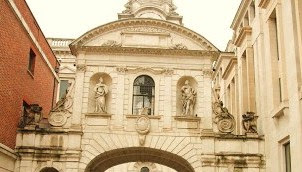 The gate is now an entrance to Paternoster Square, created in the early 2000s in a space that, in Medieval times, the priests used to walk in procession along Paternoster Row, reciting the Pater Noster, or Lord's Prayer, on their way to church.
Also in the square is a sculpture I especially liked, "The Shepherd
﻿ 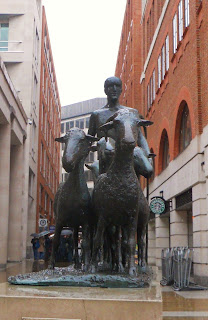 ﻿
﻿
﻿
﻿and the Sheep", going back to the times in the square's history when it was a livestock market.
Posted by Cynthia at 6:58 AM