"Jewel Box of the Prairie"

This is the story of the pairing of the unusual circumstances of two unusual men which resulted in an architectural treasure in a small town on the prairie in Minnesota.  The Farmers' Bank stands on the town square of Owatonna, Minnesota.

﻿﻿﻿   Carl Bennet's dad owned the Farmers' Bank in Owatonna, Minnesota. Son Carl's interests tended toward art and music, not banking, but, a dutiful son, in 1893 he graduated from Harvard and returned to Owatonna to take over the bank.  It was pretty unusual for those days in rural Minnesota for a young man to have a Harvard education, let alone an interest in the arts.     Carl agreed to run the bank, but he still had some creative ideas in his head.  He felt that the bank did not give the proper impression of solidness and service in its present building and set about finding an architect with a vision.
The second unusual set of circumstances involves the legendary architect Louis Sullivan, the "father of skyscrapers" incorporating that new building material--cheap steel, mentor to young Frank Lloyd Wright.  Sullivan over the course of his career designed many of Chicago's famous buildings. So, why would the "father of skyscrapers" agree to design a small bank out on the prairie of Minnesota?


Because of an economic downturn in the 1890s, Sullivan's career virtually ended and his life became a financial disaster. With no more work for him in the Big City, Sullivan agreed to a few small projects like Farmers' Bank in Owatonna.

By 1922, Sullivan's wife had left him, he had succumbed to alcohol and died, poor and alone in a Chicago hotel room.  He had no money for burial, so his former pupil Frank Lloyd Wright paid for his funeral and burial in a Chicago cemetery.  Ironically, he was buried with a very plain marker a short distance away from the ornate graves he himself had designed for Chicago's elite businessmen. 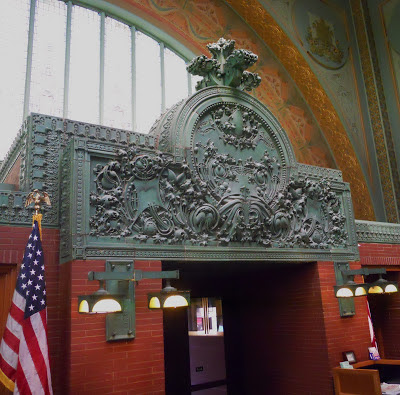 I'm wondering what the salt-of-the-earth Norwegian farmers of 1908 thought of the Owatonna Farmers' Bank when they came to town.
Carl Bennett lost the bank in the Crash in the 1920s.
It is now open as the Wells Fargo Bank and is a National Historic Landmark.