"True happiness is born of letting go of what is unnecessary.” ~Sharon Salzberg

Saying goodbye to 30+ years of living, growing deep roots, and raising a family has been an interesting process. Now that I'm pretty much through it I thought I would share some thoughts. 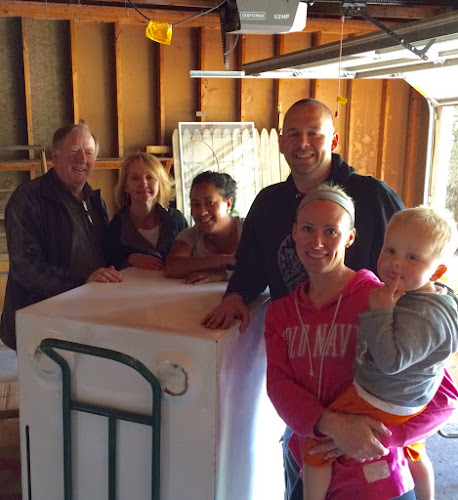 Bringing the freezer up from the basement was a major accomplishment. It was going to my daughter's house. She has four growing boys so no problem filling a freezer.

Getting it out involved removing two doors of the house and the top of the freezer--a necessity discovered only after reaching the top of the stairs the first time.

Back down, rest, remove doors, start the push-pull process of the ascent all over again...

That wasn't the craziest thing though. A ping pong table that went down the stairs 25 years ago had to be dismantled and destroyed to get it back up the stairs.

How did that happen???

We had eight days to sell my car, empty the house, and get it up for sale

as The Writer needed to be back in SC in two weeks.

I put my car on Craigslist (a new experience) and it was gone in 24 hours. We spoke with a realtor and 10 hours later had a buyer before the house had even been listed. The woman who wanted it, the mother of a neighbor, had admired my house for years because of my gardens and trees, so I know all will be cared for and enjoyed for years to come.

We had a garage sale and I gave away whatever was left after that. I now have no car, no house, and about 25% of the "stuff"I had a few weeks ago!

The quickness of it was a blessing, but it was also sort of stunning and I got overwhelmed at times. Oh heck, I still think about the tiny handmade baby clothes, the special childrens' toys, the sentimental items that had no use but holding memories, and get weepy! But I know the objects aren't the memories and the memories of those days are safely in my heart to keep forever.

Most everyone has to downsize in later life and I'm thankful that step is now pretty much behind me.

My best advice for getting through it ...

Posted with Blogsy
Posted by Cynthia at 11:05 AM