I've never done much geneology research, but over the past long winter I decided to see what I could find out about my English ancestory. Every family is a part of the history of the world and I like to see where my little piece fits into the whole of it. 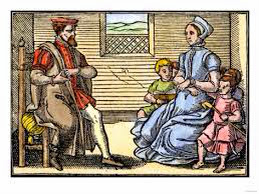 I knew only the name of my great-grandfather and was surprised how easy it was to go from there on the Internet. Well, it was easy to trace them on this side of the Atlantic anyway. Beyond that, things got quite confusing because of two men with the same name.

My 8X great grandfather, Thomas Graves, was born at Gravesend, Kent, before 1585. He married Sarah Scott in 1615 or 1617. Sarah was born in Hatfield Broad Oak, Essex, about 1595, and together they raised five children. Sarah's father was Christopher Scott, yeoman, of Hatfield Broad Oak. 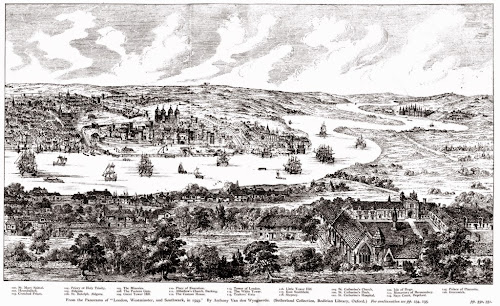 Thomas and family lived for a period of time in Stepney, London, in the area of St. Dunstans Church. The drawing above is of a Puritan family living in London about the same time. The etching on the right, by Antony van Wyngaerde (1550), is of the area of London that includes Stepney. Thomas was considered a well-educated man and an outstanding "engineer".

With other Separatists, Thomas left England in 1629, under contract as a land surveyor for the Massachusetts Bay Company, travelled with his wife Sarah, five grown children, and servants on the George Bonaventure, and landed on the Charles River in Salem, Massachusetts.

He lived in settlements in Massachusetts and on the Connecticut River for the rest of his life and is buried in Hatfield, Massachusetts.

The master's mate of The George Bonaventure was another Thomas Graves who made several subsequent voyages to America, but died and is buried in England. Beyond this, amateur genealogists have thoroughly confused and combined the two men, and sadly, I can't sort out many facts of his earlier life in England. 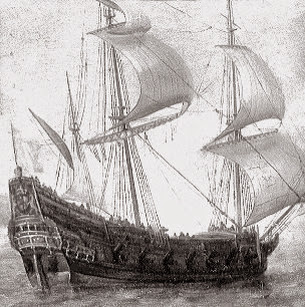 The Bonaventure, part of a fleet of six ships commissioned by Governor Endicott of the Massachusetts Bay Company, was armed with 20 pieces of ordinance and carried 350 men, women, and children, their goods, and 115 head if "cattle" (horses, cows, and oxen), 41 goats, and some rabbits. It set sail from Gravesend on April 24, 1629, and arrived in Salem around the 1st of June.

Thomas and his sons, along with several other families, periodically disagreed with religious practices and moved to other towns further and further into the frontier. They were relied upon for their skills in surveying and were instrumental in laying out and administering the towns of first Hadley, then Hatfield, Massassachusets. 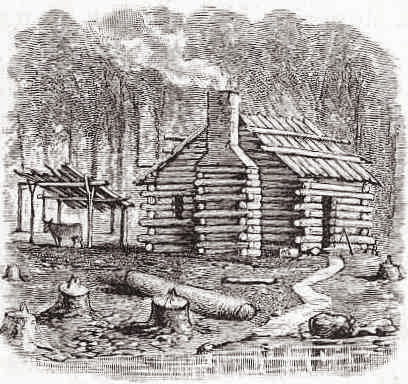 Traveling about 50 miles by ox cart with their possessions and animals, in October 1661, they halted by the Connecticut River and quickly built crude log homes for the winter. There were no saw mills to manufacture lumber, and the only way to saw planks or boards was by digging a pit and using a 2-man cross-cut saw, with one man on the top of the log, and one man working from below in the pit. In this way a few boards were made that could serve for tables and doors. Thomas, in his late 70s, and Sarah lived in this home with their son Isaac for about a year, when Thomas died. Sarah died December 17, 1666. 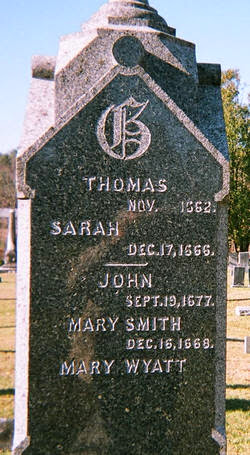 Grave marker in the Hatfield Cemetery for Thomas, Sarah, and John Graves.

In 1677, trouble escalated between the new settlers of Hatfield and the Indians of the area and a stockade was built around the settlement. On September 19 two of Thomas's sons, John and Isaac, were roofing a home for John's son outside the stockade when an Indian attack occurred and both men were killed. A total of twelve men were killed and scalped that day and 17 women and children were captured. John Graves was my 7X great grandfather.

I first started reading British history and literature when I was 13 and discovered historical novels in the adult section of the public library. It's been a consuming interest ever since. I will be in England again soon, soaking up some more, and I can't wait!

Posted with Blogsy
Posted by Cynthia at 9:03 AM