We live about 60 miles north of Charleston, South Carolina. In 1861, cannons blasted out the first shots of the Civil War from Charleston's Fort Sumter.

Sunday morning, out for a stroll on the beach, a former mayor of Folly Beach found the rusty pile and called authorities. One of the responding officers was a Civil War reenactor who recognized what they were and the danger of the situation.

The area was immediately closed off until the tide went out and safety procedures could be followed.

Members of the Charleston County Sheriff's Office bomb squad were called in and worked with the U.S. Air Force Explosive Team to detonate some at the scene that were too unstable to transport while others were taken to a nearby Navy base to be detonated.

had been the ones to find them? 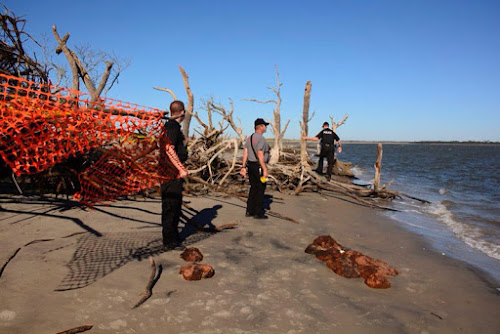 During the Civil War Folly Island provided the Union Army a staging area to fire on Confederate forts and for the Siege of Charleston. Gun emplacements lined the beach and thousands of Union soldiers camped on the island and besieged the city from July 1863 to February 1865 when the city finally fell. When it was over, the soldiers went home, abandoning everything where it stood. The equipment of war was soon covered over by sand and sea, and eventually forgotten.

By the beginning of the 20th century, Folly Island beaches were the city of Charleston's ocean playground. Today some of the best surfing on the East Coast is available on Folly beaches and in the summer they are covered with vacationers enjoying the sun and the sea.

I wonder if any of them ever stop think about the war that took place there and what might still be hidden in the sand beneath their bare feet!

Posted with Blogsy
Posted by Cynthia at 1:46 PM