Hurricane Matthew could have been much worse and we feel very fortunate. All around us are big old trees down on houses, on cars, on power lines, on the roads, but we only got large branches falling and they mostly missed the house. The only real damage was to our fence which was smashed in three places by blowing and falling objects. 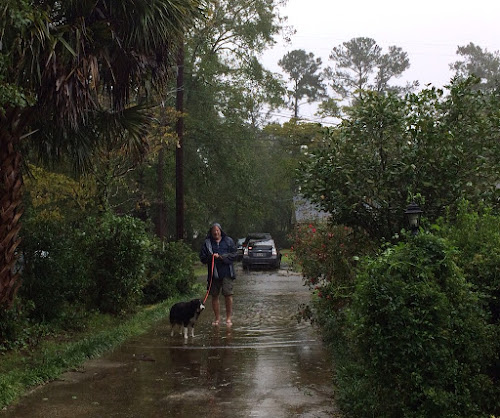 The hurricane began on Saturday with torrential rains and sustained winds that steadily increased, with stronger and stronger gusts, up to 65 mph. The wind got louder and louder and so did the bangs of things hitting the house.

When the "eye" of the storm reached us, the wind and rain just suddenly stopped and the sun even came out for a few minutes. The street in front had turned into a river and the yard a lake as 10 inches of rain fell.

When it began to blow again, the wind had changed direction and the air went from hot and humid to cold. When the wind switched trees really began to go down. 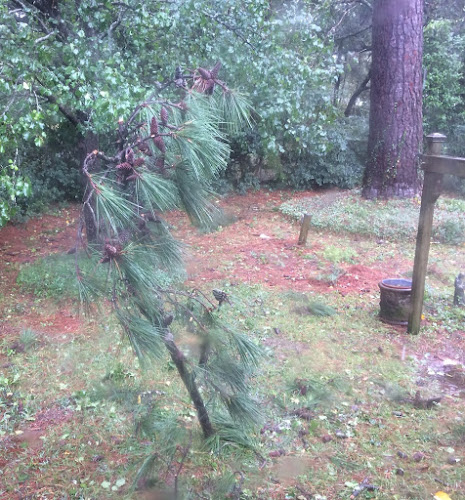 The end of this 3 1/2 inch branch was driven right into the ground by the wind. We were surprised to watch it continue to stand for hours through the biggest gusts. It's about 6 feet tall. 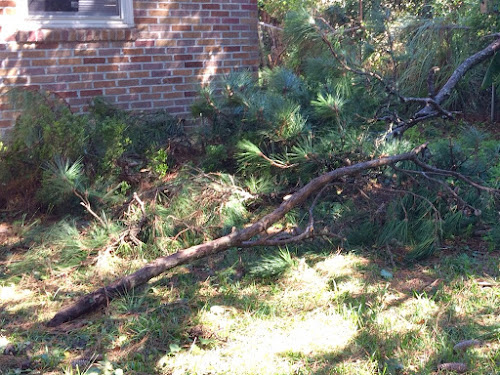 Here you can see why it stood firm.

See the dark pointed end on the left?

When we started cleaning up the yard and pulled it out of the ground, we could see what happened. It had been driven 12 inches into the ground! 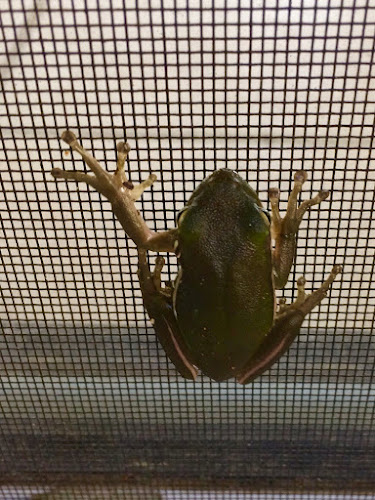 The wind continued to batter us all day Saturday.

Sometime in the late afternoon it began to abate and finally became just an ordinary wlndy day.

When I went out into the sunroom, I found this tiny frog hanging for dear life onto the screen door!

He is about the size of the end of my thumb. 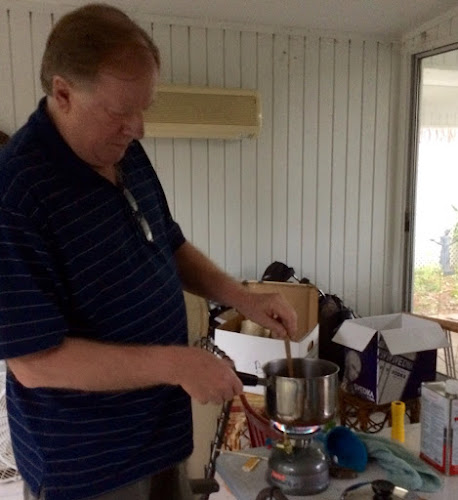 The chef kept us in tea and hurricane food* for the duration. Luckily we had this little one-burner camping stove to cook on.

After the hurricane was over Saturday, and much of Sunday roads were closed and no one was supposed to leave the neighborhood. There was a strict curfew of 8 pm with military vehicles and police enforcement. Everything was closed and boarded up anyway and roads were blocked with trees, so there was no reason to go out. We walked and biked our neighborhood to see how our neighbors had fared.

The most challenging part for us was being without electricity for three days. With no electricity, no tv or wifi, it was hard to get any news of what was going on or what had happened to the places in the storm's path. It felt strange to be so out of touch and isolated in our little neighborhood.

Even though we used them sparingly, we soon ran out of power on our phones. 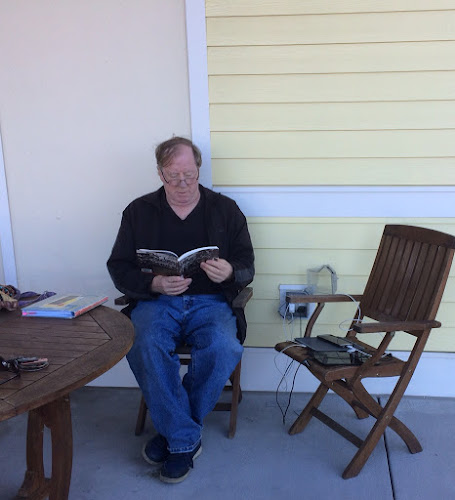 Yesterday (Monday) when we heard that two centers for charging cell phones had been set up, we set out to find one. None of the traffic lights were working and there were trees still down blocking the main highway but we were able to travel. The first charging station wasn't there, but the second one, a grocery store on Waccamaw Neck, was!

They had free coffee and allowed people to use the outlets inside and outside their store!

That was pretty exciting and we spent quite some time charging our phones and our iPads and sharing storm stories with others.

Slowly during the day other areas along the Neck got electricity and a few gas stations began to open.

Later on Sunday some in Georgetown began to get power, but not us.

Finally, last night at 9:00 our lights came back on!

Today we had hot showers, cleaned out the refrigerator and freezer, and tried to buy a few groceries as some of the stores are now open. They are open, but the shelves are pretty bare, especially the refrigerated and frozen food areas.

All the fallen limbs and branches have been cut up and cleaned from the yard and are ready by the road for removal.

So that's what I've been up to. Now that the yard is cleaned up (except for one giant limb which will require a tree service to remove) I'm looking forward to resuming normal life, reading blogs, and see what everyone else has been doing for the last five days.

Note: If the dates seem confusing, I wrote this last night but it didn't publish until this morning. Sorry about that!

Posted with Blogsy
Posted by Cynthia at 7:36 AM